This exhibition, which revolves around Pablo Picasso, Jean Dubuffet and Alberto Giacometti, offers works of an intimacy, scale and aesthetic that is utterly personal while also of museum calibre. The Picassos alone are worth the trip

Edgar Degas’ delightful, unidealised Petite Danseuse de Quatorze Ans (Little Dancer Aged 14), c1879-81 (this one cast in bronze in 1922) greets the viewer at the entrance to the exhibition. Wearing a muslin tutu and a satin ribbon – Degas fooled around with mixed media long before it was commonplace – feet in fourth position, shoulders and arms stretched tautly back, chest forward, head upturned, she is half defiant street coquette, half budding ballerina, a “petit rat of the Paris Opera”, and determinedly, precociously present. Much maligned in her day, she is a fitting opening act to the always absorbing, once radical, masterworks within.

Curated by Robert Storr, the exhibition revolves around Pablo Picasso (1881-1973), Jean Dubuffet (1901-85) and Alberto Giacometti (1901-66) with support from Susan Rothenberg (b1945) and five of her strange, lush, equestrian paintings from the 1970s that focus on painting as image, image as painting, two Willem de Kooning (1904-97) women, a painting and a drawing, and Degas’ dancer. It offers works of an intimacy, scale and aesthetic that is utterly personal while also of museum calibre, a credit to Abigail and Leslie Wexner’s discernment.

The Picassos alone are worth the trip to Columbus, a worthy addition to the list of recent exhibitions featuring the artist in New York at the Metropolitan Museum of Art, Pace Gallery and Gagosian. The paintings here, from 1898-1959, mostly depict women who were his muses, wives and lovers. They form an emotional as well as formal autobiography, his version of Life with Picasso: Olga Khokhlova in neo-classical style, the one with her and their son Paulo of particular charm; Dora Maar cut up into sharp, exquisite Cubist fragments; Françoise Gilot as a contorted nude in a Matisse-like interior; and Jacqueline Roque, often in the guise of an updated old master artwork, here as a seated nude, a motif that Picasso was fond of and used repeatedly.

One of the most stunning images in the exhibition is another iteration of that theme, a reclining Marie-Thérèse Walter in Nu au Fauteuil Noir (Nude in a Black Armchair), 1932, all swooning, swollen curves and circles nested within circles, voluptuous, languorous, tender. A few small sculptures are happily present, an area of the Picasso canon that is relatively unexplored, and includes an eloquent upraised arm of gouged and rippled bronze, perhaps in triumph, perhaps in supplication, fingers splayed as if grasping at air, at the frustratingly elusive and ephemeral, bringing to mind his comment that he wanted to “paint like a blind man …”

Ascending the ramp of Peter Eisenman’s quirky, at times recalcitrant but wonderfully original museum building will take you to more than two-dozen Dubuffets in an upper gallery. They represent the artist’s development from 1944 to 1963, from art brut to his 12-year Hourloupe series (a term he coined) that began in 1962, its lively, familiar, red and blue doodled patterns linked to surrealism’s automatic drawing, an early example of which is the large painting, La marée L’Hourloupe (The Hourloupe Tide), 1963. He admired art that was untaught, unrefined by academies and bourgeois taste, drawn to non-European traditions, to nature, art by children, the mentally disturbed and others outside the constrictions of mainstream culture.

A ferocious experimenter, Dubuffet’s use of materials was revolutionary, mixing oil, sand, gravel, tar and other unorthodox substances with paint, trowelling the blend in thick layers on to his support. He then attacked them with the tip of his paintbrush, as in the marvellous Bertelé, Chat Sauvage (Bertelé, Wildcat), 1946, and Dhôtel (1947), a portrait of the novelist André Dhôtel, a series of likenesses created solely from memory. Another highlight is the 1950 Aubergine et Lie de Vin (Eggplant and Wine Dregs). Conventional in media, executed in oil on canvas, titled after the colours of the painting with a dash of humour, Dubuffet challenges – as did other artists of the period – contemporary notions of beauty, creating his own potent formulations for an alternative aesthetic.

His works on paper are also astonishing, irresistible, among his most significant contributions to the history of art for their range of textures, imaginative combinations of unlikely materials and processes, and a deftness of touch that could be both abrasive and also extremely delicate, as evidenced in Corps d’Homme Nu (Male Nude Body), 1957, and Homme aux Mèches (Man with Locks of Hair), 1958.

In the topmost gallery, illuminated partially by natural light, are installed the Wexners’ Giacometti sculptures, a kind of quixotic, existential cadre. The eye is drawn immediately to the magnificent, wasp-waisted Femme de Venise IV, made for the 1956 Venice Biennale, placed strategically before one of the windows. At four feet, the tallest sculpture present, it is less attenuated than the other standing figures, its lumpy, vigorously worked, green and earth-coloured bronze flesh enhanced by the addition of paint, something Giacometti rarely did. Several of the sculptures are tremulously modelled busts of his brother Diego and superb, as well as one remarkable painting of him in his studio. One bust is of his wife Annette, another favourite model, that is a more recognisable portrait, but nonetheless equally poignant in its sensitivity. A standout from the Walking Man series, among his signature works, is Homme qui Marche sous la Pluie (Man Walking in the Rain), c1948, the gaunt, stick-like figure leaning forward, one foot half-lifted off the ground, as if struggling to advance against some invisible restraining force. It is a haunting image, emblematic of the human condition, postwar malaise, of desire and despair and humanity’s stubborn, uncanny will to endure. Equally haunting is the sculpture of a loping, severely emaciated dog, its awkward grace of body and limbs heartbreakingly beautiful, an appropriate companion for the artist’s walking men.

While the exhibition was rewarding in itself, not too much, not too little, just absolutely right, it was an especial joy to see it at the Wexner Center, where, although well-attended, viewing was not a contact sport with no need to fight through crowds. I wish some of our illustrious metropolitan museums might take note. 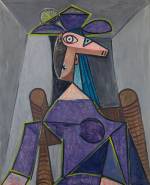 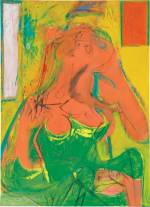 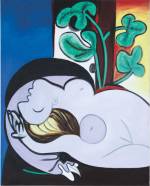