The largest exhibition of Bacon’s paintings ever held in the north of England, it takes as its curatorial framework the spaces the artist painted around his famously brutalised figures – outlines of cubes, rings, platforms and provisional rooms 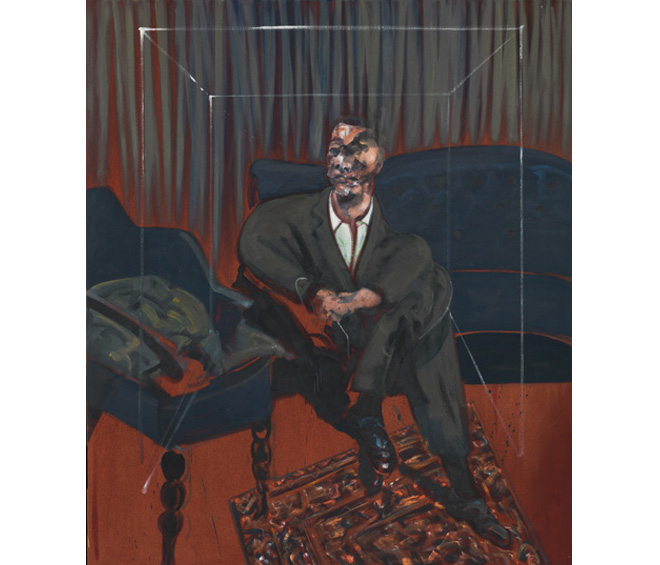 From howling heads to the abstract meat fetishes of his later work, Invisible Rooms is organised into thematic, roughly chronological sections, that chart the evolution of Francis Bacon’s spatial demarcations. Crucifixion (1933) – a small, early painting of a skeletal figure on the cross – provides a key to the significance of the over-arching theme, showing how the libidinal violence that marks the imagery of Bacon (1909-92) is also fundamental to his use of pictorial space. The outline of the room begins at the corners of the canvas, shrinking to a vanishing point that penetrates the tortured figure. Perspective: another technique for exacting injury, another tool for baiting the wound.

In one of Bacon’s best known triptychs, Three Studies for Figures at the Base of a Crucifixion (c1944), a trio of toothed, phallic monsters are set against a vivid orange backdrop. Here, the outlines of the rooms serve to wall these creatures in, ramping up the intensity. Ascension? Not a chance. Bacon offers no horizon, no escape, revelling instead in the dark erotics of flesh under duress. This febrile potency of entrapment is made explicit in a section of the show titled Cage, where, alongside a number of shrieking, boxed-in heads, hangs Chimpanzee (1955), in which an incarcerated ape shakes itself in primal frenzy.

It is a mark of Bacon’s influence that his rabid monsters, eerie scene-setting and theatrical meat-fests have become popular tropes of psychological turmoil. We now return to such imagery through the lens of David Lynch, whose cult series Twin Peaks takes Bacon’s surreal operatics to the point of kitschy psycho-drama, and director Ridley Scott, who based the priapic monsters in sci-fi horror film Alien on those in Three Studies. While this attests to Bacon’s enduring status, it places his most overtly dramatic works in the shadow of Castle Camp-Noir: entertaining, yes, but largely drawn of poison.

At Tate Liverpool, then, it is the less familiar works that pack the most visceral punches. Study for a Portrait of P.L., No. 2 (1957), on loan from the University of East Anglia,  is a prime example. A sickly pink torso is boxed into the centre of the canvas, painted about the groin in broad, ragged strokes, so that the legs appear not so much unfinished as ripped off. The mask-like face is painfully exaggerated, with swollen brow and hollow cheeks, but held back from descending into Bacon’s trademark psychedelic miasma. Eschewing his penchant for the papal palette of deep reds, emerald greens and ceremonial purples, the background here is painted hospital green – a pallid colour that combines with Bacon’s mutilating brushwork to nauseating effect.

Tate curators Kasia Redzisz and Lauren Barnes, along with Ina Conzen of Staatsgalerie Stuttgart – where the show will tour when it closes in Liverpool – have constructed a relatively anonymous curatorial framework, allowing Bacon’s development to set the tone. There are moments, however, when this comes unstuck, most notably in the introduction to two works from Bacon’s Man in Blue series (1954), on show under the vaguely titled section heading Subject/ Space. On both canvases a suited figure sits at a desk in a dark blue room, exuding the menace of banker and brute in equal measure. Tate speculates that these figure are based on Bacon’s lover, Peter Lacy – Lacy destroyed many of Bacon’s works in drunken rampages, as well as assaulting Bacon himself – explaining that they depict the “isolated male figure”, and communicate “a sense of anxiety and hopelessness”, resulting from the “illegality of homosexuality”.

For a painter who once suggested the government “bring back hanging for buggery”, this is a s anitised reading. These paintings appear neither “anxious” nor “hopeless”: they emanate a colossally injurious atmosphere, channelling the erotic terror of the businessman – a terror far more palpable to the contemporary viewer, say, than the histrionic popes displayed beside them. When Bacon’s paintings are in the ascendency, it is as if they are dancing in an open wound: they offer no judgment, no moral, and they certainly table no plea for sympathy. Remarkably for an artist dedicated to painting fetishised, mutilated masculinity, this is the only mention of sexuality in the entire exhibition – what a shame, that this maker of difficult, electrifying erotics should be subjected to such a vanilla revision.

Study of the Human Body  (1982), on show at the end of the exhibition, counts among Bacon’s most absurdly sexual works. A body from the waist down stands proudly on a plinth, genitals out, wearing cricket pads and with buttocks for a torso. This ridiculous figure captures with dark humour Bacon’s fetishising of masculine dominance. Not an ape, a pope or a businessman, but a distinctly normal “master” – and a subject whose very normalcy brings to the canvas its own shudder of horror: the gentleman savage of the English county green.

It is now par for the course that institutional shows dredge up archival ephemera, and a selection of sketchbooks and drawings has been duly assembled. Bacon “denied making preparatory sketches”, Tate tells us, and the overwhelming purpose of this section appears to be to prove this a lie – a bubble-bursting ambition, which suffers the deadening consequences of demonstrating the most humdrum aspects of Bacon’s workings. (The printed transcription placed beside an illegible diary entry from 1958 is a prime culprit, revealing an instruction to “concentrate entirely on studies of human figure” – one wonders what insight this can possibly offer us to an artist who focused, for more than six decades, on little else.)

Among this generic ephemera is one illuminating document – an undated newspaper clipping of two boxers in a ring, one standing fist raised, the other lying prone on the mat. Bacon has painted a cube tight around the standing man, and blue wavy lines over his legs, enhancing his musculature. It is the victor, and not the victim, who is exulted by this invisible room. “Pity the meat!” wrote philosopher Gilles Deleuze, in response to Bacon’s taste for brutalised bodies. But within this show, the question of how we should feel with regards to Bacon’s subjects is brought to the fore – whether to pity or fear, abhor or fetishise, and most importantly of all, how to deal with the excited shock of standing before his paintings and feeling both.