The exhibition Francis Bacon: Five Decades showing 52 major works in the Art Gallery of New South Wales Sydney, is the first exhibition of the artist ever to be shown in Australia.

Four Australian State galleries have significant examples of his work from the 1940s to the 1970s but they have never been shown together.  The premise of the exhibition has been to foreground the facture of the paintings rather than presenting the narratives that a thematic installation privileges. Bacon himself hated the idea of narrative in painting but more importantly the structure of his paint changed dramatically roughly every ten years and this hang celebrates these often uncanny moves. The unusual materiality of the paintings can be the most exciting aspect of a reconsideration of his work.

Bacon’s painstaking paint application of the mid-1940s contrasts strikingly with the open dry overall brushwork of the 1950s where figure and field dissolve and bleed into each other. In the first room we have three individual studies for the figure based on photos of Eric Hall, Bacon’s patron and lover, Figure study I (1945–46), Figure study II (1945–46) and Figure in a landscape (1945). There is also Study for a figure at the base of a crucifixion (1943–44), Head I (1947–48), Head II (1949) and Study from the Human body (1949). All but one of these paintings relate to crucifixion themes, but more importantly they establish some fascinating technical innovations that will be contrasted with the next room of 1950s paintings, that are much more loosely painted. Immediately after he moved into Rees Mews in 1961 the work changed again. The overall brushwork and vertical striations disappeared and the figures become concentrated sculptural forms isolated against flat fields of colour. Significant changes in colour and paint application also occur in the 1970s and 1980s, although these may be more subtle.

Encountering works often done as a series in the same room brings out some surprising features in the techniques Bacon invented as he went along. The Belfast painting Head II (1949) was one of the first to be done on the back of a primed canvas. Head I (1947–48) from the Metropolitan in New York was painted on board and while the image is striking the texture is relatively conventional except where Bacon modelled the teeth and the ear to a low relief. Head II painted on the verso on raw linen had been layered up over several months. This was not something Bacon ever did before or since. His paintings either came off rapidly or clogged and had to be destroyed. This was the exception. The paint surface was built up to what he described as being like Rhinoceros hide. Looking closely at this in Belfast I wondered at the strong horizontal striations that make up this hide like structure.

I equated it with the dry crusty underpainting of Monet’s late waterlilies in the Orangerie. Monet finished the paintings with relatively liquid strokes of paint that skipped over the crust below making the resulting swirling lines seem lighter and fractured as the brush skimmed the high points of the impasto beneath. The horizontal corrugations in the Bacon however seemed incomprehensible. Surely Bacon would not have painstakingly laid in the horizontal underpainting then brought the verticals in at the end? None the less as with Monet the effect was to make the vertical strokes of the curtains seem transparent as they skipped the corrugations. In his case the paint was not liquid but very dry probably with lead white that used to have a very sticky solid texture.

It was only when we unpacked the beautifully sensual Melbourne painting, Study from the human body (1949) that I discovered how the corrugations had occurred. This painting has much thinner paint but it was also painted on the verso. You can see raw linen as part of the colouration of the curtain near the edges of the canvas. Towards the middle of the composition where the curtains open to reveal a black void the paint starts to build up and the same corrugations begin to show.  What now became apparent was that the dry thick paint was pulled vertically down the canvas and as it moved over the surface it caught the weft of the canvas leaving horizontal ridges and when the vertical strokes were repeated they accumulated thicker ridges till the canvas disappeared. This was exactly how the corrugations in Head II were created. Bacon made no horizontal moves at all – everything is an interaction of the vertical brush stroke and the weave of the canvas.

In 1951 Bacon’s childhood nurse Nanny Lightfoot who had looked after all his needs for the best part of 40 years died removing the most stable point in his chaotic world. He was subsequently on the move travelling to Monaco to make money at roulette or to Africa where his family had moved after his father’s death. He travelled with his new lover Peter Lacey to Tangier. Lacey it seems was an enthusiastic sadist to Francis’ less enthusiastic masochism. It was a very unsettled and chaotic decade. He was mostly without a permanent studio and stayed with various friends during those years. Most of the paintings were created in series for specific exhibitions and were often hastily made with thin dry paint that revealed large areas of raw linen.

In the exhibition there is a wall of figure studies inspired by Muybridge, these conform to that apparent speed of execution with overall vertical strokes that pass through the emerging images of human forms. On closer inspection however the spontaneity is undercut by surprisingly laboured touches of paint. Two examples that exemplify this observation are; Study for crouching nude (1952) from Detroit and Untitled (figure) (1950-51) from the Bacon Estate. The crouching figure from Detroit is perched on a strange frame or apparatus that occurs continuously in Bacon’s staging of the body. The figure itself is hinted at with the use of very little paint and virtually no drawing of forms. The approximation to flesh colour in the body area is exposed raw linen. However on close inspection the few sparse brush marks that suggest the body turn out to be built up with slow stiff brush strokes. The paint has been mixed with sand making it bulky but also very slow when it was pushed onto the rough linen surface. I have speculated that the sand, that is far more common than museum captions suggest, is a way to reduce the risk of oil bleeding into the raw linen but it also has the effect of undercutting the idea of a loose free gesture.

This figure casts a blue-black shadow, which unlike the body casting it is very substantial. (see details of Study for crouching nude (1952)). The paint has been loaded up with sand and I suspect stand oil has been added since it has that sticky glossy bulk typical of that type of medium. The shadow looks like a sculpture of a shadow rather than the absence of light whereas the figure simply dissolves into the field. Bacon once said that shadows are like our ghosts but of course as an avowed atheist he did not believe in things like that. Later particularly in the 1970s the shadows look like fluids seeping out of the body or else they take on the feel of emanations of the figure. Bacon had an old book of photos by Baron von Schrenk Notzing that purported to show ectoplasm appearing during séances.

The other painting, Untitled (figure) (1950-51), is more extreme. From a distance we can form the impression of crackling energy happening within a typical linear frame or cage. I am irresistibly drawn to think of Star Trek when Scotty beams up Spock and the figure glimmers into being out of nothing. The impression is again of very thin fast strokes of paint that leave much of the canvas exposed. From close up it becomes possible to see that the appearance of the figure has been summoned up by thickening short patches along the vertical stripes of the curtain where the lines pass through selected points on the manifesting body. It is our eyes that join up these dots to create the image of a figure. It is as if the vertical striations represent energy that brings the body into visibility. The head of the figure is the most surprising bit of painting. From a distance it gives the impression of a shadowy head or skull but it turns out to be a heavily modelled relief of a head. The ear is the most prominent feature. It looks more like laborious modelling in putty than spontaneous impasto brush marks.

Bacon was at pains to assure us that he had learnt nothing about painting from tradition and made it all up as he went along. These works from the 1940s and 1950s clearly bear out this assertion. No one who had an idea about paint in the western tradition after Titian with its emphasis on the fluidity of the gesture and overall consistency of quality would ever have done these things. What is magical is that somehow presences are summoned up and when it works they get straight under our skin. As Bacon would say they impact directly onto the nervous system, they are never an illustration of appearance.

In the following decades Bacon continued to invent new ways of making this happen; applying acrylics and oil paint with the brush, palette knife, fabrics, rollers, spray cans, applying the lids of paint tins and tubes to create circular motifs, incorporating dust and sand. In the book of the exhibition I have tried to demonstrate that this is part of an indexical realism that he espoused. Most of these innovations leave a trace of the real in the surface of the canvas. It is partly this that brings the sensation of the thing onto the nervous system. 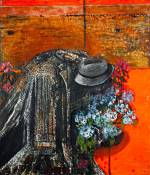 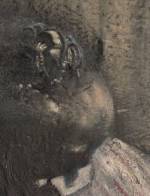 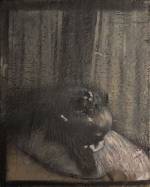 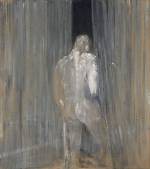 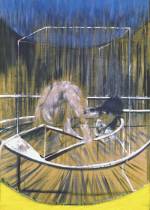 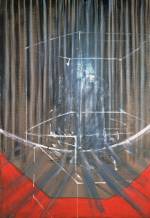