Rachel Howard is committed to the material properties of paint and the manner in which they can be manipulated to insinuate ideas and feelings. The physicality of the creative act and the intensity of pigments are both central to her art practice, on which she is utterly dependent.

“Not painting,” she says, “is not an option.”1  Having used house paint since 1995, Howard’s new exhibition, Northern Echo, at Blain Southern in London, shows a return to oil painting, where she explores the medium by applying and removing paint, leaving images that hover between experiential episodes and resemble manuscripts or documents. Historic traces and freshly applied marks interact simultaneously; they are annotated vestiges in tune with memory and the subconscious experiences that interact with quotidian life. The painting process can be seen as a metaphor for the state of flux in life; faint images or suggested places are cast among the carefully nurtured surfaces of the new works. Insomnia (2013) conveys a sense of veiled memory, where an air of melancholia is conjured.

From 2005-09, Howard worked on her first commission, Repetition is Truth – Via Dolorosa. Via Dolorosa, of course, refers to the street in Jerusalem where Christ walked, bearing the cross, towards his crucifixion. Howard’s 14 paintings reference the Passion, but the series was, in fact, prompted by the publication of appalling photographs taken inside Abu Ghraib prison in Iraq. Howard’s work in 2007 was made following the death of a friend to suicide; it sought to examine the taboo surrounding the taking of one’s own life. Indeed, Howard gravitates towards morbid aspects of life. She carried out research using forensic magazines, choosing to make rapidly executed drawings as the basis of her painting. Having attended a Quaker school from the age of 16, Howard is now an atheist, concerned with present-day suffering rather than religion. In her 2011 exhibition, the artist used as its title, Folie à Deux –the clinical definition for “a psychosis in which delusional beliefs are transmitted from one individual to another to explore human experience”. Cage-like grids are created by allowing gravity to determine the images in works, where the heavy pigment from gloss paint spills down the canvas like a torrent of emotion unleashed.

Howard’s works occupy a curious limbo where emotions and external phenomena interact. She is apologetic at the suggestion that her works are melancholic; though she recognises that in creating works of this ambience, the very act of creation prevents her succumbing to depression herself.  She admires the work of John Bellany, whose profound and religious work in an expressionistic mode is unique in British art. Bellany, who suffered severe depression for the last six years of his life, said he believed that depression was often the wrong word (it was, he said, so often mental exhaustion). “Melancholia is the inevitable flip side of the creative spirit, which takes great courage and energy, like giving birth,” he said.2 The art critic Sue Hubbard wrote of Howard’s Suicide series (2007): “The creation of these ambitious canvases is a psychological and physical battle, which demonstrates that there is still a role for emotionally articulate art that has something important to say about the poignancy and tragedy of the human condition.”3 In formal terms, Howard’s recent work employs a subtler language than that of Bellany: an exploration of the area occupied somewhere between figuration and abstraction.  Here, Howard creates an interchange between background and foreground, enabling peripheral aspects of a view – physical or cerebral – to be endowed with gravitas and meaning.

Patterning using a monochrome or reduced palette is explored in Northern Echo. In this, drawing plays a key role. Howard explains the role of drawing in her practice: “Drawing for me is drawing my thoughts, realising and giving clarity to even the tiniest of ideas. Also the pure enjoyment of the materials, the ink, the paper, the way the pigment is absorbed, the weight of the ink on the brush. I’m influenced, like many artists in the past, by East Asian calligraphy, writing as drawing, drawing as writing.”4

Nurturing the surface of the painting is for her an obsessive activity, sometimes taking place over months or years. She describes her departure from the use of gloss paint to the use of oil paint in the past three years: “With this new body of work now an exploration of oil paint and the gentle shift that occurs [from] abstraction to figuration and back again, a sway, a shimmy, and a dance between the two. I used the drawn line as a pairing back to language, to the word, bleaching the colour out, the barest amount peeking through, a suggestion only, avoiding the distraction of colour that can provoke so much. The line (in the smaller works) is the word and the emotion. But I also unpicked the line, unstitched the line, made it unstable, broken and uncertain, creating an unstable, precarious surface.”5

With paint, Howard uses abstracted gestures to create an appropriate place on which forms can be placed. The application of marks can be seen to represent the artist’s assertion of “self”, the ownership of the picture plane, not unlike a theatre space, and a safe place in which to explore intensely private issues. It might be tempting to equate the nurturing approach to the painterly surface to a female propensity to nurture life, but although Howard is a stated feminist, she does not see her work as gender based, and considers herself first and foremost as a painter.

Muted colour is used in preference to a rich palette, although this should not be seen as an aversion to colour; indeed, she described her experience of the Francis Bacon retrospective at Tate Britain in 2010 emotively: “The oranges and the reds in his paintings made me so light-headed, I felt faint. The same happened on my recent trip to see the beautifully curated Twombly and Poussin exhibition at the Dulwich Picture Gallery. I think of colour as a seducer, a guilty pleasure. It’s a great tool to move the eye round the canvas, not allowing the gaze to rest.”6 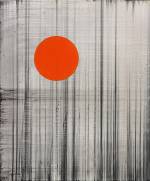 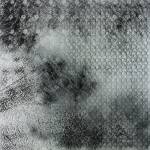 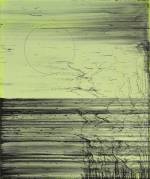