Fighting History, an exhibition examining 250 years of history painting, has received a torrent of abuse from the British press. It has been accused of being “feeble,” “terribly presented” and “frustrating.” Surely, it can’t be that bad?

History painting, which broadly includes historical, biblical and mythological scenes, was the most highly regarded genre in the 18th and 19th centuries. On the one hand, it moralised, idealised and educated while showcasing an artist’s talent for rendering human experience in the most epic terms. But it also provided artists with a legitimate excuse to paint nudes, which resulted in certain stories, such as Susanna and the Elders, becoming fetishised. In the hands of the majority of male painters, this biblical tale became less about the injustice done to a young woman, than an excuse to paint older men leering at a young, naked body. History paintings, then, are laced with hidden meanings, contemporary references and excuses to paint flesh, death and riches. With so much scope, Fighting History should be a hugely colourful and revealing exhibition.

Sadly, the first room of this exhibition is not promising. Visitors are plunged unapologetically into a stark juxtaposition of old and new that does none of the artworks any favours. An unremarkable brown canvas by Robert Edge Pine (the snappily titled John de Warenne, 6th Earl of Surrey Giving his answer to the King’s Justices on the Enforcement of the Statute of Quo Warranto, 1278, painted in 1771) looks rather sheepish next to Dexter Dalwood’s gaudy, pop art-inspired account of The Poll Tax Riots (2005).

The second room displays some interesting works, but not only does it also muddle old and new, it seems to have nothing to say. Several works, including a moving and macabre photo by Steve McQueen of the “Hanging Tree”, explore African American history and civil rights. Oddly, these are hung next to Walter Sickert’s Miss Earhart’s Arrival and The Centurion’s Servant by Stanley Spencer.  It’s hard to know what to make of this, or to get any sense of what the curators are trying to say, other than, here, in the broadest sense, are some history paintings.

However, there are some gems hidden in the mix that provide moments of respite from the confusion. Richard Hamilton’s The Citizen is a masterpiece of moody political painting. A barefoot prisoner with a beard and long black hair looks out from the canvas; the brown patterns behind him represents excrement smeared on the walls. Is he a mad man or a messiah? He is, in fact, an IRA prisoner. In protest at being classified by the British government as criminals, rather than political prisoners, the inmates stepped up their protests in the 1970s. They took to wearing blankets instead of prison uniforms and lived in squalor. Hamilton painted three such diptychs of the conflict in Northern Ireland and the complete set would have provided a dramatic highlight to this exhibition.

In the same room as The Citizen hangs The Death of Captain James Cook, 14 February 1779 (c1798) by the German painter Johann Zoffany. A dynamic piece that was never finished, it imagines the moment Cook was killed by a group of Hawaiians in a confrontation on a beach as the captain attempted to kidnap the island chief. Zoffany, who almost joined the expedition, used items brought back from the voyage to get every detail of dress right, such as the headdress and cloak of Cook’s assailant. There are hints of classical influences in the poses of the protagonists that allude to The Dying Gaul and the Discus Thrower. However, there is no stoicism or heroism here. Cook meets his end in abject terror.

While certainly a scene from British history, if non-British artists are being included in this exhibition, which we are led to believe sets out to explore British history painting, then why not also include a painting by French artist Paul Delaroche, who relished painting scenes of the British monarchy’s dramatic past. The Princes in the Tower (1831) and The execution of Lady Jane Grey (1833) would make perfect additions. The latter is housed just down the road. Or why not include works by Rubens or Artemisia Gentileschi?

The sound of Jeremy Deller’s film of a re-enactment of The Battle of Orgreave permeates the second half of the exhibition. A room full of photographs and artefacts accompanies it, so that the exhibition space briefly transforms into a miniature museum about the 1984 miners’ strike. A jacket with a short explanation of the significance of pin badges to protesters and police alike is a fascinating detail that throws an anthropological light on the events, but seems oddly placed in this confusing exhibition.

The next room, entitled The Deluge, is dedicated, as you might expect from the title, to the biblical flood. If you are despairing by now, take comfort in the fact that it is the final room and that it almost – almost – makes sense. Here is the only JMW Turner in the exhibition, which seems strange given the master’s considerable output of history paintings and his uniquely British take on the genre. Typically for Turner, the human action is dwarfed by the swirling, tempestuous landscape. It would be worth paying the £12 ticket fee to see just this one painting, except that it is usually on display for free. And this is the case for the majority of the works in this exhibition. Again, one of Dalwood’s bright canvases is terribly placed next to another, much older painting, in this case Turner’s, an unfortunate decision that brings the exhibition full circle.

Fighting history might have benefited from a chronological treatment. As it is, the whole display seems rather vague and disorganised from start to finish. If this exhibition achieves anything, it is to highlight that history painting has survived the 20th century, but beyond that, it is difficult to grasp at any real insights into one of the most fertile areas in art history. 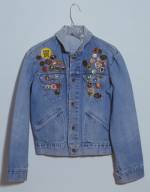