The fascinating Italian modernist discovers his humanity through theatre. 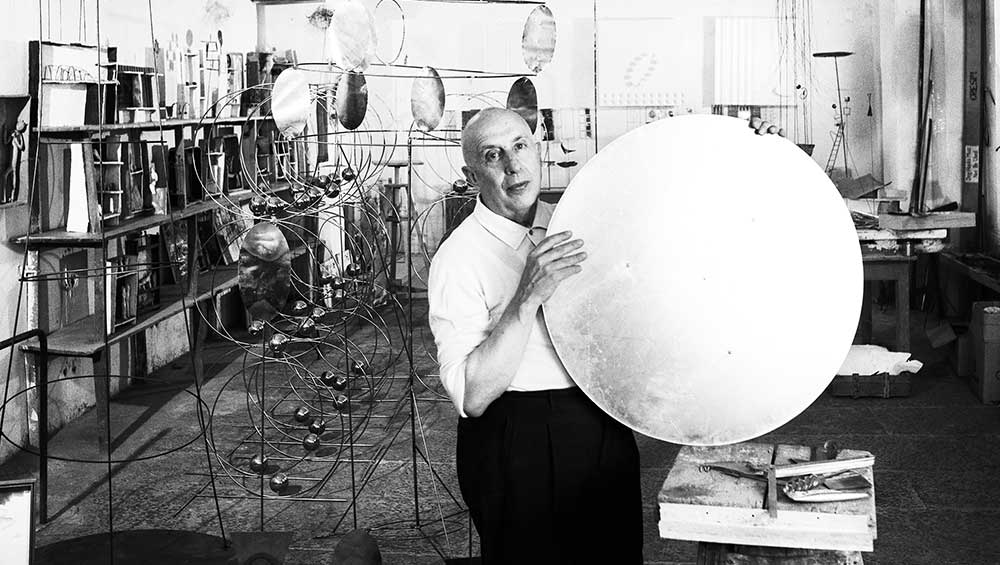 Fausto Melotti (1901-86) made his stage debut at an advanced age. In 1982, the Italian sculptor was commissioned to design sets and costumes for a ballet set to Stravinsky’s Song of the Nightingale. A couple of forays into opera followed. For the octogenarian artist, this call-up may have felt like a long time coming.

Melotti had spent a not insignificant part of five decades dreaming up imaginary theatres. His Teatrini – a series of minute fantasy stages, usually made from ceramic or terracotta and often populated with miniature props and freestanding figures – bear a superficial resemblance to the curiosity cabinet-like works of Kurt Schwitters and Joseph Cornell, three-dimensional collages enclosed in boxes. But while those works evoke private worlds, Melotti’s pieces represent one of the most public-facing art forms. Theatre comes alive only with an audience. 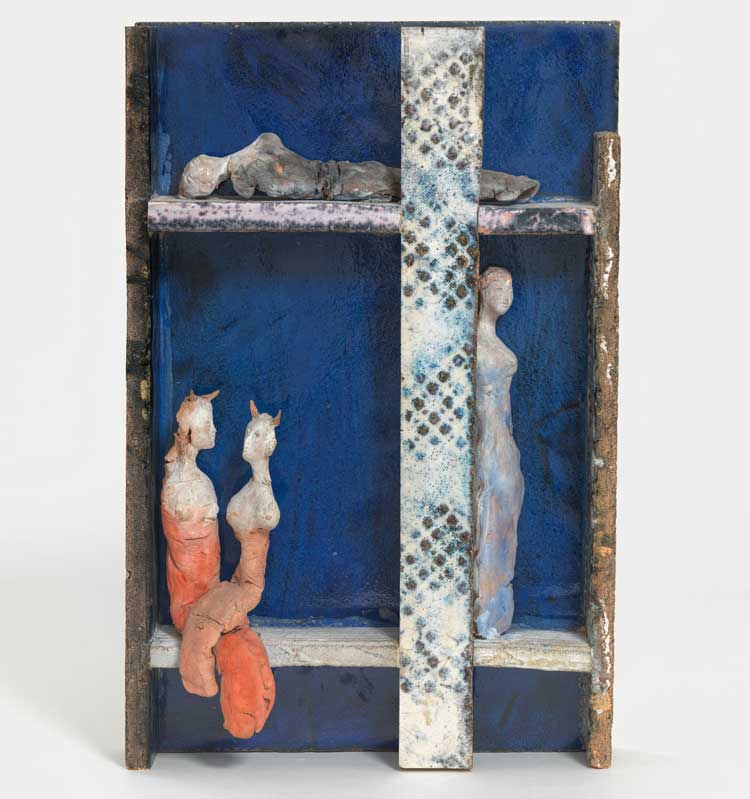 At Hauser & Wirth in London, seven of them sit within a specially designed alcove pitched somewhere between a turn-of-the-century theatre and a gaping maw. One of them, Le Mani (1949), sees two disembodied hands sitting on an infernal red sofa, next to a narrow, weathered brass sculpture. Another, Incendio Bianco (White Blaze), 1961, has two tiny, featureless ceramic figures perched on a sofa, while next to them a plume of tissue paper spurts from a chunk of pumice. Is the house about to catch fire? 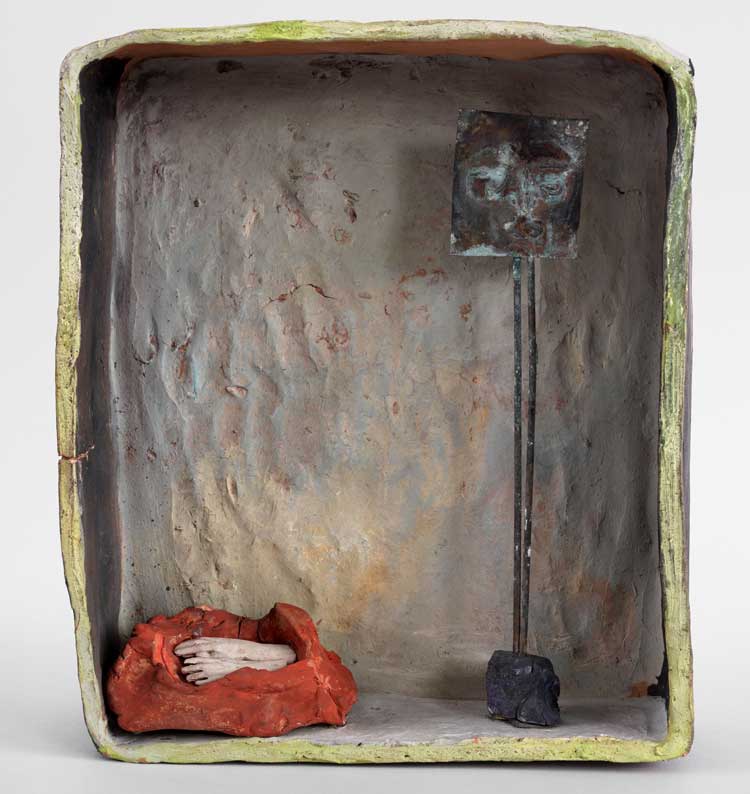 These works have an astonishing rawness. Ceramic is an inexpensive, craft material, but one that can be finished into works of surpassing elegance. Melotti did no such thing. The walls of the Teatrini are uneven, chipped and discoloured. They feel like unearthed artefacts. Melotti is sometimes claimed as a progenitor of arte povera, the 1960s Italian movement that used “poor” materials to challenge art’s traditional hierarchies.

Melotti took this further than many of these postwar conceptualists, readily embracing the most mundane household products and transforming them, as if by magic, into dramatic compositions. Along with the Teatrini, Hauser & Wirth has a beguiling collection of these sculptural works. The striking Tabernacolo Violato (Violated Tabernacle), 1980, has an emaciated, exhausted-looking figure imprisoned in a cardboard box, coated with tin foil. It takes skill to turn such everyday materials into a site of horror.

Melotti had not always been so rough and ready. His first solo exhibition, at Milan’s Galleria Il Milione in 1935, featured a series of sleekly modernist metal sculptures. The futurists seem like cavemen by comparison. Melotti’s shining orbs, machine-like frames and curvaceous abstract shapes still look like the art of a tomorrow that never became today. They were the project of a polymathic mind: before embarking on his artistic career, Melotti had studied music, mathematics, industrial engineering and physics. Contemporary critics praised his work for harmony and counterpoint, as well as its geometric exactitude. 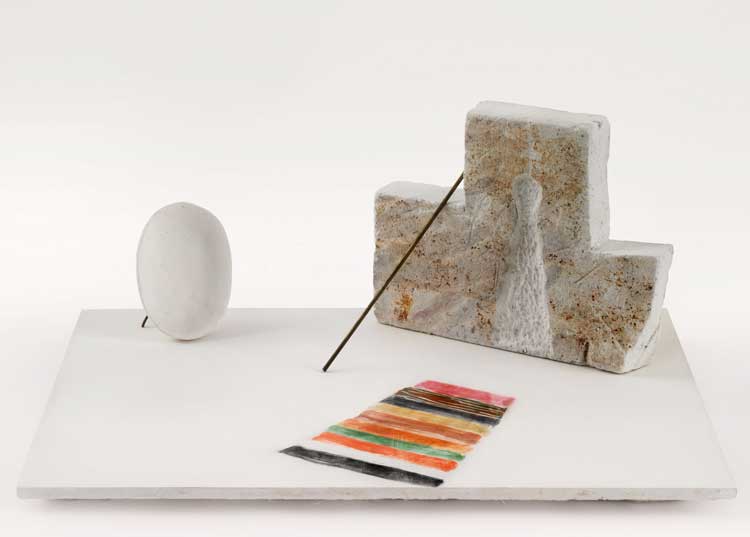 The Italian government took note: three years later, Melotti won a commission to work on E42, an expo that Benito Mussolini intended would celebrate 20 years of Fascist rule over the country. It is difficult to imagine Melotti’s sculptural work, whether his space-age abstracts or earthy Teatrini, fitting in with the third-hand classicism favoured in the latter days of the fascist regime – although Orfeo (c1925), a drawing of a handsome Orpheus unperturbed by a dog about to rip him apart – hints that he might have had it in him. 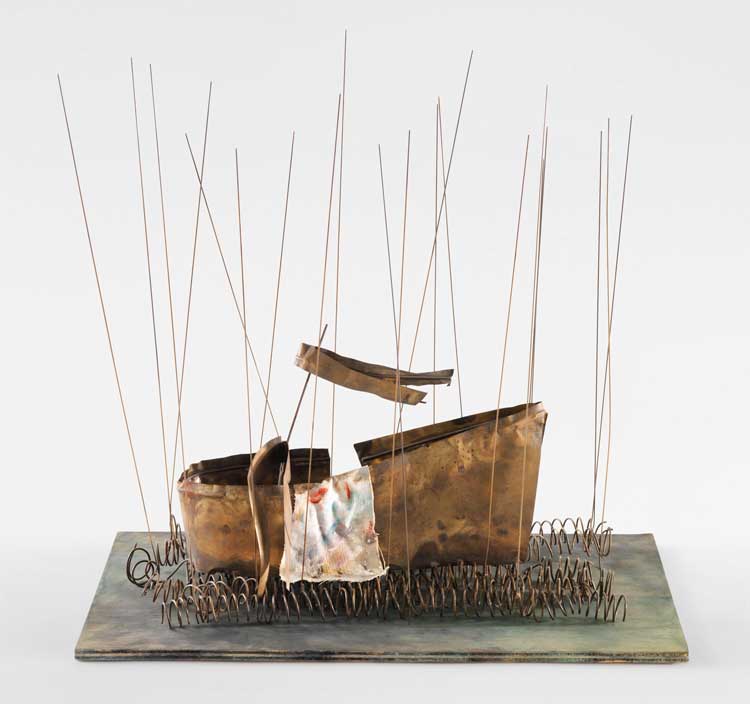 The E42 was not to be, though its buildings survived the war and now form Rome’s disquieting EUR district. Melotti’s Milan studio was not so fortunate. It fell victim to an allied bombing raid in 1943. A significant portion of his work was annihilated. “I must confess,” he wrote, “that the war has caused me great inner pain and sickness. One cannot make abstract art, one cannot even think about it, when the soul is full … of figures of desperation.” Melotti’s vision of harmony and order had been shattered. He abandoned his interest in the distant futures and began to seize the moment. Art historian Germano Celant said: “From this point on, his sculpture became transient and fragile, stripping itself of geometric and metaphysical absolutism and acquiring a carnality – linked in part to the colour of terracotta – where life, playful and fanciful, emotional and ardent, silent and sonorous, is the dominant thought.”

Like his exact contemporary Alberto Giacometti, Melotti turned to figuration. But while the Swiss sculptor reached towards his spindly signature hollow men contorted by the weight of history, Melotti reached, octopus-like, in dozens of directions. He would concoct primitivist mini-friezes, drippy neo-rococo ceramics, faceless humans with bodies abstracted to resemble bowling pins and wiry metal pieces made as much from air as from substance. 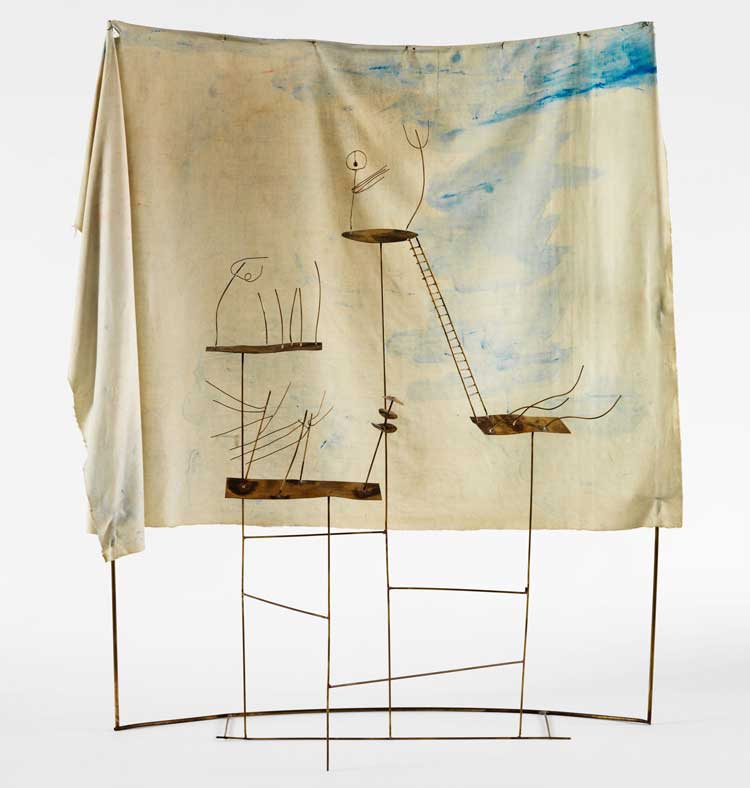 Empty space plays a major part in Melotti’s later sculptures, in which things of the world seem to be for ever battling the void. One of the most extraordinary works at Hauser &Wirth, Da Shakespeare (After Shakespeare), 1977, sees a series of scenes play out on water-thin brass platforms, before a lightly painted fabric backdrop. Melotti’s stickman figures start to look like alchemical glyphs, fragments of forbidden knowledge. The brass creates a shadow on the curtain behind, doubling and blurring the already inscrutable activity in front. Melotti weaves light, air and the space in-between his fixtures into a peculiar form of the theatre. 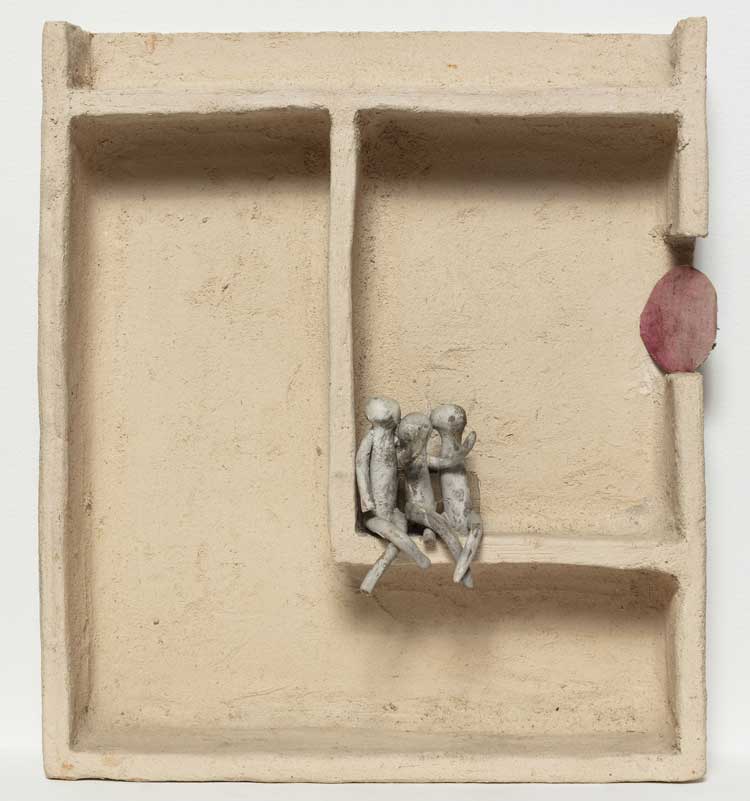 By contrast with this freedom and openness, the teatrini themselves are enclosed in thick walls, segregated from the world they face. They often feel claustrophobic. Le Mani could be a scene from the postwar Theatre of the Absurd, a symbolic breakdown of communication where mankind is reduced to hands groping around in the dark. But there is an undeniable warmth in Buona Notte, Bambini (Good Night, Children), 1984, where three figures sit huddled together in an empty room, staring at a sun-like disc that could be real or oneiric. Meditazione Domestica (Domestic Meditations), 1959, shows a figure at prayer, and evokes an affinity to the terracotta shrines often attached to the walls of Italian houses. Even the demonically horned beings in Teatrino (c1950) seem to be sharing a moment of connection. It is almost as if the theatre, a place of appearances and pretend, allowed Melotti to see humanity at its most lively and affectionate. 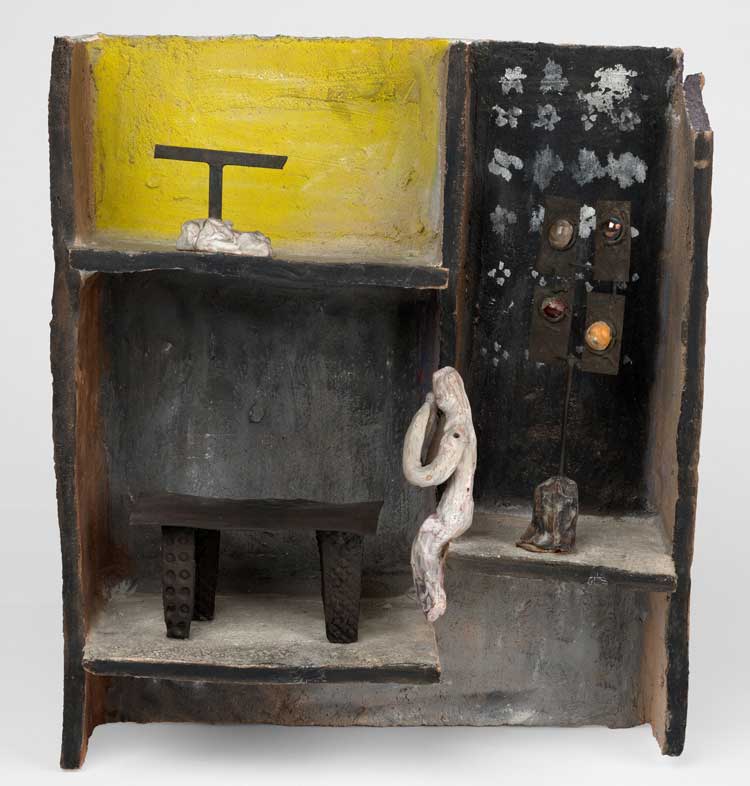 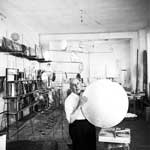 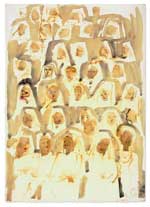