The artist talks about her latest exhibition, What a slight, what a sound, what a universal shudder, at Dundee Arts Contemporary, and what has led her to engage so closely with Stein’s work 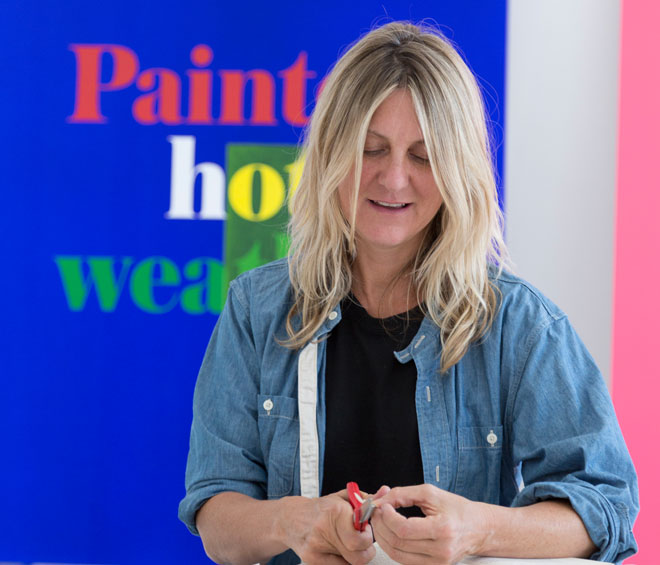 The first major European exhibition of acclaimed American artist Eve Fowler (b1964, Philadelphia), What a slight, what a sound, what a universal shudder, at Dundee Contemporary Arts, expands on her eight-year project to highlight and engage with the work of Gertrude Stein in an innovative and fresh manner. Using a variety of media and forms – from film to audio tracks, and from collage to screen-printing – Fowler’s work not only celebrates Stein’s ideas and writing, but also takes joy in disrupting and confusing today’s power structures and assumptions about the world and our own lives. 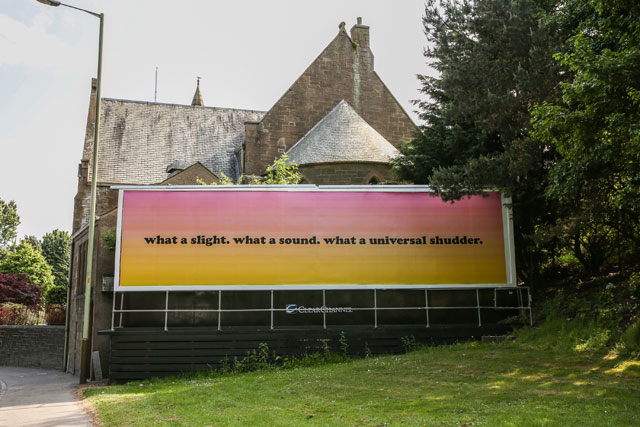 Eve Fowler: What a slight, what a sound, what a universal shudder. Installation view, Dundee Contemporary Arts, 2018. Photograph: Erika Stevenson.

As well as filling both galleries at DCA, the exhibition reaches further afield, inhabiting and disrupting public spaces throughout Dundee with ambiguous, startling and compelling statements. In advance of the exhibition’s opening, I caught up with Fowler, to talk about her work and its inspiration.

Christiana Spens: What drew you to Gertrude Stein’s work initially? When did you first read her work and why did it resonate with you?

Eve Fowler: Well, when I got out of graduate school, in 1992, a friend I was in school with said: “Oh, you should really read QED by Gertrude Stein.” I hadn’t read anything by her, at that point, and she kept saying that to me and, eventually, she went to the library and copied it for me and gave me a copy. I kept it for a very long time, until I ended up giving it to a student, in 2002. But I had it for 20 years. 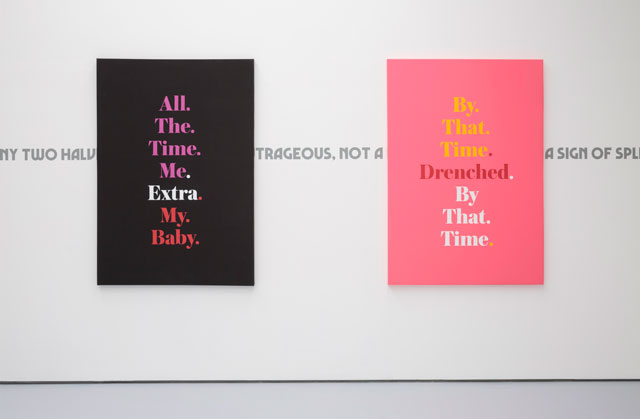 The way I started making this work, though, was that I was collecting books I wanted to read, and I had Tender Buttons [also by Gertrude Stein] for about two years before I read it. I brought it on a trip and I was waiting for someone for about four hours, so I read it maybe four or five times – it’s a short book – and took notes. I was so struck by the text and I didn’t make notes because I thought I would make something from it; I just made notes because I really liked it. When I went back to Los Angeles [where Fowler lives and works], I had a notebook and that book in my bag, and I went to the studio and didn’t really know what I was doing at that point. It wasn’t even my studio; it was a studio that someone gave me for six months. And I found things around the studio building and in the studio itself, and started making collages from the text. 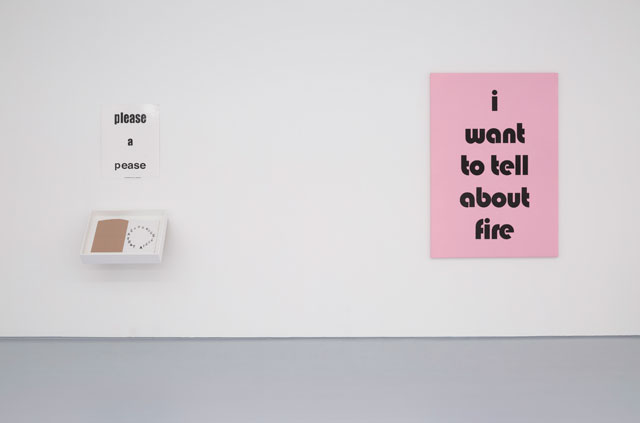 First, I cut up magazines, cardboard and stuff, to see how I would respond to the words and how it looked, and how it should be laid out and stuff. Then, because I was driving past Colby Posters on my way to and from the studio, I thought that was a really nice way to send messages to people. It’s really inexpensive, you could get 100 (of one poster) for $250 (£186), so I raised money and eventually that’s how I did that project, which was the second iteration of the first project.

So, I read things at very different times, but they really affected me.

CS: Stein used a lot of repetition in her writing, and you’ve taken that characteristic and played with it further, in visual and performative ways as well as in writing. When I see or hear your work, it strikes me that there is something ritualistic about this repetition, not only in a way that appropriates Stein’s patterns, but in its own, new way. Do you think of reading and performing poetry as related to meditation and spiritual rituals? Is there something key in those processes themselves that gives the words new life?

EF: I hope there’s something in it that gives it new life. I don’t know if I think about it as spiritual, but maybe meditative. When you watch my film With it which it as it if it is to be, for example, there are repeated images in a way. It’s about 20 artists working in their studios. You can go back and forth between the audio track, which is people reading [Stein’s novella] Many Many Women, which is very repetitive, and then there are images, too – so I feel it’s relaxing to watch, in that way, because you can just bounce back and forth, and if you’re not interested in one thing, you can pay more attention to the other. They work pretty nicely together. It feels it has a meditative rhythm. 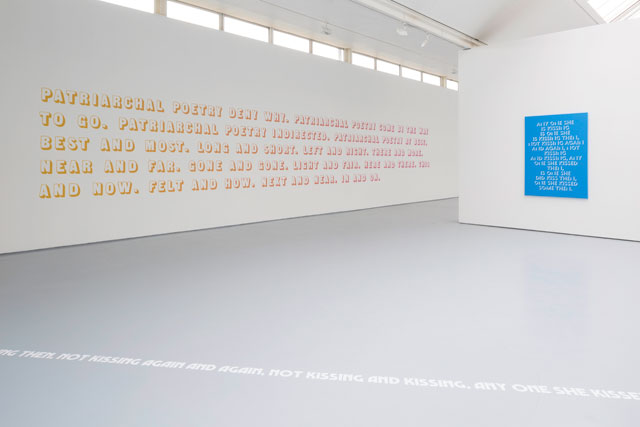 I do feel it brings new life to things, especially the first project, which was me extracting parts of sentences, so you’re seeing parts of sentences – like The difference is spreading… I feel, with that language or texts, different people have different experiences, based on what they’re projecting on to it, because it’s so open. I think that’s why it holds up so well over time, because it’s experimental towards time, but even now some of it feels really fresh and new and I hope it brings a new life [to the work]; that’s kind of the reason I’m doing it, or maybe just to point it out, because I think it’s really interesting.

CS: There’s a sense, also, that your work, and especially its collaborative elements, manages to generate Stein’s spirit, almost – as if you’re bringing her into the present, and not only transcending temporality and linearity in the sense of isolating the words from their contexts and narrative (as Stein did), but also in the sense that Stein’s spirit transcends time through these ritualistic performances? Is that something you intended or sought to play with?

EF: That’s so weird you should say that … When I was in Sydney, at Artspace, I did a residency and a show there, and the museum invited five or six artists to come and read different things by Stein. I didn’t know them, or I knew one person, but it was really fun because the people who came said afterwards that they felt like she was there, and that was so weird because that was a time when I felt like that, too, and we all sort of had that feeling. 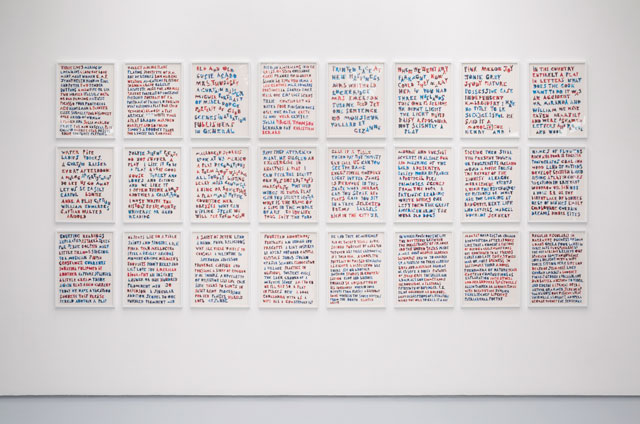 I’m also making it really easy for people because I’m presenting it in ways that are vernacular – really common signs – neon signs, posters and film. Film is really easy to watch (you just sit there), and then there’s a record – they’re things that we’re used to… It’s hard to say because it’s one of those things where you imagine it’s happening, but you’re not sure if it’s really happening. So, I don’t know is my answer! I’d like it to be the case.

CS: You mentioned in an interview with the exhibition’s curator, Eoin Dara, that some of your early memories are of listening to your mother’s poetry records and, later, of having a framed poem on your bedroom wall. Do you think these early and important memories have led you to these forms of expression and almost an innovative sort of memorialisation?

EF: I didn’t think of that, but I feel like it’s true. I think, as well, because of the way that I was trained as a photographer – where you point at things and edit them out of the world – [I look at] things that I think other people might be interested in or I think are important. I think that’s what it is – pointing at something and saying: “I think this is interesting and I think you might enjoy it.” I also think it’s a shame that most people don’t read Stein’s work. 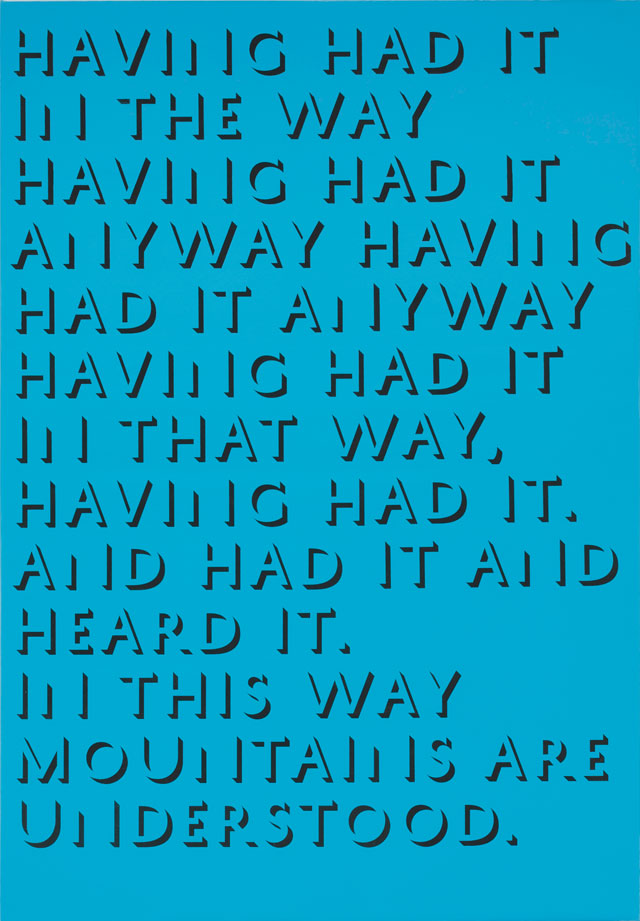 CS: Gertrude Stein was a very collaborative person. She was inspired by, and inspired, a range of artists and writers, and held salons to introduce people, often launching their careers. Do you feel that you have this approach to life and art in common with her?

EF: When my gallerist in LA, Nino Mier, first started working with me, he was talking to me about Gertrude Stein, about her salons and things like that. He pointed out to me in a joke that we had this thing in common, which is that I run a space out of my apartment – it’s out of the front of my studio – where I show other artists’ work. I’ve helped a lot of artists starting their careers – and some of them have done really, really well – so he made a joke that we had something in common and I was like: “What?!” I didn’t realise what he was talking about and I realised it’s kind of true… But I think of them as very different things as well. It’s definitely more fun [being collaborative] though. I’ve met a lot of artists – everyone I know is an artist – and people are much happier when they have people around. People who work in the studio by themselves don’t seem that happy. 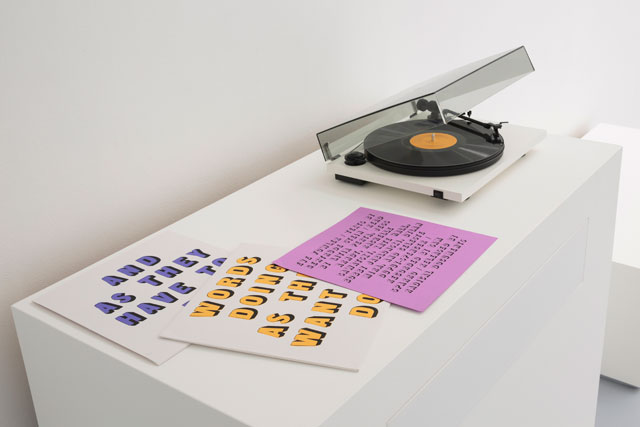 The film [With it which it as it if it is to be, shown as part of What a slight, what a sound, what a universal shudder] sort of intersects with the project I’m doing in LA – the Artist Curated Projects (ACP). There’s an audio track (Many Many Women) and then there are people working in their studios, and I’ve worked with every single one of those artists through ACP. So, either they’re helping me or I’m helping them. I’d say the main place where these two things collide is in the film, because you can see people making their work. Representational work is really problematic and tricky, so I dealt with that in photography a little bit and I stopped doing it, but then I felt like, well, in film when people are moving – if the subjects are in their studios making their work, that’s the best representation of a person; that’s the most respectful.

• Eve Fowler: What a slight, what a sound, what a universal shudder is at Dundee Contemporary Arts, Dundee, until 26 August 2018. 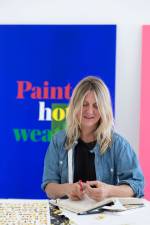