The barren, dystopian landscapes of Kelly Richardson’s audiovisual installations are hypnotically beautiful, recalling sci-fi and Romanticism, and issuing a subtle call to arms over the catastrophic effects of climate change 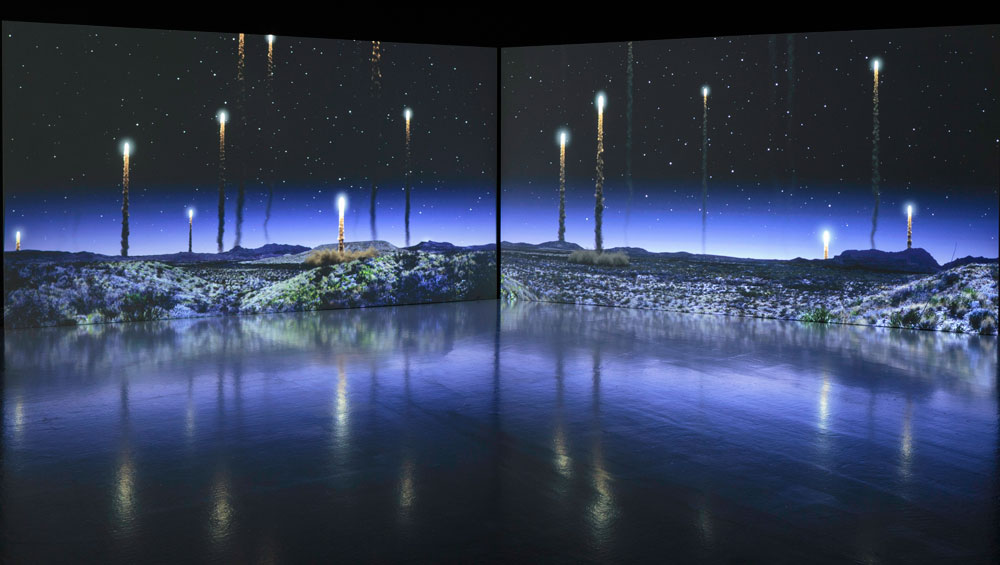 For her first solo exhibition in Scotland, Canadian artist Kelly Richardson has transformed Dundee Contemporary Art’s galleries with immersive, dystopian audiovisual installations. Using CGI, animation and sound in her digital films of landscapes, Richardson creates eerie and hypnotic worlds that visitors may pass through – from a burnt-out Martian scene to a dark world of craters and shooting lights. In the former (Mariner 9, 2012), which takes in the whole of gallery one, visitors are met with a future world in which previous “missions to Mars” are evidenced only by abandoned, damaged spaceships.

It is a bleak vision. As the artist has said: “Despite their suggested, abandoned state, several of the spacecraft continue to partially function, attempting to do their intended jobs, to ultimately find signs of life while possibly transmitting the data back to no one.” There is a sense of uncertainty in this and other scenes that is particularly worrying, with questions arising quickly: how did we get here? Why has everything been destroyed? Where are all the people? The Martian scene is desolate, lonely and yet beautiful: flames calmly brighten the polluted, orange sky. Indeed, this landscape, however dystopian, is also hypnotic. Those nagging questions are quickly quelled with the scenes’ quiet beauty. It would be easy to stand there for hours, meditating on the end of the world – and failed attempts to create new worlds – in an oddly detached and relaxed way. Perhaps the lack of signs of life is not so terrifying. 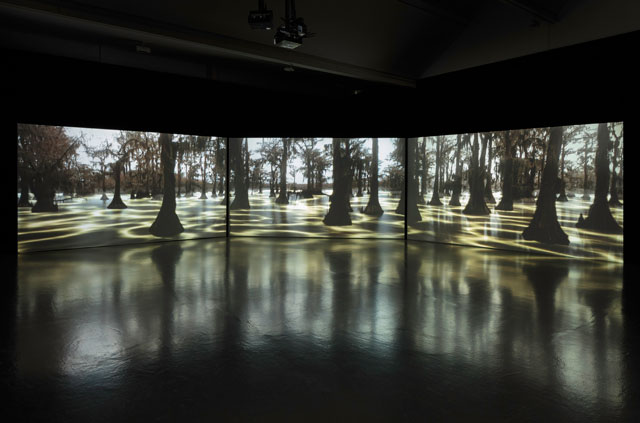 A sort of endemic listlessness pervades the rest of the exhibition. In gallery two, a larger room that houses Orion Tide (2013-14) and Leviathan (2011), the vision is less harsh, and more fantastical than dystopian. The “apocalyptic sublime”, as Richardson calls it, remains, however, the consistent theme. In Orion Tide,the landscape is dark and empty, save for a bleak foreground (a desert, perhaps), and streaks of light moving upwards. They look like something between shooting stars and glowing fish, or even plumes of smoke; they are all leaving whatever planet we are on. Above them, the sky is full of distant, shining stars. It is beautiful for its vacancy and lack of distraction, and is not unlike Scottish skies on a clear night. As becomes apparent walking through these scenes, they are not actually worlds away from what we are familiar with, despite their dystopian sheen.

Indeed, Richardson uses footage of present, worldly scenes, in these latter two works: Leviathan includes shots of Caddo Lake in Uncertain, Texas, which shows barren cypresses growing in a swamp. Manipulating that footage with CGI and animation, Richardson creates a work that invokes fantasy films such as those of the Lord of the Ringsfranchise, with its shadowy ground and seemingly infinite forest. Specific to this work, however, is a sense of being stuck, though without a sense of claustrophobia, as the footage is on a loop. It feels both more lifelike than a narrative-driven film, and more otherworldly, as if the usual constraints of time do not apply and we are stuck in a few moments for ever. 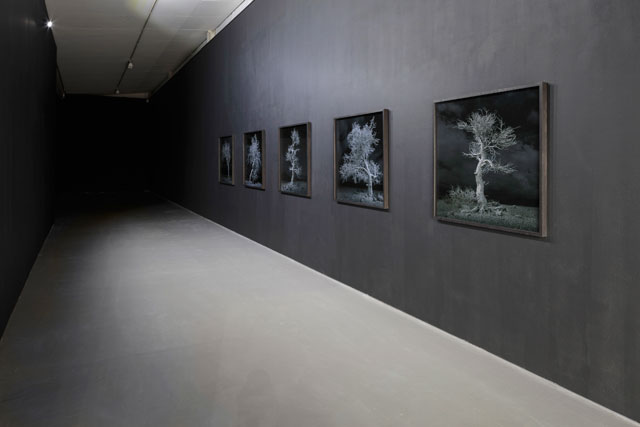 Near the exit to the exhibition is a series of C-prints, Pillars of Dawn (2015-17), which show monochrome visions of a future that is desolate, yet somehow sparkles. Barren trees are coated with ashes that gleam like diamonds against a dark, flat sky. Drawing on Romanticism as well as sci-fi films and books, these images are sublime; encapsulating the rest of the exhibition’s observations quite succinctly, Pillars of Dawnshow a death that should be terrifying but somehow is not. With nods to the processes of geographic and astronomical cartography, as well as lithography and woodcuts, Richardson, once again, softens the blow of her dystopian prophecy with subtly familiar and comforting motifs and methods.

Yet we should not feel too relaxed. Central to Richardson’s vision of a world (or several) that is familiar and yet eerily unusual, is a warning, or awareness, of the imminent and ultimate dangers of climate change. The exhibition’s title, The Weather Makers, is taken from the groundbreaking book of the same name, Tim Flannery’s The Weather Makers: The History and Future Impact of Climate Change (2005), which explores the emerging changes –  and destruction – arising from current global warming. While Flannery’s book exposed the reality of climate change, and raised the urgent issue of how to reverse it, Richardson’s work illuminates the consequent existential crisis for humanity. In her meditation on present and future destruction, she encourages us to face an end where narrative has disappeared – where the human experience, and story, is over, and where reality is confined to moments on a loop. She does this so hypnotically and carefully that the effect is profound. It is hard not to keep thinking about these simulated scenes marked by our own absence, as mesmerising and terrifying as they are. The challenge is to snap out of it – to wake from her hypnosis and grasp the daylight again.