Beaux Arts Gallery in London is marking the twentieth anniversary of sculptor Elizabeth Frink’s death. She was just 62 when she died, leaving an impressive body of sculpture, having been widely recognized in her twenties. Elisabeth Frink: Catalogue Raisonné of Sculpture 1947-93 has been published by Lund Humphries, which illustrates over 400 works, many of which have not been published before. In the wake of the second world war, Frink described her figures as “not at all sensuous, they were much too involved with the debris of war and heroics”. In the same vein aged just 29, she stated: “forms I make are inspired by a respect for life which seems always to be threatened by death.” From a Catholic and military background Frink grew up during the war. Photographs such as the iconic image of the atomic bomb landing on Hiroshima had a strong impact. Travels in Ireland with her first husband, French-Irish architect Michel Jammet, fuelled a latent interest in Celtic history and the past. Her reputation was established early on, as she attracted a significant amount of attention from photographers and film-makers, cutting a striking image as a strong woman who in making powerful human forms, animals and birds, conveyed the duality in life: beauty and a strong life force – with man’s capacity to destroy. 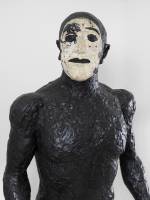