The British sculptor Lynn Chadwick died in April 2003 aged 88, after a remarkable career, following his turning to sculpture from architecture in his early thirties. He had rapidly attained success being exhibited at the Venice Biennale XXVI (1952) and XXVIII (1956). From prize winner in the famous: Unknown Political Prisoner Competition (1953), to the International Sculpture Prize at Venice (1956) and other major international events, his work rapidly became well known and acquired worldwide by major public and private collections before 1960. This timely exhibition reminds us how prodigiously his work then developed, and deals with his sculptures between l969 and 1988, a period of full composure, flourish and growing technical skill in which he seemingly anticipated the neo-Gothic contemporary tendency in film and art.

Chadwick trained as a Fleet Air Arm pilot and saw active service during World War II. He was of that generation whose sensibility was sharpened irrevocably by conflict. The Spanish sculptor Julio Gonzalez (1876–1942) can be claimed as an influence (one who came late to sculpture as well as felt the effects of the Civil War conflict). The “anti-illusionism” sculpture tag thereby later applied by Clement Greenberg, and the proficiency of his welded sculpture, placed Chadwick readily in this line, from Picasso and Gonzalez. After the triumph of Venice in 1956, when he beat Alberto Giacometti to win the International Prize for Sculpture, Chadwick’s work became highly appreciated everywhere. Like Francis Bacon, he had never been typecast by any art school, and his originality was clearly self-evident, as commented upon in the famous art survey Private View published in London in 1965,1 Chadwick was photographed by Tony Snowdon in his recently acquired country home, in Gloucestershire, relaxing in a dramatic yet hedonic pose with his very young daughter set within a Gothic revivalist space on a podium of concrete adjacent to a Chadwick-designed free-standing stove. Three welded mammalian beasts formed a surrounding, protective presence. And so did Chadwick’s highly profitable sculptural practice sustain family and home. On the same page spread, the author and critic John Russell could describe how Chadwick had moved forward against a degree of market hostility to “a group of figures very different from the paraphrases of animal form, which first made him famous... the new pieces have a tough, spare, concise, concentrated quality which suggests that Chadwick in his fifties is anything but a spent force”. This new exhibition at Beaux Arts bears out Russell’s judgment. In fact it reveals just how consistently good Chadwick’s later works became.

The exhibition is well presented, curated and catalogued (with an excellent essay by Daniel Herrmann) and follows earlier Beaux Art Exhibitions in 2001 and 2007. The exhibition focuses on solo figures and couples. Critics claimed in the l970s that a new tenderness characterised such Chadwick figures, combined with an enhanced materiality. While Herbert Read long ago had referred to the earlier works as carrying the “geometry of fear”, the critic Robert Melville professed instead to see a quality of “Aggression”. The distinguished author and critic Josef-Paul Hodin,2 actually chased back this aggressiveness to Chadwick’s mid-l950s “Teddy Boy” works, which had seemed to echo the poses of an English l950s anarchic youth craze. Perhaps this youth affinity and iconoclasm echoed something of Chadwick’s own reclusive and eccentric tendency, one who had initially combined the discipline of architectural qualification with the absence of any art school training, had emerged as a profoundly original creative being. Withdrawal to the country probably reduced his engagement opportunities with academia. In the end this did not affect his receipt of honours, first a CBE, and then from France, Commandeur of the Ordre des Arts et Lettres. Posthumously the Royal Academy, London, awarded him the Goldhill Award for Sculpture.

This new Beaux Arts exhibition shows how far removed such works as Two Reclining Figures, (1972) are in their gaze of mutual affection from the world of aggression and defensiveness, epitomised by those earlier works. Typically Third Girl Sitting on a Bench (1988) draws one’s sympathy, and is also curiously erotic.  Nor are the other powerful, quasi-figurative works lacking in an appealing or sympathetic presence. Today, they might rather seem to have early anticipated at least partially now, such neo-Gothic cultural fantasies as the humanoid world of the film Avatar currently showing to a big following.3 And clearly here too, it seems that thematically or conceptually Chadwick was well ahead of his time with such configurations. Beaux Arts have here organised a salutary exhibition on Lynn Chadwick, a major figure in British and European 20th century sculpture, and whose acclaim will surely continue to grow in posterity.

1. Robertson, Russell, Snowdon, Private View, Thomas Nelson & Sons    London, 1965
2. Josef-Paul Hodin was in the 1970s an International Advisory Panel Member for Studio International of considerable influence; his archive was bequeathed to the Tate Gallery.
3. Director James Cameron’s film of redemption and discovery in the next century. 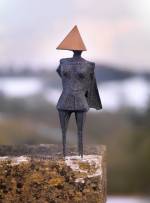 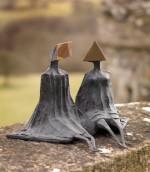 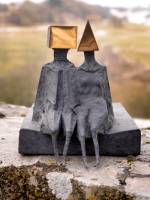 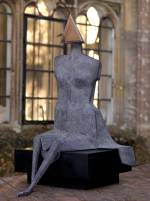