Since its inception, the India Art Fair has become a Mecca for Indian artists, curators, collectors, dealers and consultants, who come from all over the country and from elsewhere.

The exhibition grounds thronged with fresh new faces who had come to experience Indian and international art. It is one of the few venues where art gets a standing in India. So it is not surprising that the opening view of the fair projected works of interesting and dedicated artists, such as Anindita Dutta (presented here by Latitude 28), who have grown in their native soil and spilled over the globe with the essence of their art.

Entering the fair through myriad sculptural installations, the visitor is instantly drawn to a massive earthy monumental structure that exudes silent energy and dynamism. It is difficult to bypass and it has a strange magnetism. This layered piece by Dutta has been a work in motion from its very birth. Here, two different coloured sets of clay are mixed by naked feet and then stuck by hand on the walls of an orbicular structure. It is fascinating that the work is entitled Everything Ends and Everything Matters, as the entire process of plastering the walls and the structure itself resonates at various levels. At one level, it is reminiscent of the age-old tradition in India’s rural heartland of sticking mud to the walls of huts to make earthy, sustainable structures. The process of building while knowing that the structures are not going to be there for ever is an accepted part of the culture. The practice, demonstrated here in the building of Dutta’s structure, is laborious and time-consuming, yet has a cyclical energy that mounts as one notices the spiral structure coming to life from process to the final performance.

Dutta’s works have been seen globally, but she chose to showcase her work in India this time. What is also interesting is the fact that the material she is working with is closer to the earth of her origin. Its colour, the use of feet rather than machines to mix it, the gradient, textures and scars of the earth bring alive a language touched by the artist’s hand in all stages of the process. The coloured speckles and tones of the brick-red mix with the other grey clay is fashioned in free flow, yet there is a raw edginess to it that is only made possible by human touch. Dutta’s work here explores this edgy mix of contradictions in force and flow, of beginnings and endings, of voids and vibrant spaces.

The inner walls of the structure are smeared with the red clay mounds, which have attached fragments of torsos pushing out from the clay. These are then worked on by the artist, who uses her fingers to make marks and draw lines. The outer walls have a contrasting, duller grey clay on which the artist makes her drawings of primordial figures. Before the drawing, the energy of the work seemed to be strangled within the inner walls, violent and seething. The drawing gives it momentum as Dutta explores her inner life and collective present and past histories. During the process of the work, drawing and its artist-directed performance embedded in that thick, clay membrane of memory are human emotion and voices of a raw human echo, which come through, mingling with the strokes of the hands and bodies on that earth, where artist, mud and performer are alive and interacting with each other. The clay ceases to be a passive medium and gains a life of its own, where in its very destruction and scarring and re-scarring, it gains its life and its end. Even in that, there is an afterlife, a memory of a beginning.

Dutta has been able to imprint her personal history and the play of primordial human emotions within the clay through this work, and its spiralling earthy energy stills one into silent thought.

With such an entry to the sixth edition of the India Art Fair, the visitor is primed to expect even greater works inside. It is like the work itself – one is being sucked inside, made malleable to expect the unexpected. Splayed in front is a show of galleries and their works. Clinically efficient, almost camouflaged by one another in its space, it has come of age. The choice of works, presentation and selection of artists have become sophisticated, a far cry from India Art Fair’s first edition. Then, as you move around, you see works interspersed between halls. Works from renowned international artists such as Marc Chagall rub shoulders with the Francis Newton Souzas and the Jehangir Sabavalas. There is Shilpa Gupta’s work with a picture of a traffic light and a microphone in front of it, where the microphone resonates with the sounds of traffic rather than taking in the sounds of the environment. This inversion can be juxtaposed with Jitish Kallat’s work of the familiar human body check so common at airports worldwide today. Entitled Circadian Rhyme-2, it is a look at our external world with its sense of insecurity coming to the foreground.

Pablo Bartholomew’s work is an interesting collage of rarely seen photographs, which document life. One finds another nuance on our human situation in Dayanita Singh’s fabulous work, The File Room. There is an ample scattering of works of interest, even though the big star shiner is an illusion. Among works worth a mention are those by Hajra Waheed, Asim Waqif and Abir Karmarkar, who has made an interesting sculptural work from found materials, entitled Lighthouse. Gigi Scaria’s photograph Dust is an interesting evolution in his career, and LN Tallur’s work draws you in with its ritualistic character in the installation of flung mud on the walls going over a seated figure with flung hands from a rotating wheel. Every artist’s work is cleanly executed, and all galleries look great in their outlook, but there is nothing screaming out to be noticed.

In a way, the bling factor has gone, and one feels this reinvention of the professional art space. The fair this time around was not looking for the big splash. There was no wooing of the ridiculously out-of-line prices on artwork that have made many an international gallery wonder how a young artist can quote a price similar to that of a senior international artist. The hype is gone. Maturity is setting in. The reinvigoration of the art system in India is evident.

While collectors shifted attention after the initial bubble in 2007–09, artists have continued working, and what one finds here is a little more settled. The message is clear. Everything here is collectable and efficiently taken care of. Galleries such as Maskara are a promising example, where a traditional painterly charcoal drawing vies for attention with a shockingly mesmerising work of chicken heads in a box by Shine Shivan. There is a memory of a promise, a collective violence muted in a glass case as a museum piece.

There is Meenakshi Sengupta’s work, which one may take for granted as a traditional miniature until a closer look reveals the contemporary identity of a lift, with its little red light on top, making one revisit one’s own ease at building and living in a black and white world. There is also Narendra Yadav’s hammer made of natural metal and wood: its head is the head of Gandhi hitting at the unnaturally structured, mechanical drive of the capitalist and exploitative corporeal world in the form of a cement block, which gives way as it is chipped away. Reuben Bellinkx’s work is one of the fair’s strongest. It comprises a set of three videos in an installation, which has dogs barking at a chair almost as if someone were seated in it and then moving closer and ripping it apart. Bellinkx is identifying power as a threat, where inevitable violence weighs at its edges taking away rights and leading to the demise of power.

Nature claiming back what is reckless human greed and violence in the form of a metal plate stamped on by a deer’s foot, the deer standing resplendent with the comment that can be seen clearly in Jagannath Panda’s sculpture, harking back to the idea that everything matters and everything has an end.

Another interesting work is that by Jacky Tsai of a delicately hand-painted set of patterns in blue on white porcelain, which come together in the form of a formidable human skull. The world moves within polarities where one inverses another.

Pakistani artist Fraz Mateen’s work deserves special mention for its earthy, yet eerily whimsical feel. A resting head is carved out of the pages of a book, but feels like a wood carving, the pages layered like the rings of the trunk of a tree. The head is weighed down by the last few pages of the book. The pages seem to be inviting one into the human mind, where the world is still for a moment and questions and thoughts about wisdom and life take place.

Yadav’s set of inverted portrait photographs with a mirror, which shows the self as an inverted image, was another interesting highlight. Entitled That original may also be a reflection, it calls out to the viewer to question today’s world.

There was artwork to interest everyone in this edition of the fair, where movement had taken place from art that once had a limited cultural nuance to a current post-global scenario today. The fair was invigorating and one left with the first impression being the last – where there is a collective consciousness, where everything matters and everything comes to an end in a memory that speaks of new beginnings. 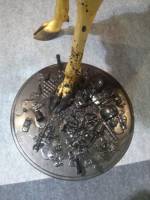