Marrakech Biennale: fifth edition – Where are we now?

Marrakech Biennale: fifth edition – Where are we now?

The fifth Marrakech Biennale takes place in locations across the city. Founded by Vanessa Branson in 2004, the purpose of the Marrakech Biennale has always been to address social, political and economic issues by way of contemporary arts. Combining programmes of visual and performing arts, cinema and video, and literature, the biennale addresses the arts from a multi-perspective, broadening the thinking capacity of the participants.

This year’s title, Where are we now?, has myriad possible translations, leaving interpretation open-ended and up for debate. The biennale’s curator of visual arts, Hicham Khalidi, told me: “The title really came out of a discussion between me and the artistic director [Alya Sebti] on our position as migrants. Living as migrants in Berlin or the Netherlands, as we did at that time, we felt we were really changing our gaze from Europe towards Africa. Actually, more and more, friends and people around us were re-migrating, so there was a shift going on from the north to the south, but also from the west to the east, so that became the basis of Where are we now?, which questions the status of Morocco and dealing with the contemporary itself.”

Marrakech is host to a diverse set of exhibition locations, which are very much branded by the visual and material history of the city. The Palais el Badii, Dar Si Said and the Bank Al-Maghrib are the key locations in the Medina, the old city. The Palais el Badii is a 16th-century complex that was once a central base of power and now resembles an abandoned, desert-like fort. The vast, hot expanse of land is carved out by waterways and terracotta tunnels and is an apt landscape for the display of sculpture. Against this sandy red-stone backdrop, in the centre of the courtyard on its own manmade island is Madonna 207 (2014) by Max Boufathal. The sculpture takes the form of a crossbow that resembles an animal constructed of colourful spokes and wooden slats. Beyond a tall, open arch is Asim Waqif’s The Pavilion of Debris (2014). This sculpture is an organically formed construction of wooden debris sourced from the site, which obstructs the pathway. Visitors can climb up and explore this interactive sound installation, while nesting birds on top of the palace walls add their squawks. Out in the main courtyard, a rectangular mirror tied to a large clay kiln reflects a blue sky and a lone palm tree. This is Katinka Bock’s Red, red, red (2014), a reminder of the long history of ceramics in Marrakech.

The Dar Si Said, home to the Museum of Marrakech, is tucked down a small street, which you can find by following painted signs along the walls of the Medina. This 19th-century mansion is filled with works of craft from Berber history from Marrakech, the Atlas mountains, and beyond. Leather, jewellery, carpets, metalwork and more are exhibited beneath Andalucian-style ceilings and between courtyards with fountains. One of the highlights at this location is Éric van Hove’s V12 Laraki (2013), a replica of a Mercedes-Benz V12 engine, made with 53 different traditional materials. Forty-two Moroccan craftsmen made the 465 components, and the parts are individually lit on small stands, showing off the intricacy from all angles. The engine van Hove has replicated was used by Abdeslam Laraki in the Laraki Fulgara, Morocco’s first high-performance, luxury car and Laraki is also a comment on the economy of Marrakech. Van Hove’s experience working on this piece led him to set up an atelier just outside Marrakech, where he now works full time, investing back into the business.

Van Hove explained: “The craftsmen in this country, 20% of the workforce, have a lot of potential, but somehow they are stuck in preserving tradition and tourism. Tourism has been a low-cost economy in Marrakech since the 80s. After more than a century of industrialisation, China around the corner is mass-producing things, so what’s the point? I just see a dead end there. I would like to see how we can bring craft into a sector of the industry that has more buying power and possibilities, but also has some technical challenge to it. The worker is not interested by challenge, the easier the better, but a true craftsman needs it, it’s his way to breathe, and this guy is the one dying in the context we are in because there is no more flavour in his mouth. So hopefully that’s one path I can follow, to try to reconnect craft to the modern industry.”

Further into the Dar Si Said, Cevdet Erek’s sound art plays from a black speaker in an alcove of a green-tiled garden, and drawings by Walid Raad are displayed behind Berber ceramics in glass cabinets. For a visitor to the biennale, contemporary art infiltrates the museum and, even though many tourists in tour-groups mill by oblivious or uninterested in its presence, somehow in both instances the art enters into the tourist economy of the city simply through its materiality.

Located in the central square, Jamaa el Fna, the Bank Al-Maghrib is a historical monument that was once the headquarters of the central bank of the Kingdom of Morocco. Requiring investment and purpose, it now lies unused and empty. The building resembles a terracotta-coloured brick block on the outside, but going inside is like entering a relic of Moroccan history in the form of a decorative lantern of woodwork and glass. Among other works, this is the project space of curator collective The Naked, from The Hague. Their plan was to examine the change of context in bringing contemporary art from The Hague to Marrakech. One of their exports from The Hague is the work of Ton Schuttelaar, an installation of two chairs and a can of Coca-Cola, sourced from Marrakech and placed on a low white block. While we were discussing this work, we realised that someone had moved the chair and was sitting on it. The work was approached in a completely different way from how it would have been in The Hague, bringing the object back into the flow of life again.

Just off the main hall, Monovacation (2013), a video work by Burak Arikan, is projected above a marble fireplace, showing a collage of three- to four-second clips from holiday television commercials. A supporting diagram shows a network of tourism buzzwords corresponding to the video clips, such as “woman”, “sea” and “beach”. Downstairs, a series of dark rooms allow artists an individual space to display their work. Moroccan artist Younès Rahmoun worked with a copper craftsman from Tétouan in northern Morocco to create his work 77 (2014), which features clusters of copper lamps wired together, faced down and grouped into chandeliers. The title relates to the number of branches and ways of practising Islam. The room is illuminated by the lamps in a soft orange hazy light, which reveals the inner cabinets of the bank, still full of paperwork.

In Gueliz, the new city, the atmosphere is very different from that in the busy Medina, with large avenues and tall blocks of buildings. An old art deco apartment block, L’Blassa, built in 1932 when Morocco was still a French protectorate, is another of the main locations for visual art. In the basement is the African Fabbers project, which used a 3D printer to create objects made of clay at the opening night. In a city where handmade crafts bolster the tourist industry, the project presents an interesting study of the relationship between new technology and tradition. Another project, Zobra, by the artist Simohammed Fettaka, curated by Nawal Slaoui, shows a video of Fettaka walking through the streets of Marrakech dressed in armour he designed for the project, with children following in his path, amazed and delighted. The name Zobra derives from the Arabic word for iron and power and the Slovak word for demonstration or parade. It would be interesting to see a comparison of this project in a western city.

In the upstairs apartments of L’Blassa, the work of Mint Collective is displayed. This collective is a group of artists who participated in a residency programme in Marrakech before the biennale. Artist Jean Feline investigates the recurrence of the symbol of Coca-Cola and how it manifests in the city with his chequerboard of red and white Cola-Cola caps. Tiny wooden stools invite visitors to sit and play chequers, bringing the symbol in from the street and into the discourse of the gallery. On the roof is a sculpture titled 13th Hour (2014) by Esme Toler and Olì Bonzanigo. The surface of the sculpture is smooth and milky black. It is made using the traditional Tadelakt plastering technique, which the artists learned from a Moroccan craftsman during their residency. The sculpture takes the shape of an incomplete circle, inspired by the double-headed snake, and is also a nest that people can enter and sit in. Bonzanigo described how the purpose of the sculpture emerged: “We arrived on the last day, three minutes before the opening, with our rags to give the final polish and saw that the sculpture was already inhabited by 20 people, completely covered. So should we move them and say, this is a sculpture, or just let it exist? It was so organically inhabited that they thought it had been here for ever.” Esme continued: “By the end of the evening, I was slightly worried about the roof supports because there were a lot of people here, and into the night it became a focal point.”

The focus of contemporary art at the Marrakech Biennale is very much defined by its context; the locations of the exhibitions and the city itself. And this is not due to the mosaics or the terracotta-red walls. The biennale reminded me that, no matter how white the wall, contemporary art can never be seen on a blank canvas, or, indeed, in a vacuum. Contemporary art enters, just like any export, into an economy of the street and the hierarchy of trade that surrounds it, and this is a mechanism within which human engagement is necessary. So, arm yourself with a map, and the Marrakech Biennale will provide the platform, most probably a rooftop, where a conversation can begin. 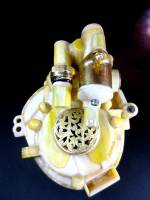 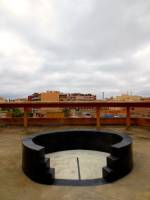 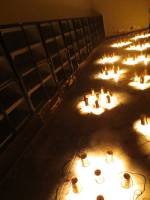 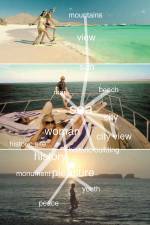