Esme Toler and Olì Bonzanigo are the creators of 13th Hour (2014), a sculpture on the roof of L’Blassa, a 19th-century French colonial apartment block in Gueliz, the new city of Marrakech. Up a spiral stone staircase and through apartments, usually deserted but now filled with contemporary art, you emerge into the elements to find a sculpture nestled centrally on a concrete plateau.

The sculpture is a simple circular shape, firmly grounded and waist-high. The surface is smooth, black and creamy, made using the traditional Moroccan tadelakt plastering technique. Already looking like part of the furniture, the sculpture will probably be occupied by a couple of artists or the cleaning ladies on their lunchbreak. I meet the artists Toler and Bonzanigo on the roof, where we sit on 13th Hour to chat.

The two artists were on a residency in Marrakech with Mint Collective, a group of artists creating works for the city’s biennale. They bonded over their craft backgrounds – Toler is a British wood carver and Bonzanigo an Italian metalworker – and decided to partner up. “When we arrived, we were both interested in materiality and technique. We’re both sculptors and our craft practices are how we work, so our parallel interests have come together,” explains Toler.

Toler and Bonzanigo worked in Marrakech for several months before the biennale and they are very in tune with the city. Bonzanigo tells me about her experiences working in the city as an artist: “Immediately, there was a real technical engagement with the city. It’s very metropolitan, the pace of Marrakech. You are constantly part of a mechanism that is revealed. It all happens in the streets, and when you buy an orange, you are part of this mechanism. In London or Milan, it’s much more of an independent society. The streets are almost used as a travelling tool rather than an inhabiting place. I think that’s the thing I appreciated most in Marrakech, especially as we arrived not as tourists, but to work.”

The surface of the sculpture is one of its most distinctive features; the colour has an echoing depth and the texture is smooth and rich. Tadelakt is a regional plastering technique using lime-based plaster that is commonly employed in Morocco for finishing both the interiors and exteriors of buildings. The sculpture is, therefore, very architectural in appearance and presence, being assimilated into its rooftop environment among the other shapes of the skyline.

I ask the pair what informed their choice of material. Bonzanigo replies: “Paradoxically, I got a bit bored of metal because there’s so much metal craft here. This phosphorous rock is one of the main crafts of the country, and there’s a valley to the north-west of Marrakech called Youssoufia, where it comes from.” For Toler, it was the first material she was drawn to on arriving in the city. “We knew we were going to have to learn the technique, and that’s why we were both attracted to Marrakech, to learn a new craft,” she says. “We needed a teacher and, through our friend Mohammed who works at the bar at El Fenn (a Riad in Marrakech owned by Vanessa Branson, president and founder of the Marrakech Biennale), we met Moustapha Ait Ouhattab. He’s been doing tadelakt for 25 years and he’s such a master. We worked with other tadelakt artisans, but he had a very interesting style, which he has developed over time.”

Tadelakt is a Berber word meaning “to rub”. Bonzanigo explains the technique, which involves rubbing the surface of the stone to create a smooth effect: “You have a special stone that you use to massage the material. At first, we were both, not aggressive, but strong in the way we approached the material, because metal and wood are both pretty solid. We went through a process of completely unlearning and relearning through a meditative technique, because you go through different layers of polishing. I can show you (she brings out a piece of stone from her pocket); inside it’s very granular and you need a lot of patience to polish the surface. Moustapha taught us to respect the time of the material and he always said, ‘slowly, slowly’. It’s really been a school. This sculpture we are sitting on was our school, in life and practice.”

I ask about the practicalities of working across languages and cultures. Toler says: “We learned keywords in [the Berber language] Tamazight, 20 words that we could use cyclically (they both laugh). But working with a material, you develop a language between you because you’re working on something that is shared. The material itself becomes a language and a gesture. It was a very pragmatic way of working. Because it’s such a formal sculpture, it was quite clear in the beginning because we had a translator and a discussion about it.” Bonzanigo continues: “But also it was unclear – it didn’t come out how we would have expected in London or Milan because adaptation and discussion really came through with Moustapha as well. Also, with formal and aesthetic solution-finding, Moustapha definitely guided us as well because he’s not only a craftsman.”

The sculpture has a very calculated feeling about it; heights and widths are balanced and considered. Toler tells me that shape was a very important part of the process when they arrived in Marrakech. “We did lots of sketches, models, computer-aided designs – but it didn’t end up how we expected. It’s amazing how much you need to plan logistically, but then that plan always gets absorbed by the next step.”

Bonzanigo describes how the form developed in parallel to the rest of their process. “So while we were developing material and form, on the other hand there was a more symbolic and spiritual aspect. We came up with the symbol of the double-headed snake, which we saw on a Berber tour, engraved on a door. We found out that it is the symbol of the Master of the Earth or the Origin. It was also somehow engraved in our relations as artists and people because we were working with two minds on the same project. All the people from Morocco immediately associated with the sculpture, both with the material and, when we went more in depth into the symbol of the double-headed snake, they were more involved with the understanding.”

Bonzanigo continues: “I want to tell you something very important. This roof has a concentration of elements. First of all is the sun. We cooked the material for a few days, and it was very interesting because it has this process of drying and reflection. It was incredible because we used 25 kilos of black pigment and this is the natural colour of the rock. Then we had our water source (she points to a small, dried-up mud patch on the concrete). There was a pond of water from the days before we arrived, it rained a lot and we used that water to make the sculpture. Then we have the Atlas Mountains over there, which are now in the clouds. Every day when we arrived, it felt like the sculpture was more and more autonomous, like a creature. I’m still shocked myself about what came out of our heads.”

Along with its physical properties, the sense of aesthetic balance achieved by the artists, therefore, is due to the psychological relationship of the sculpture to the elements and its surrounding environment, which adds to the visual centrality of the form. Toler continues: “A lot of Moroccans do speak about the spirit of tadelakt; it keeps the cool in during the heat and the heat in during the cold, and it’s waterproof, so it has many properties that are inhabitable. For casting, they use particular river stones as release agents, which are worked at by time – very compact and soft rocks. They also use the savon noir, the black soap you see in the market. It’s the same material they use in the hammam.”

On the ground space inside the sculpture, a painted straight line reaches halfway into the centre of the circle, resembling a clock. Bonzanigo explains how the title 13th Hour was chosen. “It’s a rupture in the idea of time. A potential and a fragmentation. While we were working all day long, there was a curvature of the shadow inside, it moved all day long.” Toler continues: “The shape was always asymmetrical and this line (she points to the straight line) was going to follow the asymmetric line of the shadow like a sundial, but Moustapha said, no, it must be symmetrical, and it was the right decision. We had a really long discussion as to what was going to go on in here and we tried out many different lines and we had to rework it a lot and it was a real process between us three.”

Bonzanigo describes the opening night of the exhibition: “We arrived on the last day, three minutes before the press opening, with our rags to give the final polish and saw that the sculpture was already inhabited by 20 people, completely covered. So, should we move them and say, this is a sculpture, or just let it exist? It was so organically inhabited that they thought it had been here for ever. It’s very interesting because we didn’t say anything at all and people just surrounded it and inhabited it.” Toler continues: “By the end of the evening, I was slightly worried about the roof supports because there were a lot of people here, and into the night it became a focal point. It was funny because we were always thinking about it very formally, and although it wasn’t born to become a social space, it very naturally did. Through the way we were working and being a social team together, it emerged to our surprise.”

Sitting on 13th Hour under the sky, it feels as if time has paused for our conversation. How long will it stay here for, will it be removed at the end of the biennale, or allowed to continue existing? “We are hoping it will slide under, because we think it will last for 10 years,” says Toler. “If not, they will remove it.” Bonzanigo adds: “It would be nice to see a process of decay, which has started because it’s been inhabited. Already on the first day it’s already alive. It’s organic as much as wood and as much as metal, they have a life of their own.”

I speak to Toler again a week after we had sat on the roof of L’Blassa to chat. She tells me that 13th Hour has now become a place where young, local people gather, “a fully fledged gangster hangout”, she says. I hope that, through its occupation, it will remain on the roof for years to come. 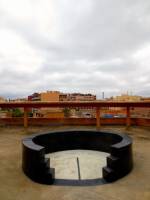