MAYA, a major exhibition by Anindita Dutta, is the second exhibition of the Dame Jillian Sackler International Artists Exhibition Program at the Arthur M Sackler Museum of Art and Archaeology at Peking University. The first, Gernika/Guernica, sound sculptures in the form of old radios and multichannel video works by Anita Glesta, dealt with the horrors of war and the endurance and will of the human spirit.

Only months after creating the sensational sculptural performance Everything Ends and Everything Matters at the 2014 India Art Fair, Dutta had to gather her strength to create, not one, but two phenomenal works. This exhibition almost did not happen, as she had been in hospital and had to delay her travel to Beijing. Happily, she quickly gained her strength with food from different parts of China and, in less than a week, she was ready to create monumental works.

Dutta’s exhibition, MAYA or “Illusion”, deals with dreams and reality or life and death. She created for this exhibition, on site, two large sculptures – a permanent one for the main gallery and a temporary one for the museum’s courtyard.

The permanent work, Hourglass, is an abstract shape that, when seen from above, resembles the Chinese bronze wine vessel “Gu.” This work tested the endurance, drive and will of the artist, the curators and everyone involved. After a week of being unable to find the materials Dutta uses in the US, a number of similar materials were tested, but when combined with colour pigments and other ingredients, nothing worked, or permitted only a few minutes of work time, an impossible task as Hourglass has four curved sides, each measuring 21 feet long, (for a total of 84 feet in length), 8 feet high and 8.3 feet wide. Finally, though, we found materials that, when mixed together, dried hard, and were suitable to use. For this work, Dutta selected Chinese and US shades of yellow for the outside walls and combined the two to create additional colours. For the inside, she used three shades of blue (ultramarine, including one she brought from the US, and a dark blue): again, she combined these shades to create more colours. In addition, she brought bags of burlap from India, which were used as the faces of the figures.

The original sketch and maquette for the Hourglass had circular openings at each end – one so that visitors had to bend down to enter and the other high so it would be difficult to climb out. We decided that, to make it easier for people to experience the work and to be more consistent with Chinese tradition, the lower opening should be raised and the higher opening lowered. A similar step design is found in traditional Chinese homes and in Forbidden City buildings; it is meant to protect the home from dirt, insects and floods and prevent wealth from escaping, and it is bad luck not to have one. Legend has it that because Emperor Pu Yi was very young and wanted to ride his bicycle freely, officials decided to remove the doorstep from one of his homes, and there went the empire.

This work reminds me of Michelangelo’s Sistine Chapel: although abstract, it deals with heaven and hell, dreams and reality, chaos and peace. On the large outside walls, the shape of an hour-glass is depicted with elongated, distorted and oversized human figures floating within it, the exaggerated facial expression sometimes having a sexual appearance. At the centre of both walls, happy (or as Dutta says, “ignorant”) people are sitting on top and desperate, crying figures at the bottom, in heaven or hell.

The inside, from afar, looks calm and dreamy, yet as one gets close, faces with chaotic expressions abound. The cool blue colour misleads the viewer because one is entering a disaster zone, strikingly similar to the dire situations of those who perished in the Chengdu earthquake, or the Fukushima Daiichi nuclear disaster, or the overwhelming scenes from the Indian Ocean earthquake and tsunami. Everything looks beautiful, but nothing is real: it is all MAYA.

Dutta’s temporary work is of no less importance. It deals with the impermanence of life and the memories left behind. It was 11.5 feet high and 44 feet long, and was created from wood and wet clay. To create this work, three large walls were constructed and fixed together and two tons of clay were needed. We worked with a large studio that creates enlargements for contemporary Chinese artists, to create a formulated golden-colour clay with the consistency required by the artist.

The centre wall depicts two human figures in the foetal position surrounded by circular waves. The wall on the left featured a bicycle and drawn figures riding it and a large female figure at the other end. On the right-side wall, the artist depicted a female figure balancing on a floating chair with a large broomstick on her shoulders carrying clothes, and on top were human legs stepping on it and to the right a large imposing male figure. This work was created on the afternoon and evening before the opening, working until 3am to avoid the hot temperatures and beating sun, and was completed with Dutta’s performance the next day. In her performance, she took the wet clay and covered the empty spaces and hung some wet clay-covered clothes on the broomstick, finally climbing on to the wall and becoming one with the work. “From clay we come and clay we become,” was her mantra.

This temporary work only lasted one day; even during the performance, the clay had dried and was falling off the wall. By morning the following day, everything had fallen except the bicycle on the left, the two figures in the centre and the assemblage on the right. This work is a life-cycle, only memories remain.

In addition, the exhibition showcases Brick Coffin, Self-Portraits, Life-Line, A-Mazing, Wrest in Peace, Everything Ends and Everything Matters, A Matter of Moment, and Knitting Memoirs. At their core, these works also stem from Dutta confronting the emotionally charged issues that matter in life.

The sculpture Hourglass is now part of the Dame Jillian Sackler International Artists Exhibition Program Collection at the Arthur M Sackler Museum of Art and Archaeology at Peking University.

Hourglass will be featured in the 6th Beijing International Art Biennale, scheduled for autumn 2015. 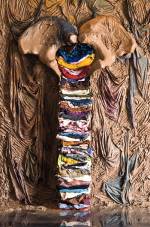