Dóra Maurer: ‘My work has been based on change, shifting, traces, temporality’

Dóra Maurer: ‘My work has been based on change, shifting, traces, temporality’

As a new exhibition surveys her 50-years career, the Hungarian artist talks about colour, maths and geometry – and why she doesn’t like finished work 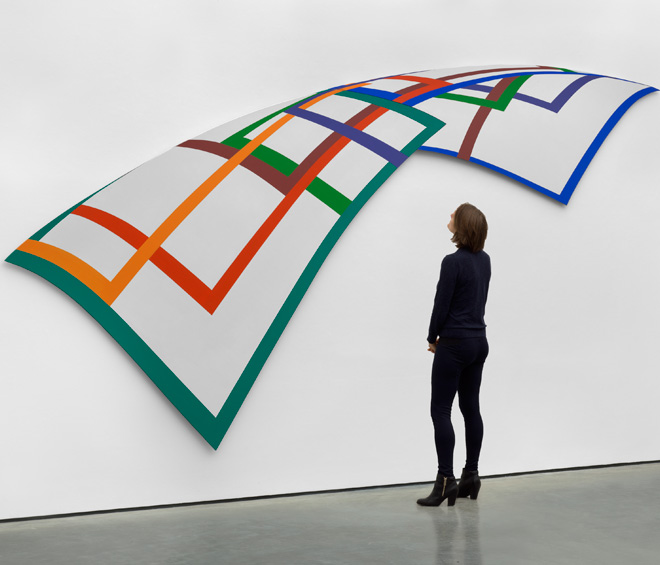 Dóra Maurer, who was born in Budapest in 1937, rose to popularity in the 70s, and is widely considered a key artist of the Hungarian avant garde. Throughout her 50-year career, she has experimented prolifically with diverse media, including photography, film, painting and printmaking, united by her abiding interest in mathematics, geometry, processes of movement and, more recently, the intersection of colour. Her current exhibition, 6 out of 5 at White Cube Mason’s Yard in London, is a broad survey of her work across the decades, including her well-known photographic series from the 70s, frottage drawings from the 80s, and more recent paintings.

Matthew Rudman: 6 out of 5 at the White Cube contains two wall installations made especially for this exhibition. Can you talk about your process for the creation of these pieces, and their relation to your other work on show?

Dóra Maurer: When I looked at the ground floor of the White Cube, I felt that large forms would work better on the side walls than pictures hung up. Recently, I have been into the illusionistic shaping of curved and straight planes penetrating and crossing each other. I took some elements of the installation from these picture objects. I tried to create the impression of shifting and slow dynamics by lining up pairs and through the transparent effect resulting from partly overlapping panels. It was during the process that I realised I was creating a kind of a stage where characters are marching or performing something.

MR: You began your career in printmaking. What inspired you to experiment with photography?

DM: At first, doing photography replaced a long period of working with plates and printing. My original intention was to take out, to delete a pebble from a large copper engraving in the second phase of the process. It was a typically conceptual idea, and realising it in the medium of a copper engraving was a nice idea, but doing it with the conventional technique was a real hindrance. So I made a corner from cardboard pieces, placed a pebble in it and photographed it. Then I also took a photo of the empty corner and the stone I was holding in my hand. These photographs were actually phases, a process of sorts and they yielded themselves to be exchanged and reversed.

MR: As this exhibition at White Cube demonstrates, throughout your career you have worked with a wide range of media, including photography, film, drawing, printmaking and painting. What has driven you to experiment with different media so prolifically, and do you regard any of these forms as your primary outlet?

DM: These media came naturally. They were never “forced” media experiments. At the end of my college years and afterwards, I was fascinated for a long time by copper engraving and related techniques invented to express my intentions. In the meantime, however, I also drew many picture-like figurative studies and I did oil painting, too. I was never attracted to photography because I wanted to make nice pictures. I was drawn to the photogram exactly because I discovered in it the inevitable imprints of light and space situations. I saw film as an opportunity to generate and record optical phenomena that are otherwise unnoticeable. All the way up to the 1990s, for me painting meant “filling in with colour” – ie denoting moving elements of form by colours. Then I became more immersed in my work with colours, and I am still faithful to it. But I haven’t made a film since 1996. This was partly because of the circumstances: I was the professor of an interdisciplinary painting class at the Hungarian University of Fine Arts in Budapest for 18 years, so I was busy dealing with students. The time and energy I had left I spent on painting, and I used photography and filming in my work at the university. Now that I am done with teaching, I find myself creating photo works, quite unexpectedly.

MR: How do the ideas you explore in your photographic work – your series Reversible and Changeable Phases of Movements (1972), for example – connect to your work in painting and colour?

DM: Since 1969-70, my work has been based on change, shifting, traces, temporality from various perspectives. This means that the reversibility of changed meanings and the series of painted picture objects had the same root.

MR: How has the colour theory work of Josef Albers influenced your practice?

DM: I have always known about Goethe, Schopenhauer, Albers and the other colourists, but it was really my experiences that impacted my own painting; I never started out from theory. When I started my lectures about colour at the university, I used the book Interaction of Color by Albers, and especially the representative silkscreen plates, because they were perfect for teaching the method of colour perception. Of course, it all affected my own painting, too.

MR: You have spoken in the past about the importance of displacement in your work. How has the influence of this principle on your work changed over time?

DM: I have remained faithful to it, even when this principle seems to be buried or sophisticated by everyday practice. When a particular phase of the work process is exhausted, going back to the principle of displacement opens up seemingly closed opportunities.

MR: How did you first become interested in the artistic potential of mathematics and geometry?

DM: The identicalness and difference between objects, their seriality aroused my childhood interest in calculus and arithmetic. Geometry provides the framework for arrangement.

MR: You have spoken about an aversion to “finished” works of art. Do you regard your own works as ever truly finished?

DM: I said that in the 70s, when I mainly did photo-based series and film works. These are never really finished, and every time I see them I want to adjust something about them. But, yes, to this day I have a kind of aversion to the concept of finished works, because that comes along with celebration and satisfaction, and is hard to step out of.

MR: You are currently curating an exhibition of the work of your husband, Tibor Gáyor, at Carl Kostyál in London, entitled Lares et Penates. Do you find yourselves influencing each other’s artistic processes?

DM: Of course. We did a parallel oeuvre exhibition in 2001, where we explored what one and the other did in certain periods of our work. A massive catalogue was made of this show.

MR: How would you describe your own work to people?

DM: I don’t really like to do this, but let me quote Walt Whitman. I can especially identify with the last line:

I celebrate myself, and sing myself,
And what I assume you shall assume,
For every atom belonging to me as good belongs to you.
I loafe and invite my soul,
I lean and loafe at my ease observing a spear of summer grass. 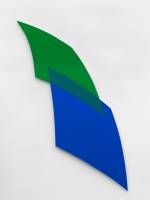 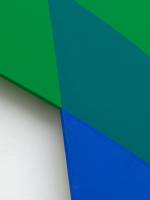 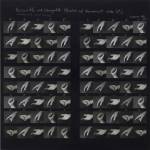