In celebration of Derek Jarman’s life and work, the Cultural Institute at King’s College London is exhibiting Pandemonium, marking both the 20th anniversary of his death in February 1994 and what would have been his 72nd birthday on 31 January.

“A Summoning of Angels”1

Jarman was a humanities student at King’s from 1960 to 1963 and this exhibition aims to “link [his] studies as an undergraduate – especially the emphasis on the literature and history of the medieval and renaissance periods – to his later artistic and intellectual interests”. In the first gallery space, sketchbooks and a self-portrait are displayed opposite a small shelf of books that include Yates, Jung, Shakespeare and Allen Ginsberg. Would that every exhibition could have this source material for the viewer to browse through in order to glean additional layers about the maker’s thinking. Another kind of revelation is to be found on a small label next to a 1960s Jarman self-portrait, painted in a cubist style. The label tells us this picture won him the London University Union art competition in the amateur category. An interesting snippet of contextual information (in terms of the time and culture in which Jarman emerged) is that David Hockney won the first prize for the professional category in the same year. Although both artists were informed by their individual explorations of queer culture, Hockney has kept to his particular 2D path, while Jarman’s insatiable thirst for exploration, performance and film led him along a fundamentally diverse route to include all kinds of materials and cross conceptual boundaries. As the actress Tilda Swinton tells us in her introduction to the recently published Derek Jarman’s Sketchbooks: “Derek Jarman lived in his hands. They were his principle powerhouse. Green fingered and black-inked, he moulded his everyday with them. A painter, a gardener, a longhand writer, he held his materials dear: his workshop, his garden, his desk.2

Jarman’s relish of materials, explored through various dimensions, permeates all the works in this exhibition and, despite his untimely death, Pandemonium demonstrates the relevance of his thinking today. In the breadth and depth of his various enquiries (shown here in his books and letters), we are reminded of the importance of informed thinking in the creative process, and we glimpse the threads of thought that connect ancient conceptual pursuits to present-day enquiries.

The dance Jarman takes in this exhibition, through historical references, personal observations and imaginings, are enhanced by the inclusion of MP3 players to accompany visitors. By connecting our receptive seeing to our receptive hearing while we move through the displays and installations, the curator is perhaps suggesting an interactive direction that Jarman might have investigated further if he were working today. And no matter which way the viewer wanders through this eclectic selection of works, the accompanying sounds (music by Coil and others, choristers singing, Jarman exclaiming: “You get the impression”) are wonderfully serendipitous, synchronising a potent sense between the seen and heard experienced at any time. Are we (Jarman’s audience), being acted on as components in a receptive game of chance? This reviewer watched Death Dance – a group of four naked dancers in a derelict Butler’s Wharf – with the sound of angelic choristers in her ears, only to read a note in Jarman’s hand “a summoning of angels” and then look up and notice an elderly women watching a bride smiling through her wedding day. Was the women watching her younger self or wistfully remembering another time of her life? Not only is Jarman’s audience being actioned with here, all of us in these rooms full of stories are potential narrative triggers for each other.

“It’s got a sort of Andy Warhol feel about it – all the people – the collaborative tribe,” a colleague said. There are indeed parallels, yet in Jarman’s works, an Englishness difficult to pin down is contained and informed by layers of histories, the light and the essence is particular – and perhaps even in the pace and rhythm of the various films, something of this east side of the Atlantic can be perceived.

Accompanying the exhibition, and in memoriam of Michael Derek Elworthy Jarman on 31 January, author and theatre-maker Neil Bartlett installed Jarman’s Angelic Conversation in King’s College Chapel. The film was projected on to a white bed sheet that hovered above the chapel aisle. The smell of hyacinths filled the candlelit space. “What exactly is it that we should be trying to remember,” Bartlett asks on his accompanying information sheet.

I would like to suggest we remember that Jarman can summon the angels, and if we apply ourselves well, then perhaps we can too.

1. Hand-written comment by Jarman in his notebook next to a sketch design for his production of the Tempest. 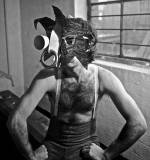 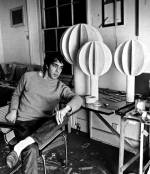