The brightly coloured faces lining the walls of this exhibition show a human fascination with people. Hockney is the lens through which these images have been captured, the characters are the story of his life 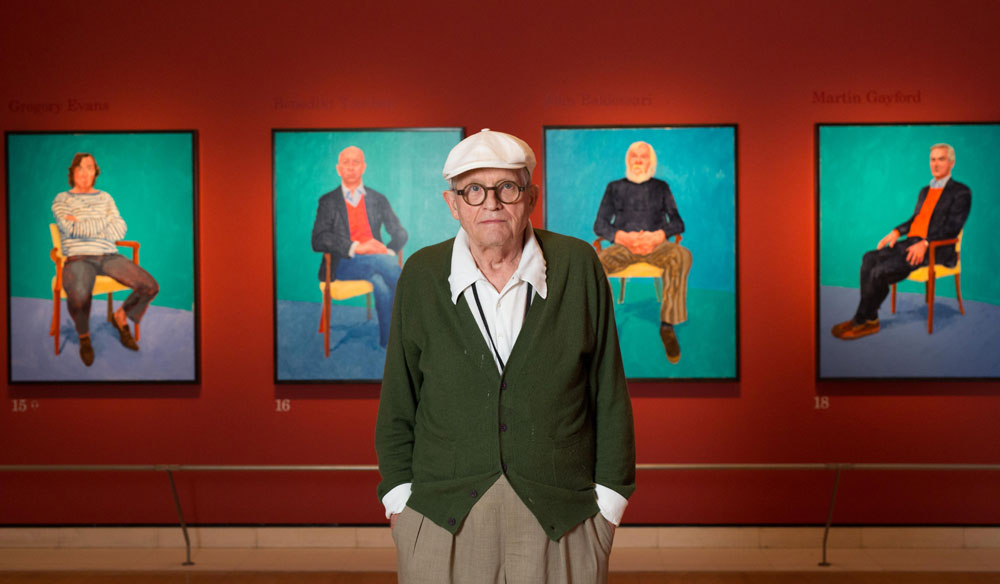 Young Rufus Hale sits on a yellow chair, a notebook in his hand, staring past us with a look of acute boredom. His crossed legs, tie and waistcoat are signs of a boy mature beyond his years, like a miniature businessman, upright and proper, but wishing he were elsewhere, probably outside in the Californian sun. Rufus is the son of artist Tacita Dean, who filmed Hockney painting the portraits for this exhibition on a visit to Los Angeles. Hockney wanted to paint Rufus because the boy reminded him of himself at the same age, and the 11-year-old apparently became very engaged in Hockney’s process. But the artist has chosen to capture something else. He has painted the boy in an adult environment, trussed up like Little Lord Fauntleroy, with a pink face painted without an ounce of the sentimentality that usually accompanies portraits of children. And this is part of Hockney’s genius. He is a fundamentally honest portrait painter who can resist the urge to flatter.

I have to admit to some trepidation as I entered the Royal Academy’s Sackler Gallery. This is an exhibition ambitious in its conception and noble in its ambition, but I was concerned that its repetitious nature would prove its undoing. The 82 portraits and single still life were conceived as components of a single work, all painted on canvases of the same size, using the same chair and background colours in the same studio. This undoubtedly raises the question: is this really a great series of works, or is it the product of a restless workaholic who is no longer pushing the boundaries? The latter is the opinion of some critics, but I found myself wholly engaged by the brightly coloured faces lining the walls of this exhibition, not out of superficial love of colour, but out of a human fascination with people, a stance shared by many of the musing visitors crowding the gallery.

In taking on a project of this scale, Hockney, our champion of paint and observation, seems out to prove that the hand is still better than the lens. “Celebrities are made for photography,” he says. “I don’t do celebrities, photography does celebrities. My friends are my celebrities.” In an age of endless selfies, self-marketing and vacuous, airbrushed models, Hockney’s characterful and often unflattering portraits are just the tonic. What is needed from the viewer is the attention span necessary to stand in front of any one of these paintings long enough to consider the human it depicts. And not only that, but to consider Hockney’s own eye. He is the lens through which these images have been captured; these are the characters in the story of his life.

Most of the portraits were completed in a three-day period and include family, friends and acquaintances – “a 20-hour exposure,” Hockney calls it. Celia Birtwell sits slightly awkwardly, her familiar blond curls recognisable from numerous paintings by the artist throughout the decades. Hockney’s friend and the manager of David Hockney Studio, Gregory Evans, sits back, his arms crossed and legs spread unselfconsciously as though he is simply waiting for a bus that is taking a very long time to arrive. Like Birtwell, Evans has sat for Hockney many times before and the habitual nature of the event pours from his posture. Other sitters are more self-conscious and have dressed up for the occasion, providing Hockney with the challenge of switching the blue and green blocks that form the background so that they complement the various bright hues that have been placed in front of him.

The many attributes of age come through in these paintings, too: the awkwardness of youth, the assuredness of middle age, the despondency of old age. This exhibition is a study of human nature, and I don’t agree with the assertion that these faces are “bland” or “mask-like.” That I took such a strong dislike to some of them is testament to their characterful portrayal. In stripping back the portrait as he has here, Hockney encourages us to examine the people, their body language and their personalities. This is Hockney the psychologist, Hockney the pop artist and Hockney the stubborn Yorkshireman rolled into one, and it is almost impossible not to like any one of these many aspects of this prolific painter. 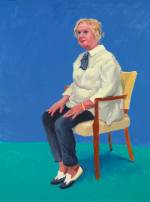 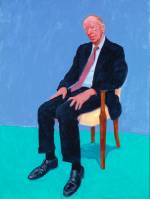 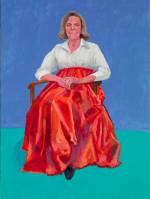 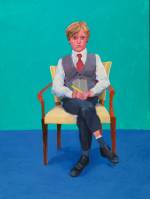 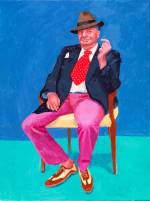 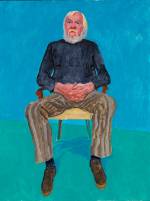