David Altmejd: ‘I believe in the power that art has to generate meaning’

David Altmejd: ‘I believe in the power that art has to generate meaning’

Canadian artist David Altmejd, known for his fantastical sculptures and installations, discusses his current solo exhibition at Modern Art Gallery, London, and talks about heads, hands and the fetishisation of potential

The sculptures of Canadian artist David Altmejd (b1974) are like fairytales; lysergic wanderings into the realm of organic giants, crystallised werewolves and 6ft high birds in well-tailored suits. But as with Angela Carter’s sinister depictions of the make-believe, Altmejd’s constructions only toy with the bounds of fantasy in order to interrogate concepts of a very human nature, those of vulnerability, beauty and decay. As the gold-wrapped honeybees of The Swarm (2011) take flight and the plastercast hands of Untitled 7 (Bodybuilders) (2013) conjointo form a human body, Altmejd’s works endeavour to defamiliarise the familiar and lead cognition to stutter, lead you to think.

With a vast and varied portfolio that has seen him represent Canada at the Venice Biennale in 2007 and present a solo exhibition at Musée d’Art Moderne de la Ville de Paris (which runs until 1 February), Altmejd’s latest exhibition at Modern Art, his fourth show with the London-based gallery, is dedicated to what he calls portraits. A constant leitmotif of his, the head-like sculptures are held on stands and plinths, some ripped open to reveal their crystalline interiors, others the grotesque combinations of two inverted profiles. While these portraits are undeniably meant to shock (one particular head bears an uncanny resemblance to a slab of raw meat), they are also intended to be recognisable: “You can feel a figure,” he states, “because that’s what you live in.” So what do you do when something that you encounter on a day-to-day basis, something that you know, is ripped apart in front of you, physically and conceptually? Well, you think, and that is exactly what Altmejd wants.

David Altmejd: I wouldn’t be interested in every body part. I just think that some are more interesting than others – for example, the head. The head contains everything: that’s where thought happens, that’s where consciousness is, that’s what contains the universe. It is not just a piece of flesh. Symbolically, it’s a sort of egg; it’s an object that contains infinity.

HT: The head, both with and without the body, is obviously a recurring motif of yours, from the severed werewolf head of Untitled (2006) to the full figure works of Untitled (Watchers) (2014) and Untitled 7 (Bodybuilders) (2013). What is the significance of removing the body?

DA: There’s something about the fact that the head can be easily held and put on a table. It becomes a more manipulatable object that I can move around in the studio. It’s a more flexible project, and it also lets me focus on what I think is maybe more important, which is connecting with a portrait. It’s being able to connect with the eyes or the soul, whereas the body is closer to a landscape. I just feel the head is more like a container of the soul.

HT: Does it become less personal if you’re working with bodies?

DA: Yes, exactly, it’s more abstract. When I work on a complete body, I very often forget that it’s a body and it becomes just a sort of mass of material, a physical object. It doesn’t necessarily have a soul; well, I’m not necessarily focused on that aspect of it. It’s a less intimate relationship.

HT: Are the heads cast from your own?

DA: Yes. I’ve started working with models. I’ve done some portraits for the heads, but I’m shy. It makes me shy to have someone stand in front of me. So I tend to prefer working just from my mind.

HT: If you look at works such as Sarah Altmejd (2003), The Eye (2008), or Untitled 8 (Rabbit Holes) (2014), facial features are often completely eradicated. For you, does the face exist in a separate space from the head?

DA: The facelessness makes the head function as a symbol. If you take the face off the head, you are left with a symbol, and then the face makes the effect more intricate and less abstract. The faceless head is kind of an abstract object. I don’t have a plan when I work on a head. I’m just confronted. There’s a physical object in front of me and I’m just trying to really take care of the capacity of that object to generate power. The face diffuses that power and makes it function in a different way.

HT: To continue with the theme of body parts: will hands be figuring in the show?

DA: They will be in the show. Even though I’m only showing heads, I didn’t want this exhibition to represent just a section of my work. I tried to make it contain everything: the architectural references, the hands, and so on. I wanted this show to contain everything that preoccupies me. So the hands are there: some of the heads are made of hands; some of the heads are combined with one hand.

DA: Exactly, I really like that. Sometimes the hand may not be literally present in the work, but I found other ways of showing how the object was made by itself. So, for example, in this show, some heads are made with specific materials. The heads are installed on poles, and at the foot of the poles are bronze containers that I have used to present every material that is used to form the head. All the paint colours that I used, all the different resins, they are dissected. You don’t know if it’s actually a sample from the head, or if it’s the opposite, if it is actually the material that I used to make the head. So it is the piece that is making itself.

HT: It’s very like Escher’s Drawing Hands (1948): a constant circle. There’s a very kinetic feel to a lot of your works, whether in the extrapolated forms held poised behind Plexiglas, or the anthropomorphic sculptures walking up steps or ripping into walls. Does that come from your interest in transformation and metamorphosis?

DA: Yes, there’s a sort of movement, either through the suggestion of transformation, or a sort of formal dynamism. The suggestion is that the object is alive.

HT: What is it that draws you to that energy?

DA: I think it started in my Sculpture One class or Introduction to Sculpture, the first time that I made an object and put it on that table. I understood right away that what made sculpture unlike any other medium was that it exists in real space. It doesn’t exist in a space of representation; it exists in the same space as you, and it breathes the same air. Potentially, that makes it very powerful, the idea that this object you have made has the same relationship to space as you. That gives it a lot of power. I understood that the most powerful object in the world is a person, it is the body. So, instead of thinking that sculpture is in competition with another medium, I think that everything is in competition – if there is any competition – with the body. I think that’s the most amazing thing in the world. The body of the person you love, or the body of the person you hate the most, there’s nothing more powerful than that. That’s why I think of making objects that are able to generate a sort of energy, because that’s the energy that is also generated by the body. How do I do that? I don’t know. I don’t have a recipe.

HT: Your work appears to suggest a reinvestment in the physical.

DA: I like the idea that actual meaning comes from matter. I like the idea that matter is intelligent. Some artists think that meaning comes before the object and that the object is a tool to communicate that meaning, but I don’t like that. I believe in the power that art has to generate meaning. I believe in the capacity of art to build its own intelligence. It’s not just an illustration, that’s very reductive.

HT: Moving from the energy in your work to the pieces themselves. Why do you feel drawn to particular icons or forms?

DA: The choices that I make are very intuitive. When I’m making a sculpture and I have to choose a reference, I think of thousands of references very, very fast. But how do I choose one? I think it’s because it feels as if it has great symbolic potential. To put a werewolf head inside my work, for example, would open a door to an infinite number of interpretations. It’s all about feeling potential. The work is very much a fetishisation of potential. I like that.

HT: If you look at your works from the past few years – The Flux and the Puddle (2014), The Vessel (2011), Le Gorge (2012) – they don’t seem as connected to the human form as this show promises to be. Was it a conscious decision to go back to portraiture?

DA: The representation of the human body is very powerful because you can identify with it. You can feel a figure, physically, because that’s what you live in. You live in your own body so, when you see one, it’s normal that it has a certain power.

I’ve always made heads. Even when I’m working on bigger projects I’m always making a couple of heads on the side, because it’s what I like the most. So it wasn’t a conscious move backwards, it’s all been very natural. For this show, I just decided not to get involved in huge, complicated, technical things. I wanted to really focus and to be alone and connect with the objects, take my time. I’ve had really large-scale projects recently, one after the other, and, in terms of process, it has forced me to work with teams and to become more of a manager than I really wanted to. I needed to go back to just being 100% involved with every cell of the objects that I make. So these heads are the perfect format for me. It’s very, very satisfying. 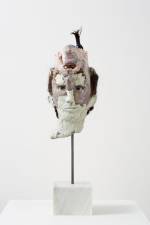 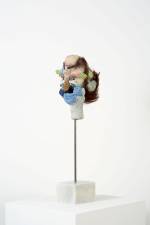 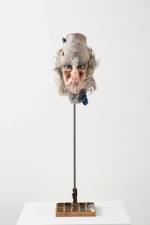 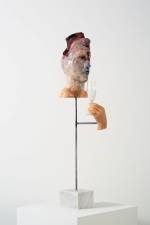 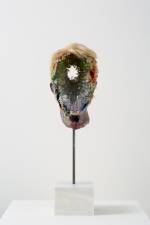 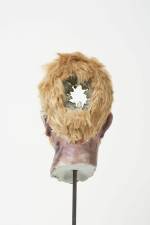 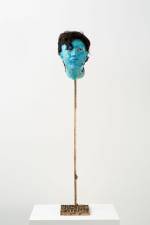