In the opinion of the writer Charles Baudelaire, the 19th-century French caricaturist and painter Honoré Daumier was “One of the most important men, I will not say only of caricature, but also of modern art”,1 and the curator of the Royal Academy’s current exhibition, Daumier (1808-1879): Visions of Paris, certainly seems to share this sentiment.

This exhibition is simultaneously a retrospective, an historically and politically informed account and a thematic exploration of Daumier’s caricatures and paintings. It fits much into a small space, apparently with the purpose of presenting Daumier as a fine artist as well as an illustrator for the masses. The Daumier that we know is gagged and bound and forced into the gold-leafed frames that hang in the RA’s grand galleries, and there has been no attempt in the show’s curation to reflect the vehicles of mass consumption through which most of Daumier’s political cartoons were originally encountered – the French Republican periodicals, newspapers and journals of the 1830s-60s. Fortunately, Daumier’s legacy as a creator of lively, tongue-in-cheek images that appealed to the grass roots of society is maintained through the continued vivacity of his images and historians’ inability to align him with any artistic movement or school.

Despite this, the show is bookended by the standard tropes that accompany biographical histories of avant-garde artists. We start with Daumier’s supposedly subversive submission to the Paris Salon of a classically inspired painting – The Miller, His Son and the Ass, 1849. The story of this painting carries the message that it is impossible to please everyone, and this is interpreted here as an allegory for Daumier’s denouncement of the Salon’s system of artistic judgment. Seeking an alternative route, Daumier turns to Camille Corot, and the influence of the older artist on Daumier’s early painting is demonstrated. Subverting the institution and finding alternative inspiration are covered, then; later, at the very end of the exhibition, we are shown The Artist Facing his Work, 1860-63, an unfinished painting in which an older Daumier reflects on his achievements, and looks to the future. The wall text states that the light falling on the artist’s canvas through the high window is symbolic of “artistic potential”. We are given anxiety and angst and melancholy – typical traits of the creatively struggling artist.

If the aim was to flesh out Daumier’s personality, then this was certainly not the way to do it. The rest of the show, sitting between these bookends, offers dynamism by the bucket-load supplied by the Daumier we know: politically engaged, socially conscious, lively, humorous and impressively observant. The first political cartoon we are shown is Gargantua of 1831, a lithograph depicting an enormous King Louis Philippe being fed the tiny taxpayers’ money by means of a giant ramp leading directly into his mouth. Daumier was constantly under the gaze of the censors from the early 1830s onwards, and Gargantua earned him six months in prison. A charcoal piece entitled The Riot, 1848-52, depicts the tumult of revolutionary France: gaunt, skeletal figures form a heaving, twisting mass, a vortex of passion and destruction that could call even the contemporary viewer to arms. Nearby are six busts of members of Louis Philippe’s government, their deformed features set in unfired clay. Daumier was not generally a sculptor; these busts were used by the artist as models for his lithographs, revealing one of the ways in which the artist was able to make his cartoons lifelike and expressive.

As well as their visual effects, these images maintain their historical context through excellently researched and written wall texts that furnish each piece with details about the specific issue or event depicted, while larger text panels set groups of works in their wider political context. This allows viewers not acquainted with French history to appreciate the significance and symbolism of Daumier’s works without overburdening or patronising them. In treating each image as an individual primary source or historical vignette, the exhibition also pushes to the fore the fundamentally ephemeral, contemporaneous nature of the works that could easily have been lost in such a display.

The second conceptual or thematic section of the show is introduced rather clumsily, but proves to be fascinating and innovative in its approach to Daumier’s later work. Two large, unfinished canvases, both entitled Man on a Rope and made c1858-60, are accompanied by a sudden injection of academia by means of a quotation from TJ Clark’s catalogue essay in which he claims that the subject of these two paintings is not the man himself, but his attention to his body and his environment.2 Looking, focusing and awareness became something to look at, to focus on, to be aware of, since all three had gained importance as a result of shifting social and economic conditions in Paris.

The next two rooms devote themselves to this somewhat narrow theme, and yet in doing so they present Daumier’s work in a genuinely unique way. Criticism, judgment and spectacle become the subjects of series such as The Print Collector, 1850s-60s, and in The Connoisseur, 1860-65; in the latter, the eponymous figure sits idle and alone, studying his hoard with a pride laced with melancholy. In a society in which a newly wealthy middle class can buy and sell artworks, art has become something to own, and the act of looking at it is more frequently private than it is public. By contrast, “low” art forms such as photography provide the ultimate aesthetic of and for the people, although an 1862 cartoon entitled Nadar Elevating Photography to Art, shows that Daumier, in response to the photographer Nadar’s campaign to promote photography to the status of “high art”, had doubts about the necessity of this if the act of “looking” were now something to be enjoyed at every social level as a result of Paris’s burgeoning entertainment industry.

In fact, the exhibition reveals Daumier’s sensitivity to his surroundings most effectively when it turns to his images of Parisian nightlife. The faceless women lapping up the spectacle in At the Theatre (The Box), 1860-65, are contrasted with a behind-the-scenes tableau of performers at rest: the sad clown and exhausted strongman shivering in a filthy wooden setting in The Clown Resting (Hercules and Pierrot in the Wings), 1865-70. Daumier suggests that 1860s Paris saw the introduction of a performative element to urban life that involved constantly seeing and being seen, one that required an unwavering attention to outward appearances and a certain psychological resilience that it was impossible to maintain.

It is with these insights that the exhibition pushes forward our understanding of Daumier’s very complex oeuvre. In not settling on a thematic discussion of his work as the main format of the show, it certainly misses an opportunity, although given how few monographic shows on this artist have been staged in recent decades – this is Daumier’s first solo show in the UK in 50 years3 – there was undoubtedly much ground to be regained in terms of presenting the basic history, style and techniques of Daumier’s work to a newly interested audience. Yet so much is sorely missed, or only touched on – ideas of censorship, the influence of the classical, social division, economic disparity, the role of the popular press in the revolution, and the function of art in time of political upheaval. Perhaps these will be addressed in his next monographic show, in another 50 years’ time. 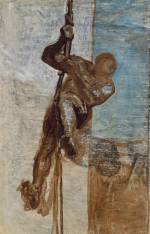 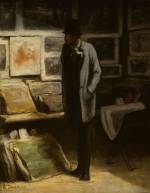 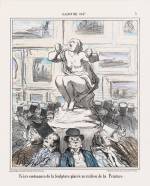 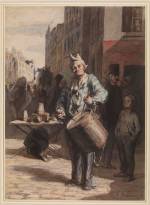