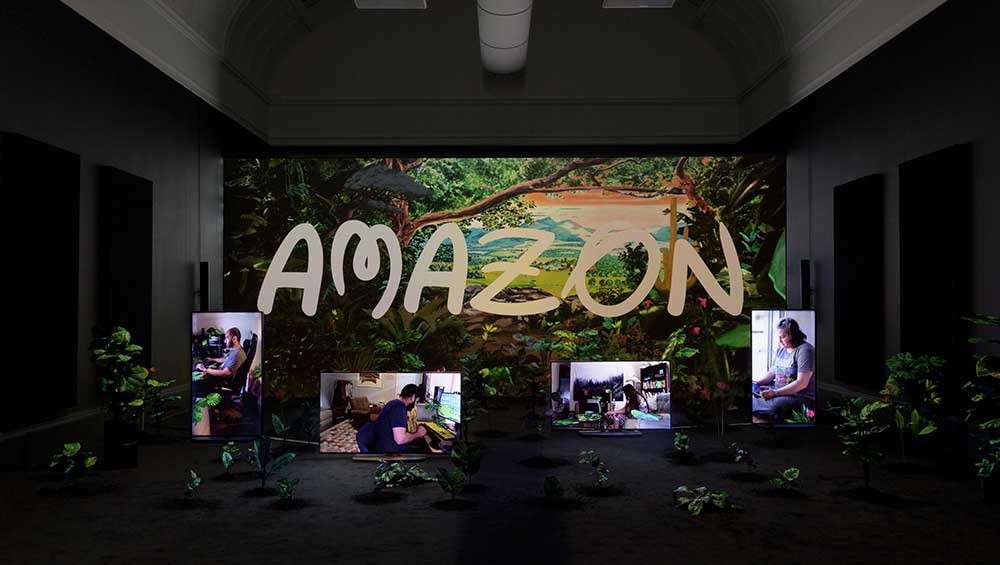 Danielle Dean’s Amazon is a multichannel video installation that explores the exploitative aspects of human labour, comparing specific practices of two giants of capitalism across a 100-year divide. From the 1920s, we get the regimented and inappropriate working conditions forced by Henry Ford on his workers in an experimental Brazilian rubber plantation, and, from the 2020s, the low pay, long hours and isolation of a little-known division within Amazon’s enormous global workforce, Amazon Mechanical Turk (AMT), whose worker’s responses to proscribed surveys are used to enhance algorithmic accuracy.

Dean was born in 1982 in Alabama but grew up in London. She studied fine art at Central Saint Martins (2006) and then moved to California Institute of the Arts where she completed her MFA in 2012. She has been teaching at UC San Diego for the last three years. Her work, which spans video, painting, installation, social practice and performance, investigates the effect of media and cultural production on mind and body. For Amazon, she delved into the Ford Motor Company archives in Detroit, where she unearthed Ford’s strange experiment in the Amazon rainforest, Fordlandia. But it is the other Amazon that will be uppermost in visitors’ minds due to its ubiquity; the sprawling online megamall to which the masses increasingly turn for almost all of life’s essentials and luxuries, regardless of the impact on local retail, local or national economies or global workforce conditions.

It is hard to say where in the film’s loop would be the optimal point to start watching – the curatorial assistant on the door told me it didn’t matter. Where I landed certainly triggered a period of bafflement, but then bafflement is quite a good device for a longish artist film, provided the narrative generates enough suspense to keep the viewer engaged. And I am fully engaged for Amazon’s 25-minute duration, despite having taken no more than a cursory look at the available notes; in that, I am probably no different from 99% of this installation’s visitors. 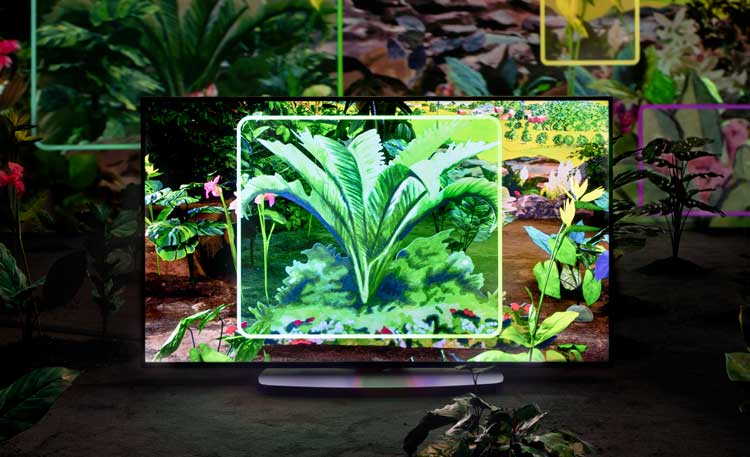 At the point where I arrive in the film, there is a large screen depicting lush, Amazon forest-style fake plants and greenery on a stage set, against a backdrop that looks more like the rolling pastoral scenery of the US or UK (Dean painted this hyperreal landscape in colours that deliberately evoke Disney animations). On one side of the stage is a man playing guitar while a woman in a suit and bowler hat dances. The visual and narrative tone is lush, colourful and cheerful. That tone is repeated on four smaller screens in front, where various normal–looking people (ie, probably not actors and definitely not models) appear to be in their bedrooms, making strange hand gestures. Because I know something about Jeff Bezos’s Amazon and nothing about Henry Ford’s brief Brazilian flirtation, I initially assume that these hand gestures are something to do with packing or stacking boxes, or loading products for delivery, although there is no packing or assembly line in view: each workplace appears to be a bedroom or studio, enriched – for the purposes of this film - with an element of tropical scenery. 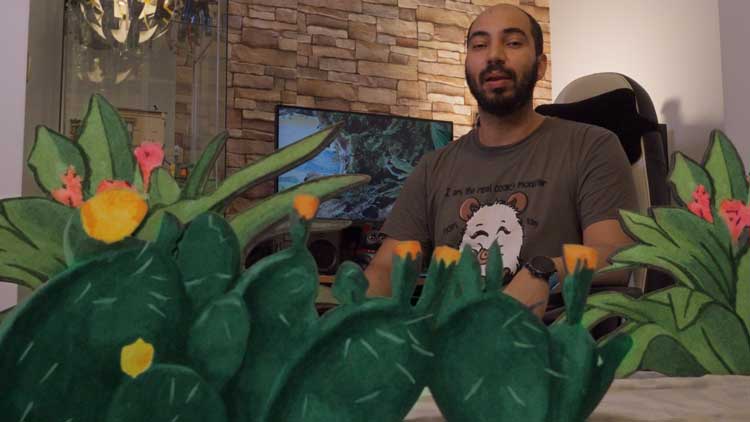 Slowly, the workers start to talk to us, telling us how hard they all tried to get any other job, seeming glad that their Amazon work could fit in around other requirements, such as childcare. What can they be doing for Amazon from their bedrooms, I wonder. They start talking about “hits” and the importance of getting a certain number of hits a day. Obviously, that is a challenge because, as the film continues, they look more tired, more harassed. We find out that if they don’t receive a certain number of hits, they don’t get paid.

At this point, I’m really puzzled. What are the hits they are talking about? Are these people influencers scoring “likes” on social media? They don’t look like influencers, being far from stylishly dressed, and increasingly sweaty. Looking at the exhibition notes, I realise that a hit is a “human intelligence task”, and if these workers don’t complete their assigned task in the desired way, they don’t get paid. One man says he works all the time, has no life, but rarely earns more than $50 (£37) a day. He seems to be American. What kind of western worker would put up with such conditions, such poor pay? That deliberate triggering of questions or challenging of assumptions is another great way in which Dean keeps us engaged as the narrative unfolds.

A new character, a super-friendly woman with curly black hair, starts appearing regularly, and it is not long before I realise that her friendly face is more of a glassy stare, and her cheery intonations sound more like soothing, anodyne management mantras. Soon, we begin to see black-and-white imagery of a different time and place. Clearly this is footage of or around Fordlandia. We learn about the workers being forced to eat western diets and keep western hours – demonstrating a remarkable lack of cultural sensitivity and practical nous by management, given the tropical temperatures that typically require work to be carried out at the start or end of each day. Workers increasingly fell sick, affected by these unusual requirements. Around this point – perhaps to reinforce that this is no documentary, it’s a work of art - there’s an increasing blurring of narrative lines. We see the Amazon US workers eating tinned peaches – as if this is a diet that is being forced on them. There is a playful sequence about bugs, colliding the very real problems for online traders of computer bugs and glitches with the insects of the rainforest; it is the more everyday, household bugs, caterpillars and butterflies that appear to be digitally multiplying in the Amazon workers’ studios. The plantation’s rubber plants were also afflicted with disease, we learn, because Henry Ford’s management decided to plant non-indigenous, Indonesian rubber plants, and forced them close together to boost productivity. This had the opposite effect: they quickly succumbed to disease and the crops failed, as did Ford’s enthusiasm. The plantation shut down just six years later, after the workers rebelled, but not before Ford had insisted his workers avoid the “moral decay” that might arise from jazz in preference for square dancing. It is here, when we see the fading black-and-white footage of the Brazilian staff attempting to do a hoedown that I realise the gestures of Amazon workers I saw at the beginning – which I thought emulated packing and stacking movements – were the isolated home workers trying to link hands for a country reel. 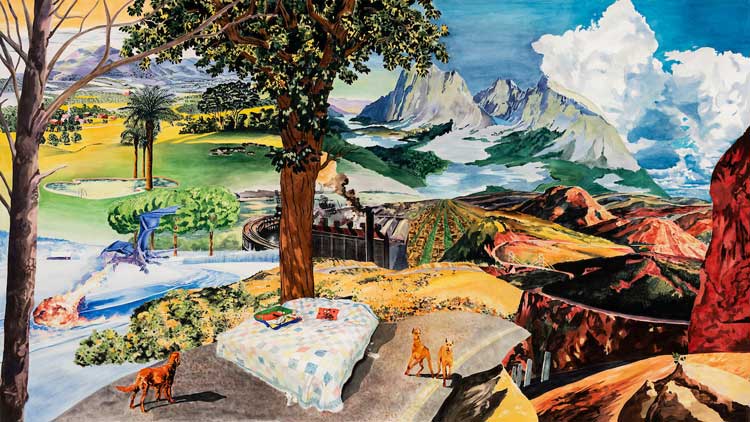 The cocktail of fantastical with documentary footage, animation with stage sets, real characters with pretend ones (Dean herself appears as what can only be a white-suited, beautifully groomed version of Jeff Bezos), contemporary with modern, percolates powerfully inside the brain. It is a heady mixture of the bizarre, the playful and the sinister. One of the film’s major achievements only comes to light in the notes – that these are real (and often still-employed) Amazon workers, whom Dean guided and collaborated with during various lockdowns, as they film themselves in their own homes.

There surely is, as Dean said, in an interview in Tate’s current magazine, “a comparison to be made between the history of a raw material that comes from nature and the mining of immaterial labour under capitalism today”. But there is one thing I would love to have seen flagged up at some point in the installation or film footage: a sense of our own power as consumers not to support systems that are clearly bad, for people as well as the environment. I can always find a more sustainable, ethical, and usually more local provider than Amazon. The AMT workers’ isolated conditions and individual contractor status may preclude organised protest. But there is always consumer protest. If Bezos thought his shoppers cared about the impacts of his profit- and efficiency-driven system, then he would soon have to address these issues. 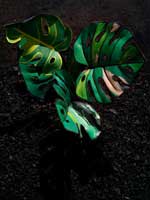 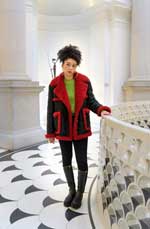