Conrad Shawcross: The Dappled Light of the Sun

Conrad Shawcross: The Dappled Light of the Sun

As well as his epic, sprawling installation that greets visitors to the Royal Academy Summer Exhibition, you can see miniature sculptures by Conrad Shawcross at the Victoria Miro Gallery

Conrad Shawcross is an artist who likes to show his workings. His ambitious sculptures, which engage hands-on with technology and scientific theory, embody a democratic desire not only to reveal the blood and sweat of their making, but also to dramatise the very possibility of construction. The Nervous Systems (Inverted) (2010) filled a New York skyscraper with an elaborate machine that painstakingly twined a rope from spools of coloured thread suspended above. His mechanical structure Timepiece (2013) transformed the Camden Roundhouse into a vast solar clock, its steel arms revolving to chart the minutes and hours in light and shadow. Now, Shawcross has constructed a whole show from his “maquettes” – small models and trial runs for giant sculptures, including one he has recently realised: The Dappled Light of the Sun, an epic installation that fills the courtyard of the Royal Academy – of which Shawcross, at 38, is the youngest living member – and greets visitors to this year’s Summer Exhibition.

Much of Shawcross’s work plays with movements that are apparently random, but in fact are intricately designed; from here stems his interest in the interplay between nature and technology. Of this, perhaps the most vivid instance is The ADA Project (2013-14), in which he and his team deconstructed an industrial robot, and coded it to dance clattering choreographed steps before a live audience. His recent work has revolved around the natural patterns of geometry: from a simple, mathematical form, Shawcross has created The Dappled Light of the Sun, a mammoth canopy made from conjoined tetrahedrons, which looms over the RA’s Annenberg Courtyard. A feat of engineering, industrial in its weathered steel (an attractive rusty brown), it also gives the impression of being somehow organic, changing colour in the sun and extending its reach across the courtyard with “dappled” shadows that evoke a serene forest glade.

The sculpture is impressive from a distance for its size, up close for its intricacy: five conjoined “clouds”, made up of 8,000 welded tetrahedrons of five different sizes, stand on tripods six metres above ground level (each cloud is said to weigh five tons, while the steel, if laid out, would stretch across 12km). The statue of the RA’s first president, Sir Joshua Reynolds, stands by, palette in hand, as if benevolently wondering what modern art has come to. The precision of the individual shapes is dwarfed in comparison with the energy of the whole, which is almost a sentient being in itself – I’m reminded, looking up at it through its spindly legs, of Louise Bourgeois’s mammoth, threatening steel spiders. Smaller and smaller pyramid shapes rise out of the organised chaos, curling round like pincers – the tetrahedron form cannot tessellate, so while each pyramid converges satisfyingly into a point, Shawcross’s shapes are forced into perpetual curves, their tendrils stabbing the sky like claws.

“The Greeks”, Shawcross has said, “considered the tetrahedron to represent the very essence of matter.” Plato thought the elements were shaped of regular solids, which would make fire look a bit like a Shawcross sculpture. Complementing The Dappled Light of the Sun is Shawcross’s exhibition at Victoria Miro, Inverted Spires and Descendent Folds. While Dappled Light stands out in the open, braving the elements, the Victoria Miro sculptures (except for two bold pieces tolerating the terrace) remain closeted inside, their rough bronze at odds with the clean white gallery space. Dappled Light is monumental, horizontal, sprawling, while the sculptures at Miro are miniature (most around one metre tall) and vertical, each using the tetrahedron shape to form a snaking tower.

These simple, compact pieces, though beautifully made, are somewhat underwhelming, lacking the wow-factor of Shawcross’s giant works – so it’s a relief to learn that most of them are studies for Paradigm, a totemic twist of these same tetrahedrons, on a giant scale (14 metres tall and one metre wide at street level, stretching to five metres at its summit). Given that many of Shawcross’s works are titled in homage to scientific discoverers – Paradigm (Ode to the Difference Engine) references computer pioneer Charles Babbage, Slow Arc Inside a Cube was inspired by Dorothy Hodgkin’s discovery of the structure of pig insulin, while ADA is named after Lord Byron’s daughter Ada Lovelace, the first computer programmer – it’s fitting that his next commission will be installed outside the Francis Crick Institute, the new interdisciplinary medical research centre at King’s Cross, London.

Until Paradigm is realised, we can imagine it from these studies: Paradigm Slender, Paradigm Chamfer, Paradigm Study, Paradigm (Solid), Paradigm Exploded and Paradigm Broad. In an interview with Jackie Wullschlager in the Financial Times, Shawcross said that Paradigm is named for Thomas Kuhn’s “idea that science advances by toppling the paradigm. There’s a sense of mightiness but also precariousness. Science builds upon itself but there’s also the moment when it topples itself. Collapse is part of progress, any life cycle needs collapse, decay, death.” Expanding outwards as the tower grows (and Shawcross promises that it’s engineered to be as tall as it can be before toppling over), Paradigm will seem to defy gravity – and we must hope the scientists who contemplate it daily will take the sculpture as an inspirational metaphor for progress rather than presaging imminent rubble.

The maquettes at Victoria Miro, however, are not tall enough for this dramatic sense of precariousness to take hold. They teeter elegantly rather than menacingly, like a ballerina en pointe. As demonstrations of Shawcross’s technique in action, however, they are an opportunity to admire closeup the way he has welded each edge, roughly but firmly, distorting the shapes so they seem to swell smoothly on each level. Each structure appears in two versions, Solid and Structural, its parallel somewhere across the room. The Solid sculptures are the more conventional: sturdy and made of blocks like golden ingots, they twist their way upwards like a corkscrew or a helix. More interesting are the Structural versions, which are skeletal mirrors of the Solids – almost like maquettes of maquettes. A departure from the pattern is Paradigm Exploded, in which triangular fragments of mirror jut from a steel spine like leaves on a tree, producing the same shape as the rest, but in two rather than three dimensions. From a distance, the mirrors almost look as they are floating in mid-air, but between them, the simple internal structure can be glimpsed, jauntily but precisely zigzagging upwards.

The two remaining sculptures are maquettes for Shawcross’s Manifold Series, which takes inspiration not from scientific theory, but from musical harmony. A larger version is on display at yet another current Shawcross exhibition (Conrad Shawcross: Manifold at the New Art Centre, Salisbury, until 26 July), this one in Wiltshire; they’re in dialogue with Three Perpetual Chords, his looping cast iron sculptures that were unveiled in Dulwich Park in April and which represent musical intervals, transforming the octave, the fourth and the fifth into sculpture. His Manifold Studies – stick bases, twined like sturdy rope, grow up into intestine-like twists that spiral out like a cyclone or a porous wine glass – are joyous squiggled flourishes, their labyrinthine ribbons impossible to trace individually.

These static works are not – to me, at least – as impressive as Shawcross’s moving works, which combine dexterity of form with technological nous. Counterpoint (2006) – recently displayed in the atmospheric mausoleum of Dulwich Picture Gallery – spins four articulate arms mounted with electric bulbs; the immediate drama of the work, which produces apparently continuous strings of piercing light from an unpretentious oak structure, is mesmerising. By producing something so dramatic from raw material, Counterpoint brings us closer to “the essence of matter” than anything Shawcross does with a tetrahedron. But his combination of artistry and intellectual curiosity remains thrilling; it will be exciting to see what Shawcross does next. 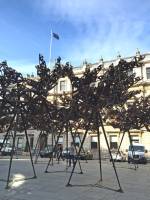 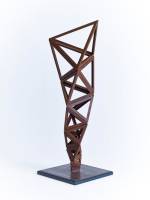 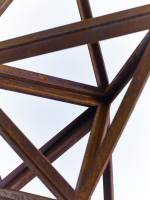 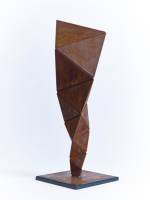 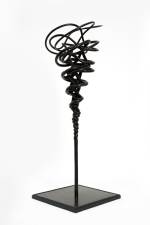