Having attended the Monet exhibition at the Grand Palais on a regular morning like any other paying punter I can attest that one never needs to see another Monet show for this is the definitive, ultimate, career-retrospective, but also that one leaves longing to have seen just one painting properly and in entirely different circumstances.

Indeed the whole machinery of such an exhibition is so laborious, complex and depressing that it makes one ponder anew its basic purpose; perhaps one of the pleasures of art is to share a certain degree of solitude with the initial solitude of the artist whilst free from the bureaucracy and commercialism so prevalent elsewhere, not least around the blockbuster. With the long queues, one after the other, series of security checks, shops and escalators, endless ticket points, the Grand Palais seems to model themselves as closely as possible on the contemporary airport experience, and to a notoriously popular destination.

I avoided much of this, by dexterous use of my press card and even so, felt wretched by the time I finally managed to get to the first room, almost impossible to enter so thick the density of fans. One could argue this is an historically accurate way to look at 19th century painting, certainly a sizeable crowd nearly always accompanied such work, especially in the “Salons” with which Monet had such an ambiguous relationship, and they were made to be seen in such conditions and not in the “White Box” with its emphasis on emptiness. Such an argument, like those who enjoy talking at the opera as part of the historical continuity of its social role, ignores the fact we cannot go back from this new relation we have established with art from our current assumption of optimum access, not to mention that these crowds themselves have certainly, sadly, changed from those of the Salons of old.

But this Monet show really has everything going for it, not least a rather old-fashioned schema, a relatively chronological line through his oeuvre, based around tight thematic and temporal groupings, moving steadily through his extraordinarily varied and long working life. Text is fairly minimal, with basic explanation of his intentions and judicious quotes from contemporaries, and the scenography is extremely pleasing.

But it is the “pulling-power” of the Grand Palais that guarantees the importance of this exhibition, gathering every major Monet from every corner of the globe, to put together a near encyclopedic panorama of all his work, which in his case means not only quantity, but impossibly high quality. Room after room of paintings stretch before one in a bravura display of skill, from high-society portraiture to Impressionistic effects and avant-garde abstraction. Already astonished by his genius one eventually reaches the end of the first floor, to discover that one is only up to 1879; downstairs are more than 40 years of his most radical work.

Here are the “series”, Rouen cathedral and the haystacks, though the show so far has already made clear how Monet nearly always worked in series of sorts. The whole issue of Monet and modernism is considered crucial, with much scholarship and attendant exhibition-history on the notion of Monet as a relatively overlooked artist, especially in his native France, rescued from obscurity by American Abstract Expressionists. Indeed one such exemplary exhibition, on Monet and abstraction, was recently at the Musée Marmotan Monet in Paris, just overlapping with this show.

Every exhibition needs its own “story”, or so the PR marketing and branding industry would have us believe, and the “story” of this show is that Monet has been a prophet without honour within France. The Grand Palais have “restored” him to the French as one of their incontestable greats. Certainly by the end of this show Monet is established not only as a painter of exceptional natural skill but one of rare daring who, over a long period, consistently introduced major shifts in our visual vocabulary as well as reacting to them elsewhere. A comparison with the career of Picasso would emphasize not, obviously, technical similarity but that bold sense of adventure, of continued experimentation and innovation, which distinguishes the truly great artist. 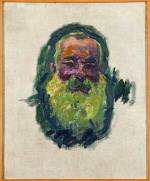