Peter Halstead: ‘People should have their own personal adventure with sculpture’

Peter Halstead: ‘People should have their own personal adventure with sculpture’

Cathy and Peter Halstead talk about Tippet Rise Art Center, the remarkable music venue and sculpture park they set up on a vast ranch in the wilds of Montana, and their desire to create a place with the potential for a deep relationship with art, music and the land 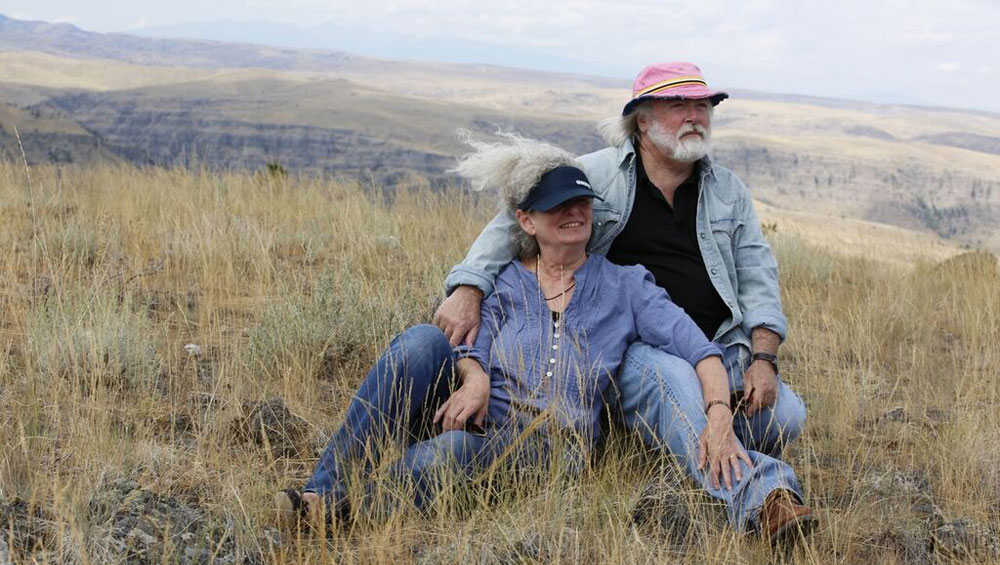 Philanthropists and artists Cathy and Peter Halstead – he is a poet, photographer and pianist, she is an abstract painter – founded Tippet Rise Art Center in 2016, a hub for music and sculpture now in its second season. (If you are wondering, Tippet is the nickname of Cathy Halstead’s mother). This unique cultural centre is located in the wilds of Fishtail, Montana, under big, billowing skies, roughly halfway between Billings and Bozeman, the majestic peaks of the Beartooth Mountains visible in the distance.

Tippet Rise’s star attraction is its seven-week concert programme presented in innovatively conceived and elegantly constructed venues of acoustical splendour. These performance spaces, such as the Olivier Barn, the Tiara Acoustic Shell, an ingenious portable outdoor band shell, and the spectacular open-air Domo, were sited with much deliberation to take full advantage of the land’s stunning panoramas. The most unusual was the Domo, a huge shell of poured concrete by Ensamble Studio (Antón García-Abril and Débora Mesa) that resembles the portal to a prehistoric cave, as much sculpture as architecture, and situated on a high hill. Its flat, grass-carpeted roof has been conscripted for concerts on occasion and to wondrous effect. In addition, Ensamble Studio contributed two equally imposing sculptures that suggest giant archways left, perhaps, by a race of mythological giants. 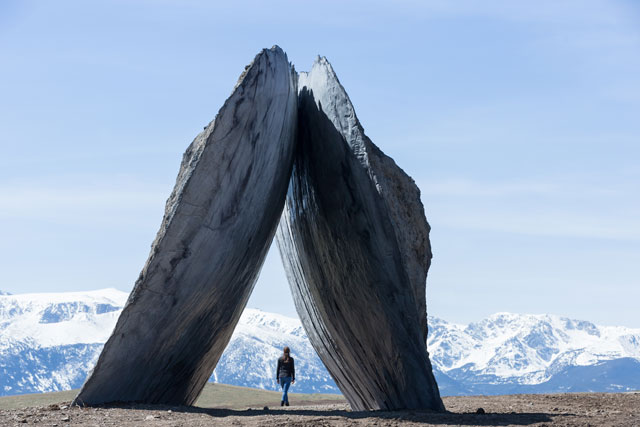 The centre’s other focal point is its remarkable sculpture park (and other artworks), also at times incorporated into a variety of staged productions. Consisting of around a dozen projects at the moment by Alexander Calder, Mark di Suvero, Patrick Dougherty, Ensamble Studio and Stephen Talasnik, they are brilliantly placed throughout the  more than 10,000-acre (working) ranch where sheep and cattle roam, intercut by miles of bike and hiking trails. The sculptures, although few, are scaled to the land and magically interact and hold their own against its vastness. 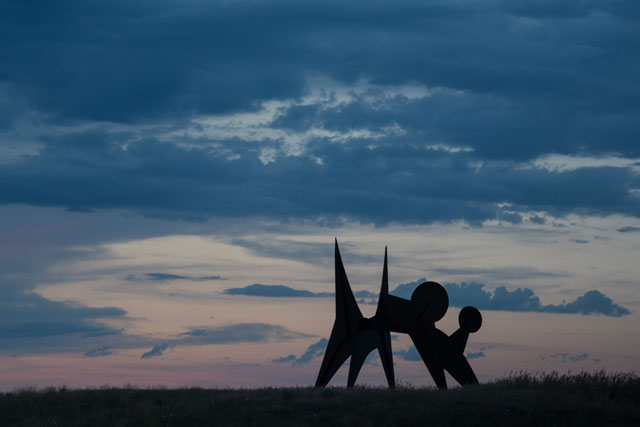 Tippet Rise also prides itself on its self-sustainability, fuelled by solar power and geothermal systems for heat, water and cooling, with electric vans to conduct visitors on tours of the sculpture park. The introduction of buildings and ancillary structures is respectfully unobtrusive and folded carefully into the land’s natural rise and fall to preserve an appearance of untouched nature. The Halsteads have what seems to be uncannily similar points of view – even for a longtime couple – and often finish each other’s sentences. Their goal is to maintain Tippet Rise’s sense of serenity, solitude and timelessness while offering free public access to what they hope is an existential, even “life-changing experience”. Open to all who want to visit by application, the centre limits the number of people permitted on its land to around 30 a day for bikers and hikers –more for tours and concerts, the performances very modestly priced – to preserve the quality of the visit, unlike in many art institutions where the crowds make it impossible to have an intimate, contemplative interaction with the art and its environs.

The following is an edited excerpt of a conversation between Lilly Wei and the Halsteads at Tippet Rise.

Lilly Wei: Would you tell me how Tippet Rise came into being?

Cathy Halstead: There are a few strands to that story. My love of art began as a teenager – actually, even younger. My parents loved and collected art and I was always drawing and painting. I was given a Calder when I was born and one hung in the dining room over the table. My parents hung my work with the Picassos. So art has been part of my life for ever. Peter and I don’t think of ourselves as collectors, but my mother definitely was.  Our home was filled with art and that was something I very much internalised. Being a painter myself, I was always very passionate about other people’s art as well as my own. 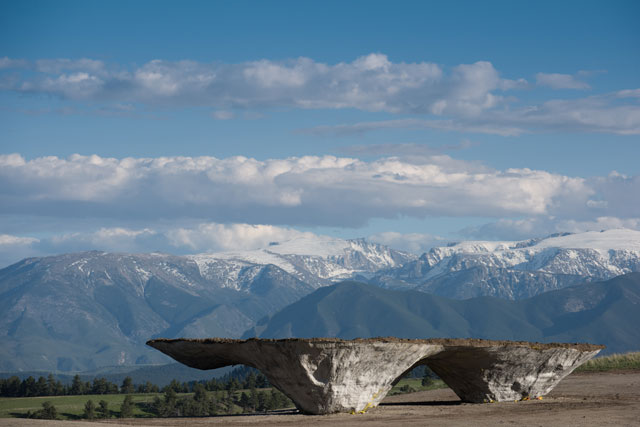 LW: Did you model Tippet Rise on other outdoor sculpture parks?

CH: Going to the Fondation Maeght in the south of France as teenagers was important for both Peter and me.

LW: Did you know each other then? Did you go together?

CH: No, we went separately, but we’ve known each other since we were 16.

CH: What we saw there among the trees taught us what art can be outdoors in a beautiful setting.

PH: It’s on a bluff with the Mediterranean below and has only six acres, but it feels infinite.

CH: We did go to Storm King [in Cornwall, New York] together for the first time. It must have been 100F and they had the sprinklers going …

PH: And we ran through the sprinklers…

CH: And got soaking wet and saw the Mark di Suveros and the gorgeous [Isamu] Noguchi sculpture on the hill by the house …

PH: And the Alexander Libermans and the David Smiths …

CH: And the other extraordinary artists. It was wonderful to be able to spend all that time in that beautiful expanse with all that gorgeous work. We had such an amazing experience and it has stayed with us. 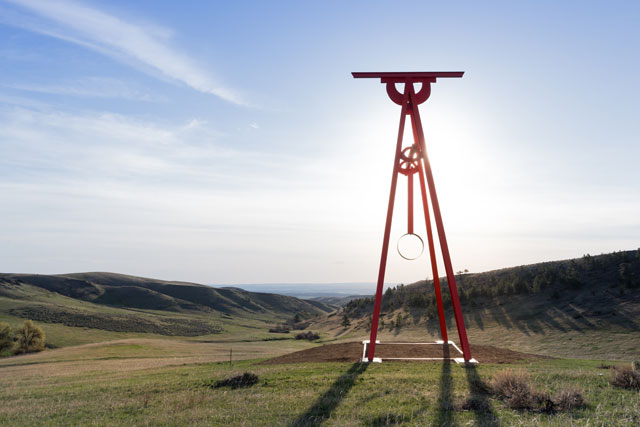 LW: And other strands?

PH: We would go to Caramoor [Center for Music and the Arts] outside New York City and listen to music; my family’s farm was across the street in the old days, but it was sold around 1906.

CH: One particular night we were at a concert at the Venetian Theatre [at Caramoor], which wasn’t covered and it began to pour so we were all invited – around 60 of us – onto the stage, which was protected.

CH: I love being that close to the piano and the pianist and to have that shared experience. It became part of what we wanted for Tippet Rise. And we had fallen in love with the beauty of this land many, many years ago.

PH: And the same with sculpture. People should have their own personal adventure with sculpture, whether it’s at Storm King in New York or Louisiana or TICKON (Tranekaer International Centre for Art and Nature) in Denmark.

PH: We loved that there was no one else there except us. We were on our own reconnaissance. We felt it was our sculpture park. That was very special. It was a deeply personal experience and, again, we thought, this is how it should be. We felt that way about Storm King, also. And we said, what if we could have that in America? Where people could walk around and have their own personal experience with the sculpture? It would change their lives.

CH: We wanted to continue in the line of those who created the art and music and museums that made it possible for us to become who we are, and build a place with the same kind of potential for a deep relationship with art, music and the land.

PH: But we wanted to do it without the infrastructure of a museum, where it could all be found outside, in nature. 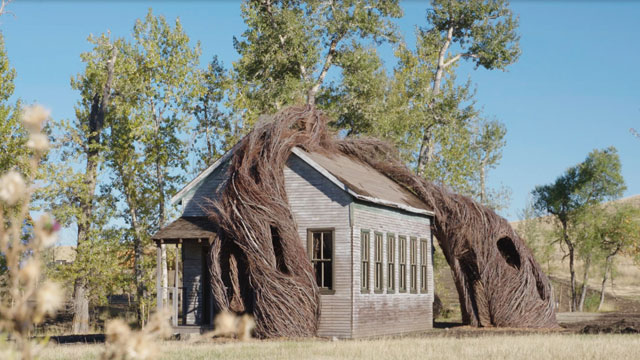 LW: Would you talk a little about the placement of the works?

PH: We feel that each sculpture needs its own valley, its own space. It doesn’t need another sculpture next to it. It’s like putting two pianos in a room – one would absorb the sound of the other unless both are being played. We never want to grow to the point where the works are too close together.

CH: That’s true, unless there is some beautiful reason for it, such as a specific dialogue. But we love the land and we want to be very, very careful, very, very thoughtful about what kind of work becomes part of Tippet Rise.

PH: Everything’s been commissioned for the land except the Calders and Di Suveros. We wanted the artists and works to address the land and how it reaches up to the sky and the things hidden underneath it, the undertones and overtones that are invisible but nevertheless shape the world that is, to follow it over the lip of the ocean and climb the mountain, to address the cosmology and geology of the land.

CH: We think deliberately and we want Tippet Rise to grow organically over time. We are not in a rush to add other works, but we are very open to the idea of adding when we come up with something that is right for the land here. 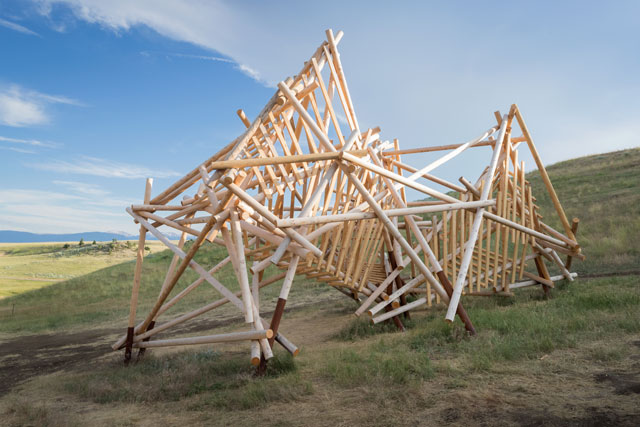 LW: Could you talk a little about one sculptor you commissioned – Steven Talasnik, perhaps?

CH: We went to Storm King to see a work of his installed there at the time and, after seeing it, we asked what would happen to it when it left. So, we were given his number and I called him and asked him and he said he was going to burn it, since it would be falling apart. That’s how we started talking to Stephen. We talked to him for four years.

PH: And we have hundreds of hours of Stephen talking about his work; he’s very articulate.

CH: During that time, we went to his studio, we bought work, and he made sculptures for all different parts of the ranch as possibilities. But when we built the ranch, he had another idea, a work for the East River in New York that had liability issues. We said he could build it here and that became Satellite No 5: Pioneer, and it’s enormous.

PH: Stephen chose that location and once we decided it would be Pioneer, the construction began, which was literally by trial and error. It took nine months to build but we were delighted by the time given to thinking about it. It was a work in progress and exactly what we like to do – to think with the artist and see how the land becomes part of it. It’s our ideal and it’s what we were able to do with him. 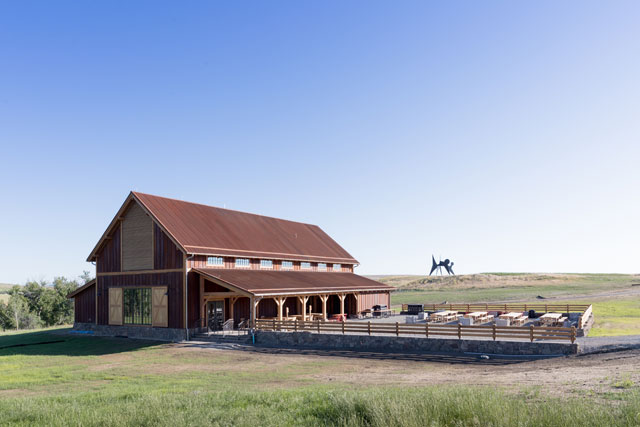 LW: Are you considering temporary exhibitions?

PH: Yes, we are thinking about that. We have lots of interesting ideas, but this is just Tippet Rise’s second season.

CH: What we want to express at Tippet Rise is how we are so touched by the connection that sculpture – or architecture on the edge of sculpture – can have with landscape, with very astonishing landscape, which is what we have here.

PH: When we saw this ranch, we said it cried out for something unique, for something that didn’t exist yet. So the sculptures we have here only set the parameters. They are actually created by the land itself.

CH: This is not ours; this is what is here, this gorgeous land. We want everything we put here to speak to the land, to be meant to be here.

LW: You are both artists. Has creating Tippet Rise influenced you, and, if so, how?

PH: We become friends with everyone who comes here and it has changed us. How could it not? And it affects what I do; I write poems based on the Mark di Suvero’s sculptures, for instance.

CH: For me, what has been inspirational is the way artists, musicians and the audience, especially the schoolchildren who come here, have been inspired and that touches me. We feel a surreal sense of nature here. It affects the way people make music, make art. And the light is very special. There is something wonderful about Montana, the big sky, the rolling grass, the mountains in the distance. I feel the electricity, the charge on this land as something really visceral, really special. And the art, music, people and land come into syzygy. Almost everyone feels it.