From kinetic sculptures to ‘do-it-yourself machines’ and scorched animal skulls to self-destructing golden phalluses, Tinguely courted controversy and spun spectacle throughout his life. Here, the artist who fought against being ‘museumised’ is subjected to, well, just that 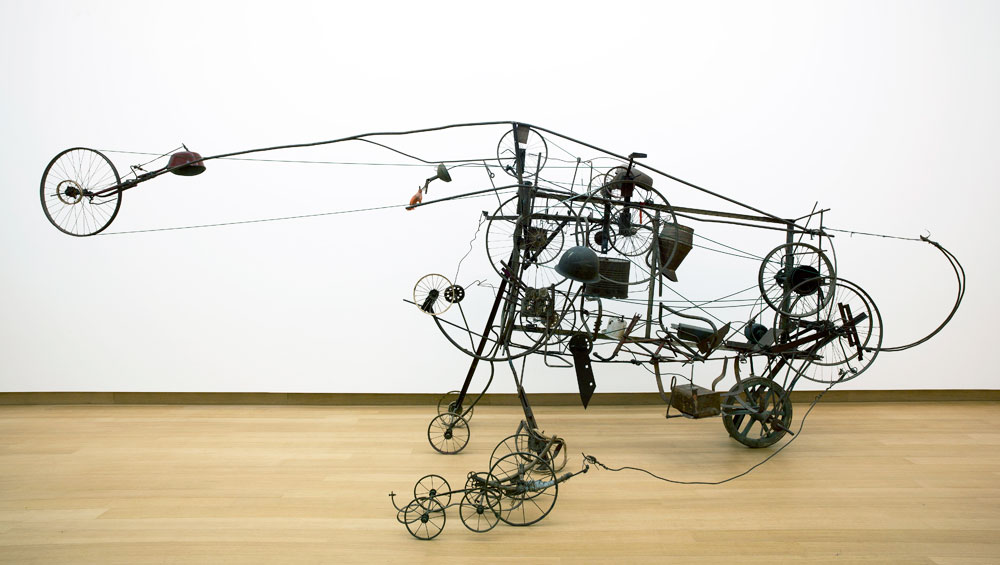 “I wanted something ephemeral, that would pass like a falling star and, most importantly, that would be impossible for museums to reabsorb,” said Swiss artist Jean Tinguely (1925-91), best known for his kinetic sculptures or metamechanics, of his equally famous self-destructing installations. “I didn’t want it to be ‘museumised’.” It is a moot point then, that, to mark the 25th anniversary of his death, the Stedelijk Museum, Amsterdam, where Tinguely co-curated two seminal exhibitions in the early 60s, should (a) be hosting such a comprehensive retrospective and (b) be showing 166 works, 62 of which are machine sculptures, and only 42 of which are, intermittently, functioning. Would an artist who so railed against the white cube walls of formal galleries – “The more immaculate the gallery was and the larger and whiter the museum, the more repulsive were some of the machines I turned up with” – really have wanted his life presenting in such a documented manner, with drawings, photographs, letters, newspaper cuttings, film clips, patent applications, and all sorts of extensive archival material? What could be a more textbook example of being “museumised”?

Tinguely began life as a window-dresser, and his early wire sculptures, dating from 1948, are simple three-dimensional drawings, as might be found in a department store Christmas display, yet quite clearly responding to big-name artists of the time, such as Alexander Calder, Kazimir Malevich, Paul Klee and Joan Miró. The first room of the exhibition is filled with these joyous contraptions, alongside quick working sketches from the early 50s; early meta-mechanical sculptures, painted in red, yellow, white and black; and huge black-and-white wall reliefs – white on black, black on white and white on white – like Henri Matisse’s cut-outs might look after an explosion. The visitor is immediately caught up in an enthusiastic wave of mad-professorness, curiously inspecting these intricate, fragile, spidery creations, and breaking into a smile at the more lifelike – albeit alien-lifelike – embodiments in pieces such as his collaborations with Yves Klein Excavatrice de l’espace (1958) and Perforateur monochrome (1958).

Starting to push the boundaries and raise questions about the nature of art and the artist, in 1959, Tinguely presented a series, at Galerie Iris Clert in Paris, entitled Les Méta-Matics de Tinguely: les sculptures qui peignent (Tinguely’s Méta-Matics: sculptures that paint). On entering the gallery, visitors to these so-called “do-it-yourself machines” would receive a pre-signed sheet of paper to feed into the machine. They could choose the colour and position of the pen, and decide for how long the machine should operate. They would then be able to leave with a freshly drawn abstract artwork of their own. During the first Paris Biennial that same year, Tinguely was banished to the street with his Méta-Matic No 17. “People were furious,” he recalled. “No one knew exactly where the art was to be found. They asked me, is the art in the apparatus, or is it in the result? I said: ‘It is in between.’” Alongside the machines themselves – sadly sitting here in retirement – there are many photographs and also documentation of a performance at the ICA, London, in November 1959, when, following a reading of Tinguely’s manifesto, Für Statik, during the event Art, Machines and Motion, there was a performance with two cyclists powering one of his Méta-Matic machines, turning three kilometres’ worth of paper into “abstract art”. Members of the public became buried under the mass of paper, and the police had to be called when some sheets ended up in the street.

Between 1960 and 1970, Tinguely turned to making four significant self-destructing installations. A brilliantly hung room shows footage of these, including one film of him and his second wife and oft-collaborator, fellow artist Niki de Saint Phalle, dressed as Bonnie and Clyde in the Nevada desert, for Study for an End of the World No 2 (1962), and the quite literal climax of La Vittoria (1970), in which he presented a giant golden phallus, complete with testicles, in front of the Duomo in Milan, and allowed it to go up in flames. Eight thousand viewers watched it “ejaculate” dynamite and rockets on the occasion of the 10th anniversary of the nouveaux réalistes artists’ group, of which Tinguely, de Saint Phalle and many of their friends and collaborators formed a part. The Italian press, no doubt dumbfounded, made no mention of this event the following day.

When the press did respond to Tinguely’s work, however, opinion was mixed, as a film documenting the Dylaby exhibition he co-curated at the Stedelijk in 1962 shows, with comments such as: “Haven’t artists anything better to do?”; “A sign of modern times”; and “I don’t know if it’s art really, it’s fun …” The exhibition itself was a lively, interactive, labyrinthine installation, and followed on from the equally controversial Bewogen Beweging, a retrospective of moving art, the year previously, that ended up with a police report being filed against the museum’s then director for “openly exhibiting an object that offends public decency” (for the inclusion of a dark, erotic work by Robert Müller).

De Saint Phalle plays a pivotal role throughout the exhibition and an entire room is given over to Hon, more recognisably one of her key works than one of his, albeit a collaboration between the couple – as, indeed, were many of their great legacies, including the Stravinsky Fountain (1983) alongside the Centre Pompidou in Paris. Hon, the 28-metre-long, walk-in construction in the form of a reclining pregnant female, or “nana” (the name given to de Saint Phalle’s bulbous female sculptural forms), is documented here with a scale model; full-wall colour image showing the doorway through the vagina; letters-drawings (another artistic object common to both Tinguely and De Saint Phalle); a copy of the newspaper handed out to visitors; a De Saint Phalle work (Tête blanche, 1970); and a small mechanised Nana Machine (1976), also a collaboration between De Saint Phalle and Tinguely.

While works such as this appear colourful, bright and largely full of fun, both De Saint Phalle (who was abused by her father and later suffered periods of depression and suicidal thought) and Tinguely had darker sides to their characters and their work. The exhibition culminates in what is the centrepiece of the Tinguely Museum in Basel (a permanent “museumisation” of his life): Mengele Totentanz (1986) – a room full of rusted cadavers comprising 14 individual parts with a central high altar decorated with a huge skull. This is a fearful, grotesque work, and most certainly no longer light-hearted fun. In December 1985, Tinguely had undergone heart surgery and lain in a coma for several days. This experience affected his whole outlook, and, along with the witnessing of a devastating fire near his home in Neyruz, which raged for two days and three nights, gutting a farmyard and burning alive the animals, fed into this majestically macabre masterpiece. Working with found objects, as had become his wont, Tinguely collected scorched items from the ashes – beams, agricultural machinery (made by the Mengele company, the family of the notorious Auschwitz doctor) and animal skeletons – and assembled them into this monstrous memento mori, invoking “hellfire” (his description of the flames he had seen) and the atrocities of the Nazi concentration camps alike.

Tinguely died of a heart attack on 30 August 1991 and was given a state funeral in Fribourg, which was televised and made the front pages of all the national newspapers. His coffin was paraded through the streets to the cathedral accompanied by his tractor sculpture, Klamauk. A lover of spectacle through and through, Tinguely described the relationship of art and play as: “To play is art – consequently I play. I play enraged.” Movement was the defining feature of his oeuvre and, while it is fascinating to study his machines even as they lie still, this animation was truly the key part of their raison d’être, integral to their concept. It seems a shame, therefore, that so many of the machines, for so much of the time on display here, cannot be operated. Reasons of fragility are given, but this doesn’t seem to be an issue in the superbly animated and participatory museum in Basel, where visitors can press buttons to animate artworks almost at will. So it is disappointing and aggravating to be caught up in large throngs of visitors, crowding around various pieces in agitated suspense, before rushing headlong towards the site of action, and, when one does finally begin to move, arriving after the best part is already over, with those at the back having no chance of seeing anything. Given his resistance to being “museumised”, I can’t help but feel that Tinguely would have been sad to see these empty corpses being preserved so preciously, when, a lover of speed and destruction himself, he would surely rather have seen them crash and burn in action. 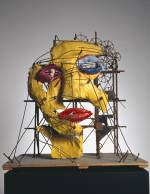 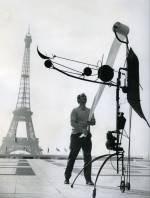 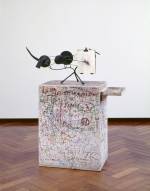 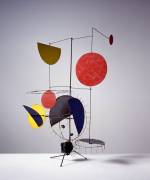 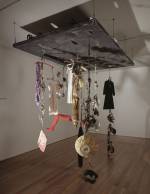 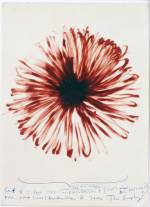 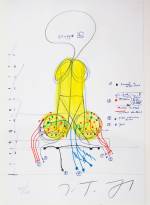 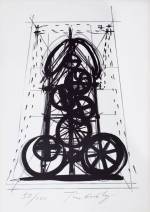 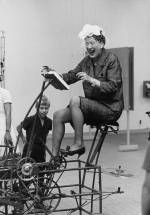 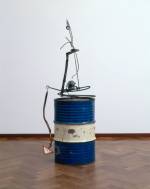