Questions about the nature of the photographic image have yielded a plethora of debate, most controversially, perhaps, through the ideas put forward by Roger Scruton. In Photography and Representation (1983) Scruton describes the photograph as lacking in aesthetic properties, in virtue of its transparency: any interest in the photograph comes about through an interest in the subject-matter. So, we might say that when looking at a photograph, we are looking through a medium at the objects, and in doing so we become aware of the properties and relations possessed by the objects alone; and any aesthetic interest arising from the arrangement of objects supervenes upon those properties and relations attributed to the photographed objects. Kendall Walton (1997) takes the transparency claim a step further by denying that one is aware of the medium when one views the photographed object.

From the other side of the debate, Dominic Lopes (2003) has put forward a view whereby the photograph, although a medium through which a subject becomes aware of an arrangement of objects, has its own intrinsic qualities, which amounts to more than just the act of rendering: for instance, the photographic objects can be said to possess certain details that could only be captured by the shutter speed of the lens, as when one looks at a image of the pattern created by the impact of a falling object on water, or when one views the image of a night scene composed of red and white lines of light created by fast moving traffic.

In Olivier Richon’s work currently exhibiting at Ibid Projects, one is aware of the medium and of its being complicit in the way the objects are presented. And although one might say that the medium has characteristics that affect the viewing of the object, one also sees that the objects themselves need not be taken at face value. These photographs should not be seen as making reference to, or of capturing a portion of, the outside world, as is the assumption made in both Scruton’s and Lopes’ respective arguments, but the objects in them can also be viewed as markers for other modes of depiction: those of still life painting, such as the work of Chardin, Caravaggio, Heda, as well as the quixotic imagery, a lobster telephone or a melted clock, exemplified through the paintings by de Chirico and Dali.

When Derek Jarman composed the scenes in his film Caravaggio (1986), he did so with the sensibility of a painter. Jarman understood light and the way it could affect the appearance of colour and form; and he understood, and took care to include in his shots, the negative forms created by shadows, for the shadow can be seen as a means of enhancing the presence of something, making it appear more solid. Jarman drew directly from Caravaggio’s paintings, especially in respect of the angular nature of the light, and the way it enhanced the sculptural qualities of the objects, and of the characters in the film.

The dramatic effects created by this type of lighting seemed to transform Caravaggio’s own work, making it appear as if it were a stage scene, and the characters, say, those in the Last Supper, appear as actors. In this way, one might say that the work of Caravaggio lends itself to the camera, whether it is it in virtue of the frozen moment, or that of the filmic image.

Likewise, Richon approaches his compositions from a painterly direction. When he positions an object in a way that protrudes off a table, he is making reference to the way still life painters, such as Chardin, display their understanding of perspective. Similarly, his use of draped material, especially in the work Enigma (2004), where it covers the table and its contents like a shroud, can be seen to echo the use of draped fabric within the gamut of traditional still life painting. It is the rendering of fabric, of silk and of velvet, that enables the painter to exhibit his technique of chiaroscuro: that of giving something volume through the use of shading.

Through the use of incongruous elements, say, the placement of a lobster against a background of books, Richon seems to evoke the work of the surrealists, in particular, the motifs in Dali’s paintings. And when he photographs a dog in profile, he seems to capture the poised formalism that is present in Stubbs’ animal paintings.

Although Richon makes reference to the traditional use of pictorial elements, he never goes so far as to imitate painting. For when he presents an arrangement of books, or a monkey handling some fruit, he does so upon a photographic table and under the harsh illumination of the tungsten lamp. There is no pretence at being anything other than a photographic staging, or that the uniform grey surface behind the displayed items is any more than a photographic studio backdrop.
So, too, one might say that Richon is careful to include the environment external to the photographic objects, however obliquely. Several of Richon’s images use the reflective surfaces of the photographed objects as a means of portraying the interior space beyond the photographic set-up. For example, Generic Still Life, with Glasses (2008) depicts a number of wine glasses positioned against one another in such a way as to produce reflections of doors, walls and, perhaps, a glimpse of a window, as well as capturing the glare generated from the studio lamps.

In this respect, Richon’s work can be seen in relation to the Brechtian principle of exposing the means of production. 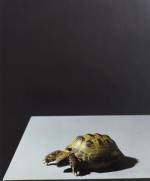 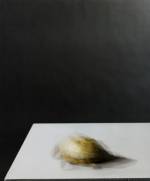 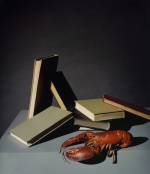