Bhupen Khakhar: You Can’t Please All

Bhupen Khakhar: You Can’t Please All

Whether depicting the pathos of everyday tradesmen, the union of same-sex lovers, or the embattled duality of a body riddled with cancer, the Indian artist’s wry humour combines with his vibrant palette to create compelling narrative paintings that speak to viewers across the globe 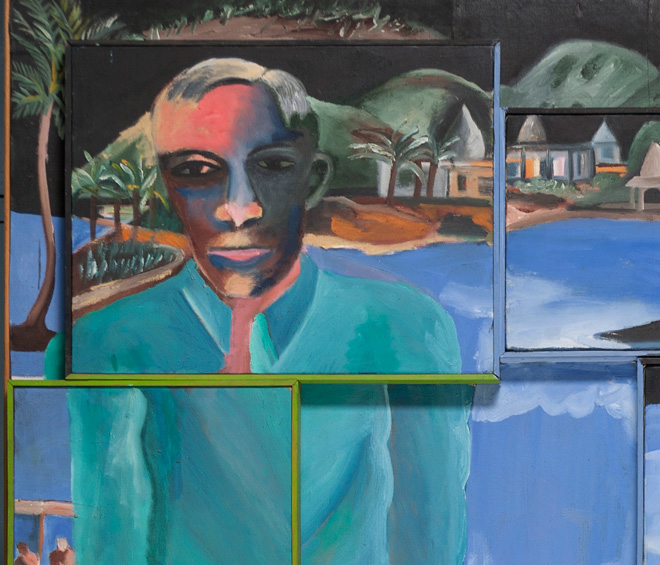 From a distance, the paintings in this exhibition look like large-scale Indian miniatures, with their vibrant palette and simplified, flat, illustrative characters. Look more closely, however, and there are floating figures that could be from Marc Chagall, foliage that looks like something from Henri Rousseau, elements of pop art, and then, uniting it all, a devotional style that could be straight out of 14th-century Sienese painting. This stylistic symphony is punctuated by a wry humour and narrates contemporary scenes – often multiple scenes per work – of Indian life: the life of ordinary workers and tradesmen; of the artist and his older, male lovers; and of the degeneration of his body as he fights, and ultimately loses, his battle against prostate cancer. Comprising 91 works from across five decades, this is the first international retrospective of the work of Bhupen Khakhar (1934-2003) since his death and, according to incoming Tate Modern director Frances Morris, it is “part of the spirit of the bigger international story that the new Tate Modern [to be opened to the public on 17 June after its £260m extension] is dedicated to”.

This political aspect is drawing the exhibition both praise (for widening the version of art history shown to the British public) and criticism (for being no more than just a politically correct gesture and disregarding the quality – or lack of quality – of the work), and it is true that, with paintings quite this steeped in narrative, the average visitor to the gallery might find him- or herself struggling to identify without some prompting as to the sociocultural references at hand. That said, there is much that can be drawn from the works with just the basic information provided in the wall texts and, moreover, need one necessarily always comprehend every last dot and dash in order to enjoy something for its aesthetic merits? This is perhaps the biggest misconception of people who worry about going to a gallery because they “don’t know enough” – and it is a shame, because it is only through looking (and then perhaps reading a little background or context afterwards), that one learns anything at all. I would thus urge would-be visitors not to be put off by a lack of familiarity with Indian culture or history, regardless of what some critics say.

Besides, Khakhar’s wit radiates from his works and certain references cannot be misconstrued. The overarching concern of his work is sexuality and there are many homoerotic scenes – some less veiled than others. The early work, Tiger and Stag (1970), for example, carries an undeniable charge; the window cleaner, in the painting of the same name (1982), brazenly waves a so-obvious-it’s-comical phallic hose; the accordion books depict scenes of an overtly sexual nature; and then there are works such as My Dear Friend (1983), with their tender evocations of devotional love, as championed by the Bhakti spiritual practices, in which Khakhar was more than a little interested.

Khakhar was born in Gulalwadi, Bombay, and it was his trips to the UK in 1976 and 1979, and his friendships with the likes of Howard Hodgkin and David Hockney, that first enabled Khakhar to experience life out of the closet. His painting, You Can’t Please All (1981), acquired for Tate by Sir Nicholas Serota in 1996, and from which the title of this exhibition is taken, is understood to be his coming out statement, with the naked man, watching a scene from Aesop’s Fables from his balcony, taken to be a self-portrait.

A writer and playwright, who wrote short stories and satire in Gujarati, Khakhar was part of the literary scene as well as the artistic one and his home became a gathering place for the exchange of ideas. He thrived on social interaction, as can be seen in his homages to homosocial settings, such as the barber’s and the tailor’s shops, especially in contrast to his grey, drab painting, Man in Pub (1979), which reflects on his experiences in the UK. Despite his artist friends, Khakhar found this modern urban environment dismal and alienating, a place where men drank alone, returning to empty, lonely bedsits, repeating the same humdrum work routine every day. The scenes down the left-hand side of the canvas are bleak and Hopper-esque. Back in India, Khakhar became associated with the Baroda Group of artists, looking to indigenous subjects in rebellion against the more mainstream modernism of India’s dominant art movement, the Progressives, and celebrating these as the first generation to decolonialise its art.

Khakhar only began his artistic career in his 30s, having previously worked as an accountant. His application to study fine art at Maharaja Sayajirao University, Baroda, was rejected due to lack of experience, so, instead, he completed an MA in art criticism, no doubt congenial to his raconteur’s sensibility. In 1989, Khakhar worked with Salman Rushdie on a special edition of two stories for which he produced a series of woodcuts. The author has since said of the artist: “He painted like I wrote.”

Khakhar’s works shocked audiences from the outset with their unashamed frankness, described by Tate Modern director emeritus and co-curator of the exhibition, Chris Dercon, as “like a show and tell”. Some works might be seen as almost iconoclastic, but they were all made with a deep understanding and love of tradition, with Khakhar seeking to find a space for himself to live within the tensions of being a liberal gay artist in a country still dogged by colonial laws.

Tragically, at the height of his career, Khakhar developed prostate cancer. Perhaps unsurprisingly, however, he continued to employ his wry, subversive humour to tackle this difficult subject, using the Bollywood trope of the “double-role” – one actor playing both the hero and the anti-hero – to portray his battle with the disease. As his illness progressed, this humour became increasingly dark. Idiot (2003), for example, which is one of his last paintings, shows a seated figure laughing and pointing at a man, who is urinating into one of his shoes while looking horrified at his loss of dignity. The subject demands both ridicule and compassion, and the pathos – and perhaps bathos – of the artist’s early works is rekindled to profound effect.

Whatever the story at hand, Khakhar’s paintings narrate a lively, humorous and vivid tale, not shying away from any uncomfortable exposure. Once stating that it was an artist’s job to be vulnerable and that a painting must reflect his weaknesses, Khakhar, through doing just this, has turned any potential weakness into strength, or, in the words of his friend and fellow artist, Ghulam Sheikh, “something commonplace into something magic”. 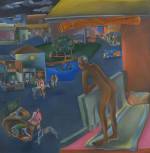 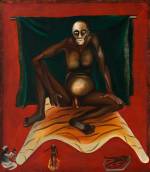 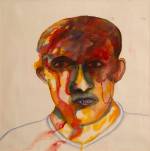 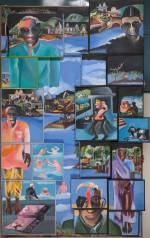 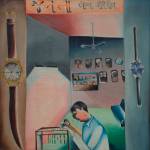 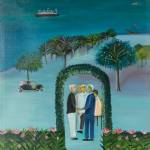