The Geffrye Museum is clear evidence of the gradual revival of Hackney Wick; indeed, of this whole East End part of London, about to be transformed as part of the 2012 Olympics jamboree. A new London Underground station will also be established. The Geffrye Musuem has been in existence for several years, but recently, the architect, Nigel Coates, completed a new core to the 17th-century building with its extensive alms houses and excellent collection of English furniture. 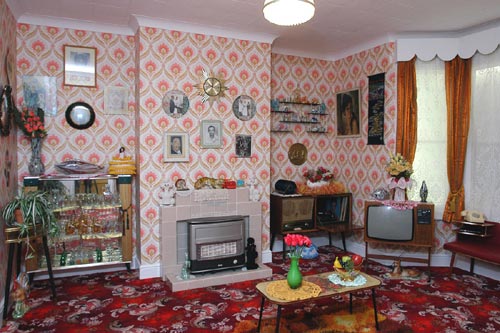 As part of an 'outreach' community-based programme of exhibitions, the Trustees and curatorial staff conceived a Special Exhibition, entitled 'The West Indian Front Room: Memories and Impressions of Black British Homes'. This was assembled by guest curator, Michael McMillan, and opened on 18 October 2005. The exhibition explores the essence of homes 'created by post-war West Indian immigrants who have settled in Britain since the 1950s'. McMillan created an installation that 'represents his vision of the traditional West Indian front room inspired by memories of his own parents and their friends, and how they created in their new world a memory bank of their previous world'. A symbolic neat stack of reinforced cardboard suitcases, called 'grips', would have been brought over by the immigrants, and once the home was established were used to store treasured possessions, on the top of newly acquired wardrobes. Michael McMillan shows how the new inhabitants of the community transformed the simple two floor residences with their own imported cultural effects. He reveals how a proliferation of gold-effect finishes and decoration on ornate frames, glassware and in the trimming and edging of furniture, extended this world to include everything that found a place in the front room. Furniture had to be adorned with special doilies, skilfully crocheted. Highly coloured glass vases contained artificial flowers, 'Petals, leaves and stems could be sculpted with metal coat hangers, covered ... with stretched recycled stockings' and food colourings were usually added to achieve the desired effect. A famous multi-coloured decorative blown-glass fish (a 'blow fish') was often enhanced as a popularly identifiable ornament to take pride of place.

McMillan shows how the arrival of television in the home symbolised a change of use and meaning for the front room, turning it at last into a communal space. A transparent green plastic covering 'could be stuck onto black-and-white television screens, though all the colours were green.' More universally, the front room remained a repository for the 'nice things' gradually built up by each family, as 'museums of archived memories.' As McMillan explains, 'this close-packing of the front room became a metaphor for the closeness of the extended family and community and increasing complexity of their lives'. Children and grandchildren were to become more sceptical of this 'hoarding up'.

The layout of the exhibition round a core of 'The Front Room' reveals the types of heavy furniture initially favoured by the families, but which gave way to a more generalised 1950s aesthetic, perhaps prompted by the trendy design of radiograms and early televisions, and their stands with spindly legs. The authenticity of the surrounding exhibits certainly suggests that the Victoria and Albert Museum could learn something useful from the comprehensive and scholarly manner in which all has been assembled.

Looking forward to 2012, would it be too much to ask that an actual local house be fitted out by the Geffrye Museum and Michael McMillan to capture and endorse the racial harmony that the immigrant families and the existing community have epitomised, and that the Olympics always seeks to emulate? 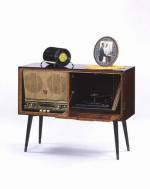