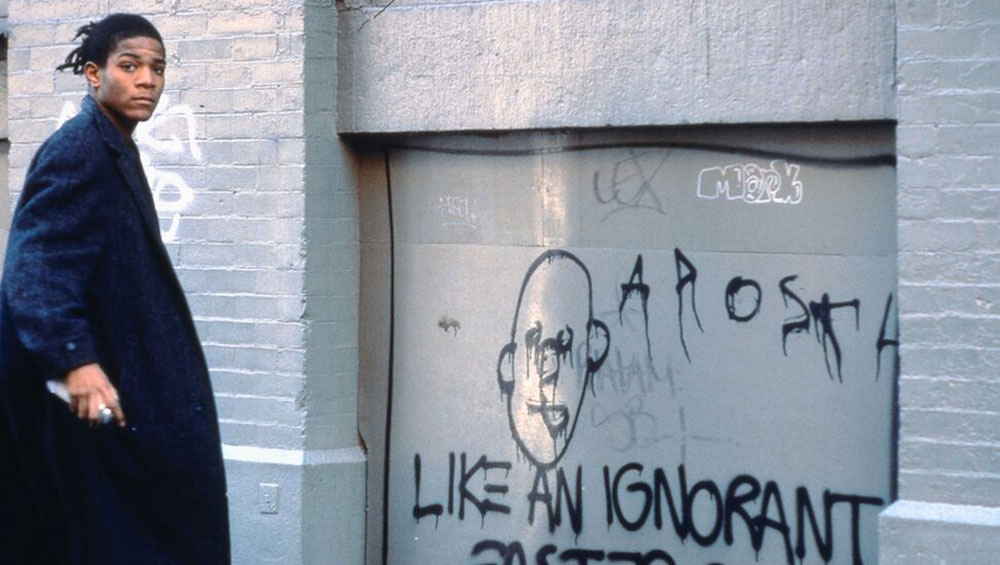 The art of Jean-Michel Basquiat (1960-88) has so often been obscured by the legends. The prosperous middle-class Brooklynite kid turned vagrant teenage dropout turned moneyed beyond his wildest dreams. The street artist who moved from spray-painting on walls to becoming the toast of the New York art world, so cool that he wound up joining forces with Andy Warhol. The Mudd Club partier, hip-hop producer and charismatic celebrity who sold his first painting to Debbie Harry, and for a few months dated the singer who would become Madonna. And finally, the Chatterton of contemporary art, dead at the age of 27 from an accidental heroin overdose six years after his incendiary first solo show at the Gagosian Gallery.

Basquiat: Boom for Real, at the Barbican Centre, London, slices through the mythos and liberates Basquiat’s oeuvre. The first major UK exhibition devoted to the artist, it guides the visitor through his context and presence in mediums such as music, film and television, before presenting reams of his finest work. In doing so, it also redresses some of the problems that have beset his reputation until very recently. 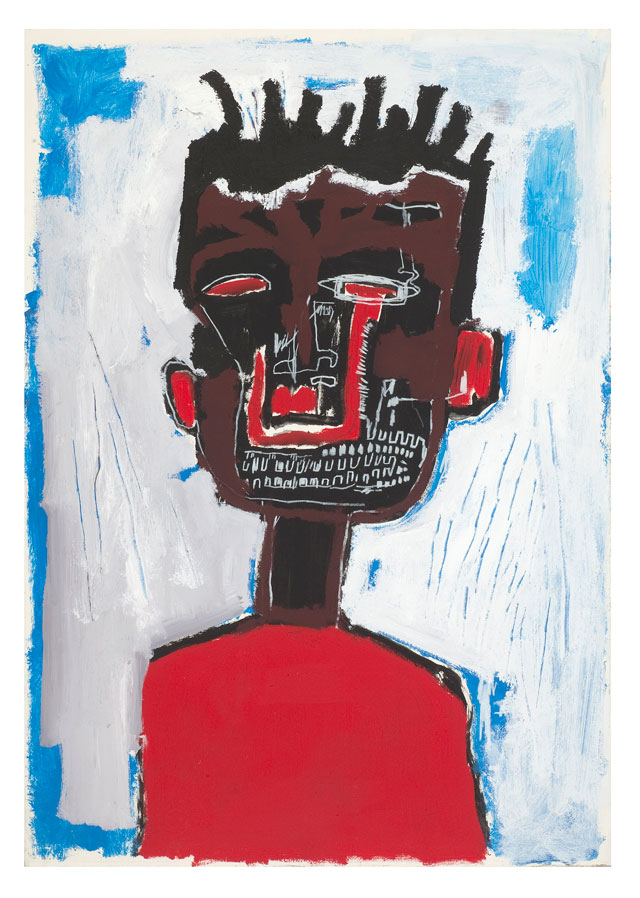 Many of these issues were spurred by racism. When he unveiled his often lukewarm collaborative pieces with Warhol in 1985, the New York Times savaged him as an “art-world mascot” and an “all too willing accessory,” as if he were merely an instrument in the hands of the older, white, artist (in actuality, as Boom for Real shows, the pair shared a genuine artistic affinity, and were mutually beguiled by each other’s work). The exhibition spotlights the encyclopaedic variety of Basquiat’s intellectual interests, in doing so restoring his autonomy and self-determination. He has been wrongly tagged as an artiste naive, his lack of formal education making him somehow lesser or other to trained practitioners. This was reinforced by the initial refusal of museums to purchase his work – soon after his death, the New York Museum of Modern Art rejected a gift from his estate. Neglect from other major institutions saw much of his work fall into private hands, where it largely remains. 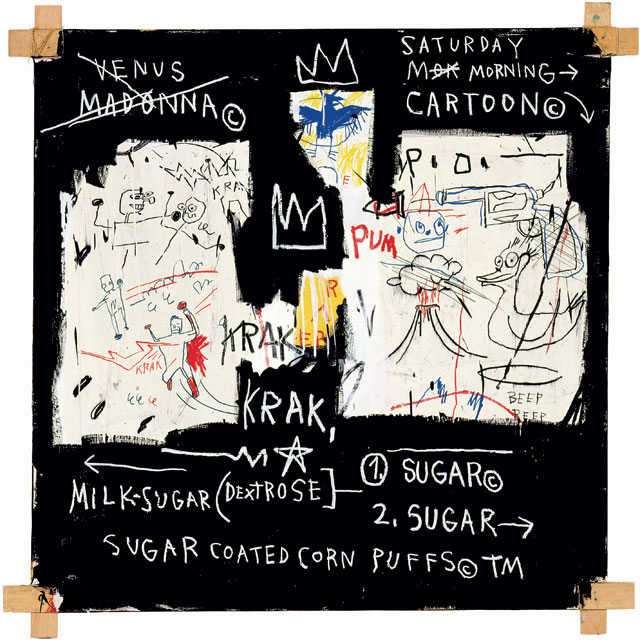 What a delight, then, to see such a compendious variety of it installed at the Barbican, much of it from said collections. Boom for Real begins by reuniting 15 of the untitled 20 works that Basquiat exhibited in the group show New York / New Wave at PS1, where he featured alongside the likes of Warhol, Robert Mapplethorpe, Nan Goldin and Keith Haring. Painted on such unconventional materials as mattress fabric, offset wood and a box from a pharmacy, they make up for their scattershot, unrefined nature with a taste of the shape of things to come: raw visages, scrawled text and an obsession with the organisation of space. The abstracted outlines of city blocks are crammed on to tiny, overstuffed sheets.

New York – the scruffy, wild, dangerous New York familiar from post-punk music and New Hollywood cinema – played a pivotal role in Basquiat’s imagination. His street art with his school classmate Al Diaz under the name SAMO© (a contraction of “same old shit”) took the form of enigmatic messages sprayed on the walls of the now-sanitised Lower East Side, many of which were photographed by the conceptualist Henry Flynt. “A pin drops,” says one, “like a pungent odour.” Another reads “SAMO© as a conglomerate of dormant-genious,” the “ious” likely a reference to Basquiat’s hero, jazz pianist Thelonious Monk. Basquiat and Diaz created something strange and beguiling out of a degraded and often juvenile form, albeit one that has been around since time immemorial. It is clear that, from an early stage, the written word had a great hold on Basquiat’s imagination. 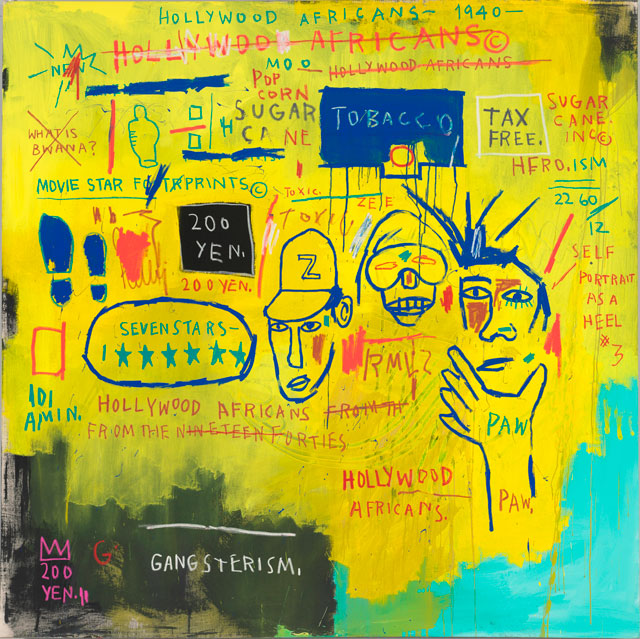 This interest flourished during the work of his most fertile phase, between 1981 and 1983, during his rise to financial success and before his ill-fated collaboration with Warhol and decline into addiction. Works such as Tuxedo (1983) pile references atop references, throwing out connections and ideas with a controlled abandon. That work, which resembles a blackboard, sees Basquiat zoom between Renaissance history, cinema, New York geography and contemporary politics, arranged into the loose shape of the titular jacket. Together, it amounts to an anatomy of the power relationships represented in formal attire, joined together with arrows and interspersed with oblique symbols.

Indeed, some of Basquiat’s most bracing work was political, with particular reference to the racial prejudices and inequality that is still rampant in America today. In the unusually simple Jack Johnson (1982), the first African American world heavyweight boxing champion raises his fist in a gesture of Black Power. The exceptional Hollywood Africans (1983) portrays Basquiat and the musicians Toxic and Rammellzee surrounded by the names of LA attractions and racially loaded language: “sugar cane,” “gangsterism,” “Idi Amin”. Self-Portrait (1981) features two silhouetted heads, one with sinister red lines around the eyes and mouth and the other mawless – the black artist seen as alternatively demoniacal and voiceless. 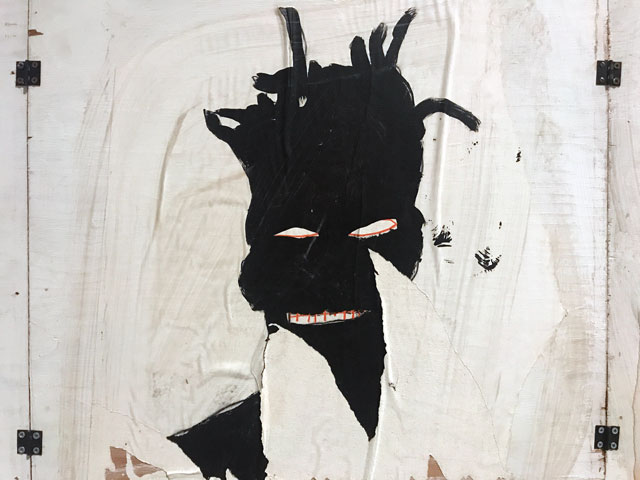 Another Self-Portrait, from 1984, sees the artist’s face crumbling into the bones beneath, digging away the flesh to the anonymous skeleton. Basquiat was hit by a car when he was eight, and suffered a broken arm and ruptured organs. His artistically inclined mother gave him a copy of Gray’s Anatomy, which along with Leonardo da Vinci’s anatomical notebooks proved hugely influential in his drawings of figures. Anatomy and art history collide in Leonardo da Vinci’s Greatest Hits (1982), which counterposes Basquiat’s own drawings of limbs with imitations of the great Renaissance polymath. The sense here is of a virtuoso arranger paying tribute to the past while forging his own present. Such arrangement is perhaps Basquiat’s most consistent accomplishment. He could construct dazzlingly complex mise-en-scène out of disparate elements without ever seeming dry or contrived.

There is much more to enjoy in Boom for Real. One of the largest rooms is focused on Basquiat’s relationship with art history, from a dense, largely textual exploration of a Titian self-portrait to comically glib crib notes on Marcel Duchamp, Jackson Pollock, Robert Rauschenberg and Roy Lichtenstein, scribbled on brown A4 envelopes. A section on jazz features the late work Alto Saxophone (1986), a cartoon-like assemblage of image and text that itself resembles a musical improvisation. And there is a chance to watch the entirety of New York Beat Movie (1981), a full-length feature that sees the artist playing a virtually autobiographical facsimile of himself, strolling in New York looking for scraps on which to paint.

This sense of finally grasping the whole picture grants Boom for Real a rare vitality. It frees Basquiat from his legend and allows the true wealth of his interests and talents to flood out. It would be too much to claim, with the Barbican, that he was “one of the most significant painters of the 20th century”. But, on the evidence of his show, he abundantly deserves notice – and at last one can see why. 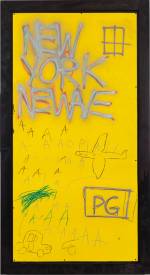 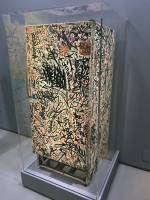