Warhol: A celebration of life ... and death

Warhol: A celebration of life … and death

From February 2007 through to September 2008 there have been over a dozen dedicated Warhol exhibitions/events/publications across the globe, from the Stedelijk Museum, Amsterdam to the Samsung Museum of Art, Seoul, Korea, to Winnipeg and Memphis, USA, and to Queensland, Australia. This has uniquely made possible a major reappraisal of the artist’s remarkable and diverse oeuvre, and his several collaborations with such artists as Keith Haring, Jean-Michel Basquiat and Francesco Clemente.

At this time of the 20th anniversary of his death in 1987, the world has much to be thankful for, chiefly that he survived after 1968, when he almost died after being shot in New York by a female assassin. The ensuing nine years saw Warhol ailing from the numerous bullet wounds he received, but he died finally of postoperative complications following a gall bladder operation. During the final decade of his life, Warhol produced a fresh surge of portraits, and this exhibition includes a fine selection of these, preceded by the portraits he did in the 1960s, for example of Marilyn Monroe, Elizabeth Taylor, Elvis Presley and Jackie Kennedy. These overlapped with his filmic ‘screen tests’, which were a brilliant innovation in art, also well covered in the show. His own self-portraits range from ‘Self-Portrait’ (1978), ‘Self-Portrait with Skull’ (1978) to the ghost-like screen-print self-portrait of 1986. All of these seem to significantly represent an individual anticipating death. It was to come all too fast. By the normal standards of the age, we should this year be celebrating Warhol’s 79th anniversary.

To imagine the grand old man today, his preferences, his enthusiasms and his antipathies, is to review also the tragic condition the world today represents, and the moral collapse of its leaders. Warhol the artist would have a few things to say. But the appalling shooting of Andy Warhol on Monday 3 June 1968 in the Factory by one Valerie Solanas, founder of SCUM (the Society for Cutting Up Men) did for him eventually. It also seriously cut up Mario Amaya, author, journalist and contributor to Studio International.1 Waiting around to interview Warhol, he too was shot, and hospitalised in an adjacent bed to Warhol. There he overheard the doctors saying of Warhol’s condition, ‘It’s hopeless,’ and shouted out from his prone position, ‘That man is a famous artist. He’s got money, lots of money. It isn’t hopeless.’ Warhol survived.

The shadow of death hung over Warhol, from that time onwards for almost two decades. His phlegmatic, ironic, courageous mindset seemed to overcome all setbacks. There remained a steely innocence and a fine intellect behind Warhol’s output. All of this was of course notably recognised in the Museum of Modern Art in New York’s key commemorative 1989 show, and later by Heiner Bastian’s Berlin retrospective of 2001 (which travelled here to Tate Modern and on to the Museum of Contemporary Art in Los Angeles).

Now, as recent saleroom prices for his work indicate, Warhol rests in the stratosphere close to such luminaries of all time as Picasso and Duchamp. There is, not surprisingly, a detectable pathos experienced by the viewer who moves around the capacious gallery rooms of the newly restored Royal Scottish Academy/National Galleries of Scotland. This derives partly from the evident representation by Warhol of the prevalent death and disaster of the 1965–1985 epoch, the sense of an addled, rotting culture (so clearly seen to have fed through into the essentially criminal displacement of traditional Western humanism that characterises contemporary global conflict).

A glimpse of that rationale in Warhol comes in the whole gallery compartment devoted to the large group of some thirty Warhol toy paintings. This series was loaned from Zurich by the Galerie Bruno Bischofberger, which commissioned them in 1983. Warhol hung the small-sized paintings low on fish-motif wallpaper which he had also designed. In the display there is a revealing case set against this wallpaper, full of brightly coloured vintage, wind-up/clockwork toys from Warhol’s own collection together with their marketing boxes. Eduardo Paolozzi, of course, had himself been there before, in the 1960s and 1970s (examples are shown in the National Galleries’ Dean Gallery Paolozzi bequest).

In this exhibition, an adjoining room carries, direct from the Andy Warhol Museum Pittsburgh Founding Collection, his 1964–1966 ‘Silver Clouds’ installation, where suspended inflated ‘clouds’ float at a middle height over the viewer, a buoyant and life-enhancing experience for children and adults alike, compellingly innocent in the projection of an idea. As Warhol said, ‘If you want to know all about Andy Warhol, just look at the surface of my paintings and films and me, and there I am. There’s nothing behind it.’ Such early works as ‘Happy Butterfly Day’ (1955) in ink, graphite and aniline dye, and the much later series of skull paintings (1976) create an indisputable precedent to the contemporary works of Damien Hirst.

The exhibition (and excellent catalogue) reminds us that religion was important to Warhol. He was an inveterate Roman Catholic churchgoer (a conviction that the Warhola family brought from their native Czechoslovakia). Throughout his life, Warhol was impelled in his mindset by the tradition of memento mori. In the ‘Skull’ series of paintings the shadow of the skull paradoxically lightens the painting’s meaning by its profiling of a baby’s head in a combination of ironic, but positive genius. In similar vein, Warhol’s ‘Last Supper’ works (1986), where the original multicoloured Leonardo masterpiece is enshrouded by Warhol in a subtle screening of divinely accumulated camouflage seems indeed to represent an attempt on Warhol’s part to meditate on death, God and the possibilities of afterlife. To quote from the catalogue, ‘The revealed God of the Bible becomes the hidden God of nature’.2 Warhol was clearly anticipating his own demise, possibly even experiencing premonition.

The commentator and critic Henry Geldzahler is credited, in Keith Hartley’s excellent catalogue, with turning Warhol’s ‘no comment’ standpoint, an apparent affirmation at the turn of the 1950s, into an affirmation of the prevalence of death and its denial in 1962.2 The ‘Death and Disaster’ section of Hartley’s exhibition sees Warhol’s ‘no comment’ stance sustained beyond. The 1960s portraits of celebrities, through Elvis Presley, Eiizabeth Taylor (thought to be close to death at the time), to the widowed Jackie Kennedy stand without qualification, and they overlap with the filmic ‘Screen Tests’ which form such an important part of Warhol’s output of the 1960s. Warhol had taken up an old Hollywood formula, the three-minute filming of an actor’s face/figure. The whole concept of ‘time span’ and comparability, one with another, supplied Warhol here with a valuable template. The multiplication of the still-painted portraits fed into this idea. The later portraits, such as of Truman Capote, Dennis Hopper (1971), Judy Garland (1979), Liza Minelli (1979) and Joseph Beuys (1980) are of individuals threatened in their lives to a greater or lesser degree: as was Warhol himself, all in memento mori.

Two symbols which have haunted Western society are represented by ‘Dollar Sign’ (1982) and the ‘Cross’ (1983). They mark the start of the closing years of Warhol’s epic life, typically without comment by himself on either portent. Let us not forget that Warhol’s contribution to the New York World Fair (1964) was ‘Thirteen Wanted Men’, in a tableau portraying such power figures as Governor Nelson Rockefeller and architect Philip Johnson: the individuals concerned were embarrassed and could not stand it. Warhol was forced to cover up the images. In a cheerful default, he did so without remorse, but with irony, in his typical silver paint.

This is an outstanding exhibition, which by an economic selection of key material allows the public a deeper insight into Warhol’s brooding but seemingly flippant character. Susan Sontag understood early on the degree to which Warhol was ‘Pop’ by her definition, rather than simply, as many assumed, ‘camp’.3 In Notes on Camp she defined that difference: ‘One may compare Camp, with much of Pop Art, which – when it is not just camp – embodies an attitude that is related but still very different. Pop Art is more flat and more dry, more serious, more detached, ultimately nihilistic. Warhol’s work readily fulfilled this, as he embraced the cool.’ So the early consumer product pantings such as the Brillo stacks, the Campbell’s Tomato Juice Box, the Coke Bottles (1967) remain a challenging comment on the exploding and pervasive consumer culture which embraces us all. Warhol saw all these as also representing the art of life, for better or worse, and not simply to be denigrated as ‘product’.

Footnotes
1. Mario Amaya was himself courageous in all respects and died likewise prematurely, in Charing Cross Hospital London in the late 1980s: a sad loss for Studio International and the art community he served.
2. Hartley K. Andy Warhol: A Celebration of Life … and Death. Edinburgh, National Galleries of Scotland, 2007.
3. Sontag S. Notes on Camp. Partisan Review 1964. 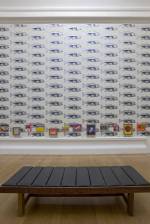