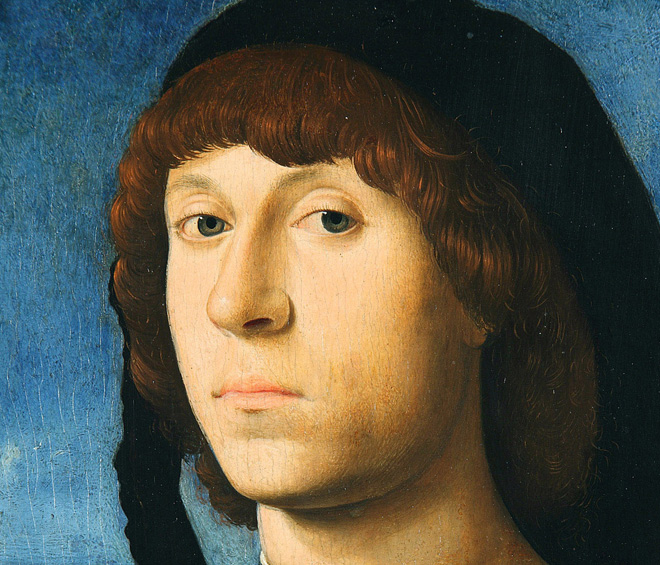 There are numerous Annunciations and innumerable Madonnas in the annals of western art, but none quite like Antonello da Messina’s late Virgin Annunciate(1475-6), usually housed in Palermo’s Palazzo Abatellis. Rendered with a verisimilitude as astonishing now as it must have been when first painted, Antonello’s Mary has a presence seldom matched in the five and a half centuries since. The Virgin sits before her prayer book, in a darkened space that emanates a blessed quietude. She is beatific, but not idealised; a living, breathing human. While her left hand adjusts her shawl, her right hand appears to reach outside the painting, a technique that seems less tricksy than hauntingly alive.

Renaissance artists conventionally represented the annunciation – the Madonna’s fateful encounter with the Archangel Gabriel – by showing the communication between these two actors. Antonello, however, turns his perspective on Mary alone. Her divine visitor is instead represented in the celestial light that bathes her face and veil, bestowing both with an extraordinary luminosity. Mary’s eyes gaze inwardly, as if she is taking a moment to process the angel’s surprising message. The Virgin Annunciate was probably painted as an aid to private devotion. Antonello’s Mary – humble, contemplative, self-possessed – was created to serve as an exemplary model for her beholder’s own piety. Yet standing before its immaculate interplay of light and colour, artificial perspective and lifelike immediacy, you might be forgiven for kneeling instead to its artist’s miraculous abilities.

The Virgin Annunciate is currently installed at Milan’s Palazzo Reale, for an exhibition of Antonello’s works. It must be an early candidate for the year’s most rapturous. Nineteen paintings have been gathered, almost two-thirds of Antonello’s surviving output. Staged in a suite of chambers that seldom contains more than a pair of works, it encourages visitors to approach each work deliberately and intently, presenting each as a sacred treasure to be prized, one by one. 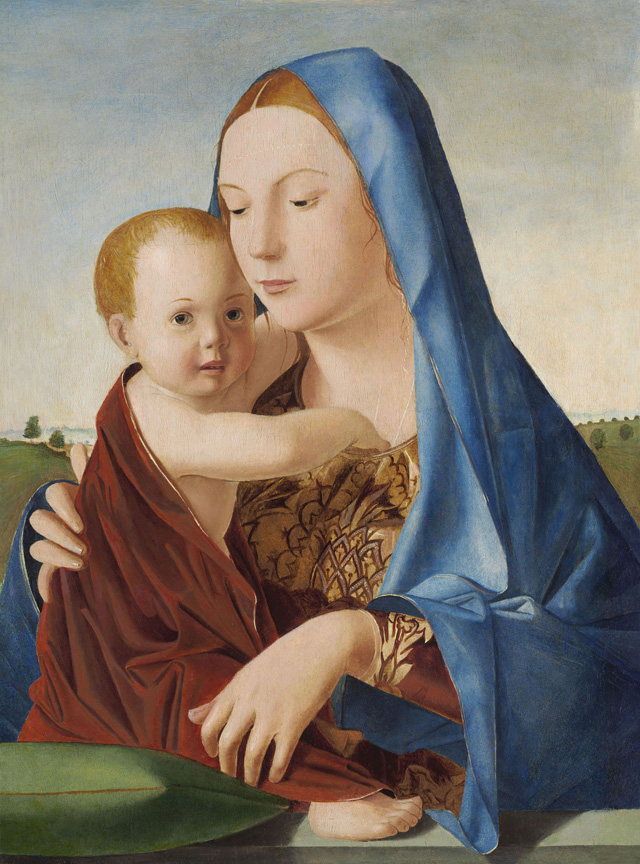 Antonello played a curious role in the Italian Renaissance. Born between 1425 and 1430 and resident for most of his life in his native Messina, he was to some extent an artist on the periphery, far away from the peninsula’s artistic hotbeds. And yet he was also a crucial figure in the transition between what art historians used to refer to as the “early” and “high” Renaissance, synthesising Italian ideas with those from the Burgundian Netherlands and Provenceto arrive at a bold, direct, emotionally resonant idiom.

In Antonello’s earlier work, we can see these different layers begin to intersect. Take the Sibiu Crucifixion (c1466), a work in tempera, the intricate composition of which belies its minuscule size. In the upper part of the panel, Christ and the thieves are crucified in the sort of symmetrical arrangement favoured by Italian contemporaries such as Fra Angelico. The lower section, on the other hand, presents an irregular, dynamic set of mourners more redolent of Jan van Eyck; the landscape behind, although ostensibly depicting Messina and the Aeolian islands, has the recognisable curves of Flemish art. 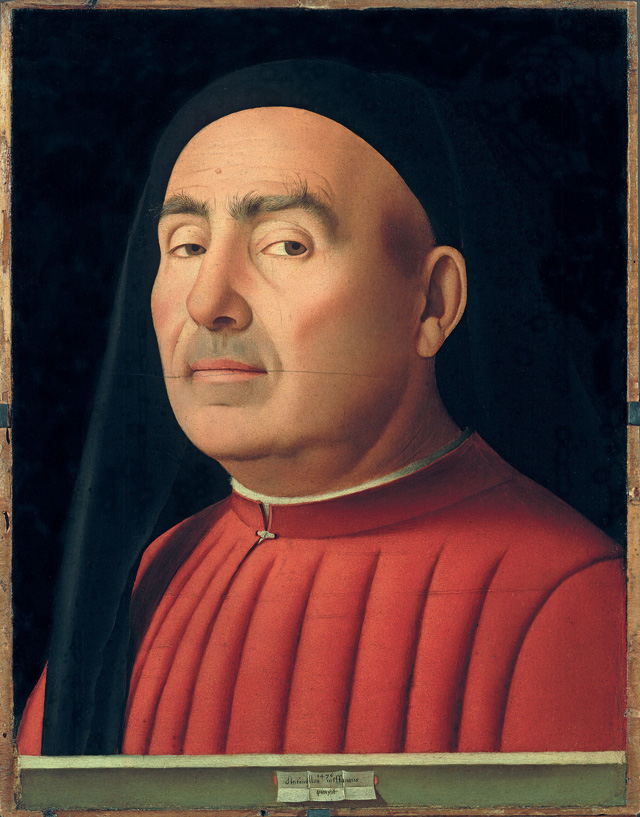 Although Antonello was familiar with the mainland – he trained in Naples, almost certainly spent time in Milan and, for around a year towards the end of his life, plied his trade in Venice – his Sicilian origins set him apart from the other major protagonists of the period. They also perhaps contributed to his transformation, soon after his death in 1479, into a semi-legendary figure. In his Lives, Vasari depicted him as a Promethean hero who single-handedly introduced oil paint to Italy, after wilily coaxing the secret out of the Flemish artist-cum-alchemist Van Eyck. A century later, the Venetian biographer Carlo Ridolfi had Giovanni Bellini disguising himself as an aristocratic patron and asking Antonello to give him a demonstration, leading the overeager Sicilian to unwittingly reveal his hand. As Antonello became known through these stories, his oeuvre became more elusive; for a time, the Virgin Annunciate was thought to be the work of Albrecht Dürer. It took until the Risorgimento-era art historian Giovanni Battista Cavalcaselle, as charted in the Milan exhibition, for a plausible account of Antonello’s life and works to be formulated.

Modern scholarship has taken away Antonello’s role as oil-bringer, while admitting him among the first in Italy to master the expressive qualities of the new medium. Previously, Italian painters had tended to use tempera, the quick-drying mixture of pigments and egg yolk. The slower-drying oil hugely increased artists’ ability to blend, allowing for richer hues and subtler layering of colour, and, with them, a keener naturalism. Antonello made full use of these techniques, often to dazzling effect. Take his 1475 Ecce Homo, from the Collegio Alberoni in Piacenza: using a minute gradation of tones to realistically render Jesus’s skin, Antonello presents Christ as a flesh-and-blood man, his lips curved in an expression of unutterable sorrow. 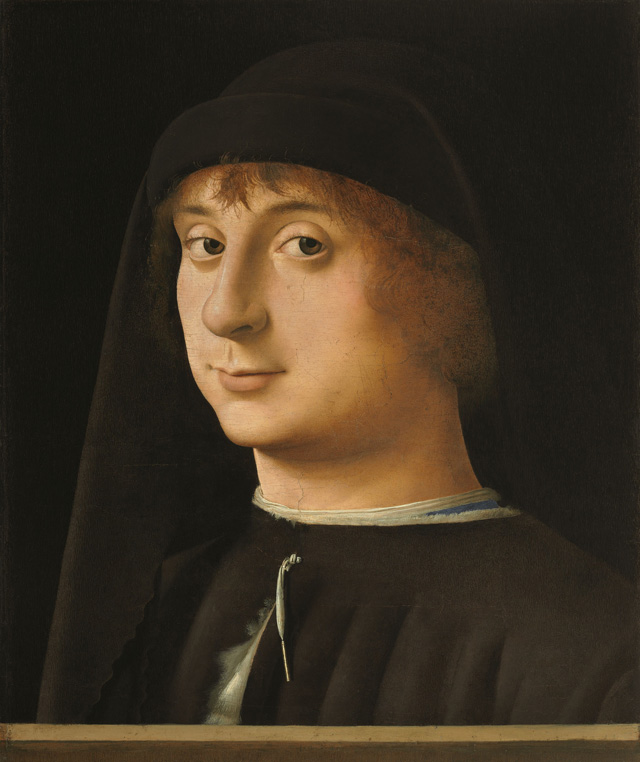 The same worldliness can be found in Antonello’s exquisite male portraits of the 1470s, five of which feature in Milan. All show their sitters in a three-quarter profile, in four instances against a plain black background. This style – which, as with his oil technique, Antonello probably learned from studying Netherlandish painting – stands in marked contrast to the medallion-like profile portraits previously favoured in Italian art from Pisanello to Piero della Francesca. By revealing the full contours of the face, Antonello is able to render his subject’s physiognomy more accurately while summoning up psychological insight.

Alhough they share a similar mise en scène, each of these portraits is distinctive and individual. Now housed in Cefalù in Sicily, a 1470 depiction of a young man, once thought to show an unknown mariner, has a snarky, sardonic smile that seems to sneer with condescension. Another young man, from 1474, in Milan from Philadelphia, is warm yet reserved, and not a little ironical, with a youthful complexion masking an encroaching plumpness. In a display of oil’s potential, Antonello carefully delineates numerous shades of black: in the sitter’s pupils, hat and robe and in the background. Even when deploying the most astringent palette, Antonello manipulates line, colour and light for maximum effect. 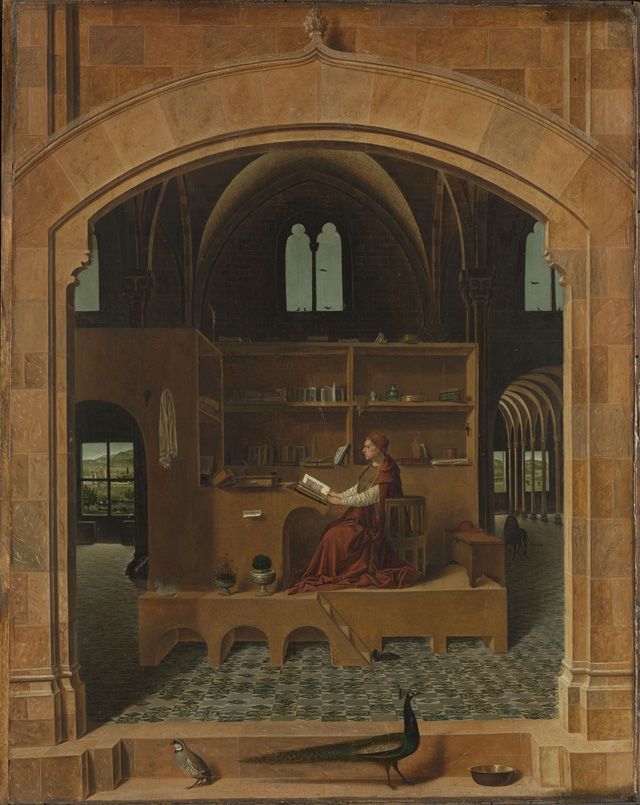 Perhaps the most elaborate demonstration of these skills can be seen in his rendition of Saint Jerome in His Study (c1475), from the collection of London’s National Gallery, where it was long held to be the work of an unknown Dutch master. Although half a metre in height, it sees Antonello create a world in miniature, and one that bridges gothic features with the realism of the Renaissance, and the perspectival ingeniousness of Italian art with the north’s interest in architecture and still-life. It is a bravura demonstration of Antonello’s capability to use light to shape space and pinpoint the most minute detail.

Antonello’s Jerome is not the familiar wizened old hermit, but rather a severe, middle-aged man, immersed in reading; his right hand is ready to turn to the next page. He sits within a dais-like structure, itself divided by numerous cluttered shelves, the chaotic debris of a determined scholar. This study is housed within a vast gothic hall with an elegantly tiled floor; his lion prowls within a pillared loggia to the right. In the background, pane-less windows open out on to a verdant landscape and an azure sky filled with swallows. Antonello frames the image with an arched portal, on the threshold of which stand a partridge, a peacock and a water bowl. Through careful interplay of light and shadow, Antonello individualises all these elements, while subordinating them to the reading saint. It is time for study, the painting seems to say, and the distractions of the world can wait. Antonello’s works demand and deserve the same intent – and with this exhibition, the Palazzo Reale has provided an ideal shrine in which to afford them that. 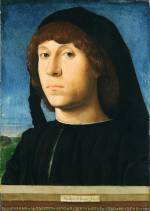 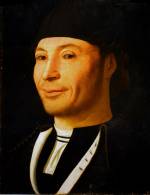 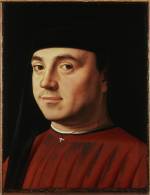