‘The Print in Italy 1550–1620’ at the British Museum (27 September 2001–6 January 2002) is an exceptional exhibition of over 150 works from the museum’s own collection as well as a number of important loans. It is the first exhibition to present a broad and representative survey of the printmaking of this period. 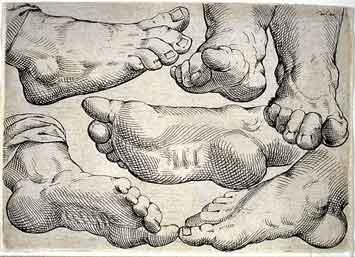 The exhibition is divided into three sections. The actual processes of printmaking are examined from the manner in which designs were conceived and transferred onto the prepared plates and then printed and packaged for sale. In the second part of the exhibition the group of individuals involved: designers, engravers, printers and print dealers are presented. The third section focuses on the cities of importance for printmaking: Rome and Venice; Bologna and Siena.

The scale of prints in the exhibition is of significant note since the period 1550–1620 saw the development of large-scale commercial prints. This scale of production is also evident in the marvellous range of skills and subject matter portrayed.

The scholarly presentation of this exhibition and the superb catalogue are exceptional, and enable one to study the period in depth.

Michael Bury’s catalogue clarifies certain problematic concepts in the literature on printmaking. One is that of the ‘reproductive’ print:

Bury distinguishes between the manner in which certain engravers’ or printmakers’ value lay exclusively in the accuracy of the rendition compared to an existing artist’s work, and an artist like Cornelis Cort who worked in close collaboration with the artists (for example, Titian) whose work he was ‘reproducing’.

Printmaking enjoyed an increased appreciation in the second half of the 16th century; Vasari’s 1568 edition of his Lives of the Artists introduced a discussion of prints and printmakers where he established a framework for them to be discussed. The collection of prints also became a phenomenon. As the exhibition displays, the range of subject matter was wide-ranging: mythological and devotional images, maps, allegorie, erotica, records of antiquities, and ‘low-life’ depictions of street brawls and the tradesmen and artisans. ‘The Roast Chestnut Seller’ by Francesco Villamena (c. 1565–1624) belongs to this tradition that takes as its subject street sellers and carnival characters. Here, Villamena portrays his character, not in a particularly humane manner but as a grotesque individual; in the verse below the figure it states that the ‘Chestnut Seller’s’ voice is so loud that it would make hell shake. It is intended to be humorous. Prints were often sold at fairs, collected in albums, framed on walls in houses. In short, they became a visual currency with a wide audience. Writers and collectors showed unprecedented interest in the variety and creative enterprise.

Bury documents the roles and relationships of the individuals involved in the production of these prints – designers, publishers, artist/printmakers – and how the various circumstances determined how the production of works at different points came into existence. The term publisher is clarified by Bury not as in the modern usage:

The co-operative nature of print production, in this and subsequent periods, lends itself to providing an insight into the structure of society and broader issues involved in art production. So too does it illuminate issues of working methods – the introduction of the important position of technical assistant – both of a single artist/printmaker and a print workshop. It reveals the technical proficiency and the ability to solve visual problems, for example, the fact that an engraved or etched image is by its nature a mirror image. In many images the mirror image was acceptable – even preferred – in others such as Cort’s ‘Marriage at Cana’ (c. 1533–78) it was necessary for the image to be the right way round, since in any images of Christ making a blessing the gesture could not be performed with his left hand. There existed a number of technically demanding methods for reversing the image. A technical assistant was used to achieve mastery in ambitious or difficult works. ‘The Practice of the Visual Arts’ by Jan van de Straet, called Stradanus (1523–1605) is a drawing that was clearly the design for an engraving that was subsequently produced by Cornelis Cort, also in the exhibition. The drawing is virtually the identical in size to the engraving, and all the figures are using their left hands, so displaying the artist’s intention to transfer the image onto an engraving plate.

Stradanus was particularly interested in making designs specifically for an engraver to adapt. He seemed to work successfully with Cort who appeared to have been able to make certain alterations of his own. Cort is a particularly good example of a printmaker who could transfer the work of an artist into a graphic medium which paid tribute to the original while imbuing the print medium with a certain life of its own.

Cort’s ‘Crucifixion’ involved the designer Guilio Clovio (1498–1578) at a further stage; that of the illuminator of the print once his original image had been engraved and printed by Cort. It was printed on a blue-grey silk and mounted on paper. Once coloured by Clovio, ‘the engraving was transformed into an exquisite ‘unicum’.7

The period covered by this exhibition (1550–1620) saw a number of outstanding printmakers working in Italy: Carracci, Federico Barocci, Cornelis Cort, Aegidius Sadeler and Francesco Villamena. With the arrival from the Low Countries of Cort and Sadeler, for example, Italy became a lively and international centre for printmaking. The range and quality of work was extraordinary. Michael Bury’s catalogue The Print in Italy 1550–1620 is the only survey of this period in any language, and draws upon a remarkable range of hitherto unpublished and unexplored material. This is a splendid exhibition and a fine, scholarly study and presentation of detailed and fascinating material; both visual and documentary. 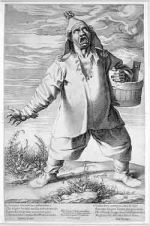 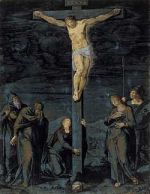 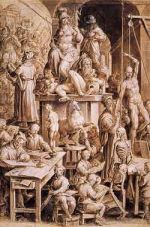