No Tension In Machines

No tension in machines

Clacking, ticking and now and then breaking down, an exhibition at New York University's Art Gallery brought New York the first full-scale experience of the machine-art being produced by two groups and various individuals in Italy.

Appropriately sponsored by the Olivetti Company, the show of works, by Group T of Milan, Group N of Padua, and independents Bruno Munari and Enzo Mari, is a serious presentation of the efforts of mainly young artists to elicit beauty by mechanical means.

Perhaps it is a paradox, but despite their hard-headed indifference to sentimentalism and symbolism, as associated with the history of painting and sculpture, these young artists are by far the most diligent esthetes of the epoch. Building complicated motors, often based on advanced scientific principles, they seek to produce nothing more nor less than sheer esthetic satisfaction.

They do succeed, but at a very low intensity level. The fact is that each machine, even if 'programmed' so that it does not repeat exactly the same image twice, creates an experience so limited and relatively monotonous that the viewer soon passes on, after having been lulled to the point of indifference by the movements.

It is not possible to describe the individual works. Some are simply screens across which lighted patterns slowly pass. Some are composed of various elements which, as they move into acceleration, produce new patterns. Some have certain humour, such as a case of magnets and iron filings that move in a slow-motion, unpredictable fashion, or a mattress of plastic bars that 'breathe' in and out (like player-piano keys only smoother).

Watching is pleasant, but somehow not gripping. And perhaps the reason for this lies in the realm of physiology. Probably the most appropriate argument against arte programmata as it is called in Italy can be taken from cybernetics, the mother field. According to W. Grey Walter, certain predictions drawn from the cybernetic model have now been confirmed by brain physiologists who have established that the brain response to a single event is a measure of its novelty or innovation rather than of its physical intensity.

Now, Bruno Munari tells us that as times change, man's sensibilities change with them. A static image, he writes, unique and final, does not 'contain that quantity of information sufficient to interest the contemporary viewer who is accustomed to life in an environment subject to simultaneous and multifarious stimuli from the most varied sources.'

But by the very terms of 'information' conveyance given by Dr. Walter, the human brain still does not assimilate multifarious stimuli multifariously, but selectively. Redundancy, such as is inevitable with a machine that no matter how complicated, can only repeat certain basic movements, automatically cancels out the repeated stimuli. What is left are the minimal innovations possible in a programmed situation.

When Munari concludes that a work of programmed art is to be considered not as an object representing something else, but as 'the thing' in itself to be observed and calls this 'a fragment of a new reality' he is entirely justified. It is just its fragmentary character which lessens its intensity. What he considers the static image—the orthodox painting or sculpture—is less static than the kinetic images, for the brain is alerted, inch by inch, by the constant variation the artist brings into play.

Then too, the purely esthetic effects sought by these young artists are homogeneous, too purely esthetic. The lure of the painting or sculpture generally lies in the realm of its tensions. When the machine works smoothly, whether it is an oil-derrick or an art machine, tension is eliminated and with it the involvement of the spectator. These machines are to be watched, and can be watched with pleasure. But there is little residue left in the imagination. At best, the patterns they create will serve to enliven the commercial arts, and to stimulate and prod the fine arts, but I cannot see them enjoying a long life-span.

While the Venice Biennale is entertaining and infuriating the world at large, New York is having its own Biennale-in-little at the newly opened Washington Square Art Galleries. Billed as the largest gallery in New York— it occupies five large floors in a downtown loft building— this corporation has undertaken to present nothing less than a world art show.

It's a show all right, but is it art? Of the numerous paintings and sculptures hailing from points as distant as Formosa and Java, few could qualify as works of art of any distinction. And of the few that do qualify, the wearied viewer, satiated with banalities, can derive little.

The problem with a monstrous mish-mash like this is not so much the abundance of work on view as the indifference with which it is presented. Labels are inaccurate and hastily pasted on the walls; frames are omitted even if the picture obviously was intended for a frame ; surfaces are dusty and sometimes actually marred, and lighting is poor. It didn't seem to matter whether the work was the best by the particular artist as long as his country was represented so that the boast of the world show could be made good.

Quite aside from the ignorance and indifference displayed by the promoters of this gallery, and aside from the questionability of massive exhibitions, there is the subtle problem of environment. Is it possible, under such conditions, to 'see' a work of art? I think not. Although this exhibition included a number of works by serious artists— and good works— they suffered from the tawdry environs. Anthony Caro, Helen Frankenthaler, Richard Stankiewicz, Kenneth Noland, Willem de Kooning, Eduardo Paolozzi, Robert Goodnough, Jorge de la Vega— these serious and compelling artists in a wilderness of unseriousness and banality are inevitably rendered ineffectual.

On a different level, an international experiment in its fourth year at Fairleigh Dickenson College in New Jersey, flourishes. Founded by Tosun Bayrak, a Turkish painter permanently settled in the United States, the international seminar brings together artists of widely varying origins and backgrounds in an informal situation. They are given studios, materials, room and board and all the free time they need for a six-week period. All that is expected from these painters and sculptors are paintings and sculptures.

But en route a great deal more happens. Scarcely an artist has appeared at the seminar who doesn't admit that his concourse with other artists in such close proximity has altered his work. More especially, the Europeans visiting the United States for the first time have been excited and stimulated by discussions and visits to New York City. Out of exchanges in a variety of languages, both plastic and linguistic, these artists feel their personal horizons have been extended. An exhibition of their works, which vary from the exacerbated expressionism of Argentina's Felipe Noe, to the restrained abstractions of Czechoslovakian Jiri Balcar to the calligraphic fantasy of Bayrak himself, is a more stimulating tour de monde than the hundreds of works at the Washington Square Galleries.

While I'm on the subject of internationalism, I would like to signal a most touching exhibition of photographs on view at the United Nations. Called 'Art and Man', it is the first UNESCO cultural exhibition ever held at United Nations Headquarters. This in itself is a shocking fact, undoubtedly accounted for by lack of funds.

The exhibition comprises photographs of various phases of the arts— both the creative and receptive aspects— as submitted by some sixty nations. Since the show was based on invitations, there is a certain imbalance (a lot more American photographs, for instance, than there ought to be proportionally) but this is not a serious defect.

Out of the excellent photographs which range from children playing instruments and painting to adults listening to music or contemplating pictures in museums, the viewer can derive great satisfaction, and confirmation of the truism that creative activity is truly international and basic to human existence.

One of the least publicized but most rewarding exhibitions in New York is Asia House's 'The Art of Nepal'. In presenting more than a hundred examples of Nepali art, selected and documented by Dr. Stella Kramrisch, Curator of Indian Art at the Philadelphia Museum, Asia House performs a signal service. Not only is the Nepali art splendid and distinctive, but Dr. Kramrisch's illustrated catalogue— the first extensive account of the art of Nepal ever published— offers laymen and scholars alike an opportunity to penetrate the inaccessible Kingdom of Nepal through its myths, legends and artistic emblems.

The works on view range from the 5th to the early 19th centuries, fanning out in many directions. One of the most compelling is a copper-gilt Bodhisattva sent directly from the Golden Monastery in Nepal and still bearing traces of the vermillion powder sprinkled by the monks to wish it a good journey.

Another exceptionally beautiful and sophisticated sculpture is a late 14th century figure of Tara, the 'saviouress', a consort of Buddha with whom he is united. 'In relation to her, within the state of Buddhahood, he is the means and she is the end.'

One aspect of Nepali art which comes through emphatically is the insistent reference to Tantric Buddhist imagery. Tantric Buddhism was strong in north-east India and Tibet, according to Dr. Kramrisch, and was the source of much of the vigorous art of Nepal from the 15th to the 18th centuries. Tantric Buddhism is an essentially activist creed, holding that the realization of the Ultimate can be made in this life. Accordingly, many Tantric deities are depicted as fierce or ecstatic and there is a pronounced erotic character to their forms. The earthiness of Tantric tenets is seen in sculptures in which male and female deities are depicted in physical union. Nepali sculptors excelled in the depiction of various dancing deities and they brought to their task an expressionistic verve that is a direct translation of the Tantric celebration of love and human emotion.

Asia House, a quiet and dignified institution which specializes in temporary exhibitions, deserves gratitude and warm praise for the suite of important, often unique exhibitions it has brought us in the past few years. 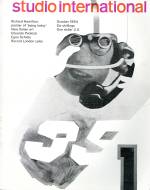 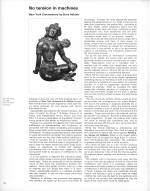 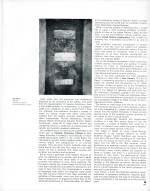