Anselm Kiefer weaves myth and the modern era into a characteristically apocalyptic show. But is it all doom and gloom? 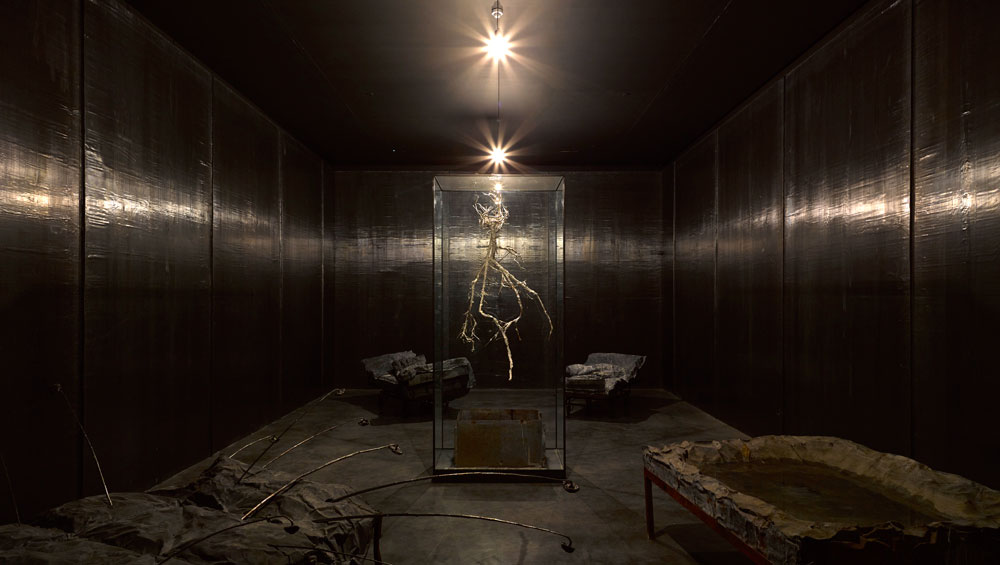 The White Cube in Bermondsey, south London, has been transformed. The doors of the exhibition space have been narrowed and bare light bulbs hang from the ceiling. You enter a dingy corridor filled with rusty hospital beds, resembling an abandoned ward in Chernobyl. The walls are lined with lead and the bedding, too, is hammered from sheets of lead, as though, after some cataclysmic disaster, people have tried to shield themselves from the fallout. But now this eerie hallway is abandoned, with just names, such as “Bründhilde”, hanging from the bed frames on wooden tablets, like unintentional memorials to the deceased. This is Anselm Kiefer’s Walhalla.

The name might conjure glory, but there are no gilded interiors here. The exhibition’s namesake, which is located near Donaustauf in Germany, is a monument to notable writers, scientists and politicians, a sort of German Pantheon filled with gleaming marble busts. Despite its classical facade, this hall of fame was inspired by Old Norse mythology, where Vikings who had met a brave end in battle could fight, eat and drink mead for eternity. Wagner, too, is undeniably present in Kiefer’s retelling of this myth, and the resultant melodrama is peppered with the names of artists who have had an influence on his life – Hans Holbein, Albrecht Dürer, Peter Paul Rubens. Undoubtedly, this is an exhibition about death, but as perverse as this reading may seem, there might just be hope lurking behind the pervading doom.

Kiefer was born in 1945 and grew up playing in the rubble of postwar Germany, a childhood that has had a huge effect on his life and art. “When I have a ruin in front of me,” he said at a recent talk at the Royal Institute of British Architects, “it is for me the beginning.” It seems for Kiefer there are only beginnings. Everything is cyclical, and decay is just the start of something new and exciting. His paintings, great testaments to the apocalyptic demise of the imagined world he has created for himself, are forever changing, oxidising, peeling. It’s a nightmare for collectors, he says, who have banned him from coming close to his “finished” works because he can’t resist altering them further. Kiefer delights in it: “I think it is necessary that things change.” His famously enormous studio complex in Barjac, France, is full of underground tunnels, warehouses and crumbling towers, which he has built, it seems, so that he can revel in their collapse.

The teetering towers of Barjac feature heavily in his paintings, haemorrhaging great plumes of metallic blue smoke. Like the Tower of Babel, they speak of humanity’s destructive ambition, and like the myth itself, relics of a lost or imagined civilisation. In another room, a spiral staircase is adorned with the muddied clothes of women and children. These symbolise the mythological Valkyries, the women who chose who would live and who would die in battle and therefore enter the hall of Valhalla. But these rags do not reflect the glorious armoured figures of the sagas; rather, they seem to be victims of an unspeakable holocaust. There is no glory in death here.

Kiefer has long explored themes of destruction and decay, and with the current rise of the right in the western world, the seemingly ceaseless bombardment of Aleppo and a renewed fear of nuclear armament, his work seems as pertinent as ever. Is Kiefer a political artist? “If someone wants to take me as a political artist, why not?” he says in his usual relaxed manner. He is a much more cheerful man than you might expect, full of energy and quick to laugh. He is, after all, an artist and not a prophet, despite the timely nature of this exhibition. But maybe we can draw hope from Kiefer’s love of ruins. From the rubble, cities grow anew. Eventually the walls that divide us tumble. These, too, are part of Germany’s history. Kiefer reminds us that what can seem like the end is actually a beginning, but the future depends on what we choose to do with the fragments left to us.