Moving Beyond – Painting in China 2013

Moving Beyond – Painting in China 2013

In the early 1930s, the poet and editor Ezra Pound coined the phrase that would become the maxim of Modernism: “Make it new.” In actuality, Pound had appropriated it from an archaic Chinese source; a bathtub inscription of a Shang dynasty emperor. Whatever Modernism was, it wasn’t strictly modern. The idea of history as an ever-upward process is largely a western delusion.

Of the many aspects that the exceptional Moving Beyond – Painting in China 2013 exhibition explores, one of the most pertinent is that the past and our relationship to it are much more fluid than we usually think. Being partially a fiction we adapt in the present, the past changes. It also, in its half-forgotten innovations and side-roads, contains the future. As William Faulkner wrote, and these paintings reiterate: “The past is never dead. It's not even past.”

The spectre haunting this exhibition is that of Chairman Mao. This diverse selection of artwork was created in his long, lingering shadow. Yet they were made not simply in defiance of state censorship and the prescribed tradition of Socialist Realist art, but with much more oblique and astute methods and purposes. The relationships of Chinese artists to “the Great Helmsman” are complex as one of Moving Beyond’s curators, the poet Yang Lian, acknowledges: “This so-called Cultural Revolution has not disappeared. Among Chinese artists, at least, it has become ever deeper. The difference is that this shadow was once clearly identified as a catastrophe, a disaster, whereas now it has become a seduction that alluringly fills the air.” The title of the exhibition suggests a breaking-away, a move they achieve by recognising, as Pound did, that the new lies in the very old. It is partly, then, a cartography of rediscovered territory and an exorcism.

The art of Liang Quan is a fine example of how subversion does not have to look like, or end with, subversion. His ink paintings initially seem tranquil, reflecting his following of Zen Buddhism and that point where, through meditation, being dissolves into nothingness. They evoke silence, contemplation and classical Chinese art; therein lays their divergent strength, both against the tide of Mao’s China and the China of today. By resurrecting styles used in pre-Communist crafts, Liang crossed the Maoist censors. Equally now in a materialist age, his work goes sublimely against the grain. They are inaction paintings, in the best possible sense. In a prevailing climate of electronic sound and fury, the quiet, the insular, even the empty have become increasingly intriguing places of escape and disruption. Shunning direct political engagement, there is nevertheless a dissonance in the quietude of Liang’s painting, a poetic slowing of time in an age when things are forcibly speeding up, a focus of attention on to those barely coloured, layered strips of paper until the slightest dash of green or peach seems both jolting and harmonious within the painting as a whole.

Liang’s collages might seem abstract, but only in so much as landscape can be. They recall Cézanne who chanced on proto-Cubism while painting the hills and fields of Provence. They also remind us that multiple perspectives existed in traditional Chinese art centuries before Braque and Picasso. Against the bustling metropolis, Liang paints serene landscapes “idly” contemplated. Against consumerism, he places spirituality; against blaring spectacle and garish kitsch, he pitches epics of the trivial (My Peach Garden, Little Tea House). His are subversions that are easily missed. It could be that they represent nothing – that much sought-after Zen state – or it could be that they ask us to simply look closer and look slower.

Though also primarily landscape-based, the paintings of He Gong contrast dramatically with those of Liang. In churning oils and acrylics, he depicts scenes that are indefinable but enthralling. His paintings capture tableaux of celestial rapture or squirming entomology. All is unclear. Teeming figures that might be of human or petrified form appear huddled together or swarm around maelstroms and supernova. Light radiates and ripples outwards. It could be the Last Judgement, an atomic bomb blast or luminescence in a rock-pool. Similarly, the writhing masses involved might be rocky crags, exploiting the innate human sense of pareidolia. Demonstrating that art is a dialogue disguised as a monologue, perspectives shift enabled by He Gong’s often stunning use of paint. One Day All of Us Eat Cordyceps (2013) might be a nocturnal crowd scene or submarine coral. In the molten, politically charged Out of Tibet (2012), a couple embrace or consume one another. It is possible to see echoes of the swirling angels of Gustave Doré’s Paradiso illustrations in Mainstream Dirty Oil (2013) or Anselm Kiefer’s Das Wölund-Lied (Wayland's Song, 1982) in Dance of Zeus (2011). They are almost Romantic, just as the spattered Agitation (2012) and Arson (2010), with their barest hints of Jean-Michel Basquiat, are almost Neo-Expressionist. Yet He Gong evades pigeonholing. His work is remarkable for its multiplicity; previous projects involving Tibetan buffalo dung, the motorcycle route of Che Guevara and scathing self-portraits. Told by Mao and his descendants that they must serve “the people” (or equally that they must serve political dissidence), artists such as He Gong have proved otherwise. If art exists, it is a defiance of any involuntary obligation.

Liu Guofu shares He Gong’s senses of the transcendence and the enigma of landscape as well as having Anselm Kiefer as a forebear. Liu spent years in remote wilderness areas of China and Turkistan, and his Open Space paintings of storm-tossed and blizzard-shrouded forests contain not only incredible splendour and an eerie symmetry, but distinct notes of vanitas and memento mori. This is nature that has not been tamed and possibly never will be: a terrible beauty that pays no attention to humanity, history and ideology. Occasionally it is possible to distinguish anthropomorphic forms in works such as Monologue-03 (2010), which are lit by the same spectral light that illuminates the work of Yves Tanguy and Roberto Matta or even more recently Gregory Euclide. As with their work, these landscapes could not quite have existed in reality, reminding us that art is part dream, a dream perhaps teetering on the brink of nightmare; just like nature. In the remarkable Untitled (2013), we view a tree in winter, but there is the possibility of metamorphosis into something else, something approaching, like the masts of a ship or a face, as if through some Louis le Brocquy veil.

Where Liu’s scenes could have been the world before mankind, the canvases of Wu Jian are incontrovertibly the world during and after man’s presence. He shows with devastating effectiveness landscapes riven and torn apart by heavy industry; the various shades of soil churned and scoured with added blocks of flat colour to suggest a low-resolution JPEG image. It is manifestly modern, with identifiable forms of flotsam (astronauts, jeeps, fish etc) surfacing, and yet it seems to reach back to biblical or primordial times. It is as if a tsunami has hit these places (suggested in The Refluxing Yellow River 01), a tsunami called progress. Our destruction is aided by the elemental forces present across this entire exhibition with the tempestuous Gust (2007). The cost is not just environmental. What might the rotting detritus of Trash No. 1 (2008) be, but the carrion of what was once a human being?

Yang Liming might be viewed similarly as a pessimist, though it would be an incomplete and perhaps unfair assessment. There is certainly something of Mark Rothko’s void in his work, though this is in itself a pessimistic view. One person’s oblivion, after all, is another’s nirvana. You can view Yang’s paintings as slipping into the abyss or emerging from it, as human existence once did. There is also a force behind or within his work; in the hint of light at the top of NO3b (2011) or the red glow in NO.1r (2010). It might appear sinister but it is at least a presence, and a three-dimensional one at that. Yang seems to be edging backwards from the edge. It is evident in the shapes at the base of NO.5g (2012), which might be raindrops or the beginning of musical notes or evolving ideograms.

In the tempera paintings of Guan Jing Jing, and specifically her use of water, we find elements of chance and a mastery of control. The shapes of the paint on the canvas, whether deliberate or accidental, are transformed into islands, clouds, lakes and mountains, with these forms often indistinguishable or interchangeable. Guan ingeniously depicts water using water, blurring the lines of subject and object, much in the way Liang Quan does with tea. Both recall the ancient innovations of the Tang Dynasty poets Hanshan and Shide, who wrote their verse about the environment within the environment (on cliff-faces, trees, rocks and bamboo), reminding us again that conceptual ways of thinking and creating have always been with us.

While an eclectic series of artists with very distinct voices, there are thrilling thematic and stylistic links between those featured in Moving Beyond, sometimes complimentary and sometimes contradictory. Repeated themes emerge in very different forms; transformative landscapes, the blurring of consciousness and artistic mediums with the environment, the transience of human life, the ritualistic and aesthetic importance of calligraphy, a cultivation of mystery, an almost coded indecipherability, an emphasis on contemplation and, above all, the wisdom of looking back in order to move forward. The effect is not so much a movement, or even a culture, so much as a constellation of artists to explore, masterfully and lucidly curated by Dr Janet McKenzie, Yang Lian and Zhao Ye. This exhibition will be followed, promisingly, by more showcases of contemporary Chinese art in 2015-16. What is clear is that the title Moving Beyond applies not only to the artists involved and the culture and history they are coming from, but also to the prevailing reductive view of Chinese art in the west, a view this exhibition goes a vast way to enlighten and rectify. 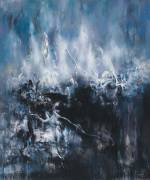 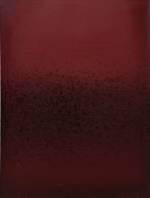 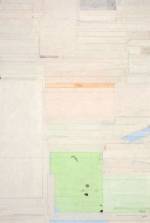