'Anselm Kiefer: Heaven and Earth' is a major retrospective that opened in Fort Worth, Texas. It will travel to Montreal, Washington, DC and San Francisco. Kiefer's paintings, sculptures, books and works on paper have been brought together using the theme of transcendence - 'Heaven and Earth' aptly addresses Kiefer's intention to define the spiritual in art since the mid-20th century. A formidable body of work that resonates in spiritual and material terms, Kiefer's achievements are of great significance.

Based on Germany's physical and cultural landscape since the war, Kiefer addresses guilt, shame and destruction by creating images laden with subtle and personal symbols of rebirth and redemption. Few artists have grasped the constant threat to modern civilisation and succeeded in orienting themselves through a remarkable plethora of visual and theoretical phenomena as Anselm Kiefer. Contemporary art has, in many instances, confused the relationship between art and transcendence, so it is deeply satisfying to accompany Kiefer on his epic journey. Kiefer inscribes a number of his paintings and installations with 'Am Anfang' ('In the Beginning') to stress the need to return to an ancient past, before religious dogma distorted enlightenment. Michael Auping observes, 'Kiefer's road to heaven, informed by an awareness of history, is paved with a scepticism that is turned as much against scientific certitude as it is against theological authority. He does not assume the existence of a paradise, only the ancient need to imagine one'.1

'Anselm Kiefer: Heaven and Earth' is accompanied by a Prestel publication of the same title. The book of more than 50 reproductions includes Kiefer's first work, 'The Heavens', as well as many other less known early and recent works that have not been published before. An evocative series of black and white photographs documenting his recent installations in Barjac in France where he works, complete the survey. Kiefer is himself highly articulate and the interview, 'Heaven is an Idea' with Michael Auping, is as an astute a comment on issues of spirituality in art as one might find anywhere. Kiefer is complex and candid, obscure and clear in one. 'Heaven and Earth' presents a most inspiring body of work, international and far-reaching in its scope, a synthesis of abstract pathos and memory.

It has been almost 20 years since Kiefer's work was introduced in America, in a large survey exhibition in 1986-87. Conceived and organised four years ago by Michael Auping, the Chief Curator at the Modern Art Museum of Fort Worth, the exhibition is excellent and the book readable and scholarly. German art since the 1950s has been complex and wide ranging. Michael Werner, the German art dealer, who has organised international exhibitions of recent German art has stated, 'German art of this generation has too many layers and deep, painful splinters to be nursed into order by our generation. This will take a long time, but it must be important because these artists make us fight among ourselves'.2

A strong dialogue between American and German art was established after the Second World War. In the late 1950s, American art was marketed as a formidable cultural force. The Museum of Modern Art's major show, 'The New American Painting', championed Abstract Expressionism from the New York School in Europe. It exerted considerable influence in Europe for the next three decades. In the 1980s, the Germans reciprocated the cultural exchange by an exhibition of less cohesive artists that belonged to different generations and ideological standpoints: Joseph Beuys, Georg Baselitz, Anselm Kiefer, Sigmar Polke and Gerhard Richter. A true or complete understanding of the work of such a complex and challenging group of artists eludes the most sophisticated audience to a degree, yet their names evoke solemnity, symbolic complexity and intellectual range. They have become synonymous with the vitality and controversy of art in the late 20th century.

Anselm Kiefer's manifold range of influences is original and illuminating. His recent paintings combine a sensual and passionate affinity with the matiere of paint - its mysterious and symbolic ability to evoke emotional states - to allude to history and layers of meaning, with an intellectual approach that is most impressive. 'For more than three decades Kiefer has explored the dauntingly large question of why concepts such as transcendence and the idea of a superior being exist throughout history.'3 It has to be said, that given the extreme fragility, complex constructions, and paintings inches deep with paint and objects incorporated, this is an extremely courageous travelling exhibition project.

For German artists since the Second World War, the legacy of Hitler's atrocities cast the darkest of shadows. Both culturally and physically, Germany was in a state of abject despair. Artistic manifestations have been many and varied; Anselm Kiefer's poignant work over the past 30 years signifies the challenge for his generation. 'There is always hope, but that must be combined with irony and, more important, scepticism'.4 A vision of heaven in today's world, Kiefer believes, can only be achieved if the full weight of history is acknowledged. 'I am not trying to illustrate religion', Kiefer has stated, 'I'm a storyteller with a broken history'.5

Kiefer was born in Germany only months before the end of the war in 1945. He studied law before becoming an artist. As a devout Catholic he was interested in the problematic relationship between church and state. Concerned with religious and philosophical issues from his student days, Kiefer brought to art an intellectual rigour that underpins all of his work. When he had studied art at the university in Freiburg, Kiefer had a number of meetings with Joseph Beuys, whose influence gave Kiefer the freedom from artistic convention. Furthermore, Beuys was the first German artist to address the Holocaust in a significant body of work. Beuys stated, 'Everyone went to church, and everyone went to the Hitler Youth'.6 Central to Kiefer's work has been the use of primal forces and the elements. Fire, with its symbolic associations of destruction, cremation and war, is a pivotal entity in Kiefer's work. Light is used to symbolise God's grace and personal enlightenment. Visions of heaven and hell and hope and destruction are employed by Kiefer in a long and inspiring process to define spirituality, always mindful however, of the state's capacity to use religion as a propaganda tool. Kiefer's landscape paintings are profoundly solemn, eluding to past cataclysm and the inevitability that history will repeat itself.

Kiefer appreciated Beuys' broad-ranging viewpoint, in which history, mythology, religion, and art formed a matrix. Beuys proposed art as a utopian synthesis of various inter-questioning disciplines that was capable of creating an enlightened worldview. While Kiefer was inspired by Beuys' openness and his grasp of a wide range of esoteric knowledge, including alchemy, his viewpoint was less utopian. Beuys became a public figure, while Kiefer would remain far more private and hermetic, with a darker, more sceptical vision. If Beuys was the shaman, Kiefer would be the Gnostic, the questioner of all received knowledge.7

Kiefer defined art's role and the role of the artist in a traumatised, post-war world. He incorporates a traditional palette as a symbol to imply the aspiration of art to seek a higher plane, of vision. In the early 1980s, an image of a palette hovers precariously between the physical landscape and the starry heavens. In certain paintings, the palette lies on the messy floor among the detritus of life; in others, it hovers over the physical desolation of Hitler's war. 'In his desperate attempt to communicate beyond the halls of philosophy, church, and state, an artist invariably finds himself in a kind of purgatory.'8 Referring to his painting, 'The Starred Heaven', Kiefer comments:

I was using myself as the hero of an imagined myth or revolution. It is humorous, pathetic, but it is an important part of researching about who we are in this universe. We are capable of thinking very high and very low. Placing ourselves between heaven and earth is more difficult.9

Kiefer uses the natural world as a beginning for his work: trees, forests, life cycles, and the mythology of serpents and angels as a means to create a dialogue between heaven and earth. For Kiefer, the universe contains spirit and matter that are in a continual process of creation and destruction. Fire and melting metals, the combining of metals; transformation and creation are fused. Alchemy is as central for Kiefer, and his work and creativity, as it was for Beuys.

In alchemy, base metals are transformed into gold. The base metal, lead, is used extensively by Kiefer to suggest creativity and spiritual transcendence, much of which has come from the roof of Cologne Cathedral, the tallest Gothic structure in Germany: 'I feel close to lead because it is like us. It is in flux. It's changeable and has the potential to achieve a higher state of gold. You can see this when it is heated. It sweats white and gold. But it is only a potential. The secrets are lost, as the secrets of our ability to achieve higher states seem lost or obscured'. He continues, 'For me, lead is a very important material. It is, of course, a symbolic material, but also the colour is very important. You cannot say that it is light or dark. It is a colour or non-colour that I identify with. I don't believe in absolutes. The truth is always grey'.10

Books and book-making form an important aspect of Kiefer's oeuvre: 'For Kiefer, the book has immense symbolic power as a container and transmitter. From the Bible to ancient illustrated manuscripts and books of law, it projects the history of world knowledge. The codifying of laws and languages, the formulation and circulation of theories of creation, the rise of religious and nation-state, and the scientific have played out in books'.11

Using impractical materials such as lead, making the pages too heavy to turn, and created on a large scale, Kiefer's books are created primarily for their sculptural and symbolic value. He points out that they are not intended to be read, but to allude to a creative dialogue to symbolise transcendence.

Architectural ruins are used to symbolise human vanity and the ephemeral nature of much of human creation, and the inevitability of destruction. Painted images and installations are created over long periods of time layering sand, ash, earth and emulsion, and then left to age and weather. Keifer states: 'Each of these buildings has a history created by its own fiction and need to demonstrate its philosophy of existence. That fiction is part of the debris of history. My images connect with that debris. They attempt to connect with the beginning or the end, with a deep and lost memory between here and there'.12

When Wassily Kandinsky wrote Concerning the Spiritual in Art at the beginning of the 20th century, abstraction seemed the most viable art form. As art in that century developed, there was a tendency for abstract art to degenerate into a mannered formalism, devoid of historical, political or spiritual significance. Kiefer's work employs abstraction with a conceptual awareness that at every point he infuses with an original intellectual commitment. Symbolic materials, found objects, a collection of pieces that represent the minutiae of life but allude to the primal issues of human existence, are all collected, stored and employed like the lost images from one's personal past and from history. The grey minimal canvases, built up from layers of impastoed chunky materials, destined to break away from the painting in time, convey a message direct to the subconscious, enlightening the present physical moment in life, reminding one that however grim the past and future may be, the search, the journey, and believing in both is fundamental to being human, and that art has a pivotal role to play. 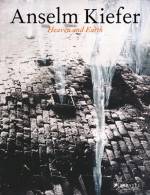 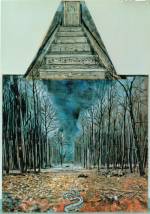