America After the Fall: Painting in the 1930s

America After the Fall: Painting in the 1930s

This is a fabulously varied exhibition with a sting in the tail. The times, they were a changin', but so much remains the same 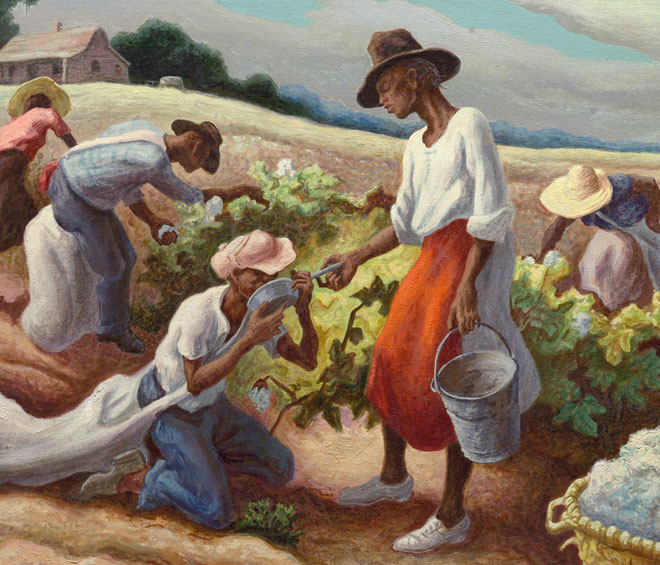 In October 1929, the roaring 20s came to an abrupt end as shares on the New York Stock Exchange tanked and America began its transition from the heady era of The Great Gatsby to the dusty hardship of The Grapes of Wrath. Painting, too, as is its wont, marked this change over the course of a decade, which deepened the divide between the haves and the have-nots. This, then, is the eponymous “fall” that saw the rug pulled out from under the powerhouse that was the American financial system. By 1933, more than a quarter of the American population would be unemployed.

If all this sounds familiar, that’s because history has a funny way of repeating itself. Bust follows boom, famine follows abundance, and it is during these times that the political right has a nasty habit of rearing its ugly head, quite literally in the case of Peter Blume’s surreal dystopia The Eternal City (1934-37). Benito Mussolini pops out of a jack-in-the-box as a green-faced, bug-eyed gargoyle while his generals scatter crowds in the ruined Roman forum behind him. An old woman, twisted by age, sits on the fragments of a classical column, holding her hand out futilely.

This isn’t the darkest image of the exhibition. On the opposite wall Joe Jones’s American Justice (1933) offers a haunting scene. A black woman, stripped to the waist, lies dead in front of a group of hooded Ku Klux Klan members who chat casually around an unseen light source while a noose swings in the light of a burning house. The figures are solid and naive, almost Gauguinesque, if Gauguin had tackled such sinister subjects, and with the terrible deed done, we are forced to imagine the violence of the night. She is the tragic heroine lifted from Piero di Cosimo’s A Satyr Mourning Over a Nymph (1495), complete with attendant dog, but this is no elegant Renaissance death scene. This is ugly murder.

As the depression wore on, increasing numbers of people travelled to the cities, leaving rural life behind. The artist Grant Wood underwent just such a journey after his father died, moving with his family from a farm in Iowa to the industrial city of Cedar Rapids. Several of his paintings are scattered throughout this exhibition, most with green rolling hills evoking days long past. But, of course, Grant’s most iconic work is American Gothic (1930), which has left North America for the first time to travel with this exhibition.

Grant cast his sister and dentist in the roles of a farmer with his daughter. The couple stands with stern, careworn faces, in front of a farmstead sporting a window with a gothic arch. Grant looked towards northern Europe for his inspiration and these characters bear the pinched, sallow expressions of a Jan van Eyck painting. The woman is buttoned up to her neck, the man, with glinting pitchfork in hand and thin pursed lips, stares us down. They form a barrier to the land behind; they are protecting their disappearing way of life and we, the gallery-going urbanites, are not welcome.

Only Edward Hopper could rival Grant for the title of most prominent realist of the era. He, too, looked to Europe for his inspiration; Édouard Manet and Edgar Degas were influential to the development of his solid style. It is well known that Hopper was adept at representing the loneliness of city life. In his New York Movie (1937) an almost empty cinema is presided over by a blond usherette in strappy heels. She has, no doubt, seen the film countless times before and looks down at the floor, deep in thought under the lamplight, a characteristically solitary figure.

But it’s not all doom and gloom; there’s hope here too. Aaron Douglas’s highly measured art deco painting Aspiration (1936) literally points to a brighter future for African Americans. In the foreground, shackled hands rise up, silhouetted against a pastel scene that sees two men and a woman, each holding tools of industry and education, looking up to a glowing metropolis on a hilltop. The central man points the way. That, he is saying, is where our future lies. It is a representation of the American dream stripped down to the bare essentials.

There are more playful canvases, too, chock full of bustling characters, some desperate for fun, some raucous and jolly. Drunken sailors with muscular frames flirt with girls – and boys – while on shore leave, crowds of stylish women bustle outside the sales, and young men and women linger by a cinema box office, under saucy film titles. There was fun to be had for those living in the city with a pocket full of dimes.

The exhibition ends on a greyer note. An early Jackson Pollock that more closely resembles a Picasso than the work of a future abstract expressionist joins a tondo by Philip Guston representing the bombing of Guernica with a grisly monumentality. Women, children and a half-naked, Christ-like figure are flung from the epicentre of an explosion, while Luftwaffe planes cut through the stormy skies above in deadly lines. Painted in 1937, Bombardment foreshadows the devastation that would befall the whole of Europe, and then spread around the world.

This is a hugely varied exhibition packed with clamouring voices that grapple with what it means to be American at a time of change and uncertainty. A time very like our own. And that, I think, is what gives this exhibition a real edge, because, it reminds us of the importance of artists, their ability to cut to the heart of things, and that it is imperative that they be allowed to work uncensored. 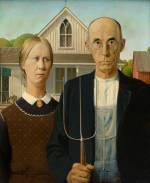 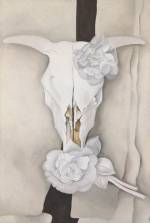 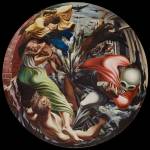 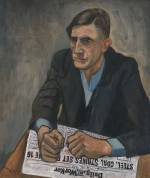