Astrup described himself as a naive naturalist painter, and his richly colourful landscapes are potent with narrative. This is the first major show outside Norway for an artist who has been overshadowed by his countryman Edvard Munch

The north Norwegian light gives Nikolai Astrup’s paintings an eerie sense of dream, and his fascination with the mood of landscape adds to these images some kind of haunted foreboding. Where the sun barely dips to the horizon in summertime, and all day long the light is like late afternoon, Astrup’s richly coloured landscapes are full of high contrast, deep-shadowed trees blocked against blue and lilac skies, dark foregrounds in a myriad of greens, and distant mountain tops bleached in light.

Astrup (1880-1928) is little known outside his native Norway, overshadowed by his countryman Edvard Munch, who was 17 years Astrup’s senior. While Munch’s images are well known for their figures and environments that sway and flow, Astrup’s images are rooted in his familiar landscape. It is the weight of that landscape, Astrup’s own history embedded there, and the physicality of the space, impacted by the far northern light, that give Astrup’s images a sense of being grounded in Nordic fairytales and Viking myths.

Astrup’s father was a Lutheran parson – when Nikolai was a child, the family lived in the parsonage, a rundown white clapboard house. (Ian AC Dejardin, the Sackler director of Dulwich Picture Gallery, in his text for the exhibition catalogue, explains how a local doctor warned: “To an exceptional degree [the house was] a dangerous place for the health, where people should be forbidden to stay.” Dejardin goes on to explain that three of Astrup’s siblings died in one terrible week when he was seven years old). Astrup painted that childhood house from memory numerous times. In The Shady Side of Jølster Parsonage, painted in 1908, Astrup has the figure of a young girl gazing into the window – perhaps she is looking back into his childhood days, remembering the lost siblings?

Another painting, titled The Parsonage (1928), echoes the New England painter Edward Hopper’s well known images from the 1920s to 50s of white clapboard houses lit in bright, clear light, and the later paintings of Andrew Wyeth’s Pennsylvania: these obvious parallels in the use of the strong shape of a house surrounded by a brightly lit scene all hold a potent emotional key embedded in the powerful sanctuary of a home. A childhood home – so the French philosopher Gaston Bachelard tells us in his 1958 book The Poetics of Space1 – is an oneiric house, the environment in which a child learns how to open a door and climb a stair, and our physical and psychological memory is imbued with these lessons. “Through dreams, the various dwelling places in our lives co-penetrate and retain the treasures of former days … The house shelters daydreaming, the house protects the dreamer, the house allows one to dream in peace …”
Astrup’s dreams were strong but fretful – his parents sent him to a cathedral school, hoping he would take up a career in the church, but in a letter to a friend (an extract of which is published in the exhibition catalogue), Astrup wrote: “They will never succeed in robbing me of the desire … I am desperate to be allowed to go out and learn something about painting and drawing.” Astrup’s longing for creative exploration put him in conflict with his father. When he was 19, he was allowed to go to Oslo and begin his studies, although his father never gave him any financial support. First, he studied art at the Royal School of Drawing, and then he went on to study at the Norwegian artist Harriet Backer’s painting school. In 1901, he was awarded a scholarship to study at the Académie Colarossi in Paris, where his teacher was Christian Krohg. Both Backer and Krohg believed Astrup to be “exceptionally talented”. Astrup subsequently travelled to Berlin and to London in 1908, writing in a letter to a friend that he believed Joshua Reynolds “to be the first English Impressionist”, and John Constable to be “the best English artist when all is said and done”.

Despite his interest in European painting and his travels overseas, unlike most of his artist colleagues who set up studios in Oslo and other cities, Astrup decided to return to Ålhus the village where he was born, and to paint the landscape as he believed “ordinary people [saw it] straight through the air right into the thing”. By this, he meant avoiding the painterly (sometimes romantic) expression of describing distance by misting a blue far ground, and sharpening the clarity of the near ground. Because of this determined overall clarity and purposeful detail, Astrup’s paintings have an almost naive sense of space and the landscape seems potent with narrative.

In his Ålhustunet, Jølster (1900s), a line of trees guides our eye from foreground to middle ground through at least eight tones of green, up to a field of emerald, surrounding a village and a white barn, behind which are more fields of various greens, before the ground rises up the moss, ochre, orange, green and yellow mountainside. And, yes, the colours are very important. With colour and light, Astrup evokes the mood of the landscape: sometimes fresh sometimes foreboding, he plays with these elements, visiting the same view (in paintings and in prints) and varying the colours and tones exploring how this can change the feel of place. His insatiable desire to develop his images meant that, although he made prints, he never made any two the same – and he also explored different methods of working – printing on to a painting and painting on to areas of a print.

Despite Astrup’s energetic process, he was always full of self-doubt – and, for his fascination in the narrative and magical possibilities of landscape, he was ultimately seen as an outsider. Yet at the same time as Astrup was working in Norway, there were other painters across different continents, whose interest in colour, landscape and narrative, traced a line of almost fauvist expressionism across cultures and generations, Marsden Hartley (Maine, US), James Dickson Innes (Wales), and later Winifred Nicholson (UK) and Colin McCahon (New Zealand). These practitioners championed an extraordinary exploration of colour in landscape, delighting in the possibilities of observation enhanced by heightened spectrums of tone and light.

Astrup’s delight in landscape, mood, magic and colour come together in his numerous paintings of grain poles and also in his studies of midsummer-eve bonfires. The grain poles standing like trolls waiting for something to trigger their motion appear mournful in their stooped poses, while the bonfires literally dance a blaze of fire in the centre of each of Astrup’s images. When he was a child, his father forbade him to attend these pagan rituals. Astrup remembered: “I had to stand at a distance behind the fence and watch and listen to how the others danced around the fire and shouted with pleasure … I had to stand on the outside … it was surrounded by mysticism, ungodliness and raw paganism.” These marvellously animated images in which fire rages so strongly and figures dance wildly, surrounded by mountains under night skies, surely stand to represent Astrup’s short and troubled life [he died when he was 47].

Following his own path, he fuelled his fires from the outside, refusing to conform to the critics of his day. For this and for his courageous exploration of landscape, enriching our understanding of how place can be so potent with narrative and various in mood, he must be celebrated and applauded. 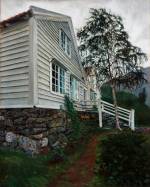 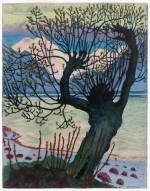 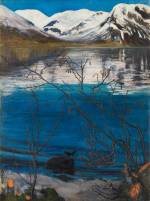 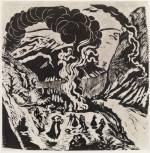