Alma-Tadema: At Home in Antiquity

Alma-Tadema: At Home in Antiquity 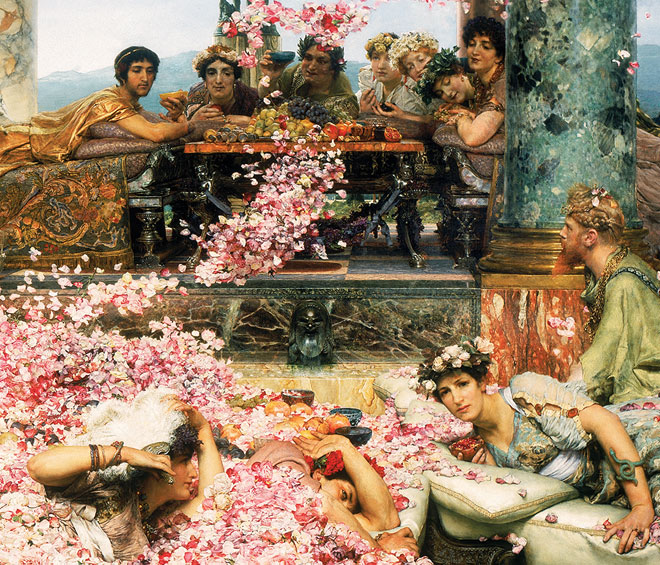 The sky is the most palpable presence in Lawrence Alma-Tadema’s (1836-1912) The Finding of Moses (1904), a rose-blue haze that emanates from the far-left corner of the canvas and intermingles with the milky sea, its wispy ethereality contrasted with a sharply defined thicket of delphiniums. Although the painting contains more than a dozen figures – including the lusciously attired pharaoh’s daughter, slaves of both genders and the sainted child itself – what really draws the eye is that celestial glow, an alluring luminosity that, although a world apart in technique, matches the gleam of the impressionists. It is this gleam that most beguiles in Alma-Tadema: At Home with Antiquity, an expansive survey of the Victorian academic artist at Holland Park’s Leighton House. 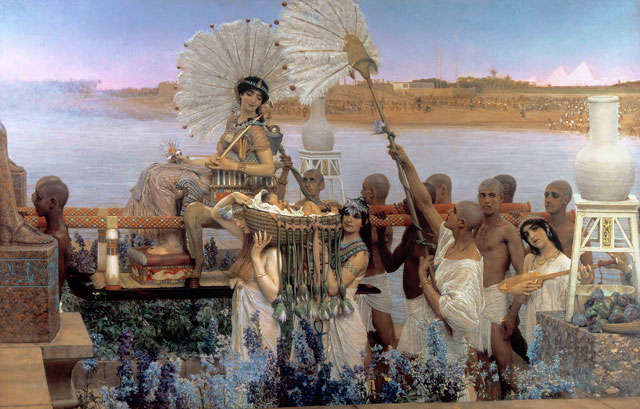 The Bloomsbury critic Roger Fry famously dubbed Alma-Tadema’s paintings “highly scented soap,” which is both offhand and astute. Alma-Tadema’s great gift was to convey sensorial experiences: the perfume of flowers, the rushing of waters, the aura of the sea, the touch of warm marble. The pre-Raphaelite Edward Burne-Jones declared with a mixture of admiration and mockery: “No man has ever lived who has interpreted with Alma-Tadema’s power the incidence of sunlight on metal and marble.”

This talent was the result of intense study and precision. When told as a student that his marble had the texture of cheese, he took off to Carrara to practise; the Finding of Moses itself took two years to paint after six weeks of sketching in Egypt. Such engagement extended to smaller objects. While crafting his most famous work, The Roses of Heliogabalus (1888), Alma-Tadema spent four months painting flowers delivered weekly from southern France. This thoroughness shows: the cascade of petals that ripple across the canvas seems on a different plane from the unfortunate dinner guests being smothered beneath them.

At his death, Alma-Tadema was the most decorated painter in Britain, a Royal Academician, knight and member of the exclusive Order of Merit. From an unpromising provincial childhood in the north-western Netherlands (his birth name was Lourens), he had reached the apex of British high society. A gregarious host with a fondness for toga parties, his illustrious visitors included Tchaikovsky, Enrico Caruso, Winston Churchill and John Singer Sargent, the last of whom painted a panel for his house. Alma-Tadema was a shrewd businessman, making much of his fortune through the dissemination of prints. He was also a devoted family man, who encouraged his wife, Laura, and his daughters to pursue their own artistic and literary careers. So prominent was he that it was rumoured he had painted a series of pornographic images at Windsor Castle for private perusal of king Edward VII himself. 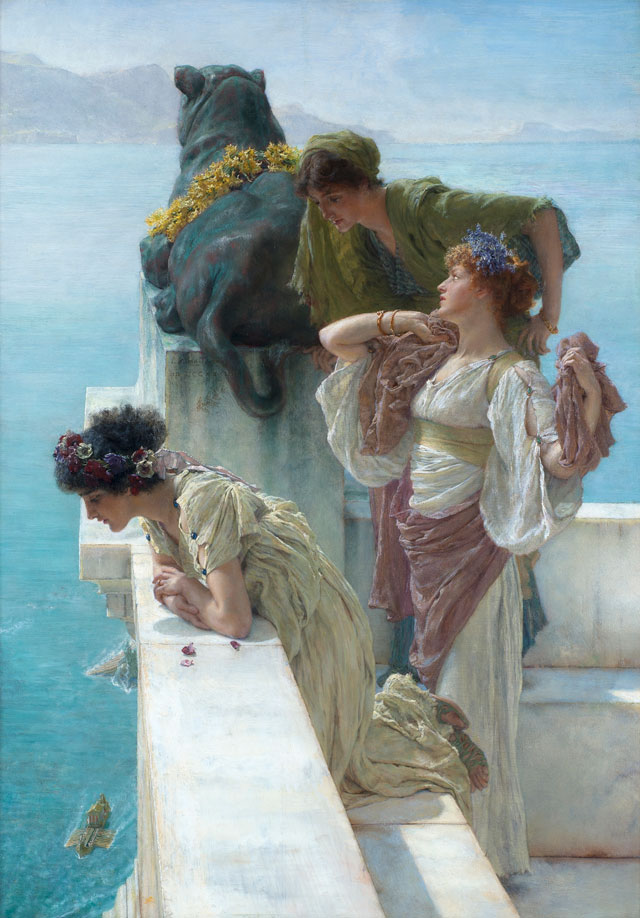 The tide turned with extraordinary alacrity. In 1913, a year after Alma-Tadema’s death, a commemorative retrospective at the Royal Academy was attended by a mere 17,000 visitors. As the paramount late-Victorian painter, he was the natural target of those excited by post-impressionism and modernism, and an easy scapegoat for those keen to distance themselves from the hypocrisies of 19th-century Europe. Obscurity followed. According to Alma-Tadema’s biographer, Russell Ash, a mid-century critic “once felt compelled to explain that, despite his strange name, [he] was not a woman”.

More recently, an extreme revaluation has taken place. The Finding of Moses, which in the 1950s had failed to find a public collection willing to take it as a gift, sold for $36m (£28m) in 2010, making it the highest-valued classical Victorian painting. Even so, At Home in Antiquity is the artist’s first sizeable London exhibition since 1913, and the only significant show in Britain since a 1997 retrospective at Liverpool’s Walker Art Gallery that attracted 53,000 visitors. It collects more than 130 works by Alma-Tadema and his circle, including pieces by his wife, Laura, and daughter Anna.

At Home with Antiquity was previously displayed at the Fries Museum in Leeuwarden and Vienna’s majestic Belvedere, but it is hard to imagine a better venue for it than Leighton House. The home of Alma-Tadema’s friend Frederic Leighton, it is London’s finest remaining example of the grand Victorian artist’s residence, with a light-suffused studio and a stupendously lavish Arab-inspired hall; Alma-Tadema’s equally grand house (“Probably,” opined the Pall Mall Gazette, the finest studio in the world”) in St John’s Wood was auctioned off and divided into rooms soon after his death. At Home with Antiquity thus provides the opportunity to see Alma-Tadema in a context with which he would have been familiar. 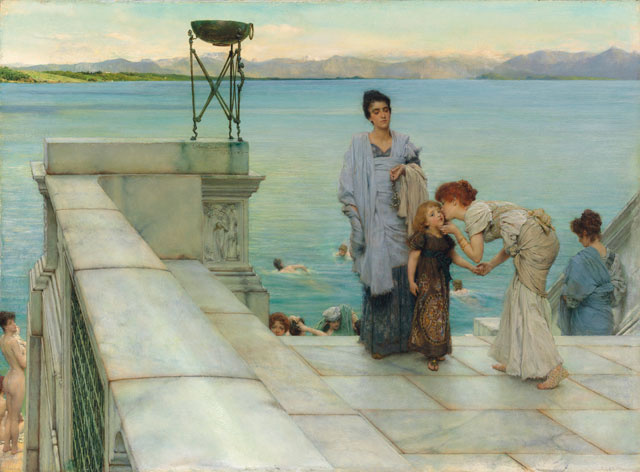 The domesticity ingrained in Leighton House also provides a neat echo of Alma-Tadema’s mature work. While academic contemporaries fixated on legends and imperial pomp, Alma-Tadema quickly became a specialist in the more everyday. Many of his mature works, for instance, portray classically attired models lounging on benches or gazing out into sea. A Kiss (1891) situates the humdrum occasion of a woman kissing a child into an expansive Hellenic seascape, while the three figures in A Coign of Vantage (1895) look more like Victorian ladies on their first trip to Bournemouth than heroes’ wives pining for their long-departed husbands. Alma-Tadema was both at home with antiquity and adept at housing the Victorian bourgeois experience within an antique veneer, and in doing so provides a key testament to the bourgeois aesthetics of his time.

Although his art is now indelibly associated with visions of ancient Greece and Rome, Alma-Tadema’s early practice in the Low Countries was focused rather on the tales of Frankish kings. The ground-floor drawing room of Leighton House documents this medievalism, full of Dutch Golden Age-esque window views and a dusky palette. Works such as Queen Fredegonda at the Death-Bed of Bishop Praetextatus (1864), in which the bed-bound ecclesiastic points an accusatory finger at the murderous monarch as she taunts her dying foe, combine kitsch with a wan claustrophobia.

It was a honeymoon trip to Italy in 1863 that ignited Alma-Tadema’s obsession with the ancient world, and began the transformation of his career. His early classical scenes retain an ornamental stiltedness, but show an increasing confidence in dealing with light, as well as a flair for odd framings and perspectives. A Pyrrhic Dance (1869), for instance, truncates our view of the performing gladiators on one side and the audience in the other. It appears almost like a freeze-frame in a cinematic panning shot. Alma-Tadema has long been seen as a direct influence on epic films from Cecil B DeMille’s The Ten Commandments to Ridley Scott’s Gladiator (a tale told convincingly towards this exhibition’s close). A Pyrrhic Dance suggests that this inspiration was not merely a result of his architectural constructions, but also the distinct way he composed scenes, viewed as if through a lens.

Alma-Tadema’s first wife, Marie-Pauline, died of smallpox in 1869, and after a period of depression he moved to London the next summer with his two young daughters. It is from around this point that Alma-Tadema entered his prime, and began his ascent to the peaks of the British salon establishment. Yet a fondness for the unexpected remains. The Staircase (1870), for instance, is painted on a tall, narrow canvas, and gives much of its space to depiction of the titular feature, dynamically angled to allow a glimpse of the landing above. In The Roman Potters in Britain (1884), a russet archway curves to divide a foreground figure from those at work in the background.

In the artist’s final two decades, he hit on the radiant, mannered style that has become his signature, but even here there is a sense of experiment. The Voice of Spring (1910), which portrays a female figure sitting on an enormous marble bench, includes a startling array of different styles. The woman appears almost blurred in comparison to the dazzling marblework, which centres around a peculiarly lifelike male nude. The sky glowers like a Turner above an almost pointillist field of flowers populated with miniature Claude Lorrain-like figures. It feels as if one is looking at several different paintings at once, yet somehow the work forms a cohesive whole. Alma-Tadema’s habit of painting darker colours on to a pale background (as opposed to the conventional inverse) cultivates the sense of an enchanted world.

Presented with such work, it is clear that Ruskin’s famous dismissal of Alma-Tadema as “the worst painter of the 19th century” is more indicative of the critic’s own ideals and prejudices than the artist’s quality. Alma-Tadema’s technical impeccability, bourgeois poses and neo-classical idylls stand in extreme contrast to the moral truth, gothic-derived freedom and truth to nature the writer demanded. Alma-Tadema may not be a figure of such animating genius, but he is one of great craftsmanship, artifice and sympathy. At Home with Antiquity makes a compelling argument for his rehabilitation. 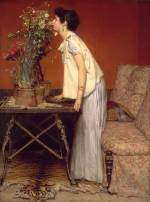 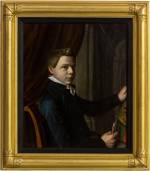 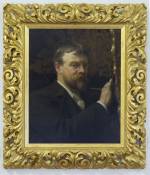