Accustomed to working in a variety of media and weaving together disparate sources of high and low culture in the reconstruction of personal and collective history, Raed Yassin, born in Beirut in 1979, displays three series of works in his Kissing Amnesia exhibition. The drolly titled Yassin Dynasty presents the incongruous portrayal of battles of the Lebanese civil wars on a series of, at first glance, apparently Chinese porcelain vases. Ruins in Space,a multimedia piece centred on the fictional relationship between two opera divas composed of image, sound, vinyl record and text, plays with Yassin’s love of fiction and cultural crossovers and, as he puts it, misunderstandings. But the most compelling element in the exhibition is the Dancing, Smoking, Kissing series of silk embroideries that Yassin has fashioned as the gorgeous simulacrum of his lost, half-remembered, and sometimes invented, childhood photographs. A pop-culture junkie, particularly with regard to the film and music of the Arab world, Yassin is also a classically trained double bass player-cum-turntablist, record label impresario and art collective founder.

His compulsive need to recreate a lost past, and his attendant fascination with cultural hybrids are, it hardly needs saying, compellingly charged by the seductive setting of Lord Leighton’s own, absurd and beautiful, fantasy construction. Presenting his work for the first time in London, Yassin explained his intentions, methods and the unreliably slippery nature of memory: “The Dancing, Smoking, Kissing, embroidered panels are based on lost photographs of my family. My aim was to reconstruct the lost family albums. I chose the medium of embroidery and textiles because I grew up in a family of tailors so the materials are integral to me and intimately bound up with my childhood memories. I started to make sketches of the lost photos, trying to recall how people related to each other in my image. Then I would look at fashion magazines to get a sense of the fashion of the time.”

For all the tactile, “handmade” intimacy of this medium, it is typical of Yassin’s fluid transition between art and disposable, mass-made object that the panels are computer-embroidered. He took the initial sketches to a specialist in creating files for computer embroidery and checked existing photographs to make sure the resemblance with his mother and father was sufficient and see if any adjustments were needed. “The computer would then do the rest.”

Yassin was clear that he did not want to make unique images and, playing with the idea of photography, preferred the notion of serial images, also incorporating elements of machine production in order to allude to the relationship between art and mass production. The edges of the panels are curved to reflect the 1980s photographic print format of his childhood, while the decorative backgrounds, exquisitely poised between kitsch and a ludic beauty, were based on textiles sourced from shops selling curtain fabrics.

At their heart, these images are poignant enactments of the elusive process of remembering. “Memory is not fixed and can be a medium open to fiction,” he said. “Sometimes you start to weave stories about these photos. I don’t know how accurate these images really are, but I do know that these are the images that stuck in my mind.”

It might be said that there is an element of selectiveness in the images the mind retains and it is impossible not to notice that Yassin’s embroidered snapshots all capture apparently joyful, and jokey, moments: birthdays, dancing, balloons, the infant Raed play-smoking, or being held aloft in the single hand of his relative in a show of strength, typical performances in Lebanese family photography. Also popular was the custom of taking photographs of the children naked, now, as Yassin says, distinctly problematic, but not so during his childhood. Most are remarkable for their arresting composition and singular viewpoints, set against the flatness of the mostly floral patterns.

The loss of his father when he was five and his mother later, Yassin suggests, drives his obsession with reconstructing the past, and many of his works are centred on the subject of family. It should be said that some of the actual events of his family history are dramatic but unclear, an ambiguity Yassin has actively cultivated in his fascination with the relationship between fact and fiction, drama and melodrama. The unsolved murder of his father in Beirut in the 1980s, for example, gave rise to his 2011 photographic series, Who Killed the King of Disco, a kind of B-movie pastiche in which Yassin reimagines his father as an Egyptian screen idol.

Suggesting the conspicuous unreliability of memory, one of the embroidered scenes here, With Imad Hamdi and his Twin, is one that Yassin was convinced he had witnessed of a famous Egyptian actor with his brother. Yassin’s sister assured him that the scene had taken place before he was born, but the image was talked about so much and so lucidly that it became a lived event in his mind, a presumably universal experience when conjuring up childhood experiences.

In Yassin Dynasty, too, he emphasises the play between consumerism and craft, as well as the act of remembering, in the sense of personal recollection and memorialisation. Yassin depicts several battles of the civil wars in Lebanon that “changed the face of the country geographically and democratically”. Once again, the representations are forged from memory, with Yassin assembling the designs on the basis of conversations with fighters who had taken part in the war. “I took the descriptions to a painter and asked them to paint a version in this very specific, historical style, creating a kind of confusion because I’m interested in cultures misunderstanding each other, because then accidents happen in the contemporary work.” Yassin subsequently took the paintings to China’s porcelain capital, Jingdezhen, and worked with the porcelain masters to transfer the designs to the vases in their style.

“This was also important because I wanted to have a distance, I didn’t want the work to be my own. I wanted them to be done by someone who doesn’t even know what Lebanon is and what’s going on there. I wanted them to just do the job and be as outside of the situation as possible. I gave each design of a particular battle to a different Chinese master so the style varies between vases. The name of the battle is written in Chinese on each vase and each bears the seal of the master because I wanted to respect the makers and not pass the work off as my own. I’m someone who works in different media, but mainly using concepts and then creating a kind of chain of production that plays with the idea of mass production and art object, and how these pieces travel from one site to another.”

The impact of the battle scenes, with their tanks, machine gun-toting soldiers and flame-engulfed buildings, confounds expectations of the epic, but harmoniously stylised, and therefore more distant, abstract, aesthetic of Chinese porcelain, an effective disconnect echoed in the non-existent “dynasty” of the work’s title.

The third work, Ruins in Space, originally commissioned by the Gwangju Museum of Art in South Korea, opens the exhibition. The original curators invited Yassin to produce a narrative based on the fictional encounter between two divas, Umm Kulthoum from the Arab world, and the Korean Lee Nan-Young. “This appealed to me because I’ve always been interested in fiction and lies and why people lie, how imagination can be weaved together with facts to create something else. I imagined a relationship between the two divas and built a story around them, a story recounted in a text that forms an integral part of the work. I like the confusion that arises from the spectator believing it might be a true story, or at least wondering if it’s true. It’s just to question the audience because I do demand some input from my audience, I can’t just give them everything. I want to invite their involvement and for them to question how it’s made. A lot of thought goes into these works, I like to question the social aspects and to create a collective experience that relates to history and how as humans we consume history and stories.” 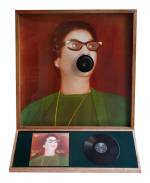 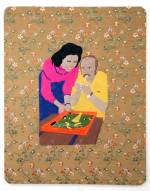 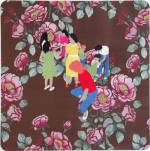 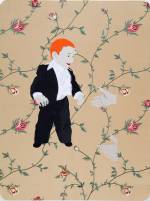 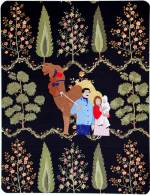 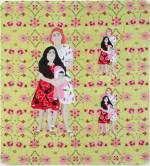 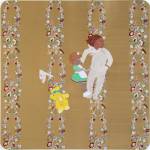 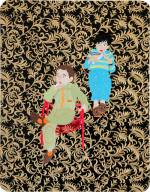 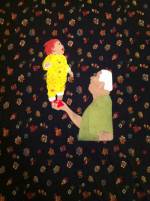