Julie Cockburn – interview: ‘My work is about telling the truth, but in a really circuitous way’

Julie Cockburn – interview: ‘My work is about telling the truth, but in a really circuitous way’

At the opening of her latest show, Telling it Slant at Flowers Gallery, Cockburn talks about happy accidents, the labour that goes into her work and the simple joy of circles 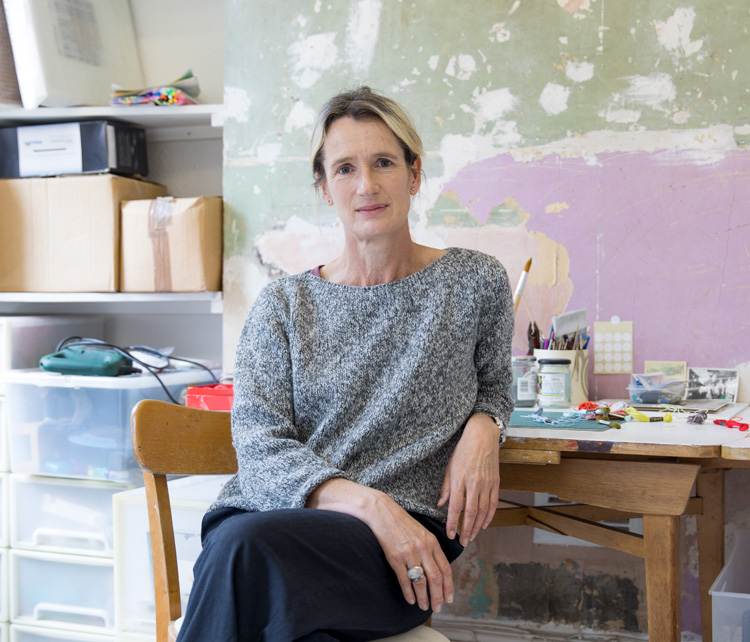 Julie Cockburn’s artworks might look simple at first glance. Many take the form of a repurposed photograph, a landscape for example, embroidered with a receding arc of brightly coloured dots, or a face obscured by geometric shapes. They are elegant, playful and even a little trippy – some might call them sophisticated doodles – but the reality is that they are the product of a patient mind and a skilled hand.

Cockburn has called her current exhibition at Flowers Gallery on Kingsland Road, Telling it Slant, a reference to an Emily Dickinson poem. “The poem is about telling the truth,” she says, “but telling it in a really circuitous way, and that is what I do with my work.” Titles are important in her practice, providing clues to how she feels about the images she works on.

I mention a collage, made from an old painting several years ago, which she called The Adulterer. The face of the man has been cut into triangles and rearranged, so that it looks like a reflection in a fractured mirror. “There was something about him that I didn’t particularly like,” she tells me. “That’s an awful thing to say, because I don’t know who he was, but there’s something about having your portrait painted in the first place.”

Does she ever wonder about the lives of the people in the images she works on? “I don’t really wonder about who they are. I’m much more drawn to them as a generic woman, or man, or landscape.” Perhaps that is why the “adulterer” in the painting suffered the fate he did; he was not enough of an archetype. But a photograph of a tidy-looking young man makes several appearances in this exhibition. “He’s very neat and the plain background gives me space to add my intervention.

The more static and poised they are, the more room I have to make a noise.” For this reason, she prefers studio portraits, but with the rise of affordable, lightweight cameras, these declined after the 1960s, meaning that much of her work has a tinge of nostalgia about it.

Cockburn finds her source material online and in junkshops and describes the moment of discovery as euphoric. “They’re like gold dust,” she says emphatically. After scanning the photographs into Photoshop and playing with the possibilities digitally, she begins work on the final design, first by backing the original with fabric, so that the needle doesn’t tear it. Every stitch is embroidered by hand and a single piece might take days to complete. Has she ever considered hiring an assistant? No, she says, but admits that the process can be laborious. “I start really excitedly. But then, when I’m working on something for 10 days, I think: ‘Oh, God, I just really want this to finish.’”

Even pieces that appear to be the product of spontaneity are meticulously planned. I ask about another piece of hers I have seen, a snapshot of a family walking down a street. The people’s faces are covered in white squiggles that look as though they have been added with a crayon, but I learn that she made the design in Photoshop, printed it, and then coloured every drawn pixel individually with paint. Nothing Cockburn makes is straightforward.

I’m interested, too, in why discs appear in so much of her work, often dancing over mountainous landscapes and across the faces she collects. They remind me of tiddlywinks or counters from childhood board games and I like them instantly for that reason. “There’s something really nice about a circle,” she tells me. “They’re kind of perfect, aren’t they?” She goes to the corner of the gallery and picks up a yellow glass bead, enlarged to the circumference of a small plate. “This is quite a good example of something that is really graphic and really hard, but it’s beautifully soft at the same time.” She hands it to me; it is surprisingly heavy and cool. She has placed these miniature sculptures around the gallery to “punctuate” the exhibition. I turn it over to investigate the base, but she sees, and tells me I’m holding it upside down.

We sit, staring at the framed dots on the wall and search for a word that explains their allure. Visually tactile? I offer. “Visually tactile. That’s very nice,” she says. Cockburn trained as a sculptor, and her concern for depth shows in how she makes her embroidered designs seem to recede into the distance, or form a cage around the head of a person photographed decades ago. “Somebody once said that I work in two and a half dimensions. I see these photographs – particularly these found photographs – as three-dimensional objects and I’m trying to accentuate that depth.” With her most recent works, the patterns that circle the black and white faces seem to cast shadows, shadows she has printed on to the image. She explains that this is part of a process of building up layers, which starts with the sitter and the photographer, and ends with her final stitch.

I ask whether anyone has ever recognised a relative in the photographs she uses. “Once,” she tells me. “A lady got in touch and said that the picture was of her grandmother. She bought it.” The piece was – rather fittingly – titled The Accident.

Despite the amount of planning and precision that goes into Cockburn’s works, happy accidents do happen. She stumbled across two Polaroids of people feeding seagulls and they lent themselves perfectly to a new direction in her work. In one, two women sit on rocks, their arms outstretched as though they are holding up long threads. Cockburn enlarged the images and sewed strings of yellow beads from the woman’s hands to the seagull hovering nearby. The composition is perfect, as though, across the decades, sitter, photographer and artist have conspired to produce the image. And in way they have, for more than one creative hand has made its mark on these layered works of art.