This brightly coloured stainless steel, aluminium and fibreglass installation, depicting Sesame Street’s Big Bird swinging on a crescent moon, is just what is needed after a year of despair 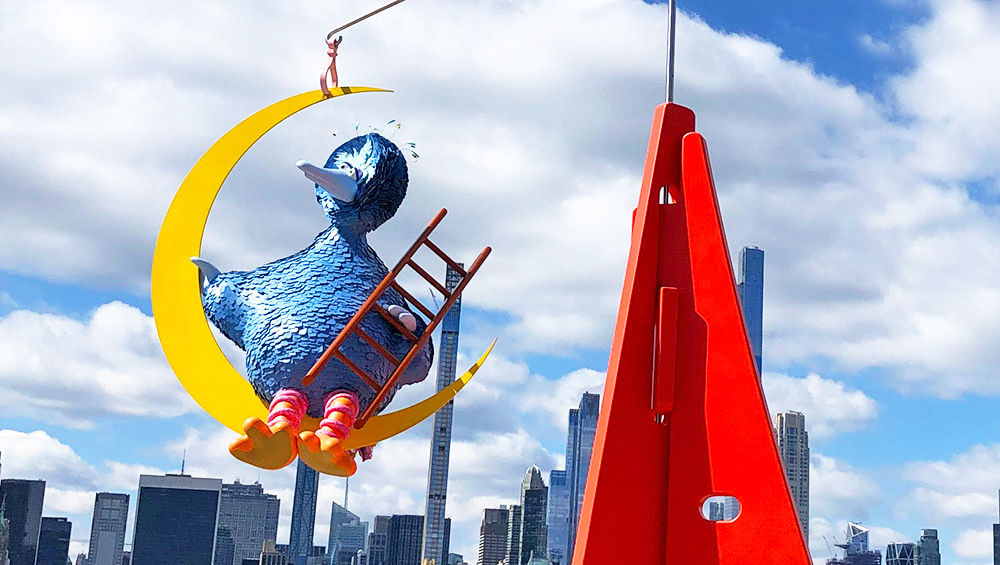 It’s a bird, a big bird, which the countless millions across the planet who have grown up with Sesame Street, the five-decade long children’s television programme will joyfully, proprietarily recognise as Big Bird. Here, however, their beloved friend has blue plumage instead of bright yellow, approximating the colour of the character’s South American cousin, Garibaldo, which Alex Da Corte (b1980, Camden, New Jersey) first saw on Sesame Street as a child in Venezuela. It might also remind us of the 1985 film Follow that Bird, in which our fine feathered friend was kidnapped by crooked, comically inept (and literal-minded) circus owners who painted him blue as a disguise and to coordinate with the song they force him to sing, I’m So Blue. (I say “him”, but how does Big Bird identify these days: he/him; they/them; it?) Da Corte, who also often disguises himself as other characters in his videos and other works, has long been fixated on Jim Henson and his Muppets, so making the amiable Big Bird the quixotic hero of his new installation, As Long as the Sun Lasts, seems almost predestined. 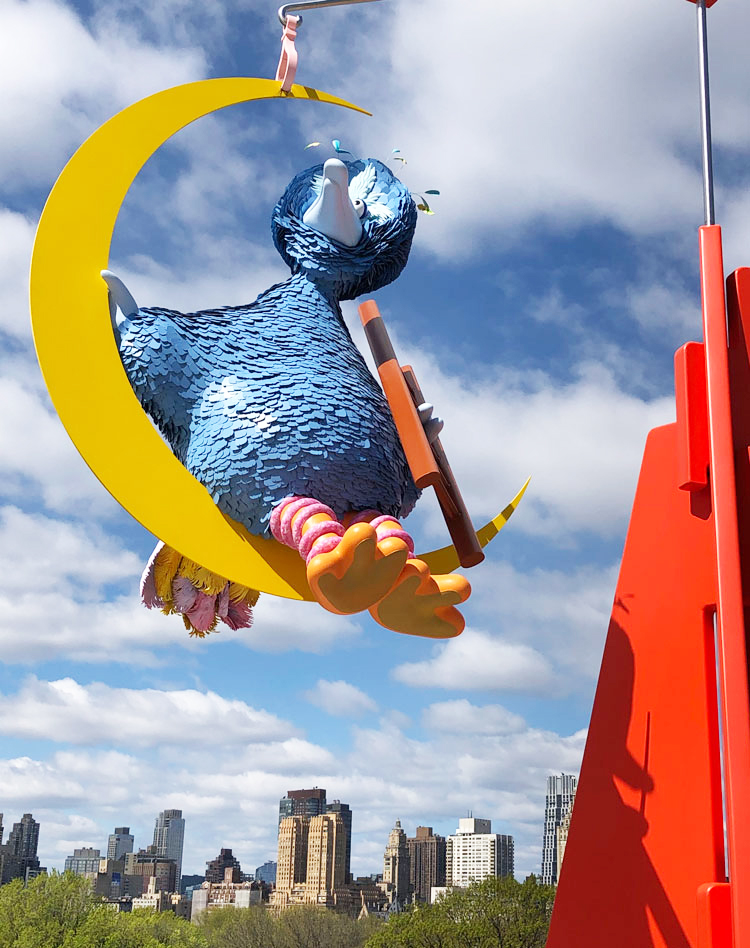 For this most recent edition of the Metropolitan Museum of Art’s popular outdoor installation series on the Cantor Roof Garden, Big Bird is perched gallantly, if somewhat precariously, within the curve of a yellow crescent moon (like the boy in the DreamWorks logo, who casts his fishing rod into space), scanning the changing horizon. He also looks a little lonely, minus his Muppet cohorts, no doubt feeling like many of us this past year minus ours. Da Corte gives Big Bird a short ladder to hold, as if it were a shield or an attribute, an implement that is no longer technically innovative but is nonetheless tried and true, weighted with historic and metaphoric associations. And because it is a two-way conveyance, it conveys an ambiguity of purpose – is this ladder for ascent or descent? Ad astra per aspera? Or a dive back to terra firma? Big Bird might be astutely hedging his bets. 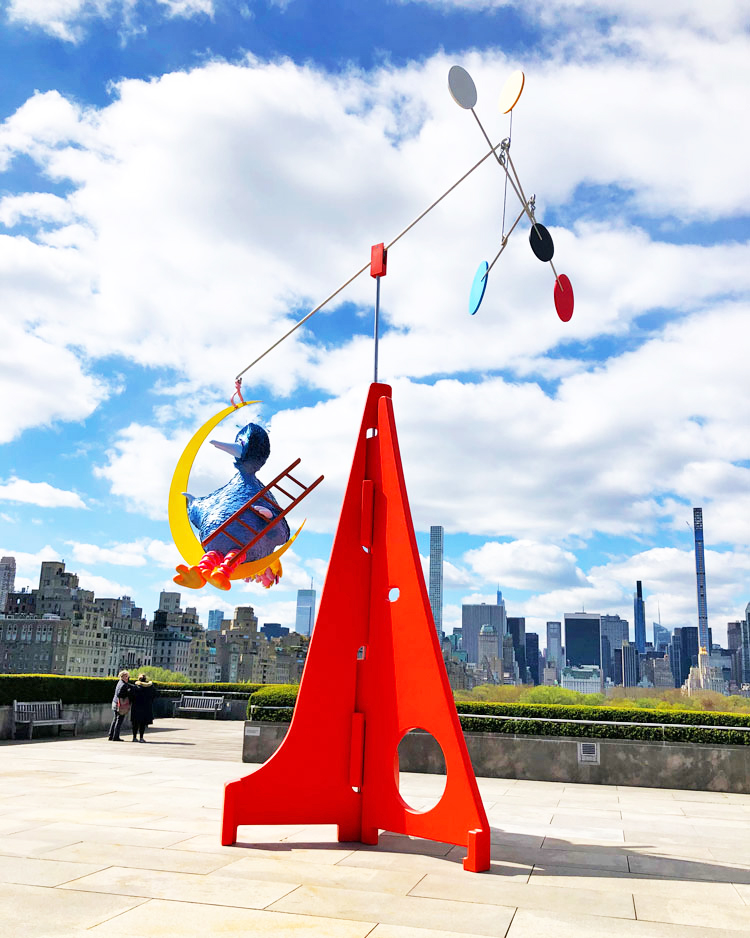 Held aloft by a purposively DIY version of an Alexander Calder mobile/stabile combo, one with a base that suggests a sort of launchpad or plastic preschool gym of the kind from which many a tot (and perhaps future astronaut) has fearlessly self-launched. The flight pattern is restricted, pre-determined by the rods that balance Big Bird on his sliver of moon against five metal discs, four twirling beneath an upright yolky circle. They suggest planets orbiting the sun, all interconnected, all activated by random air currents, going around and around. Big Bird may not know exactly where he is going but, nonetheless, forges ahead doggedly, so to speak, even if that trajectory is in circles, spurred onwards by a commendable curiosity married to an equally commendable apprehension. 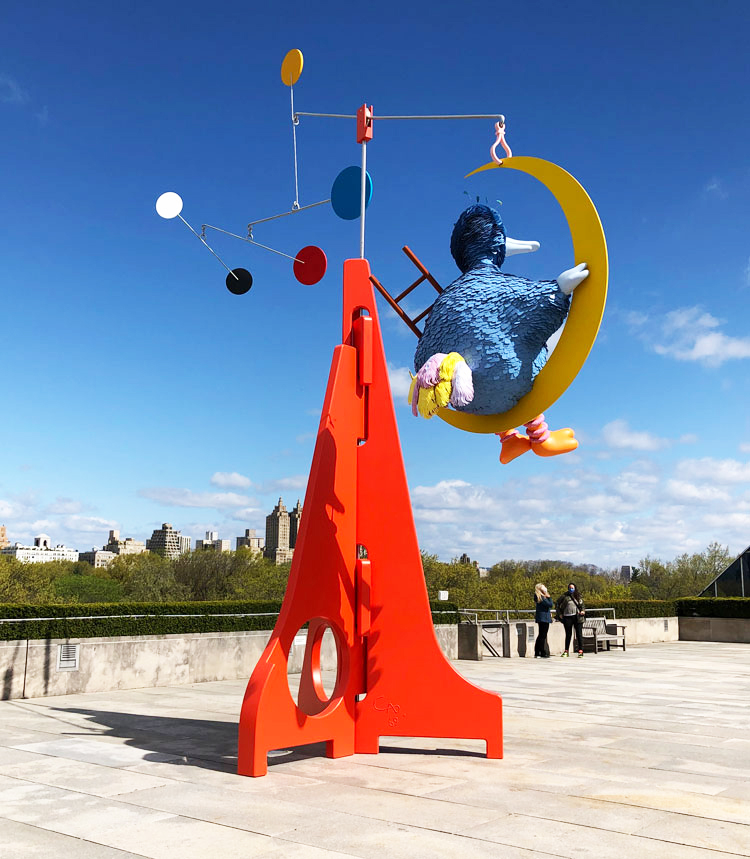 Made of stainless steel, aluminium and fibreglass, the installation is boldly coloured in Calderesque primaries that are slightly skewed – one disc more robin’s-egg blue and the base more maraschino cherry than a classic de Stijl blue or red, say, another instance of Da Corte making the familiar less so. The ensemble stands 26 feet (eight metres) high and this Big Bird seems to be roughly the same size as the original at just over 8 foot). But this avian is no softie, its feathers made from 7,000 laser-cut aluminium plaques (calculated by Sesame Street’s arithmomania-stricken Count?) to withstand outdoor exigencies. On its base is inscribed Da Corte’s version of Calder’s signature and the number 69. It refers to the year that Henson’s Muppets first appeared on Sesame Street, Apollo 11 landed on the moon, and what promised at the time to be a “giant leap” forward for “mankind,” as imagined by modernist idealists. This free-ranging, unpredictable, at times risky mashup of cultural icons, brand name logos, art history, history and more acts like imaginative detonations, firing up all sorts of little perceptual, critical fires.

The rather foreboding title, from an Italo Calvino short story about intergalactic travellers who roam the universe in search of a new planetary home, gives precedence to the sun, not the moon. After all, the fate of our corner of the cosmic neighbourhood depends entirely on the duration of the former. Da Corte deftly attaches Calvino’s quirky, often metaphysical musings on life and the space/time continuum as well as shelf loads of other science fiction and fabulist narratives to his installation’s themes, evoking the environmental, the existential, the eschatological, the playful, the tender and the woeful.
As Long as the Sun Lasts should draw crowds, enticed by Big Bird, to be sure, but also by an eagerness to be out and about once again, to see art in person, surrounded by the spectacular view of a greening Central Park framed by the crenellated Manhattan skyline. As New York and the world rebounds from more than a year of despair and uncertainty, we might all share the glee of a child whom I watched skip about the terrace, so happy to be outside under a blue sky, so happy to see his Sesame Street pal. And while we’re at it, we might remember a more familiar title: The Sun Also Rises – at least for now. 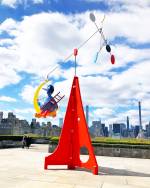 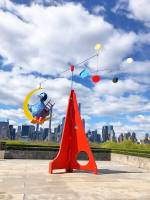