With AI seeping into all our lives, the Barbican should be congratulated for tackling such a prescient subject, and there are some real gems here. But has it missed a trick in making this a celebration rather than a critique of the technology that has such scope for abuse?

Very soon, artificial intelligence (AI) will probably be present in all aspects of our lives. But what is AI and how might art and culture relate to it? The Barbican’s new blockbuster exhibition AI: More than Human attempts to address the question “where do we end and where does it begin?” Here, AI is defined as “the endeavour to understand and recreate human intelligence using machines”. 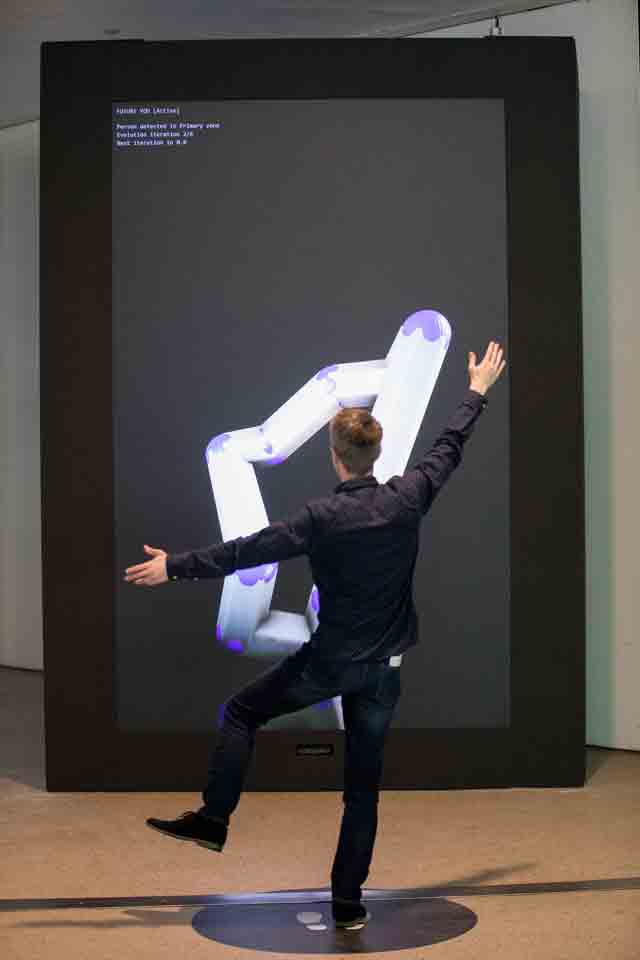 There is no doubt that this show is a timely one, as AI is rapidly becoming ubiquitous in our daily lives and is already beginning to dictate how we see the world. It is embedded in financial and communications systems, gene sequencing, surveillance, the military and weaponry, marketing, manufacturing robotics … the list could go on. If it is difficult to call AI one specific thing, then it is even more difficult to see it. So the challenges of mounting an exhibition on the subject are great. The show promises “an unprecedented survey of creative and scientific developments in artificial intelligence”, and what it does best is give a taster of a wide variety of objects, processes and ideas that could all come under the rubric AI, or origins thereof. However, at times, maybe because of this enormous remit, this large show can feel slightly incoherent.

The main portion of the show takes place in the Curve Gallery and it is certainly densely populated with a wide range of artefacts and ideas from the worlds of archaeology, popular culture, science and robotics, divided up under four headings: The Dream of AI, Mind Machines, Data Worlds and Endless Evolution, which attempt to break down this gargantuan undertaking. 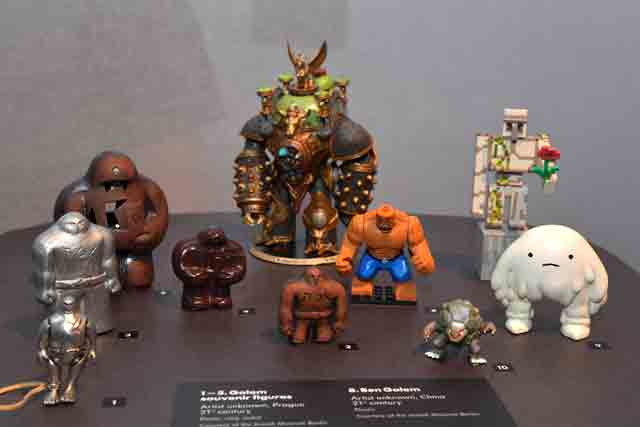 In what feels like quite a tight space, our senses are assaulted from the start with plastic souvenir models of the Golem, ancient Japanese Dogū clay sculptures and sci-fi film clips, all within the space of five minutes. This introduction is to set the history of how humans used religious beliefs to create an understanding of intelligence, but this thread only becomes more apparent when you read the catalogue. This all takes place in darkness. Why are technology shows always in the near pitch black? Surely a means could be found to display this stuff with a little more natural light? The black caption cards were hard to find and, having located them, I was not the only one struggling to read them. This might seem a minor point, but the variety of materials and objects on view means we move from an ancient alchemical treatise in digital facsimile to a robotic fish from the Massachusetts Institute of Technology in a few steps and it can be perplexing to know what it is one is seeing and to figure out why.

Having said that, I don’t know of anywhere else you can see an Egyptian painted plaster mask from the collection of Sigmund Freud, a Leibniz machine, a clip of Garry Kasparov battling Deep Blue, a 3D printed scaffold of an ear for use in regenerative medicine and an explanation of the I Ching all in one place. With the sheer number of sometimes seemingly disparate items and details, the show is a lot to take in. However, there are some real gems here. Coming across a letter and sonnet in Ada Lovelace’s own hand was an absolute delight.

In recent years, the Barbican has carved a niche for itself promising the interactivity of exhibitions. Here, a lot of the objects are backed up by screens playing video clips showing the item in use or touch screens inviting us to explore further. (Just one example: a replica model of Alan Turing’s Bombe machine is shown alongside a clip of Benedict Cumberbatch using it in the film The Imitation Game). Is it that today’s audience can or will not believe the physical object unless it is shown mediated through a screen? Finding a physical place for these screens in among the robots makes the show feel even more crowded and noisy. Perhaps this will be mitigated somewhat if the show travels to a more spacious site and greater room can be given between exhibits.

Most people think of robots first when they think of AI, and there are plenty here. It was Hiroshi Ishiguro’s impressive robot Alter 3 (in collaboration with Takashi Ikegami, 2019) that seemed, on my visit at least, to draw the most crowds. Its eerie silicone facial features and life-like jointed fingers captivated as it turned its head to me when I made a sound, and, despite some jerky movements, it held all viewers in its power. It reminded me of Edward Ihnatowicz’s hydraulic robot, The Senster, built at University College London and shown at the Evoluon in the Netherlands, in 1971.

The Senster used a tiny fraction of the computing power of Emard’s robot (and no machine learning or silicone) but, judging from surviving film footage, still managed to intrigue visitors, who found it hard to believe it wasn’t alive. Margaret Atwood writes in the catalogue about our enduring fascination with robots and asks if humans are really necessary.

I would like to have seen a more coherent art thread running through the show. The I Ching, for example, was a great influence on first-generation computer-art pioneers at the Slade School of Art in the 1970s, but none is shown here. AI is becoming an important method or material for artists now: the 2019 Prix Ars Electronica’s new Artificial Intelligence & Life Art category (won by Paul Vanouse) received 840 submissions; the Lumen Prize also has a category for AI; and, last month, the Serpentine showed its ambitious commission by Hito Steyerl, addressing issues of power in AI. 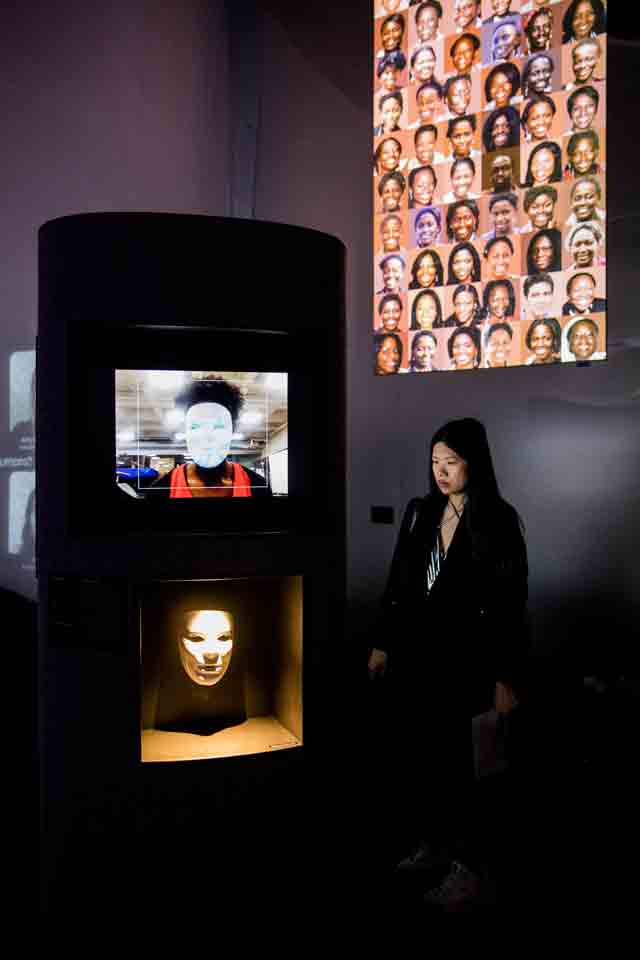 However, in the Barbican’s show there are some interesting works, mostly in video or animation. Of particular note are two pieces using machine learning in two different ways. The first is AI Ain’t I A Woman? (2018) by Joy Buolamwini, which, in a riff on Sojourner Truth’s famous anti-slavery speech, uses images of Michelle Obama, Oprah Winfrey and other prominent black women to prove that facial recognition software is downright wrong when it comes to identifying women of colour. That such software is biased really doesn’t (or shouldn’t) come as much surprise, but the material is presented in a clear manner, and not devoid of humour, which reminds us that you only get out of AI what you code in, prompting us to ask a wider question of who is doing the coding and, not least, why? This was the only exhibit confronting what must be a pervasive issue of racial bias in AI, although the catalogue does have essays developing this further. 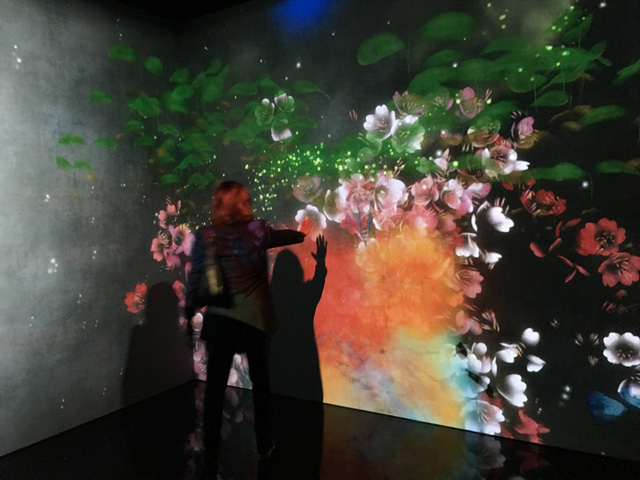 teamLab, What a Loving and Beautiful World. Photo: Catherine Mason.

The second notable work to use machine learning is downstairs, away from the main exhibition gallery. An interactive digital installation called What a Loving and Beautiful World (2011-19), it was created by an interdisciplinary group of artists, programmers, engineers, CG animators, mathematicians and architects known as teamLab, and is shown in its own spacious, darkened room. This immersive, ever-changing environment uses animation on all four walls populated with Chinese calligraphy. When touched by visitors’ shadows, explosions of flowers, trees and foliage are triggered, the patterns never repeating themselves. We are told that in traditional Japanese animist beliefs, nature and the artificial co-exist in harmony. In an age when climate change threatens us, might this be a glimpse of what could one day become our reality – an artificially created natural world? Notwithstanding this, teamLab’s work manages to be beautiful, something that is often missing from much contemporary art today, making this piece the best in the show for me.

A further selection of contemporary works, some specially commissioned, is dotted around the public areas of the centre where visitors coming to concerts, or other events in this multidisciplinary arts centre, can encounter them. These pieces are, in the main, interactive and seem to be popular, judging from the number and variety of people I saw engaging with them – mothers and small children, senior citizens, teens taking selfies, etc. These works seem more accessible as they can be encountered in bigger, more open and informal spaces and without buying a ticket.

In recent years, the Barbican Centre, in what must be the envy of many an institution, has established a system of creating exhibitions based on moving image and digital media, which have proved highly successful in touring internationally and, in so doing, reaping much needed funds for its continuing programme. The first, Game On (2002), together with its update, Game On 2.0 (2010), has now been to 37 cities and counting, and will arrive in Madrid later this year.

AI: More than Human is designed to be hired out and toured around the world: perhaps because of this, and in an attempt to attract potential future sponsors, the presentation is more of a technological celebration, rather than a critique. With the exception of Buolamwini’s piece, there is little critical engagement with the medium of AI by artists in the show. We are all too familiar with news stories of big data abuses. This exhibition does prompt us to consider highly important questions of human autonomy: data – its collection and end use, the coding of AI and by whom and, ultimately, the question of accountability. That AI algorithms are hidden from public view makes this even more urgent. And the Barbican should be congratulated in tackling such a difficult and prescient subject. There may not be any ready answers, but I would still have liked the questions to be more prominently addressed, and I think artists can play a major role in this. To be fair, many of these issues are raised in the accompanying catalogue, which contains some excellent essays written with the layperson in mind. It is a shame that a sponsor couldn’t have been found to bring the purchase price down from £29, as I think this really is essential reading to make full sense of the exhibition.

• AI: More than Human travels to Groningen in December 2019.