MVRDV is an office for urbanism and architecture based in Rotterdam, the Netherlands, founded by Winy Maas, Jacob van Rijs and Nathalie de Vries in 1991 after they won the first prize in the Berlin Europan Competition. They are well known for their research on density in the book 'FARMAX' that they published and for the Netherlands pavilion in the World Exposition 2000 held in Hanover. An exemplary example of their thoughts, they experimented with vertical stacking gardens where different zones are utilized for different tests. This compact model of a vertical garden demonstrated that technology and nature need not be mutually exclusive and attempted to find a possible solution for a lack of land and light.

The practice had recently completed their first built work in Japan - the Snow-Land Agrarian Culture Center in Matsudai town, Niigata. This facility is one of the three event spaces built for the Echigo-Tsumari Art Triennale 2003. Each designed by a different architect, the individual event space highlights the regional allure by concentrating on different themes. The Snow-Land Agrarian Culture Center focuses on the theme of agriculture and snow culture.

Niigata is a prefecture located on the Japan sea side of the island of Japan and is characterized by hot, humid summers and heavy snow falls in winter, sometimes piling up to a few meters high. The project is sited in the flat part of a valley and is located between the train line, the river and the high-voltage electric lines. It is a rural landscape with rice paddies and small houses where time seems to stand still. How to operate in this context and react to the climatic character is their preoccupation in this project.

Intermixing between a museum, a village centre, a classroom and a performance place, the building is an eye-catching white box that is lifted off the ground and supported by 3 tentacle-like corridor-bridges. In summer, the white box stands out from the green surrounding farmland. When winter comes, it in turn blends itself very well with the white snowscape. The square floor plan is crossed by the different movement patterns over the site. The different spaces of various sizes formed thereafter became the main spaces of the building, like gallery, shop, café etc. The path lines became the corridors of the building.

By lifting up the volume, MVRDV had created a column-less open-air space that can be used for events both in summer and winter, despite the heavy downpour and snow. Lifting-up also gives every room a panoramic view to the outside and in turn serves as a show window. Arriving out of structural needs, the jutting-out steel girders on the roof terrace that seem to emulate the surrounding mountainscape further rendered a distinct character to the Centre.

In sharp contrast to the snow-white exterior, the interior is a totally different world. The corridors are painted a contrasting dark, shiny grey colour. This grey hue forms an excellent background that presents the different rooms and work spaces, each in its own colour. There is the bright green shop, the orange toilets, the smooth blue café, the yellow administration office and the red staircase that leads to the roof top terrace.

MVRDV also collaborated with various artists in creating a series of spaces that is very unique and special. Each artist is given a specific space and colour to create their 'artwork'. Among the collaboration, Fabrice Hybert's "Autour du Feu, Dans le Desert" is the most well-received. His work is situated in a cylindrical room that he painted an intense dark green. On the wall of the room are 1001 small holes with lights mounted in it. A further circle is completed by placing a traditional Japanese hearth (a hibachi) in the center of the room. Small seats are arranged against the wall around the hearth. With the 1001 strong lights in the background, this space becomes the perfect spot for smokers taking a puff break. The smoke from the cigarettes, the sparks from the hearth and the 1001 lights conjured an interesting hybrid of the "Arabian Nights" tales and a traditional Japanese gathering space.

The Snow-Land Agrarian Culture Center is undoubtedly a memorable piece that leaves a positive impression on the visitors. Adopting a different approach to an otherwise conventional programme, it is a piece of work that seems to symbolize the renaissance of the region. Hopefully it will effectively serve the aim of mixing together different regions, generations and occupations as a community centre, as wished by the designers. 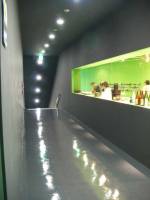 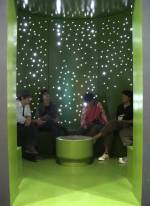