Yto Barrada: ‘The whole thing is a dance between a mad poet, children and ghosts’

Yto Barrada: ‘The whole thing is a dance between a mad poet, children and ghosts’

Yto Barrada discusses her new exhibition at the Barbican Centre, which draws on a calamitous earthquake and the remarkable text it prompted 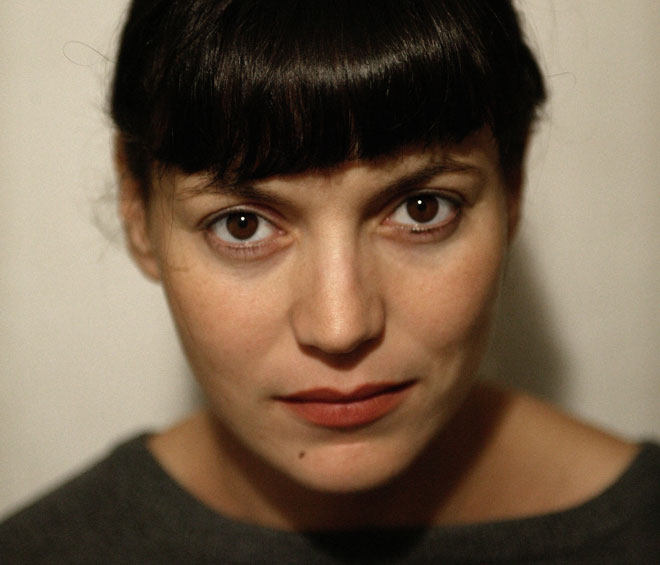 On 29 February 1960, at 23.40, an earthquake struck Agadir, a port town in central Morocco. Overnight, the historic core of the city was reduced to rubble. About 12,000 people – a third of the city’s population – lost their lives.

This story forms one of the starting points for Agadir, a new exhibition by Moroccan artist Yto Barrada (b1971, Paris) at the Barbican Centre’s Curve. Another is the aftermath of the crisis, where Agadir’s municipal buildings were rebuilt in glittering glass and concrete, transforming the resort town into a showcase for brutalist architecture. Yet another is the visionary poetic drama Agadir (1967) by Mohammed Khaïr-Eddine, the result of a government commission to report on the tragedy. 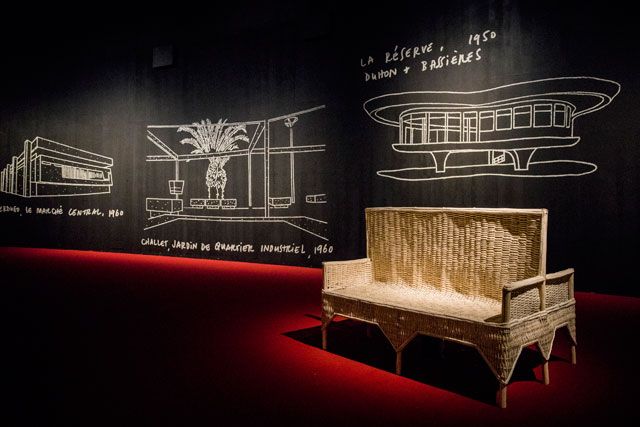 “I have to confess,” says the play’s semi-authorial narrator, “that I’m not looking for the truth … what matters: to reach conclusions that cohere.” Barrada’s Agadir has similar dimensions. It continues her engagement with history, psychoanalysis, urban space, postcolonial Morocco and the creation of myth, although it offers immediate pleasures alongside these heady themes. Curated by the Barbican’s Lotte Johnson, Agadir is both an exhibition of interrelated works and a cohesive whole.

Along the elliptical wall that gives the Curve its name, Barrada has placed blackboard-like sketches of the exuberant concrete-and-glass buildings that were erected in the earthquake’s aftermath. Facing them are a series of collages and a film work, while interactive installations take the form of wicker furniture. The play, translated into English for the first time, is performed by actors from the Guildhall School, who interact with the exhibition’s objects and walls; when they are not present, one can sit on the wicker chairs to activate recorded excerpts. And at the exhibition’s climax, there is an enormous mobile-like sculpture. It makes for a heady experience: disaster mixed with exuberance, the elemental with erudition.

Joe Lloyd: Agadiris an ambitious, multidisciplinary show. What drew you to the text? Was there a starting point?

Yto Barrada: I have many starting points! The Curve is a fantastic, strange space. I had a very receptive group of people, especially the curator Lotte [Johnson]. We tried a few routes, and we thought this one was the best. There’s this Moroccan book called Agadir, published in 1967, and only available in French. We looked for a translation and realised that one of the most famous Moroccan books had never been translated into English. North African studies and French literature are very popular in English and American universities, but Mohammed Khaïr-Eddie wasn’t known to anybody. The book and the earthquake and the reconstruction of the city, came together. 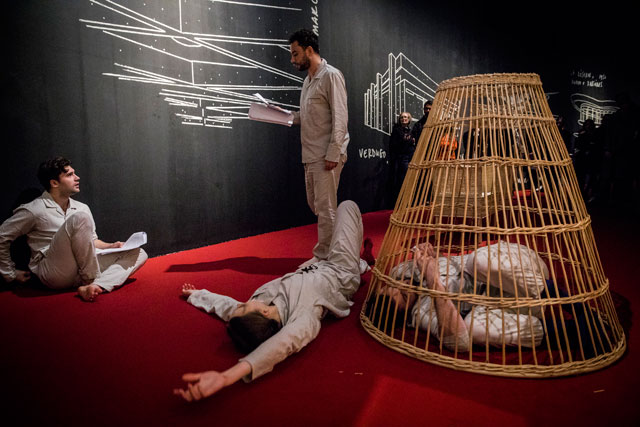 JL: What makes the text of Agadir so distinct?

YB: It was written six years after the earthquake. Khaïr-Eddie was commissioned by the government to write a report on the earthquake, but didn’t respect the brief. He came back with this crazy poem / novel / play, this hybrid, composite form. The conversations in it are the political and literary conversations of the 1960s. In one scene, he calls up different people from history, so you have a 12th-century king, a Renaissance ruler, a Berber queen of the seventh century … but you also have a modern-day unionist talking straight to the king’s face. And what was thrilling is that, when I shared it with Lotte, we found that it resonated so strongly with today.

JL: So, there elements of reportage blended with the poetry?

YB: Khaïr-Eddie was interested in oral history. The way he wrote, you can feel voices leap off the page. Which is why, for me, working with the Guildhall actors was quite incredible. This is not an easy text to read: it has no punctuation for five pages! And the text resists a lot. But when these fantastic actors started – and they knew nothing about the context – and impersonated the personages, all of a sudden it made incredible sense. When they were speaking and walking and dancing amidst the scratch drawings, the collages, the strange chairs, it all made sense. 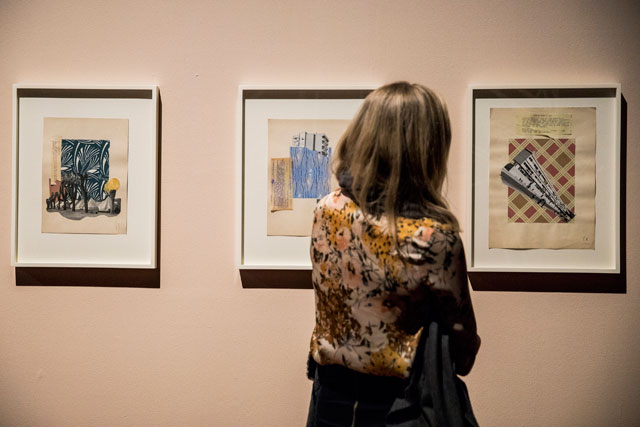 JL: I find it interesting that such a complex, modernist text emerged from an unambiguous disaster. Does the exhibition reflect that?

YB: It’s not a narrative text. And the whole walk through when you enter the Curve is non-narrative. There’s no order. Everything is dismembered. It’s about dislocation and reconstruction. I was interested in creating a space like the DreamBank at the University of California, where people record their dreams.

I mean, we’re talking about an event that wiped out a third of the population of what was, then, the Miami of Morocco, a big resort town. At the time, it felt like the Lisbon earthquake of 1755: a punishment, which came only four years after Moroccan independence. The city, this big modernist vitrine – the French were gone, but they stayed in a different way – was beautiful. And then, on 29 February at 23:40, most of the Muslim city was destroyed in an instant, at a scale that seems incredible. It’s the[Morocco’s?] biggest natural catastrophe. And Khaïr-Eddine uses it as a metaphor for the end of empires, the end of colonisation. Very quickly, you realise that the disaster he’s talking about is not only the earthquake. 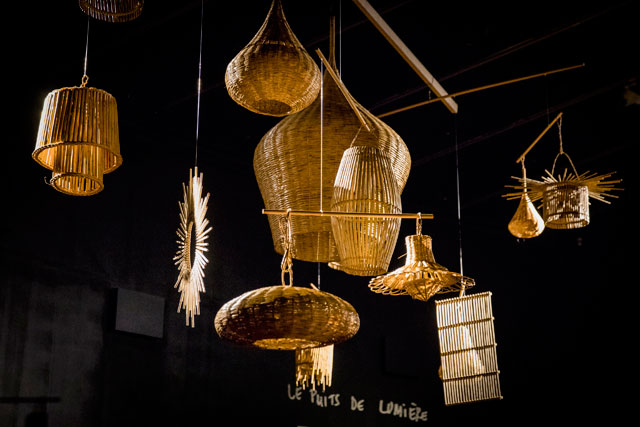 JL: How did you forge such tragedy into art?

YB: I had to find a way to deal, in this space, with the thousands of people who died, so I wanted to convey the sense of conversations with the dead – “What do we do now? Is it OK to build on top of you? Can you be part of our lives still?” And so I see the exhibition as a sort of danse macabre, which is the title of the last piece, the big mobile. It’s like a group of spirits, akin to the Tennessee Williams play Camino Real,where you have Lord Byron, Esmerelda [from Victor Hugo’s Notre Dame de Paris] and Don Quixote together.

There is archive footage of kids playing in the ruins after the earthquake, turning the vacant lots into playgrounds, so I had my children, who are now young adults, scratch the drawings on the wall. The whole thing is a dance between a mad poet, children and ghosts.

JL: The exhibition also contains a video work, Anagramme Agadir (2018), compiled from archive footage – an interesting intersection of the highly literary and the documentary.

YB: The video is all news footage. I wanted to edit it, but not too much. It’s witness discourse, but I took away all direct mention of the earthquake. So when they speak, you don’t know exactly what happened. I wanted it to be as far as possible from naturalism, so they talk as if they’re in a Chris Marker sci-fi film. They keep saying that they have said things, that they’ve heard things. I want the whole to feel like a René Clair surrealist film. 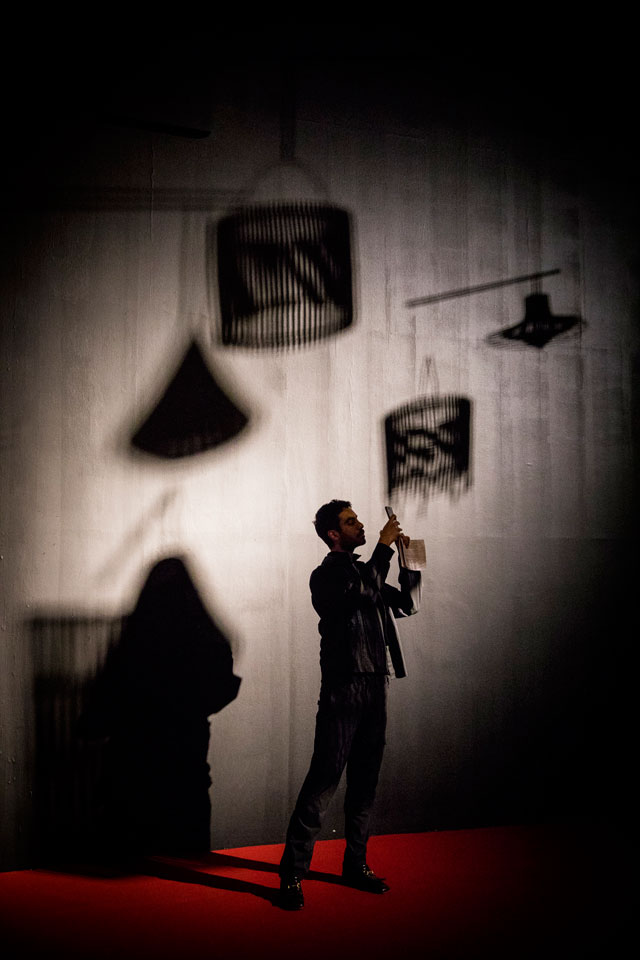 On many occasions, the interviewees cannot speak – instead, they make a wordless sound a “rrrrrrrr” or a “brrrrmm”. So I thought of Isidore Isou, the Lettrist who wrote poems with only vowels or consonants, and Dada poetry. And I added these sounds to the script for performance.

JL: What drew you to create furniture objects, such as the Conversation Chairs (2018), for the exhibition?

YB: It comes back to dreams, to the DreamBank. I read this sombre text on dreaming during the Third Reich [Charlotte Beradt’s The Third Reich of Dreams], and, in that, there are some dreams in which everyday objects, their lamps, pots and pans, became threatening. So I wanted to make objects strange enough that they feel transformed. If you look at the mobile, there are all sorts of objects – lamps, a bread-carrier, a mirror that doesn’t have a reflection. It’s an assemblage, a montage of things. And I think the shadows look like a very slow version of a Brion Gysin dream machine.

There are a lot of little references like that, but I hope that you don't need to know them in order to appreciate the work. I always try to be polysemic, but I also discover things that I didn’t intentionally do. There is wicker in the furniture, wicker in one of the collages and wicker in the film, and it just happened, it was just chance. And I think there’s something quite ghostly about the way all these coincidences just happened. There is a man in Agadir who is looking for his house. And then, as we were finishing the exhibition, a man came to see me to ask about a house he was looking for in Tangier. 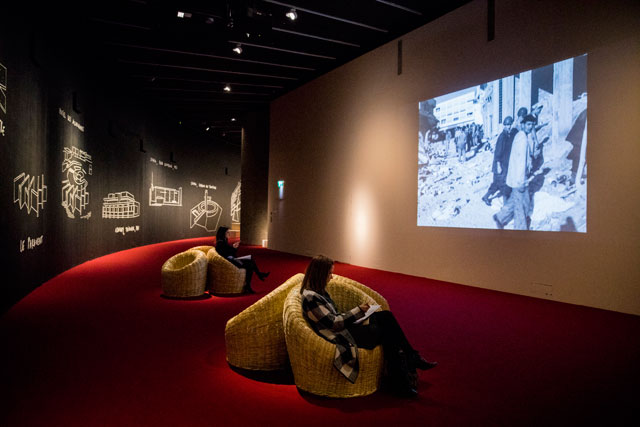 JL: The scratch drawings show the eclectic brutalist architecture of the rebuilt city. Why was this very European style chosen for the rebuilding?

YB: I think the vogue has something to do with the trauma. Brutalism is reassuringly solid. I think there’s something psychological in it. I can’t believe it’s a coincidence that it’s after the war, after the earthquake, that architects adopted the style. There’s something empathetic about it. And I believe that this solidity comes from the fragility of resistance. In recent years, there was been renewed interest in these buildings, helped by these great non-profit organisations Casamémoire and Mémoires des Architectes Moderne Marocains, which give guided tours.

JL: Your collages use quite beautiful patterns. From where did you draw them?

YB: They’re from a collection of mine, of gouache patterns for making wallpaper. And the photographs are press photos of the earthquake, which I collected from a flea market. I have tons of things that I get and keep for ages. And then one day, I open the box and say: “These are too beautiful. Let’s cut them.” 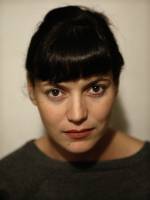