Into the Unknown: A Journey through Science Fiction

Into the Unknown: A Journey through Science Fiction

As we see from the Barbican’s science fiction exhibition, the genre has consistently looked to the future as a means to extrapolate and accentuate the hopes and fears of the present 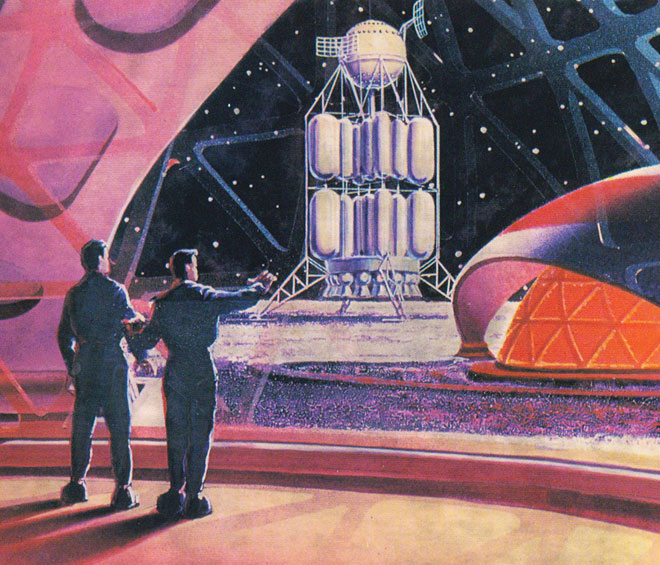 Into the Unknown: A Journey through Science Fiction exists on an inter-galactic scale, filling the Barbican’s astronomical dimensions. The Curve gallery houses the main show and a number of constellation exhibits are dotted around the rest of the building. In the Pit Theatre and the Barbican’s large reception area is a host of large-scale sculptural and film installations, as well as a “media pod” where the visitors can play cult sci-fi computer games, such as Half-Life.

What this exhibition boasts in breadth, it lacks in depth at times. The sheer volume of sci-fi knick-knackery has an overwhelmingly chaotic feel, making it difficult to give single objects focused consideration. This is not helped by the various film compilations interspersed throughout the Curve, which produce an incomprehensible blur of noise and image. In the opening section of the main exhibition, centred on the theme of Extraordinary Journeys, it is not clear what unifies the short clips of Journey to the Centre of the Earth (1959), Thunderbirds are Go (1966) and Jurassic Park (1993). That said, there are many fine things to be seen. Jules Verne’s original manuscripts and drawings are a treasure to behold and they form a pleasing tie to Jean-Marc Deschamps’ model of Nautilus (2002-5) – Captain Nemo’s legendary submarine from Verne’s Twenty Thousand Leagues Under the Sea (1870).

As visitors meander around the curve, like one of Saturn’s rings, they find the exhibition’s second instalment, Space Odysseys, which provides a healthy dose of nostalgia in the form of Darth Vader’s helmet from The Empire Strikes Back (1980) and the space suit worn by the late John Hurt in Alien (1979), but we also see the progressive, emancipatory potential of sci-fi and space travel.

Sixty-eight years before Neil Armstrong became the first human to set foot on the moon, HG Wells wrote The First Men in the Moon (1901). It was a time of bloody colonial conflict: in 1899 the Boer War began; there was fighting in Rhodesia; and, war raged between the US and Filipino nationalists (1900-1). It is the ruthless and self-righteous ideologies of British imperialism that Wells’s tale of moon travel satirises. When Bedford, the protagonist, arrives on the moon, and realises it is already inhabitant by Selenites, he declares: “We must annex this moon … This is part of the White Man’s Burden”,1 referencing a poem by Rudyard Kipling in which he calls on the west to civilise its non-white colonies.

Exploration, moon travel not excluded, is inextricably tied to colonial expansionism; conversely though, as Into the Unknown shows, it also presented a destination of hope for those attempting to break the bonds of colonial rule. Outside the parameters of the Curve, in the foyer, there is a screening of Frances Bodomo’s Afronauts (2014), a short film inspired by Zambia’s space programme. In 1964, the year Zambia gained independence from Britain, Edward Makuka Nkoloso founded the Zambia National Academy of Science, Space Research and Philosophy where he and his “afronauts”, as he called them, devised plans to put a black Zambian woman on the moon before any white man from Russia or America.

As symbolised in Bodomo’s film by the exploding rocket, Nkoloso was unable to get the necessary funding and failed to send an afronaut to the moon but he succeeded in setting astronomical aspirations for the newly formed Zambia, and he is rightly remembered as a visionary. Indeed, the afronauts programme defines the essence of science fiction; it is sometimes reductively identified as genre of outlandish, hypothetical futures but, in actuality, the future provides a means to extrapolate and exaggerate both the hopes and fears of the present.

The Barbican itself was created on hope. After the blitz, east London was a desolate wasteland of rubble. In 1955, a plan was proposed to build a postwar inner-city utopia. Over the following three decades a neighbourhood emerged of flats with balconies on which to grow flowers, open public spaces to get away from London’s traffic and to escape the drudge of work, and a centre for art, where Into the Unknown resides. As demonstrated by the show’s third part, Brave New Worlds, in science fiction, the strictures of existing social hierarchies are accentuated in the architectural division of cities – places co-inhabited in close proximity by rich and poor. For example, in Fritz Lang’s Metropolis (1927) we see a proletariat underclass labour in a sweated subterranean factory. Conversely, Mark Tildesley’s architectural drawings for the 2015 screen adaption of JG Ballard’s High Rise picture an absurdly tall apartment tower block, on top of which sits a lush lawn and veranda. The inclusion of these two films emphasise that, in cities, clean air and open space are afforded only to those at the top of the social (and architectural) hierarchy.

Final Frontiers, the last section of Into the Unknown, examines sci-fi’s attempts to transcend the limits of the body. Thinking of Men in Black II’s Serleena or DC Comics’ Catwoman, the genre has often explicitly eroticised female characters. Dara Birnbaum’s film Technology/Transformation: Wonder Woman (1978-9), showing in the final room, critiques the sexualisation of Wonder Woman in a TV series of the 1970s. Using original footage, Birnbaum loops the hero’s transformation from office dress to scantily clad sex symbol – what might be a display of heroism is actually one of erotic voyeurism. The closing exhibit of robotics presents a possible solution to the shackles of gender and body. Sonny from I, Robot (2004), TARS from Interstellar (2014) and the other model automatons from films plot the progressive obsolescence not only of divisions of gender but of humans altogether, pointing to a time where we are replaced by stronger, smarter, more durable artificial intelligence – a theoretical future known as technological singularity.

Despite that less than cheery end, this sci-fi exhibition is a wholly delightful nostalgia fest. However, while it is self-evidently important to situate sci-fi within a literary context, the many vitrines containing eye-catching covers ultimately frustrate because it is not possible to read them (although as a caveat, it is possible to listen to audiobook extracts). There is also too much packed into the Curve – as a result, some works have been hung so high that they are not illuminated by the spotlights. Admittedly though, Into the Unknown does cover a lot of ground; and, more than that, it succeeds in fleshing out the complex ways in which science fiction journeys back and forward between the future and present carrying our hopes and fears. 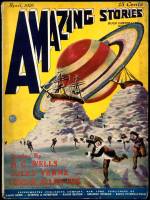 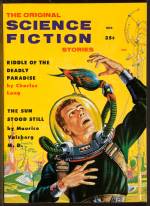