The Barbican’s craggy, pockmarked concrete walls provide the perfect setting for this rediscovery of art produced in the aftermath of war and trauma 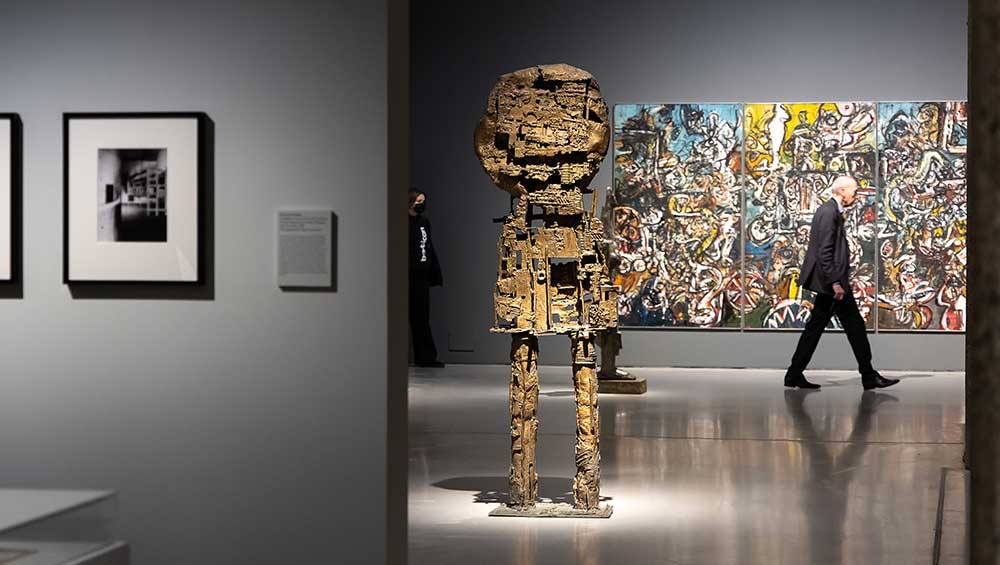 It would be hard to find a more appropriate building in London in which to showcase this survey of postwar art: the brutalist edifices of the Barbican emerged from a second world war bomb site, changing what the British thought modern housing and neighbourhoods might look like, even if there were more people who resisted than embraced that idea at the time.

“Rough poetry” is the phrase that architects Alison and Peter Smithson coined to describe the ethos of brutalism, and there is plenty of rough poetry here, among the 48 artists and about 200 works. As if the war had not already caused unimaginable loss and trauma, as the introduction to the show points out, there were 20 more years of “dislocation, conflict and upheaval” to come. There was precious little time to process the huge relief that the war against Hitler had been won, given the very real threat of nuclear annihilation, the escalation of the cold war, the disintegration of Europe’s colonial strongholds, and the arrival – by invitation and emigration – of hundreds of thousands of new British citizens, either summoned to help in the nation’s rebuilding, or seeking refuge from Nazi atrocities. It is out of these multiple disruptions in the perceived order of things – including the call for a new spirit of liberty and equality - that this show’s art emerged. 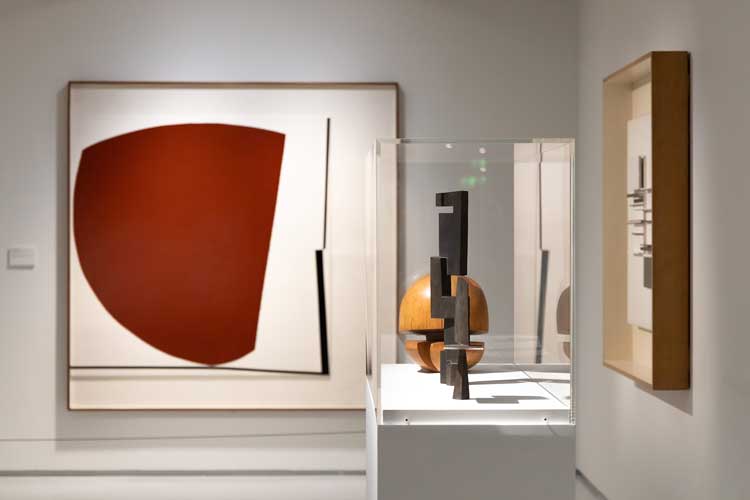 What is exciting about this show is that its thematic arrangement allows for a far more expansive overview, dipping in and out of various distinctive artistic schools or groups of the time, with less concern for what is abstract or figurative and more interest in what the art itself reveals. There is also a refreshing mix of expected and unexpected talents – especially many female artists, whose practices have, until now, been woefully overlooked - and all of them justify their place. 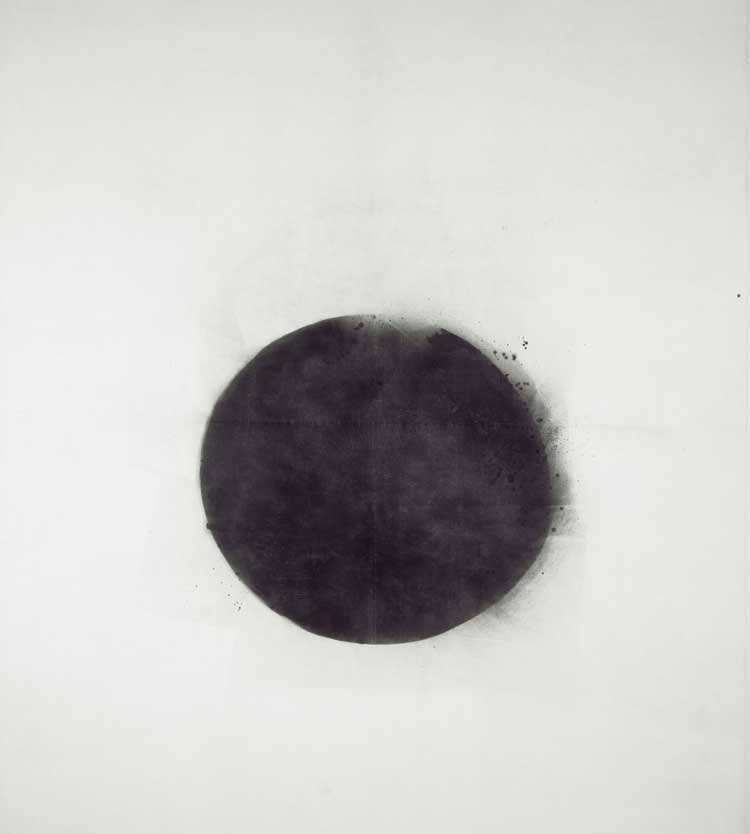 The Barbican galleries, characterised by craggy concrete walls and columns, are gloomy at the best of times, but this gloom and grit is used to great effect here, especially in the opening room: John Latham’s Full Stop (1961) – a giant black circle, like an enormous bullet-hole, its edges smeared and fraying, against a foggy white background – is given the whole of the facing wall. United under the theme Body and Cosmos, Latham, Eduardo Paolozzi and Francis Newton Souza have this room to themselves, a trio chosen partly because of their unique and shared viewpoints as migrants or the sons of migrants, having lost family or nations to war or colonial atrocities, but also for the undeniable alchemy of their combined aesthetics and subject matter. Human frailty and post-traumatic stress are writ large in a trio of Paolozzi’s monochrome Heads, all in various stages of nervous disarray and disintegration, while Souza’s three bleak, graphic portraits, including The Agony of Christ (1958), conjure something very dark at the heart of our cultural and religious institutions, painted with all the conviction Souza had at his fingertips, having witnessed enormous abuses of power while growing up in Portuguese-administered Goa and British colonial India. Latham’s Full Stop seems to question our place in the cosmos as well as the future of our species. 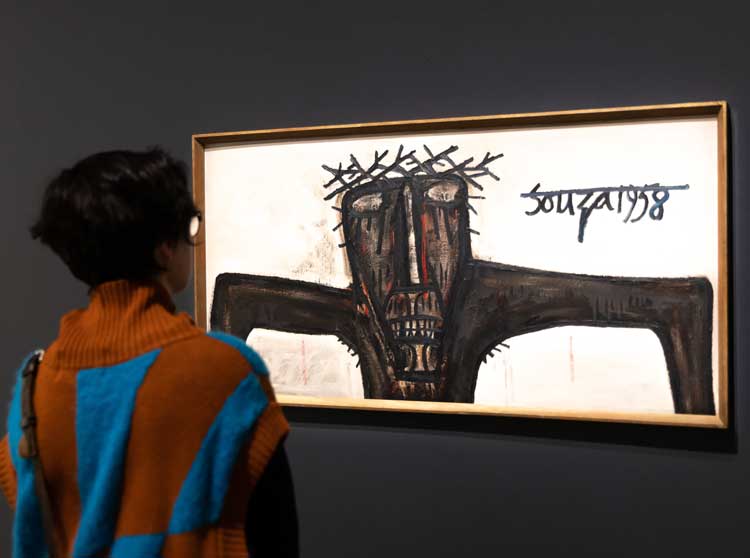 A room that is more gently ruminative, but just as viscerally rich, follows, themed Post-Atomic Garden. Mutant beasts, plants and playgrounds abound, including Lynn Chadwick’s The Fisheater (1951), which takes centre stage, with Paolozzi’s bronze statues-cum-cybermen standing guard nearby. Shifting to a lighter tone, we have Bert Hardy’s black-and-white photos of Birmingham bomb sites, which reveal these rubble-strewn urban acres as spaces of enquiry and playful exploration. Displayed next to three William Turnbull bronze relief sculptures, they could be representations of the same, debris-strewn wastelands-cum-adventure playgrounds. 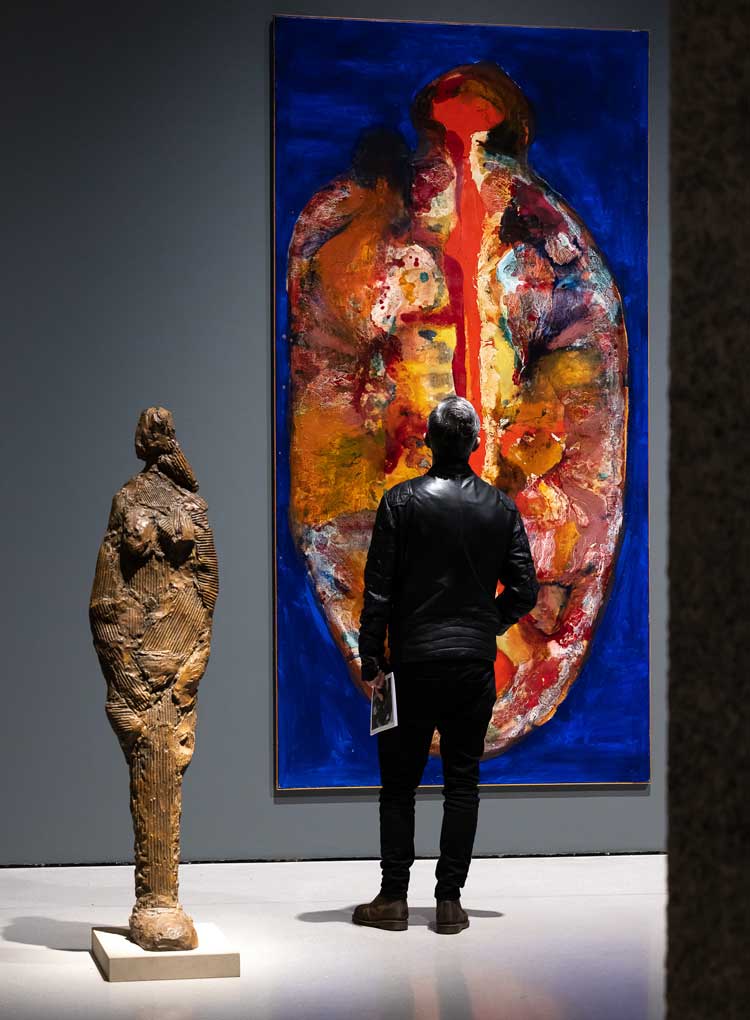 In this and the adjacent double-height room, titled Strange Universe, there is a really satisfying balance of twisted, contorted metal sculptures – such as Elisabeth Frink’s menacing Harbinger Bird (1961) – and richly coloured, large-scale paintings. Especially lush are two from the Hungarian Jewish artist Magda Cordell – at the time a key member of the Independent group, along with Paolozzi and Turnbull – who fled Nazi persecution and settled in the UK after the war. Her paintings somehow speak of evisceration and also rebirth. 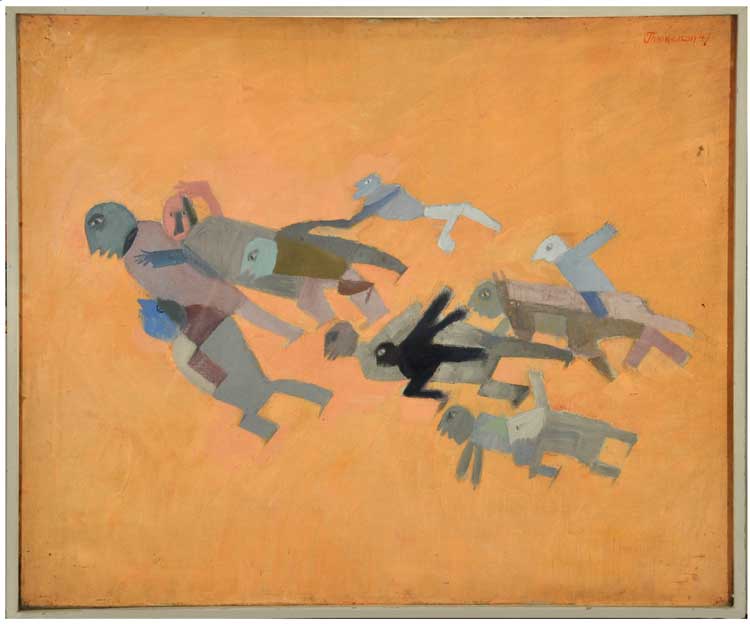 There are also four gloriously vivid, witty and acerbic, or plain wistful paintings by the Polish émigré Franciszka Themerson (see Studio International’s recent interview with her niece, Jasia Reichardt, on the newly published Themerson archive catalogue), including Eleven Persons and One Donkey Moving Forwards (1947). These humane, sympathetic paintings jar nicely with two disturbing, distended and collapsing heads by Peter King, Untitled (Head of a Woman) and Untitled (Head), both c1957, rendered in coloured paint mixed into cement, and made in the last year of King’s short life; he died of sepsis aged 29. 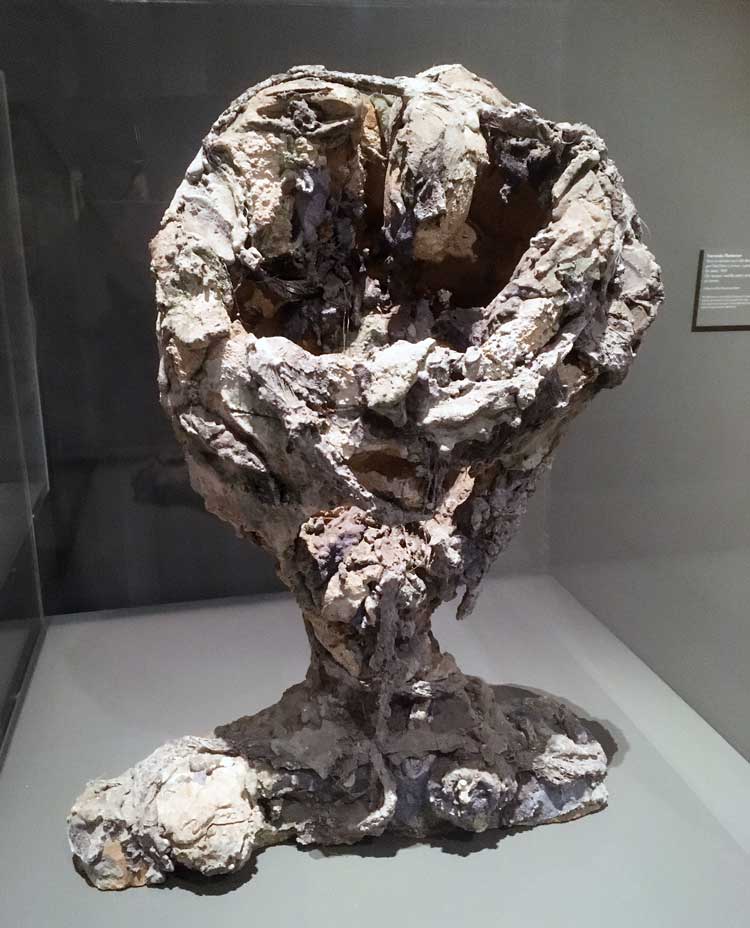 There are so many discoveries on this lower floor of the Barbican’s two-storey exhibition space. Tucked into the smaller rooms along the back there is a poignant meditation on the strictures of mid-century marriage in the room themed Jean and John, after its artist occupants and clearly conflicted cohabitants, Jean Cooke and John Bratby. The reconstruction of postwar Britain famously brought a de-emancipation of women – so many of whom had stepped successfully into absent male shoes, playing vital roles in manufacturing and transport – arguing for a return to “traditional” family life, with women playing a strictly supporting servile role. Cooke and Bratby were married for nearly 25 years, but clearly not happily: Bratby, apparently jealous of his wife’s talent, destroyed many of her works. One of his paintings places Jean’s hunched, naked body - her face staring at us with a calm, questioning gaze - at the rear of a kitchen table that is groaning with discarded packages and vessels for food and drink; her vivid presence is almost eclipsed by domestic drudgery. It could be hailed as the poster image for toxic 20th-century masculinity, but the clarity and grace of her own portraits – of herself and her husband – give her the last laugh. 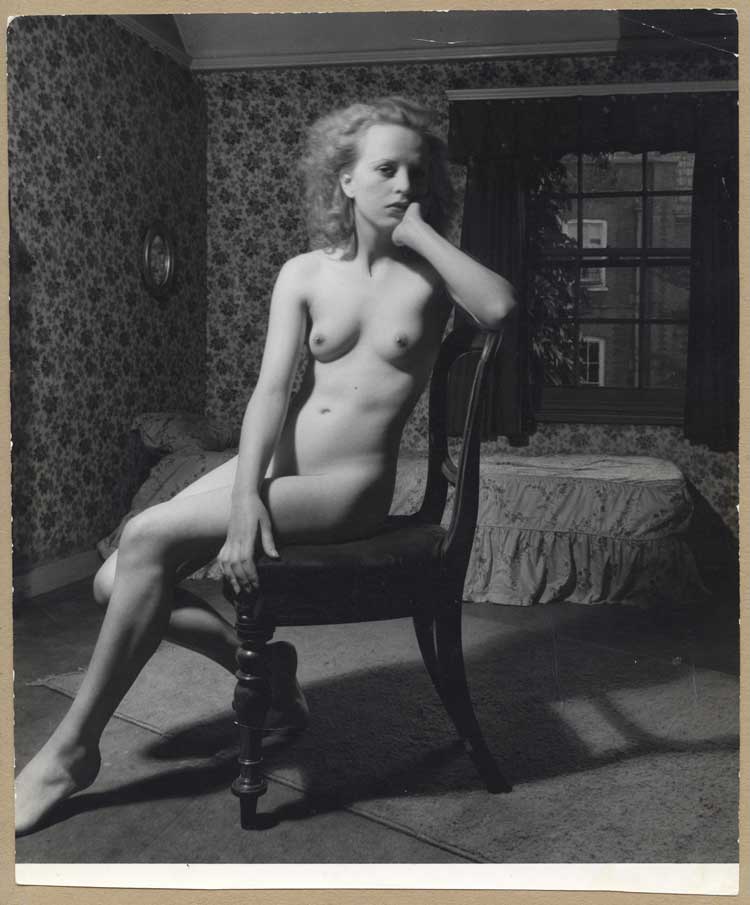 As a contrast to stifling domesticity, the adjacent gallery, titled Intimacy and Aura, explores the era’s more unorthodox adventures in the quest for meaning through relationships. An obvious choice is Lucian Freud, calmly dissecting the surface textures of his former wives, Kitty Garman and Caroline Blackwood, through his dispassionate portraits; so far so familiar. But there are gothic treasures in the oppressive, dimly lit Victorian atmospheres and glowing white nudes by Bill Brandt (taken for the first time with a turn-of-the-century Kodak camera); they are haunting, hostile and strange. Unusual – for the time - but lush and luminous are two portraits by Sylvia Sleigh, of her lover, the art critic Lawrence Alloway, who is dressed up as Sleigh’s “bride” in sumptuous frocks, wigs and settings. They were deemed far too controversial to exhibit at the time but seem utterly of the moment now. 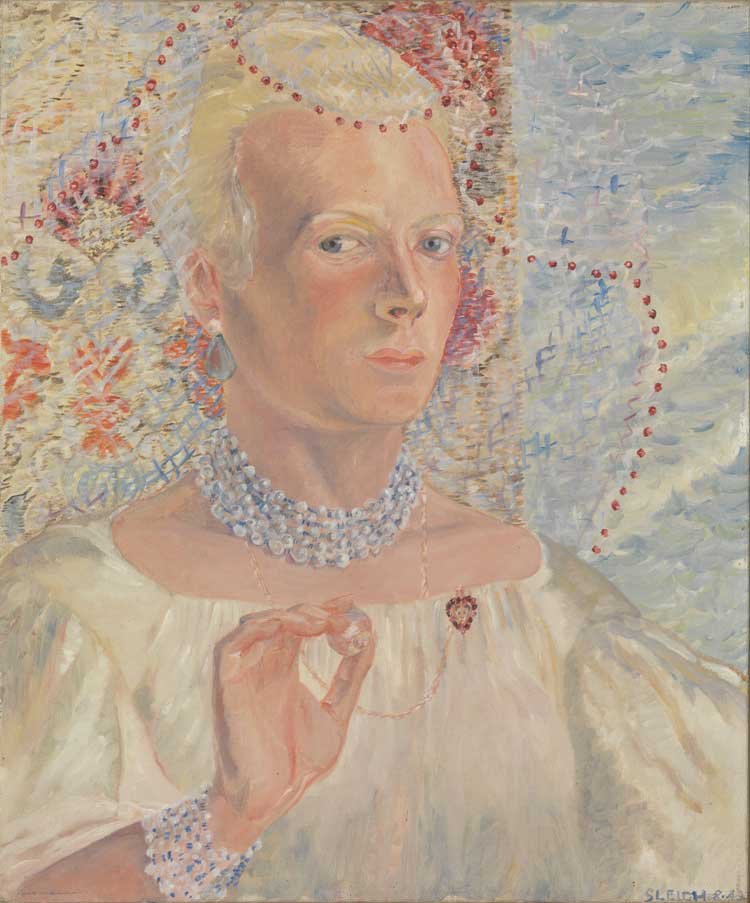 Probably the least persuasive and interesting space is the adjacent gallery, dedicated to modern homes, with a Richard Hamilton painting, some Paolozzi collages and a slender stage set with a single chair evoking (but thinly) Peter and Alison Smithson’s radical House of the Future, designed for the 1956 Daily Mail Ideal Home Exhibition.

Up the stairs of this monumental modernist interior, all geometric lines and pockmarked concrete, the Scars themed room is particularly powerful, filled with earth-toned, ruined landscapes by Frank Auerbach and Leon Kossoff, as well as Gustav Metzger’s “disintegrations”. 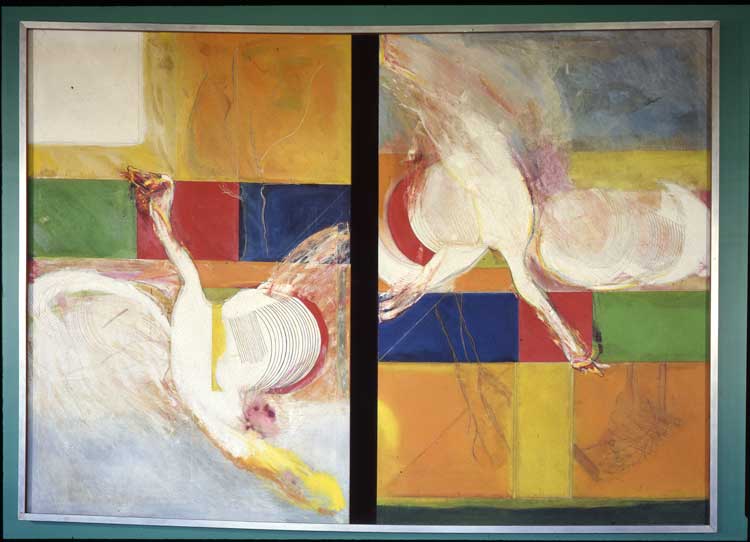 A moment of light and geometric delight follows, with a small (too small) showing of the pioneers of concrete, or constructivist, art – Victor Pasmore, Mary Martin, Robert Adams and others, intent on “understanding and replicating the essence of beauty through the study of science and mathematics”, as the excellent accompanying leaflet puts it, also recognising that, while born of a desire for rationality, it still evinced the “slightly wonky sensibility” found in British art at the time – an enduring characteristic, surely. 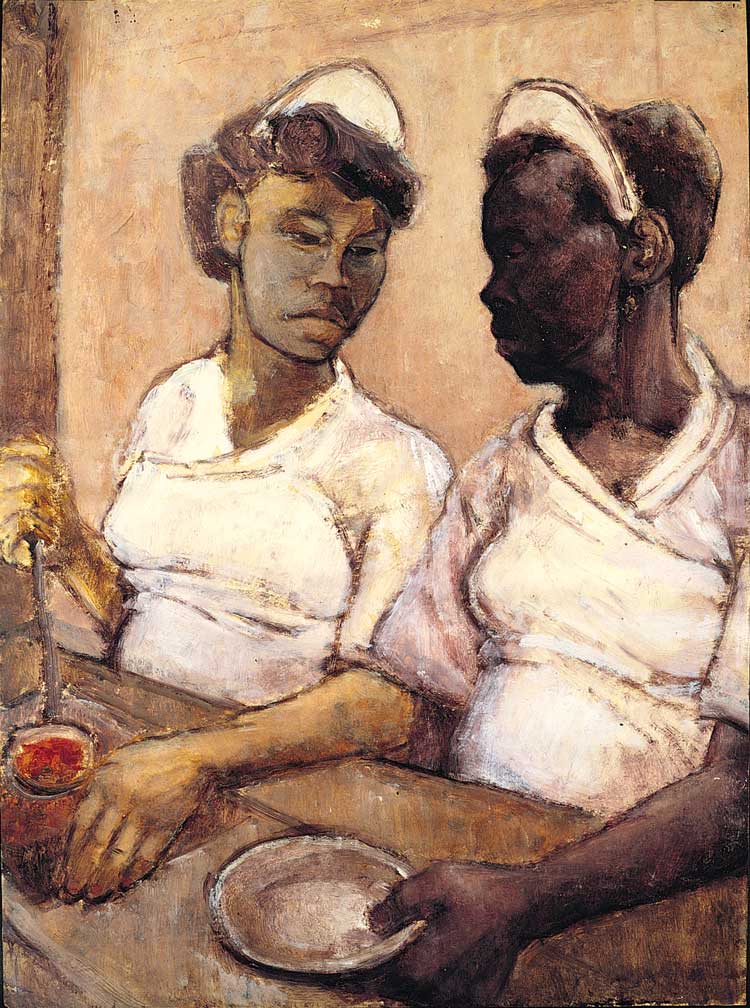 The rest of the show becomes somewhat fragmented, a scattering of street scenes, photos and graphic prints that celebrate graffiti and a spirit of punk and can-do, in Choreography of the Street (highlights are Roger Mayne’s and Nigel Henderson’s photos of children playing in the street). There is a moving tribute to two artists whose work recognises the struggles of women to maintain families and community in the face of poverty and displacement, in the form of Eva Frankfurther’s paintings and Shirley Baker’s photos that celebrate moments of everyday beauty in the lives of the marginalised. Frances Bacon’s fragmented, tortured figures might be an obvious inclusion, given the topic, but it is interesting that the curators have decided to show three of his more sombre, less grotesque Man in Blue paintings (1954), depicting an unidentified man in a dark, bar-like setting, who may or may not have been a lover. Also outing his – at the time – transgressive tastes, but with more bravado, is David Hockney, in the graffiti-inspired My Brother is Only Seventeen (1962). 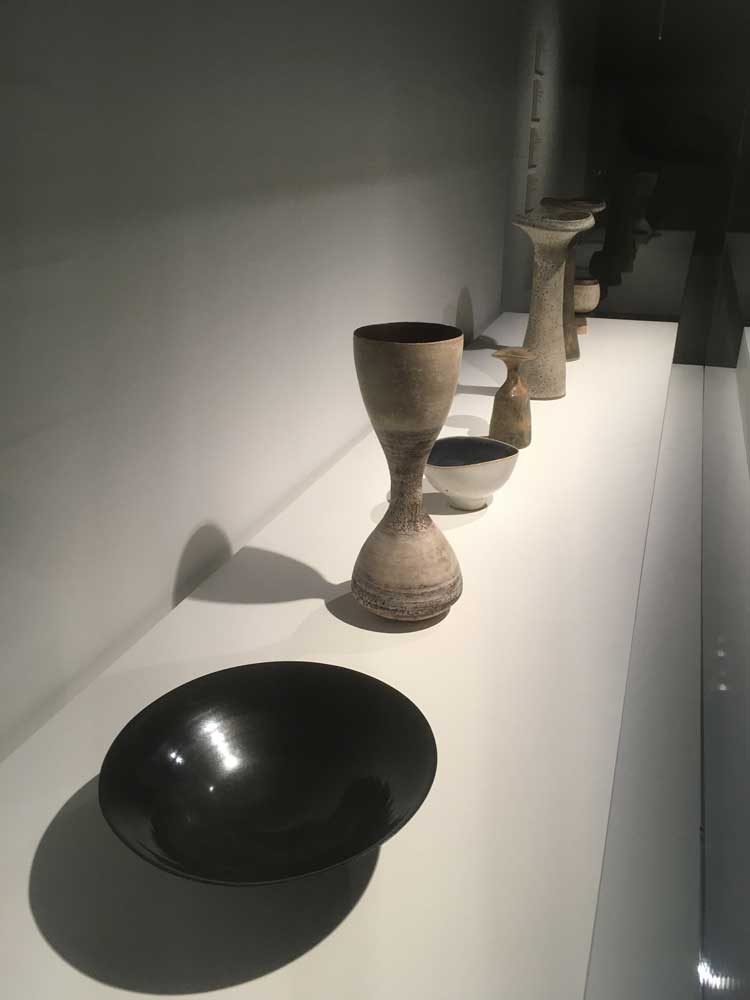 There follows a display of spectral, simple vessels by Lucie Rie and her protege Hans Coper, both of whom fled to the UK to escape the horrors of Nazi occupation – and perhaps that spirit of sanctuary but also the many absences in their lives is present in these pale, richly textured creations, which changed the course of British ceramics for ever. We conclude with a joyous shift to colour in painting, with the rich layerings of Patrick Heron, the almost textile weave of Anwar Jalal Shemza, and Gillian Ayres’ glorious splashes and streaks, plus Big Bird (1965), an early work combining abstract and figurative elements by Frank Bowling, but with all the extraordinary chromatic intensity we have come to expect. It’s an optimistic note on which to end – and, heaven knows, we should be thankful for that. 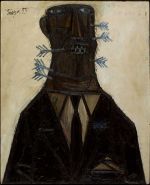 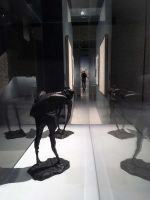