Youth and Beauty: Art of the American Twenties

Youth and Beauty: Art of the American Twenties

It is almost impossible to separate the decade of the 1920s in America from the Jazz Age spectacle found in the stories of F. Scott Fitzgerald, a social scene celebrating opulence, wealth and sexuality, populated by young flappers with cropped hair and dapper gents in seersucker suits sipping on mint juleps, dancing the Charleston in shiny new shoes. Culturally these boom years are also tied to both a celebration of industry and steel, as seen in the Precisionist cityscapes of Charles Sheeler, and the flowering of African American cultural in the Harlem Renaissance.

It is a period that can be seen to have offered the promise of the American Dream fulfilled, a world full of greater freedom and economic progress. While all of these things are found in the exhibition Youth and Beauty: Art of the American Twenties, currently on view at the Brooklyn Museum, before travelling to Dallas and Cleveland, the introduction to the catalogue accompanying the show begins with a quote on realism from Willa Cather’s story The Novel Démeublé (1922). Although Cather won the Pulitzer Prize in 1922, her writing focuses on a parallel section of the American experience, farm life on the prairie frontier. It is often easy to forget that while most cultural studies on this period focus on the “Roaring Twenties” found in the cities, the vast majority of the United States was still dependent of the rural farming economy. The quote from Cather is a perfect counterbalance to our assumptions on the decade and a clever introduction to an exhibition that examines the artistic output of the Twenties with an even hand, incorporating the Jazz Age of Fitzgerald and the celebration of the American landscape of Cather.

The exhibition includes 138 paintings, sculptures and photographs by 67 artists produced between 1920 and 1929, a decade marked by the aftermath of the first world war and the onset of the Great Depression. While previous studies and exhibitions on the art of this decade have chosen to focus either on the rarer, Cubist inspired abstraction found in the Precisionist movement or to focus on the oeuvre of single artists, such as Edward Hopper, the current exhibition provides a more complete artistic survey of the decade as a whole. Much like their contemporaries in Europe, several American artists in the 1920s returned to a more realist, or even “classical” style, a fact until recently often sidestepped by canonical modernist histories, which have chosen to promote a neat trajectory of abstraction. The exhibition thus offers a much more complex view of this decade, and includes surprising works by artists whose output we thought we knew so well.

The first of the exhibition’s two thematic sections, Body Language. Liberation and Restraint in Twenties Figuration, investigates the realist portrait, naturally erotic figure subjects and heroic types. In the 1920s, healthy body culture, and its celebration in art, was seen as a part of the post-war recuperative effort, whose scientific consideration of the body’s machinelike capacity for perfection was regarded by extension as having the potential to improve society as a whole. While this interpretation matches sentiments found in the return to realism in European art at the time, much American work drew inspiration more from contemporary native culture than from the past, in contrast to the European “call to order”. For example, while Joseph Stella’s nudes of the twenties are partially inspired by the art of his native Italy, which he revisited at the time, contemporary American ideals of cleanliness and the visual language of advertising are equally as important. Works such as Joseph Stella’s The Birth of Venus (1925) may take their subject matter from ancient mythology, but the svelte, sensual, nude female form of the Venus embodies the ideal modern “sanitized” female, free from excess hair and blemish. Furthermore the Venus’s pose, with her arms raised above her head, mirrors numerous poses found in advertisements for cold creams, safety razors and even underwear.

However the female body was not only seen as an allegory of “sanitized” perfection, but also was explored as a sexual one. This duality of the female body is expressed most eloquently in George Bellow’s rare female double portrait, Two Women (1924). An homage to Titian’s Sacred and Profane Love (1515; Galleria Borghese, Rome) in which two figures, one richly dressed (read worldly love, debased by material trappings) sits opposite an unclothed female (read pure love, embodied by a natural ideal). Set in the parlor of Bellow’s rural Woodstock, New York home, Two Woman could simply be read through Titan’s original, but it is equally possible to interpret the painting through Freud, and to see the two females as vying impulses of sexual openness. While Freud was widely publicised throughout the 1920s in the popular press, Americans were rarely expert or accurate in their understanding of his ideas. By nesting his allegory of physical love in within a domestic interior, Bellows may be suggesting the most acceptable resolution to the conflict between sexual desires.

The exhibition’s second theme, Silent Picture: reckoning with a New Word, explores subjects as diverse as still life and industrial and natural landscape, while highlighting their shared qualities of compositional refinement and muted expression. While the new liberated man and the sexualized body was central to the beginning of the exhibition, what is most striking about the majority of cityscapes from the decade is the absence of people, which is in stark contact to earlier American traditions. Although Stella’s multiple Precisionist paintings of the Brooklyn bridge from circa 1928–29 can be read, like many other depictions of the bridge, as celebrations of modern engineering, the lack of the human figure gives a sense of alienation within the quickly changing present, providing a more complex reading.

While an interest in formal clarity and order is often read in the Precisionist cityscape, it is also evident in photographs that were popular in advertising in 1920s, particularly for modern industrial wonders, such as automobiles and airplanes. This visual clarity in advertising is also evident in the direct painting style of Elise Driggs in her painting of the Tri-Motor airplane of 1928, which bears an uncanny resemblance to the images used in Ford’s 1928 advertisement titled Through the Night in which the Tri-Motor pane appears aloft and in strict profile.

A final aspect explored in the exhibition is the rural experience, which in contrast to the metropolis, is idealised in the 1920s as more pure and clean. In John Steuart Curry’s painting, The Bathers, three majestic male nudes bath within an idyllic natural landscape. Here the realist landscape reveals not only a desire to embrace a purely “American” history, one not tainted by European influences, but also a more complex conflation of human and plant life. Curry’s painting, for example, calls to mind analogies made by eugenics advocates between human bodies and livestock. This image is on one level an allegory of three stages of life; it is also an exultation of physical perfection and racial and genetic homogeneity. Are the men pictured bathing just so as to reveal the majesty of their bodies or is it an allegory of a gene pool? While the popularity of eugenics in the 1920s has become a somewhat taboo topic for fear of drawing links to Nazism’s interpretation of eugenics, it is impossible to deny the prevalence of these ideas within America at the time. It is by opening up the discussion of the art in the 1920s to allow for both contradictions and areas of influence, such as eugenics, which historians have often overlooked, that this exhibition finds its strength. In the deft hands of the curators, the 1920s is proven to be more complex than we often assume and as intriguing as ever. 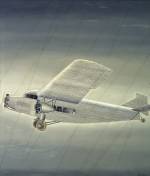 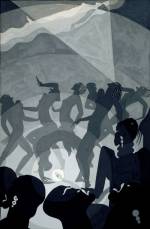