A new international quadrennial across Leeds and Wakefield opens with an introspective first edition, which finds the sculptural in some surprising places 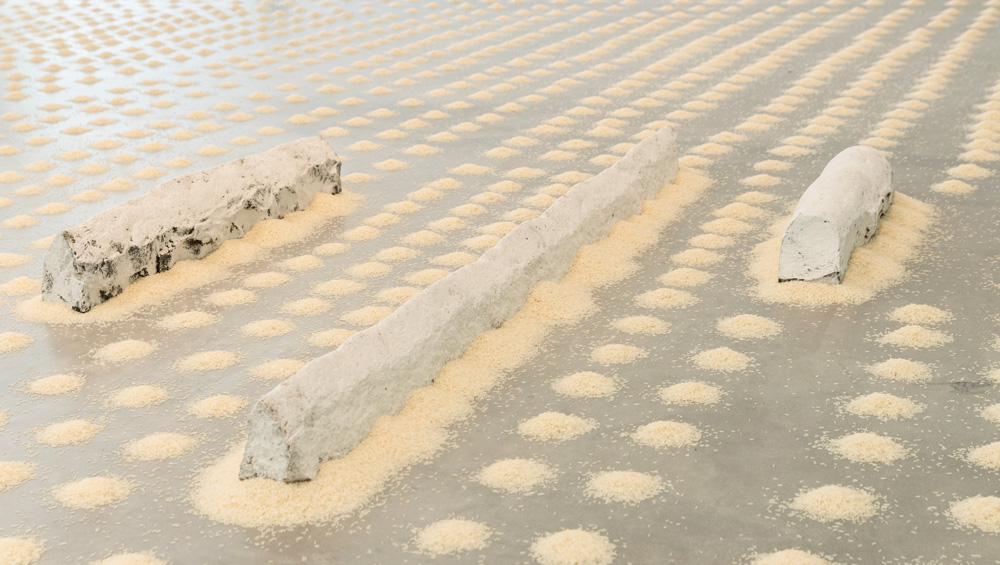 What does it meant to be a sculptor today? Ever since the modernists moved away from mallet and chisel, the purview of sculpture has become so broad as to be ungraspable. At 2017’s tremendous Skulptur Projeckte Münster – the 10-yearly city-wide exhibition that has acquired a canon-forming function in contemporary sculpture – visitors could encounter video art, performance, documentation of social experiments, digitally generated simulations, works playing with light and sound and, courtesy of Pierre Hugyhe, a vast artificial landscape. Though there was space for the carved and the cast, they felt very much like a single seam in an elaborate brocade. If sculpture can be all these things, what exactly distinguishes a sculptor?

The first edition of the Yorkshire Sculpture International (YSI) does little to clear this up. At the Hepworth Wakefield, German artist Wolfgang Laib has covered a large floor in little mounds of fragrant rice, broken up now and then by pretty stones. When I visit, he is still slowly doling out the grains, and I feel as if I have stumbled uninvited into a personal meditative exercise. Close by, in a converted mill, the Lebanese composer Tarek Atoui has built a series of ad-hoc musical instruments, including one contraption made from vacuum-cleaner-like pipes and a desktop fan. 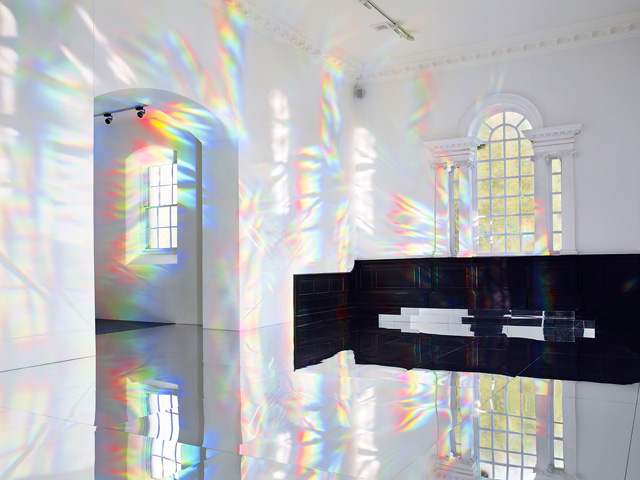 At Yorkshire Sculpture Park (YSP), Korean artist Kimsooja has coated the floor of the former estate chapel in mirrors and placed diffraction film on the window to create the illusion of bouncing spectrums; although nothing we haven’t seen from the artist before, there is fun to be had bathing in the reflections. 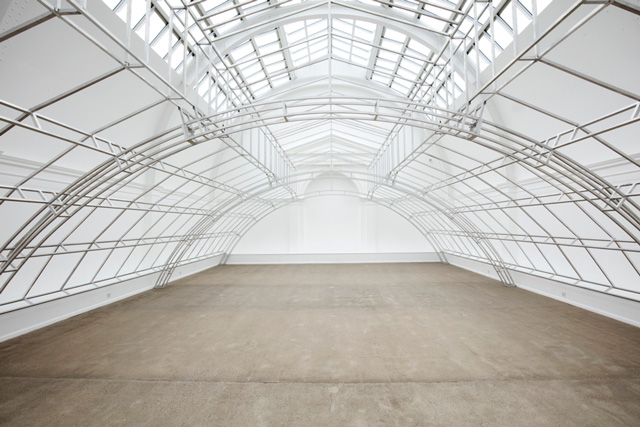 Over at Leeds Art Gallery, Turkey’s Ayşe Erkmen has installed an architectural model-like imitation of the building’s recently revealed Victorian barrel-vaulted ceiling to oddly mesmerising affect, while, next door, at the Henry Moore Institute, Maria Loboda has, for reasons that admittedly elude me, placed preserved insects in alabaster lamps. 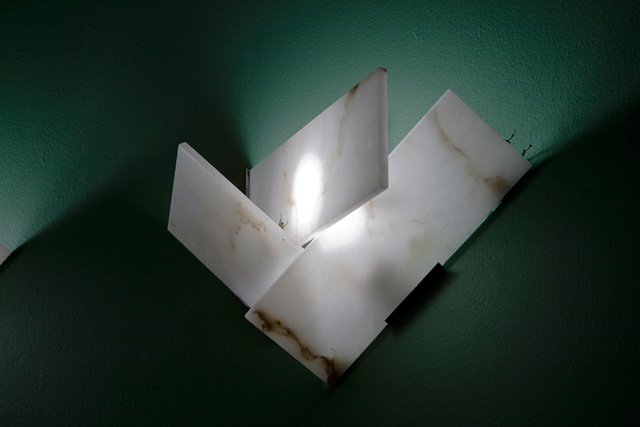 All of which is to say that the YSI is something of an assorted pack, in terms of quality, genre, medium, material – and scale. A group show in a small outbuilding at YSP packs in five young artists working in the region; beneath it, the park’s massive northern galleries and their surrounding gardens play host to a full-bore survey of the American welder-sculptor David Smith, which demands consideration of its own. You are unlikely, after seeing the festival’s 18 main artists and additional young associates, to feel closer to the core of what sculpture today is. The upshot to this is that, compared with the rigidly themed biennials of late, this tour through some very different conceptions of sculpture can be refreshingly picaresque, one episode after another. 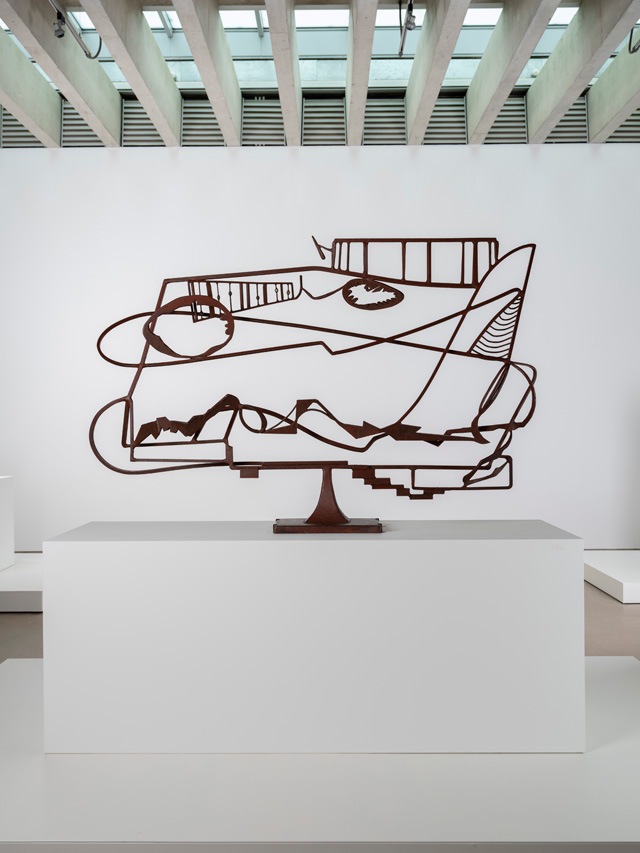 There is a clear narrative to the exhibitions’ conception. The YSI represents a chance to quadrangulate the four aforementioned sculpture institutions, which occupy a relatively compact patch of West Yorkshire (it should perhaps be called the Leeds and Wakefield Sculpture International). When it comes to sculpture, this area has a startling pedigree: Henry Moore and Barbara Hepworth both grew up around Wakefield, before meeting at Leeds College of Art. In 2018, the institutions’ curators asked (the otherwise absent) Phyllida Barlow to provide a serious of provocations. One of these – “sculpture is the most anthropological of art” – has been taken as exhibition’s thematic anchor, though one that drifts in and out of focus. 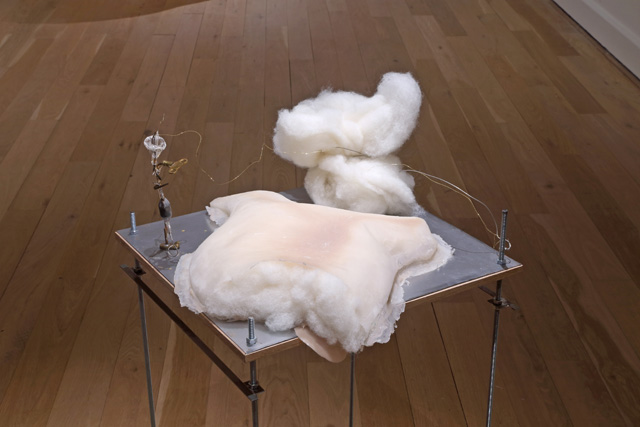 Polish-born photographer Joanna Piotrowska’s Shelters (2016-18) series, seen earlier this year at Tate Britain and now hanging at Leeds Art Gallery, are very much about human behaviour. Piotrowska coaxes people to form dens out of their possessions, in mimicry of both childhood games and the assemblages that homeless people construct to sleep in. The resulting photographs neatly illustrate the knife-edge between the child’s impulse to hide and the embattled adult’s quest for security. Less successful, though, are attempts to tie this to three abstract sculptures from the museum’s collection. Nearby, Japan’s Nobuko Tsuchiya has concocted a set of messy, blobby pieces from found objects and polymers, using the gallery as a temporary studio. At best, when they hit a balance between repulsion and warmth, they position the sculptor as a sort of post-apocalyptic scavenger, melding the remnants of a lost human civilisation into bizarre new tools. 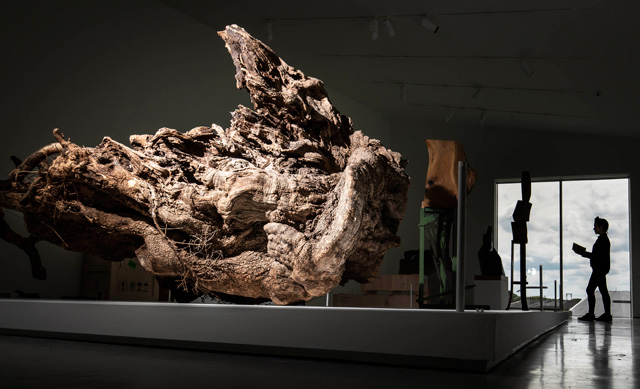 At the same venue, Woodwork: A Family Tree of Sculpture, the sensitively arranged exhibition-within-an-exhibition, draws on the art gallery’s particularly rich sculptural holdings to argue that wood represents a globe- and era- spanning material, and is thus the most anthropomorphic of sculptural substances. It is hard to disagree, of course, when you are presented with nothing to contrast it against. Over at the Hepworth, old hand Jimmie Durham’s Greek Fire (2012) is huge clump of mangled tree matter, a majestic hunk of nature transported from its context by human agency. Presented alongside works by Hepworth and Moore, it suggests sculpture as a reorganisation with the natural world. 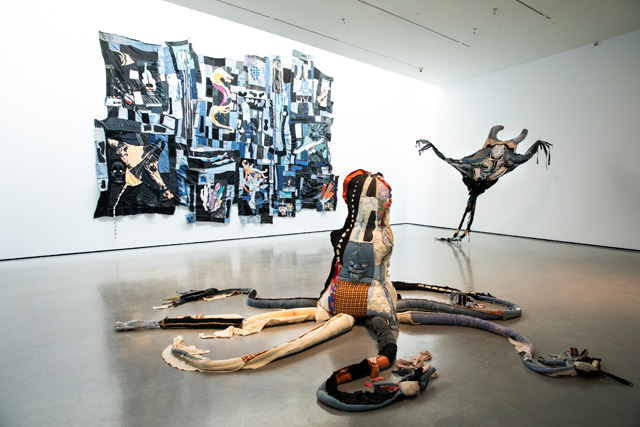 This thread is picked up by two younger artists at the museum. Canada’s Tau Lewis, who makes work from textile waste, posits the ocean as a site of myth-making, in particular by black communities. Her human-faced monsters seem to demand empathy. The Hebden Bridge-based Rosanne Robertson moulds sculptures from moorland stones, flappy things with more than a hint of human flesh about them. Pissing (2018), a video showing Robertson’s legs as she serenely urinates on a craggy rockface, has something of Ana Mendieta’s elision of the boundaries between animal and mineral. 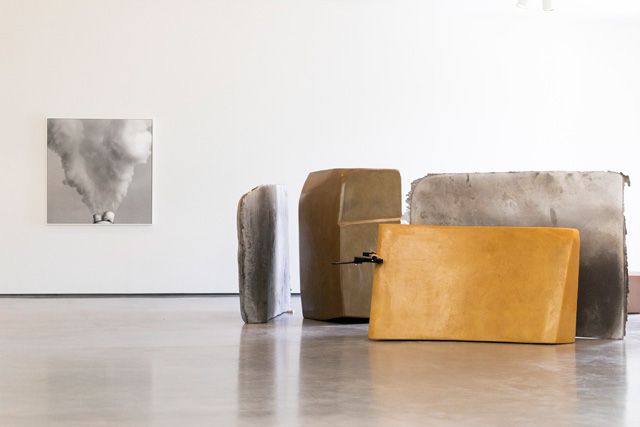 Maintainers (2018), a series by the Iranian-born sculptor Nairy Baghramian, look at the relationship between materials and volumes. Wax blocks, cork clumps and aluminium screens stand in delicate arrangement, sometimes touching and otherwise not. Positioned so that they interrupt your path across the gallery, they have a strangely sensorial nature. Circle round them, and they come to resemble the clustered landscapes of Giorgio de Chirico or Yves Tanguy. I have sometimes found Baghramian’s oft-feted pieces, such as her twirling, dripping worm-benches at Skulptur Projekte, faintly dry, but her work at the Hepworth has genuine heft. It might be the highpoint of the whole festival. 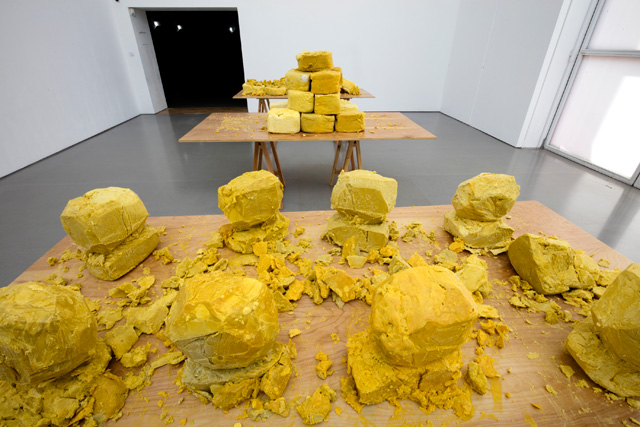 The other peak is at the Henry Moore Institute. Rashid Johnson’s Shea Butter Three Ways (2019) delves into the tactility of sculpture and the bond between sculptor and sculpted. His installation consists of almost exactly what you might expect. Heaps of shea butter – an African seed-based fat marketed in the west as a miraculous ingredient in skincare products – sit on three tables. On the first, Johnson has shaped it into abstracted busts; on the second, into minimalist blocks. The final section allows visitors to handle the pungent gloop themselves, squeezing into the very milk and butter of human kindness. It feels fantastic (although remember to wash your hands before posting the photos to Instagram). Johnson plays in the gap between the butter’s physicality and its myriad associations, from cooking fat to “skin superfood”. 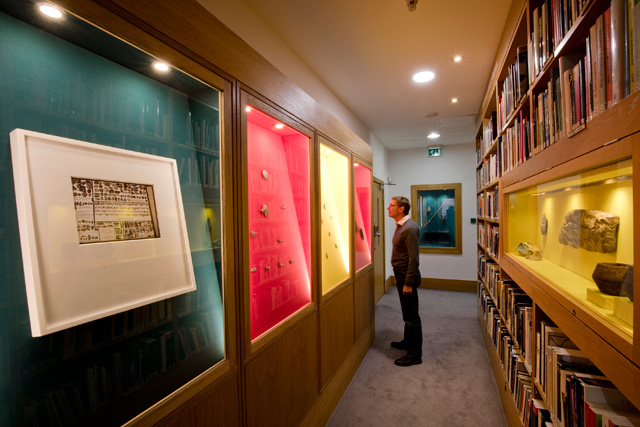 Sean Lynch, The Rise and Fall of Flint Jack, 2019. Courtesy of the artist; Ronchini, London; and Kevin Kavanagh, Dublin.

Meanwhile, in the institute’s library, the Irish artist Sean Lynch has united the objects of Flint Jack (real name Edward Simpson), a 19th-century geologist who sold dozens of fake fossils, Roman ceramics and flint tools to Britain’s museums. By fabricating imitations of heritage artefacts, Simpson was a sort of sculptor, remaking the forms of the ancient form anew. A window to a backstreet below shows a print of the forger working away, in one of the YSI’s few forays on to the streets of its host cities. “Planning permission has not been easy,” a representative tells me. 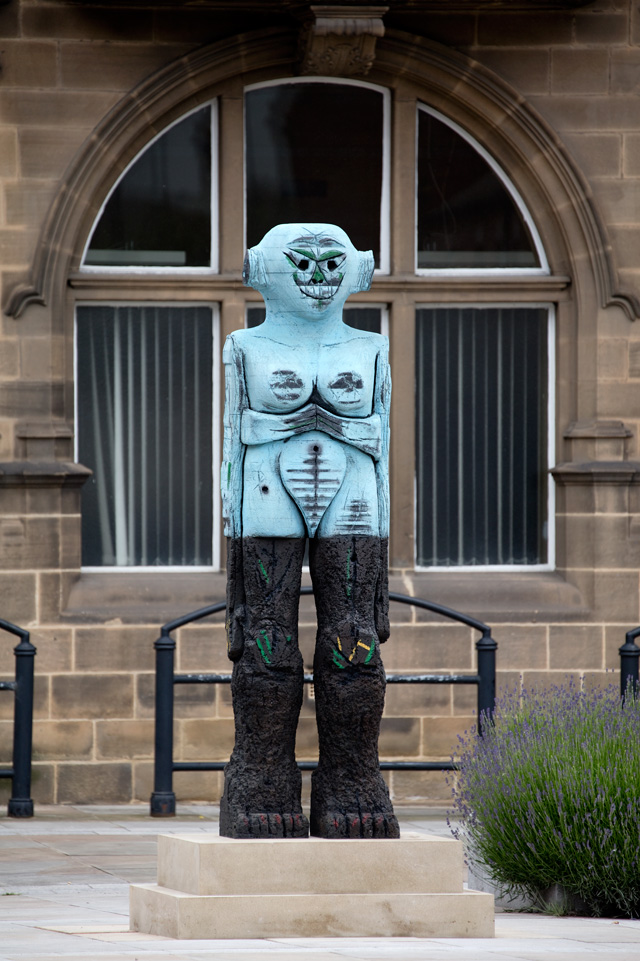 Nevertheless, an alien has landed in the centre of Wakefield. Huma Bhabha’s Receiver (2019) is a bronze titan, cast from cork and Styrofoam, which she has painted blue and brown. Androgynous, two-faced, both primal and extraterrestrial, it beams a mischievous grin at a neighbouring statue of Queen Victoria. In Leeds, Damien Hirst, who grew up in the city, has placed a skull-faced angel of death in a sumptuous fin-de-siècle arcade and an oversized anatomy model on the shopping street outside. Perhaps this pair’s brashness offers a marked contrast to the YSI’s more introspective tendencies. For me, though, they are blank. The only thing they interrogate is my patience. 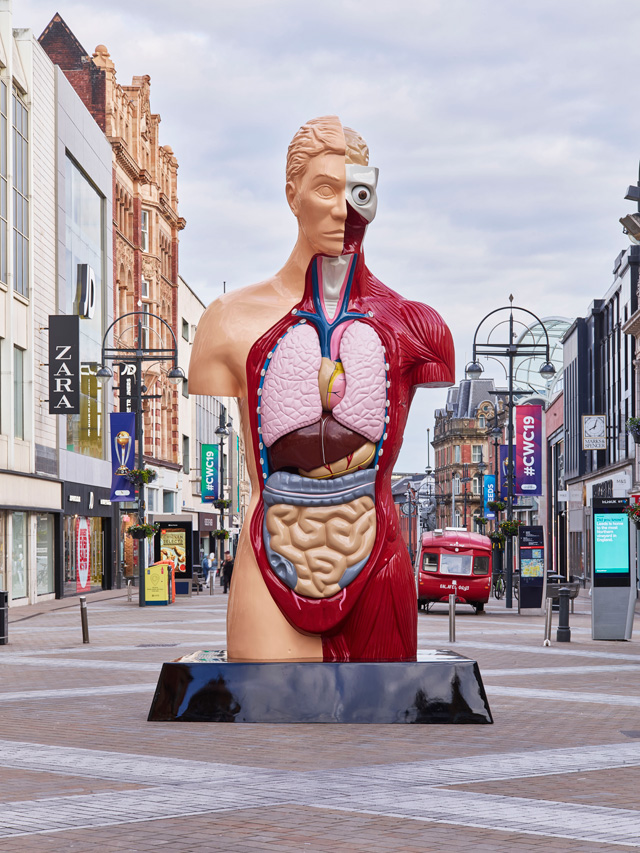 Hirst remains one of contemporary art’s few banner draws. Few should begrudge YSI’s conveners for placing him front and centre, though I would have liked to see him tempered by other public interventions (there are hopes to expand this aspect of the exhibition when it returns in 2023, as part of Leeds’ self-proclaimed Year of Culture). They are also among the few pieces whose form satisfies traditional notions of sculpture, or statuary, as mimicking human forms, anthropomorphic if not anthropological. But when placed alongside so much art that casts sculpture as a tactile, hands-on process, these studio-churned aberrations appear somehow less sculptural. And perhaps this – the artist as a shaper of material, whether natural resource or the human debris – is the closest thing we can find to a definition of the sculptor today.