With artificial environments, app-led innovations and a preponderance of site-specific video art, the fifth edition of this 10-yearly project broadens out ideas of public sculpture as never before 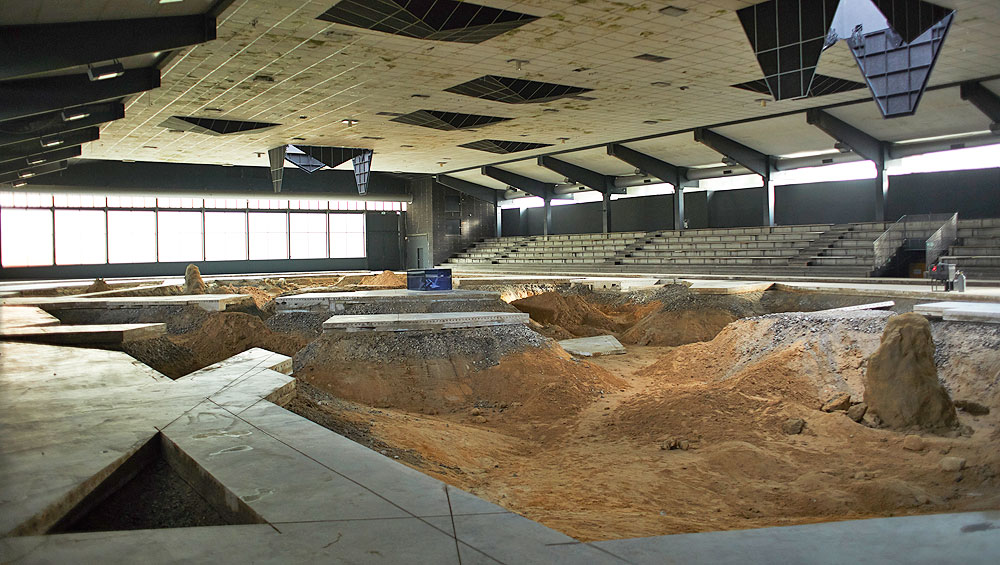 It was a dusky evening in the German city of Münster. Queuing up outside a recently abandoned ice-rink in the city’s northern peripheries, journalists clutched paper cups from the adjoining branch of Burger King. As the line doddered ahead and the door drew incrementally closer, the wan faces of those leaving appeared to register something between disappointment and blank-faced bafflement.

I was wrong: they had been stupefied. Pierre Huyghe’s After A Life Ahead (2017) is a piece of such scale and ambition that it is difficult to carve up into its constituent elements, but it is worth a try. Huyghe has excavated beneath the rink to create a walkable, desert-like landscape, flush with clefts and mounds. There are ponds, an aquarium, insects, algae, sea snails, glowing fish, hidden beehives and albino peacocks. Pyramidal structures on the ceiling open periodically to let in light, while a post-apocalyptic radiance streams in through a row of windows.

Sensors transmit algorithms concerning the living activity in the rink to an incubator containing a petri dish of cancer cells, which wax and wane with the climate’s vitality: a memento mori hanging over Huyghe’s brave new world. Using an app, visitors can see augmented-reality pyramids, which increase in number each time a cancer cell splits, and disappear when the ceiling opens. Each thing here is dependent on another: the pattern on the snails shells have been translated into a score, which in turn affects the appearance of the aquarium’s glass, which in turn triggers the light shafts. Small, seemingly insignificant changes can disrupt the lines we follow. It’s a simple point, stated in breathtaking fashion.

After ALife Aheadis the most spectacular piece in the fifth edition of Skulptur Projekte Münster (Sculpture Projects Münster), as well as the most expensive, funded largely by Huyghe’s four galleries for around €800,000. But it is in no way the sole headliner. Founder-director Kasper König and his curators Britta Peters and Marianne Wagner have cultivated a diverse programme. Those visiting Münster after exploring the earnest, worthy Documenta 14 will find much here to lighten their mood.

The Skulptur Projekte was founded in 1977 by König and Klaus Bussmann, in response to a local outcry over proposals to install an abstract George Rickey work. What began as a provincial provocation has become the most respected 10-yearly event in art. Artists submit bids for sculptural works, which are ratified or rejected by the curators. Successful entrants are placed in the city for a summer, after which municipal authorities and the local LWL museum (Westphalian state museum for art and cultural history) customarily purchase several works for posterity. Around 40 such remnants of previous editions can be seen around Münster, a Cambridge-like university town.

The abundance of contemporary art, postwar public statuary and medieval monuments makes Münster a site of unexpected marvels. Descend into the public toilets under the Domplatz and you will find a decorative scheme by Hans-Peter Feldmann from 2007; look at the tower of the Lambertikirche at night and you will see three lanterns installed in 1987 by Lothar Baumgarten, each illuminating one of the cages in which the brutalised corpses of Anabaptist rebels were exhibited in 1536.

As both of these examples suggest, the Skulptur Projekte does not confine itself to public sculpture in its most conventional form, and this year’s iteration casts a wide net like never before. Nevertheless, there are some excellent pieces that would have fitted well on earlier occasions. Michael Dean’s Tender Tender (2017) is a late capitalist hellscape. Dean has sheathed the LWL museum’s historic courtyard in plastic sheeting, and filled it with spindly cactus-like structures bearing grotesque sprouting fingers, plastic bags, police tape bearing the phrase “fucksake”, congealed concrete rocks, pages from nonsense plays and further assorted debris. The city is reimagined as an ungodly mess.

The New York painter Nicole Eisenman’s Sketch for a Fountain (2017) is a witty depiction of queer harmony, with plaster figures that will slowly decompose in the elements. Impermanence is a recurring topic this time around: Italy’s Lara Favaretto has produced another of her Momentary Monuments, which will be ceremonially destroyed at the end of the Projekte. By contrast, the enigmatic Nuclear Temple (2017), by local favourite Thomas Schütte, is a testament to the fleetingness of civilisation, and feels like the work most likely to remain in situ, along with Hervé Youmbi’s colourful, culture-crossing totems, Les Masques Célèstes (2017), which hang in a former graveyard.

There are several pieces that aim to augment the urban experience. Oscar Tuazon’s concrete Burn the Formwork (2017) is a monolithic piece of sculptural brutalism with a fire that serves those requiring heat, while Ayşe Erkmen’s On Water (2017) allows visitors to walk across the Stadthafen harbour on shipping containers sunk just enough to create the impression of walking on the water.

But many of this Sculptur Projekte’s most intriguing pieces are those that focus on the public side of the brief, rather than the sculptural. At the LWL, Gregor Schneider has crafted another of his disquieting apartments; the home of N Schmidt (2017) feels like the scene of a horrific crime, as well as a victim of bad plumbing. In a plot outside the city, Jeremy Deller has collected the journals he gave to allotment associations during the 2007 Projekte. The resultant work, Speak to the Earth and It Will Tell You (2007-17), is a touching alternative social history of the past decade, focused on plant cultivation and provincial gatherings. Alexandra Pirici’s Leaking Territories (2017), at the hall in which the Peace of Munster was signed in 1648, opens the gates to performance art, although its Documenta-fixated dialogues and a cappella singalongs are more than a little wearying.

New technologies emerge as a major hallmark of this year’s offering. The German artist Andreas Bunte’s Laboratory Life (2017) is accessed through a series of QR codes on posters around town. Scan one using your smartphone, and you will be presented with a short film showing an everyday activity transposed into the controlled environment of a lab. Look past the novelty, and this is a fascinating window into diverse topics: how we engage with an urban environment, how one performs an action correctly, and how the actor in any given process is determined.

Another valorising use of technology is the Japan-born, New York-based Ei Arakawa’s Harsh Citation, Harsh Pastoral, Harsh Münster (2017), sited at the southern tip of Lake Aa. Seven fabric panels display jittering, pixelated LED versions of paintings by artists as diverse as Joan Mitchell and Gustave Courbet, which take turns to sing specially composed songs about themselves. Delight overcomes any reservations about the piece’s tweeness.

By contrast, Hito Steyerl’s HellYeahWeFuckDie (2017) substitutes tired dotcom aesthetics for real engagement with its medium. Set in the filmset futurism of the LBS savings bank HQ, its impressive assemblage of corrugated metal panels and slender black pipes is undercut by a fatuous three-video installation of digitally generated figures fighting. Viewers can watch on benches aglow with the titular words, allegedly the five most frequently used terms in contemporary English chart music. Glib, voguish and puddle-deep, it is like an exhibition curated by i-D magazine. From such a venerated figure, this is weak stuff.

Otherwise, video art is in rude health, and makes use of some of the city’s most curious locations, where the site becomes part of the piece. Bárbara Wagner and Benjamin de Burca, who live and work in Recife, Brazil, chose the impossibly kitschy nightclub Elephant Lounge for their video Bye Bye Deutschland! Eine Lebensmelodie [Bye Bye Germany! A Melody of Life] (2017), following local imitators of famed schlager musicians. The Argentinian artist Mika Rottenberg’s Cosmic Generator (2017) sits in a former Asian supermarket, and weaves an audiovisual fantasia around the tale of secret tunnels hidden in shops between the Mexico-US border towns Mexicali and Calexico. And although Koki Tanaka’s Provisional Studies: Workshop #7 (2017) is presented stolidly, the idea – assemble eight Münster residents of different origins and get them to discuss, after Roland Barthes, “how to live together” – is a fascinating one that yields some interesting discourses.

This edition’s most entertaining video work, Gerard Byrne’s In Our Time (2017), is hidden in the basement piano room of the central public library. Straddled by two speakers, it offers copious footage of an early 80s Californian oldies radio station. A DJ, who announces himself under a series of different names, plays a bevy of 60s classics between period-specific news announcements, weather and travel information and advertisements. The camera strays around the studio’s ample cassette collection, pores over the recording equipment and shows an assistant passing the DJ his mug. Sounds and sights build up to map the studio space meticulously.

There are simple pleasures to be had in the jukebox variety and the comedy of repetition. But there is a lot else besides. The DJ is animated during voiceovers, yet jaded and worn down once he leaves his performative space. His repeated references to the hour of the day, matched with those of the contemporary viewer, play with time in the manner previously traced by Christian Marclay, while the assemblage of visual impressions and period-specificity evoke the work of Stan Douglas. It could appear rather frivolous at a time when so much art is trying to make sense of the world’s present-day travails, but In Our Time mesmerises such that, when sitting before it, those problems hardly seem to matter.

Compared with this, some of the more conventional sculptures, such as Nairy Baghramian’s squiggly Privileged Points (2017) and Justin Matherly’s Nietzsche’s Rock (2017), are a little less individually exciting. But when dropped around the city as artefacts to discover, they contribute to one of the most surprising and pleasurable experiences in contemporary art. The openness of this Skulptur Projekte, along with the sense that it engages locals and visitors alike, is as compelling as its role as a 10-yearly checkup on contemporary public art. Take your time, savour the art and enjoy Münster.