Hans Holbein the Younger was an artist and painter by profession, and a humanist intellectual by inclination and persuasion. He grew up in Augsburg in southern Germany where the Italian Renaissance was beginning to be perceived, spreading over the border as a formative influence and as a cause for cultural enquiry. In 1519, Hans and his younger brother Ambrosius soon joined the painters' guild in Basel, as a channel of advancement for their careers after visits to Lucerne in both 1517 and 1519.

In Basel, Holbein was drawn into an intellectual milieu of artists and literati, within a largely humanist culture. Holbein was quick to get to know Erasmus and, within four years, had completed two portraits of this central figure. Branching out, he visited France in 1524, where it is thought he came across Jean Clouet, another influential figure in terms of his work in painting and drawing. He then came north, and it was Erasmus who provided introductory letters both to Pieter Gillis in Antwerp, and then more importantly, to Sir Thomas More in London. More became Holbein’s chief mentor and adviser. Yet he wrote pessimistically from England even then, to Erasmus, saying that Holbein might not find the prospect and potential of England as rewarding as he might hope, a reflection on the increasingly troubled situation at Court in London. More's pessimism was, it turned out, well justified, and matters would deteriorate to his own personal cost.

In London today, it is interesting to find major exhibitions on Hans Holbein, court painter to the Tudor king, and on Velázquez, court painter to the Escorial in Spain. The two narratives bear some comparison, although Velázquez had an easier ride over a century later and was more deeply embedded in a worldly European centre, whereas England in the 16th century still showed the raw brutality of the Tudors below a veneer of imported Renaissance manners and aspirations. It was inevitable that, for advancement, both painters should display skills in a wide range of portraiture. But it was the link with Sir Thomas More that was as crucial to Holbein as approval by the Spanish court would be to Velázquez.

The superb and ambitious family group portrait of the More family (which since the 18th century has only existed through copies made) had been executed by Holbein during his first English visit (1526-28). The now Basel-based pen and ink preparatory drawing for this work shows what an ambitious project it was, reflected in the Basel work. It was sent to Erasmus as a present. In 1528, Holbein was back in Basel with his 'first' family and acquired a large mansion on the Rhine to settle them. In 1532, he was back in London, however, perhaps aware that More was already sailing dangerously close to the wind of Henry VIII's disfavour. Sure enough, More was executed within two years for opposing the king's divorce. Holbein survived his association with More and, by 1537, he had become the royal portraitist, a post carrying a fixed stipend. Perhaps it was thought at court that mere tradesmen (as painters were ranked) would not be implicated directly in acts of treason and treachery. Holbein survived, by footwork and diplomacy (as More would have expected him to), and now became an important accoutrement in the game of self-esteem and Renaissance aggrandisement that England was seeking to achieve with success, albeit increasingly wealthy, but nonetheless provincial in Renaissance terms. Holbein's paintings enabled the English to see themselves as European participants, no less, regardless of the historic breach with Rome caused by the King for his own devices.

The masterworks here, in the absence of the destroyed More family group, are Holbein's portraits, first of Henry VIII and second of Christina of Denmark. Henry VIII (the only surviving version of this task) reveals, as captured by Holbein, a trace of that savagery that secured the English throne for the Tudors, not concealed by the civilised demeanour and fine cloth. In Christina, Holbein leaves us with a haunting but beautiful portrait: an astute lady, already widowed as Duchess of Milan, and worldly wise enough to avoid betrothal with Henry: her portrait by Holbein captivated Henry when he saw it, to no avail. She just 'wasn't available', as Scandinavian women with their own minds have always said when pressed. A further Holbein masterwork has to be the portrait of young Anne Lovell. She is full of a confident composure. Even the red squirrel she holds, and calmly perching bird, convey this sense of peace. Anne's simple cap, which turns out on closer inspection to be of ermine, seems to frame a quintessential English beauty, for all her apparent modesty. She gives away little of her innermost thought, in true Renaissance mode. Holbein was most fulfilled when portraying English females. Indeed, he established a second, English family after his return, and took English nationality.

The ruthless executions of Sir Thomas More and also Cardinal/Bishop John Fisher of Rochester tells us, through their portraits, of the threatened context of any well-intentioned religious life and its prospect in Henry's England. Soon came the Dissolution of the Monasteries, more for property gain than as a matter of principle. The various gentry and nobility portrayed by More, such as Sir John Godsalve, or the Earl of Surrey, bear out this watchful expression, never quite relaxing their guard in all the panoply. But they, together with the Crown, reaped an inconceivable bonus as a result, to those who kept in favour with Thomas Cromwell (his portrait absent here) or his sovereign. 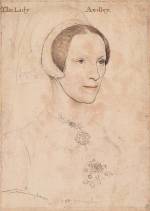 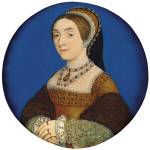 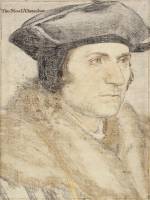 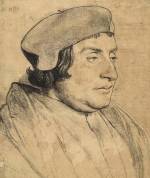 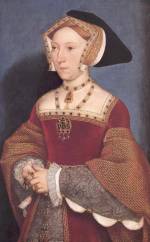 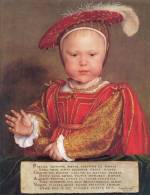